Bassam Kaurdali creator of the ManCandy model,Â  Rig and DVD Rigging tutorial created a visual for new type of Wind Turbine which is featured on MIT's Technology Review site.

"All visuals are made in blender, soundtrack (music) is by Jan Morgenstern, Voiceover is rather hurriedly recorded by me, voice is Fateh Slavitsky. I did all the visual work in blender as I said; initially I imported a model as an STL from pro-E, but it was very high poly and messy, so I re-topo'd it in blender to a lower poly model that I could just subsurf. Explosion of the windmill is based on a popular (at the time) viral vid on youtube of a real turbine falling apart. Used the explosion modifier, which at the time had a bug that prevented motion blur. the colored flowlines are blender particles on shadeless normal blended spheres (no light) and use ton's awesome curved vector motion blur and some compositor effect. The whole thing is edited in the blender compositor. The credit scroll
is a 3D scene." 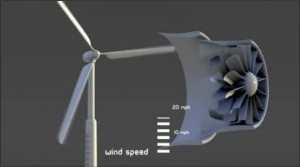