You've rendered your scene and everything looks great! But, of course, there's usually more work to be done to really push the rendered results to something that can truly be called "finished". The subject of post-processing could fill volumes of books and many online resources often leave you with more questions than answers. Here's a tutorial on Tone and Gamma Corrections that should help to answer some of those questions.

This application-independent tutorial, created by Yves Poissant, explains why tone and gamma corrections of a 3D CG render are necessary and how to take this into consideration in all stages of its image production.

Tone and Gamma correction is a very intricate issue. There is a fundamentally simple solution but because the issue is intricate, people don't usually inderstand it and don't want to apply it. Applying this simple solution, however, is one very important step toward getting realistic 3D renders. Every major studio knows that. They have lighting specialists that take care of that aspect for everybody working at every stage of producing a film and that includes FX and CG. But 3D CG artists are left to their own devices, trying to figure it by themselves.

There are a few rare tutorials about this issue on the web. Type "Linear workflow" in google to get a few samples. Invariably, they all seem to generate more questions than they answer. This is my experience too when I discussed the issue on the Hash Inc forum. So I tried to write this tutorial in a very systematic way, trying to answer the questions I saw in my discussions as I go. 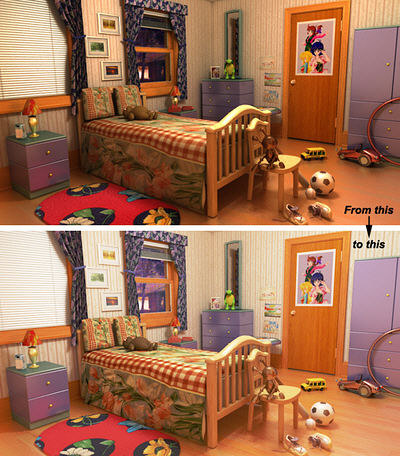 You can find the tutorial here, on Yves Poissant's website.

UPDATE: Further discussion and testing can be found at this blenderartists.org discussion thread.