Recently, Jason â€œGrooâ€ Van Gumster (Fweeb) announced on BA that he had been working with cmiVFX on a 3 hour training DVD for Blender entitled â€œAdvanced Fluid Dynamics In Blender.â€ Thanks to cmiVFX, BlenderNation got a look at the DVD. Read on to see if we help you answer the question, at $60 USD, is the video worth it?

First, I should at least mention that cmiVFX picked the right man for the job. I saw Groo do several presentations on Blender's fluids at Siggraph 06 and he brought enough enthusiasm to it that it became a highlighted feature getting lots of questions from passers-by. Second, I'll mention that the video and audio quality is great and it's what you would expect from a professionally made training DVD. 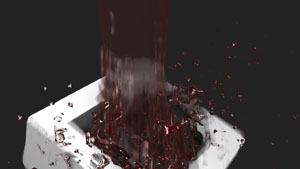 This DVD is titled appropriately as it is advanced. It doesn't hold your hand every step of the way nor does it describe every button (we have wiki's for that). The DVD doesn't cover every Blender fluid aspect either, such as the fluid type Particle (with drop, flow, and tracer options), which may leave some people still wondering what mysteries are still locked in these settings. What the DVD does do is show a series of situations that fluids can be used, how they can be set up, and how to tweak setting to get it to look right. It ensures that every successive chapter expands on the previous chapter's lesson so that by the end you become comfortable with handling various types of simulations. 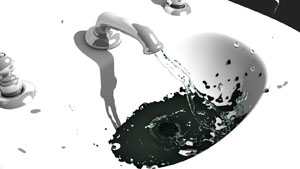 As good as the DVD is, there are a few things lacking. A key weakness of this DVD is that the video itself is in quicktime which mean you have to have the ability to play quicktime files, but it also means that there is no menu system to navigate between chapters. However being quicktime, a much higher resolution can be expected as well as the ability to play it on any OS. The video also assumes that the viewer is already familiar with features such as the compositor, action editor, and render layers, which the lessons utilize on occasion. This shouldn't be a big problem though as the DVD seems geared to Blender users who shouldn't be confused in using all that Blender has to offer. Though for these same Blender users, the final renders of each chapter may seem less than stellar since many of us are accustomed to amazing Blender results the likes of which can be seen from Mike Pan (mpan3). 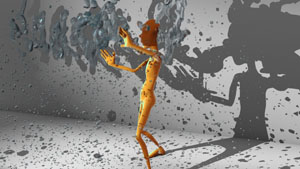 The DVD is broken up into 12 chapters which I will list here. The product site does the chapters better justice since they have screen shots and full descriptions.

Each chapter reveals a little bit more about Blender's fluids and each not only shows you how to do the demonstrated task, but also gets you to start using fluids in ways that aren't exactly the standard sim of an icosphere fluid dropping in a box (which is the simulation I'm sure we've all run based on Nils' fluid wiki page). Two chapters in particular are a must see: Faking Smoke and the Destroying a City. Both are great examples of creative uses of Blender's fluid settings and they get you thinking about using the fluid capabilities available to produce very unique results. 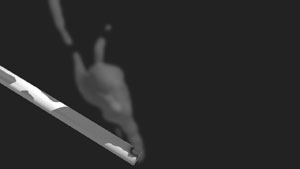 One thing that isn't mentioned, but should be irrelevant in a few weeks, is that the DVD utilizes a CVS version of Blender 2.42a. Specifically a version built after fluids creator Nils Thuerey upgraded Blender's fluid system. This version shows a few more options (e.g. Surface Subdiv for the domain) than a release version of 2.42a, so this might lead to confusion if the viewer of the video happens to purchase the DVD from it's release to the official 2.43 release. The DVD also comes with the project files that the DVD uses in each chapter which is great not only to have the result on hand to study, but also to manipulate to further understand the intricacies of fluid simulation. Of course, as with all .blend files with fluids, you need to bake the fluids in order to see the results, and given the DVD's more complicated scenes, that might take quite a long time. 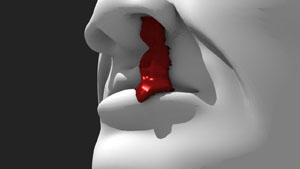 So if you are looking to expand your understanding of fluids and are looking for new ways to use them in you projects (professional or otherwise), you can find the DVD at cmiVFX for $60 USD (not including shipping). As for answering the big question on whether it's worth the $60 dollars, though it's priced a little steep for what you get, this is definitely one of the best Blender training videos you can get at moment. Anyone who is working professionally with Blender and fluids will definitely want to get his hands on this disc.

*Full Disclosure: BlenderNation did not receive, nor will receive, any compensation for this review.