During Siggraph 2006, Mark Puttnam (who along with Bob Holcomb, Martin and Dave was keeping an eye on all the Linux machines) conducted the following interview with several Blender notables. The first was Andy Goralczyk aka @ndy.

What do you think about the open source movement and when did you start using open source tools?

I started using Blender around 2000, mainly just for fun and to get me started into computer graphics. Before that I mainly did drawing and some digital 2D work. Oh well, you can't really consider that being "work", I was about 15 years old! Later I began to use it more seriously, doing quite a few short movies and still images. I lived through the transformation of Blender from a free-to-use closed source application into open source. That kinda was a wakeup call for me, and I was getting more and more interested in the open source movement as a whole. Now I try to build my main graphics pipeline around open source tools such as Blender and GIMP. It is just wonderful to see how people from all around the world come together contributing to the success of each project. I guess that's what makes open source so attractive to me, it's driven by people and their passions, not by money. (Of course money can also be a passion for some people, but that's another story) 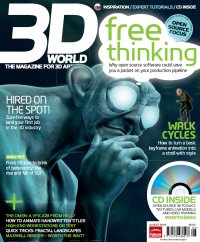 One of the really big advantages is its speed. If you are new to blender the interface kinda strikes you down. But in fact it is really a big plus. It aids you in doing your project quickly and efficiently. I find this speed necessary if it comes down to completing your project under extreme time pressures. Subdivision surface modeling is one of my favorites, I really love the modeling tools. And weirdly enough I also like UV unwrapping! Blender makes it so simple to unwrap any model that you can actually enjoy that process! Of course I'm a big fan of the compositing tools we developed over the course of Elephants Dream. I guess Blender is just one big nifty and useful tool! There is so much connected to it, that I could only touch the surface so far. I definitely want to check out other areas of Blender as well.

I think when it comes to producing elaborate animations and still images Blender has a pretty complete feature set already. There's a few rough edges, but alltogether Blender is pretty much up to par with commercial packages. Of course there's every nitpicker's favourite catchphrases like Sub Surface Scattering, Micropoly Displacement, Global Illumination and whatnot. I'm not saying those aren't useful and valid tools, but I don't think they're crucial when it comes to producing artwork.
However, I do understand that developers have their own goals and priorities. It's not really up to me to make requests that keep them from doing their work.

Right now I really think Blender needs to streamline its interface more. Buttons have to be rearranged, certain workflows need to read more clearly to the user, and so on. After the whole development craze of the past years, things that were already quite messy got a bit over the top. But since that's exactly what's being worked on right now, I can't complain. And when I look at the progress Blender made since it got open source, it becomes clear that it's only a matter of time till the rest of our feature dreams come true!

I use GIMP in combination with a Wacom Intuos 3 tablet for textures and post processing. I use about 50% each to get my work done. I use Inkscape for logos, fonts and other vector work. For version control and backup I just started to use Subversion. I don't know if it's exactly production work, but my main browser is Firefox of course. For Emails I use Thunderbird and all writing is done in AbiWord.
Ubuntu Linux and Windows XP share each about half of the operating system workload. Windows because I am extremely lazy and often want things to just-work out of the box. Ubuntu because GIMP and Blender run extremely fast and stable on Linux and sometimes it just-works out of the box, too! ;)

Which of the following are you most interested in (a)Modelling (b) Animation (c) Compositing (d) Rendering (e) Rigging (f) Game-Engine?

They're all pretty interesting! I am hoping to get into the game engine a little more in the future since I am beginning to study media arts very soon. It would be interesting do more work in the real-time area. Subdivision surface modeling is my all time favourite and of course we all have to render at some point! Compositing and post processing are often underrated when it comes to giving an image its final touches. Since I'm coming from a 2D background this is actually one of the most attractive parts for me. An image is never finished after rendering; I consider rendering as a way to get in my raw ingredients so I can start cooking. :) Rigging is a necessary evil, I'd lie if I said that I enjoyed it. But it's interesting nevertheless. Since the whole animation system was rewritten and extended, I found it to be a lot easier. Recently I began to learn character animation more seriously.

As a well versed Blender user and some with project experience using Blender, what advice do you have someone who has just been introduced to Blender?Do your own thing and don't let anything stop you! Blender is just a tool like any other, and it takes time to learn it. Practice, do research and look for reference where you need it. The Blender community has some of the most helpful people you can ever find. If you're stuck, don't hesitate to ask, either in the IRC chat or the blenderartists.org site. Many people are putting a lot of effort into writing documentation and tutorials, can't thank them enough for that. So, please read the online documentation, it is there for a reason! Oh, and I don't think I have to tell you about this great site called Blendernation, since you're most likely browsing it right now! :)

Talk about some of your projects both current and future?

My personal projects are on kind of on hold right now since I've got so many things in my head right now. University and commercial work keep me pretty busy right now. Also my site is dragging behind - sorry for that! Of course I'm always looking for inspiration and new ideas. So a still image could pop up any minute. I don't have that much control over it. (And only about 10% of the stuff I make gets published anyways. Most of it ends up on my ever-growing project graveyard.)
I actually have several short movies in the works right now. I am not sure if I can finish them as they are pretty complicated.

What would you like to read about blender in the media?I think many people are not aware that Blender is used quite a bit in the commercial industry. There is in fact a large userbase of people who use Blender for professional work, ads, movies and TV stuff. They are a minority still, and you kinda have to find out how to pick them from the crowds. So it would be really cool to read more about these people and their everyday work with Blender. It's surprising that many people, even its own users, think Blender is purely a hobbyist tool.

Please share some of the wonderful experiences when working on Elephants Dream?

Heh, that one's a bit difficult, since the whole project has been a wonderful experience! Well, where do I start? When we all got together for the first time the whole task seemed a bit overwhelming. I mean, a short movie? Six people with zero experience in the movie industry? Thousands of people with the highest expectations? Looking back at it, it's kinda surprising how I could sleep at all ;)

The level of motivation of my fellow orangers was just astounding, and that was really helpful in many ways. The long story and planning phase was really cool. Lots of discussions on carpet floor, beanbags, drinks, ideas, ink and paper. It was the most creative part of the entire project. We were getting along with each other very well. It was like a jump into cold water when we realised that we had to shorten the story in order to finish. I guess from that point, everything seemed like a compromise. The scriptwriter was not helping out as he should, time was getting short, the hours were getting longer, and so on... This was a tough time, especially for Bassam. I can't give him enough credit for putting all his energy into Elephants Dream, so we still ended up with an absolutely unique and compelling story.

As time passed by, the working hours were getting really insane. Not only for the animators, but also for Matt and me, who actually had to texture, light, composite and render the whole thing. Of course that can be pretty unhealthy, but also fun! After 15 hours of blending and a coffee consumption that would drive any doctor mad, we still managed to have fun, listen to music, throw around random stuff and enjoy the work. That's also the time when we discovered that scarfs can be the most useful asset in a digital production (closely followed by coffee of course and... oh! computers). It can be really useful when crunchtime hits you and you need a way to protect yourself from hostile outside influences such as the icy cold of an old dutch building, or annoying making-of people asking for interviews, or producers asking where the heck their movie is. Do not go anywhere without a protective scarf. If you don't have one you might as well use a towel.

Oh well, the list of little stories and fun anecdotes is long. I guess the best part was actually having finished the whole piece and being able to watch it on the big screen. And the most important thing is that I still enjoy watching it! I think it's very important to make something you actually like.

The great animation work by Bassam, Lee and Basse. Matt's super precise texturing, lighting and compositing and Toni's tech work... absolutely amazing how it all came together! To see that all the hard work actually paid off, and what a huge success this project came to be was an enormous relief.