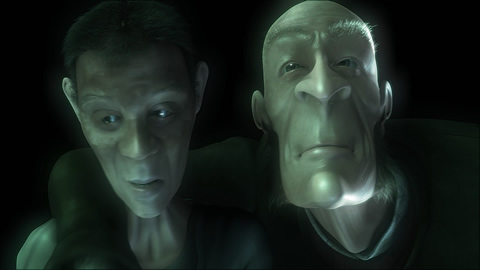 A new phenomena is making its debut in the movie industry today; the world's first Open Movie has been released on the internet.

Ton Roosendaal has once again relentlessly turned a vision into reality: the dream to prove the power of Open Source software by creating a movie that could match itself with any commercial product.

Not only would the movie be made using Open Source software, but the contents themselves were to be Open as well: all of the digital assets and production files are released under a Creative Commons license, allowing everyone to see how the movie was made, make changes to it and create a new, derived movie. This will be an invaluable archive not only for the Blender community, but for the 3D community in general.

Six of the most brilliant Blender users from all over the world were invited to work together with him at Montevideo/Time Based Arts in Amsterdam, the Netherlands for seven months.

The impressive music and sound effects were produced by Jan Morgenstern, a German composer who had worked with the Blender Foundation before.

In those seven months, they started from scratch: even the script still had to be written. The story evolved from an idea into a nine and a half minutes long, dark, compelling tale that will have you watch it again and again and that proves beyond any doubt that Blender is a movie-capable professional 3D application.

And it didn't end there. Ton aimed to recreate the setting that Blender was born in: a small animation studio where the software developer was in constant touch with the artists, building the tools that they needed and continually improving the software as the project went along. With Ton in the lead and aided by several international Blender developers, Blender has seen an incredible boost in features (see the complete overview) which will all be available in the upcoming 2.42 release.

Rendering such a movie on film resolution is no small task: thankfully Bowie State University donated access to XSeed, their cluster of 240 Dual-core Xserves to render the movie. XSeed took over 125 days to render the movie, using up to 2.8GB of memory to render a single frame. With each high resolution image consisting of up to 9 different layers, terabytes of data were flying across the globe and pouring into the Amsterdam studio.

This project was partly paid for by the presales of the project DVD that was created by Joeri Kassenaar; all of the project's files as well as some bonus material is bundled on it.

Even now that the files are all available on the internet, it is still worthwhile to purchase the DVD as Ton has already hinted that he is already contemplating his next movie project.

History is being made today and I am convinced that Ton has set a trend that many others will follow.

I have nothing but the deepest respect for the team members and this project has made me (once again) truly proud to be a member of this community.