When I was playing with blogging for the first time in January I wrote '..we'll see where this goes :-)'. Well, it certainly went somewhere! Here's a short overview of where we are today.

What is it that we do? Someone has commented that BlenderNation is 'defragmenting the Blender community'. He hit the nail on the head: there is *so* much going on in the Blender community but you had to keep track of lots of sites to be able to see it. BlenderNation aims to solve this and in the process, to provide a library where you can find the most important Blender resources on the web. We have no ambitions to add community features such as forums or public galleries: other sites already provide those and they're doing a great job at it. We collect and report. Nothing more, nothing less.

The project is by far surpassing my initial expectations: within three months, we've reached the point where we are being read by over 2500 people every day. Our RSS feed has 500 subscribers on average. 70% of you are 'returning visitors'.

I started off alone, but was quickly joined by four other authors. Let me introduce them to you:

And then of course there's me:

If you have a passion for writing about Blender and you'd like to join the team, then just contact us. We don't bite! (well, most of the time we don't). 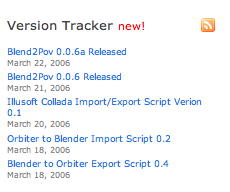 All the RSS feeds are now routed through Feedburner.com. I visited a presentation by their founder a few weeks ago and decided to give it a try. Feedburner takes a lot of load off of our server: an RSS client will typically reload a feed every 15-30 minutes and with our current number of RSS subscribers (around 500, see the nifty Feedburner icon on the homepage) that could result in around 25,000 pageviews a day.. As a bonus, they provide nice usage statistics and they give me another toy to play with!

Apart from continuing to provide you with the best Blender news, there are a few things that we are planning:

Your feedback
So, what do YOU think of how we're doing so far? We'd like to get some feedback on the things that you like and what you think stinks. As long as we don't get feedback we'll just keep doing the things we do because, well, it makes us happy :)