Hi there! My name is Pau Homs, and I’m a CG lighter and 3D generalist. I discovered Blender while I was in highschool five years ago, and I was instantly convinced that I wanted to lean my life towards 3D. Flashforward to today, I recently graduated with an Animation and VFX degree and now, I’m making my break in the animation industry.

This story begins when I decided to participate on the #Bcon22Challenge. The objective was to reimagine a Blender splash screen as a Sketchfab viewer, so it’s no wonder that the biggest inspiration was the very artwork I tried to reimagine: “Fishy Cat” by Manu Järvinen.

I find cute characters like this funny when turned into something dark, so I wanted to transform “Fishy Cat” into a terrifying scene. It would be this image but as seen by an actual tied-up fish that’s scared of the cutest thing ever. When I started the project, I didn’t have a clear idea of where the project was headed in terms of style, but it ended up being a mixture of Alberto Mielgo's painterly, grungy rendering and WB cartoons’ character design. 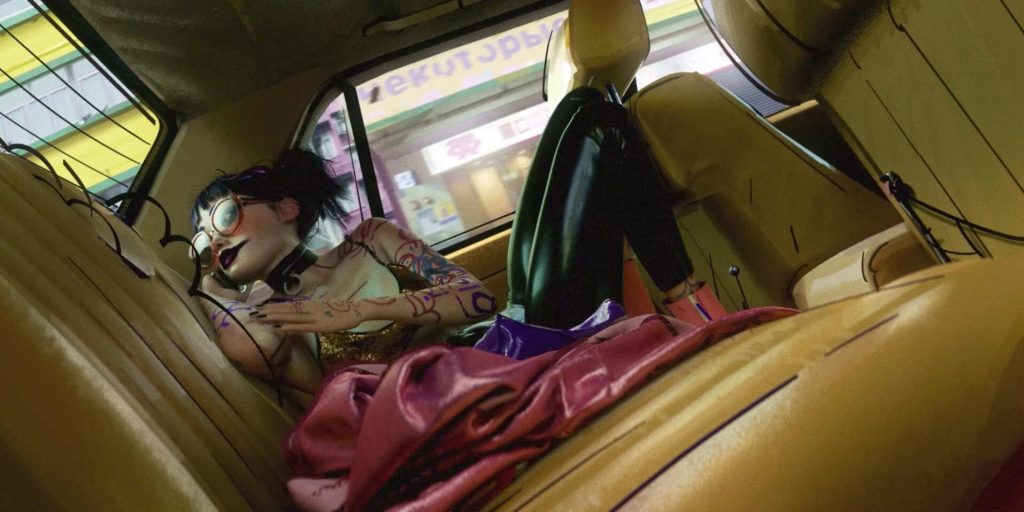 I started by making some drawings of scary cats. I found myself laughing while drawing, which usually tells me that the idea is worth it.  It kinda feels ridiculous but it’s a nice moment to see your idea starting to come to life. 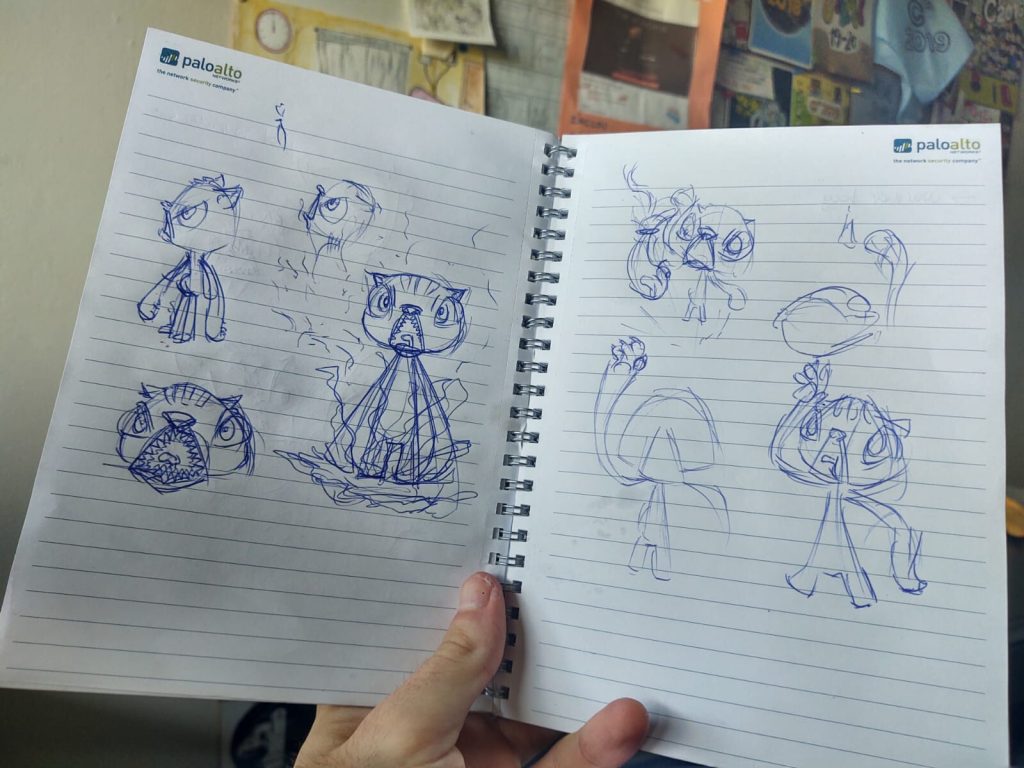 And then made a final concept in Krita, which is an amazing open-source painting app. The idea was to make the cat super threatening, have it be fire, and make everything to be surrounded by black.

Final concept art for my reimagining of the original artwork.

After that, it was on to modeling. The process would be sculpting, then retopology, and then textures. I wanted everything to have simple but hard shapes to empathize the fear that the fish is feeling. Aside from that, I was hoping I would have a style that worked along the way. 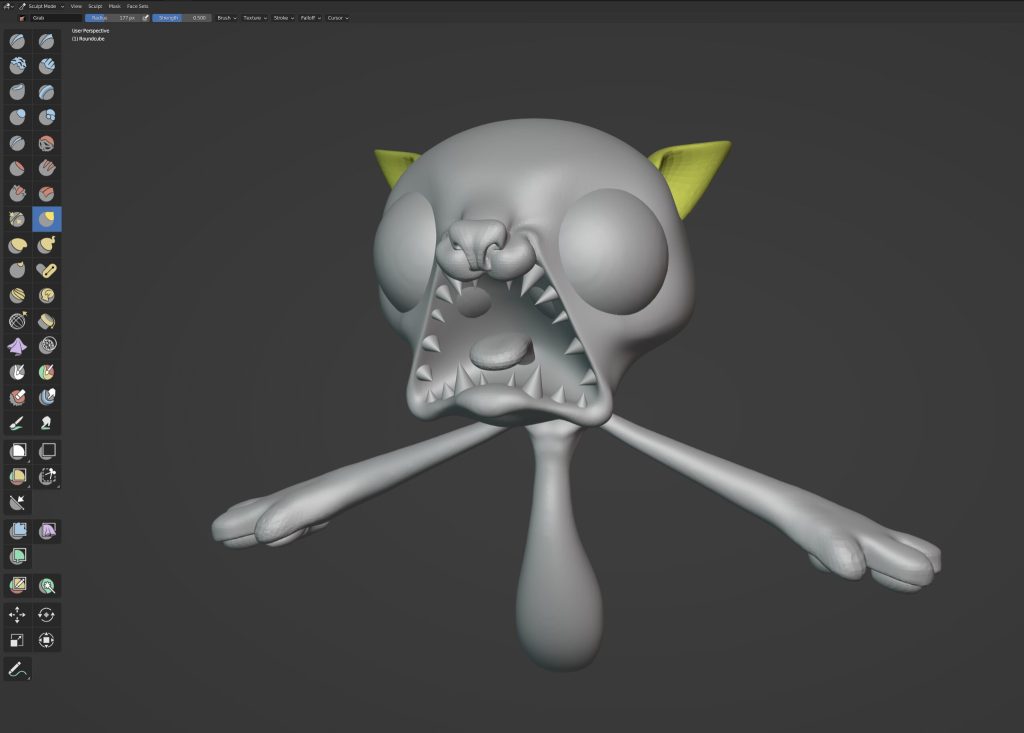 Early sculpting of the cat in “Fishy POV”. 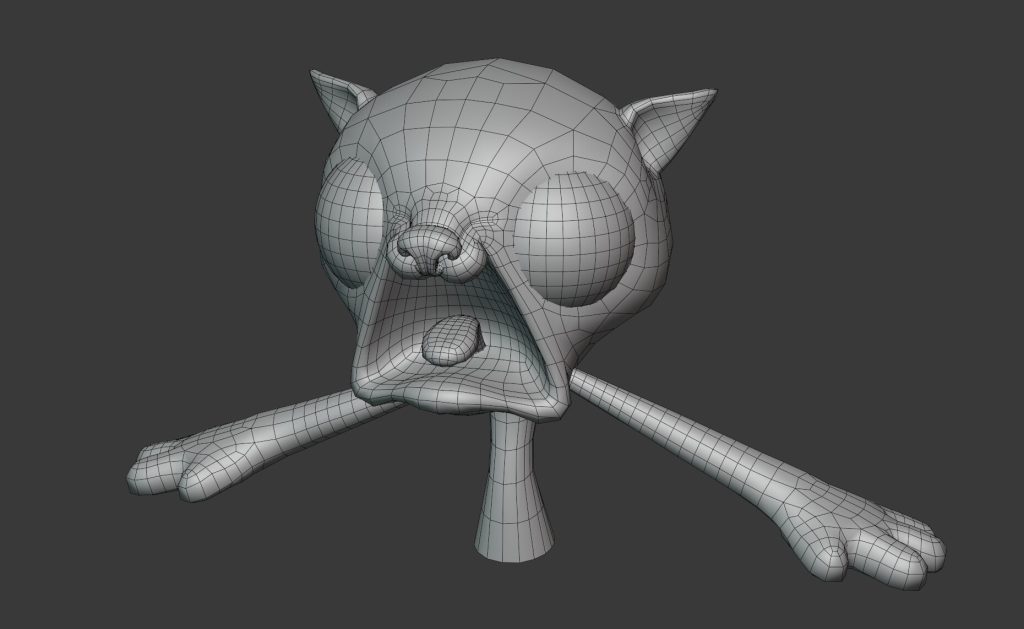 WIP Screenshot of the retopology process.

My general rule was to: 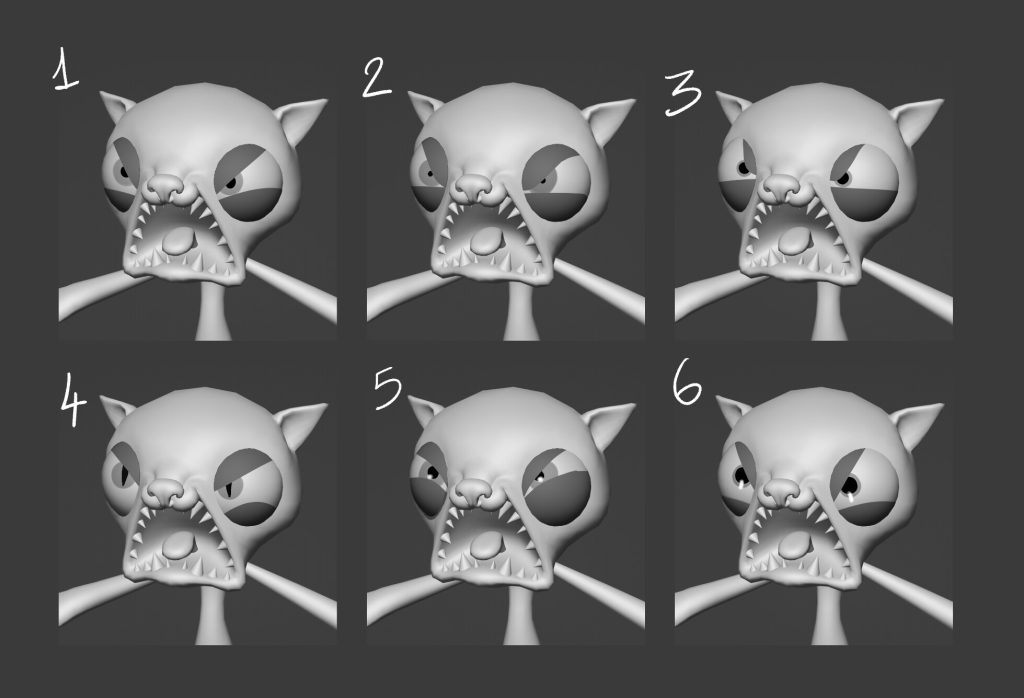 Some paintovers to test the effectiveness of various 2D shapes to convey the menacing expression.

After doing some tests, I found myself in a style that was like Alberto Mielgo meets Tom and Jerry which I quite enjoyed. And the recipe I found was to keep it low poly, use only three channels for the shaders: 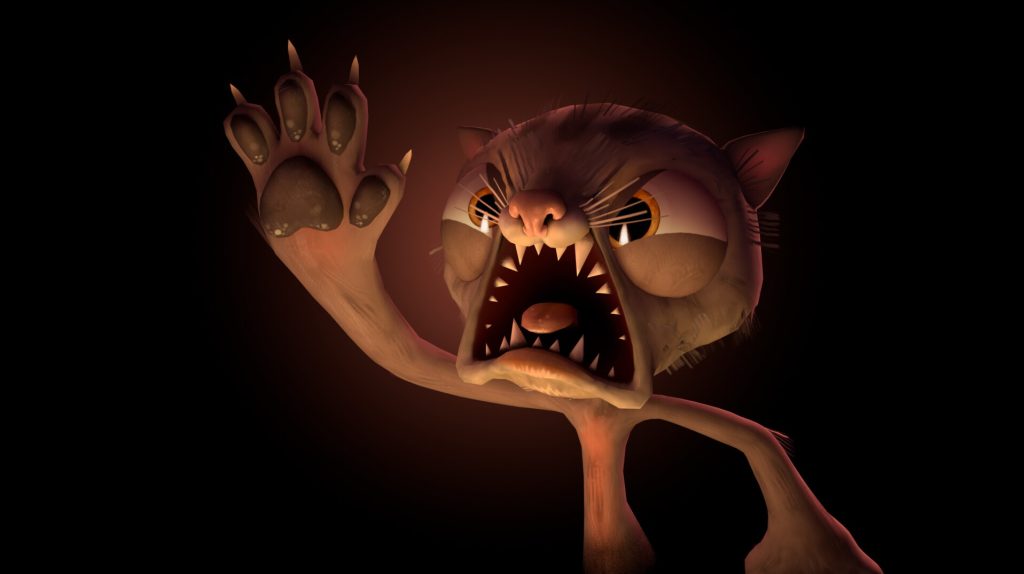 Final texturing of the cat. All the orange-ish lights coming from below the character are baked into the emission channel.

Also for the textures, I used Blender for painting the colors and I used Krita for painting some details that I could later project onto those textures in Blender.

Some of the Texture details I painted in Krita.

And inklines! To commit to the style, I used grease pencil to draw on top of the geometry. Then converted it to curves to clean it up and then converted back to geometry. 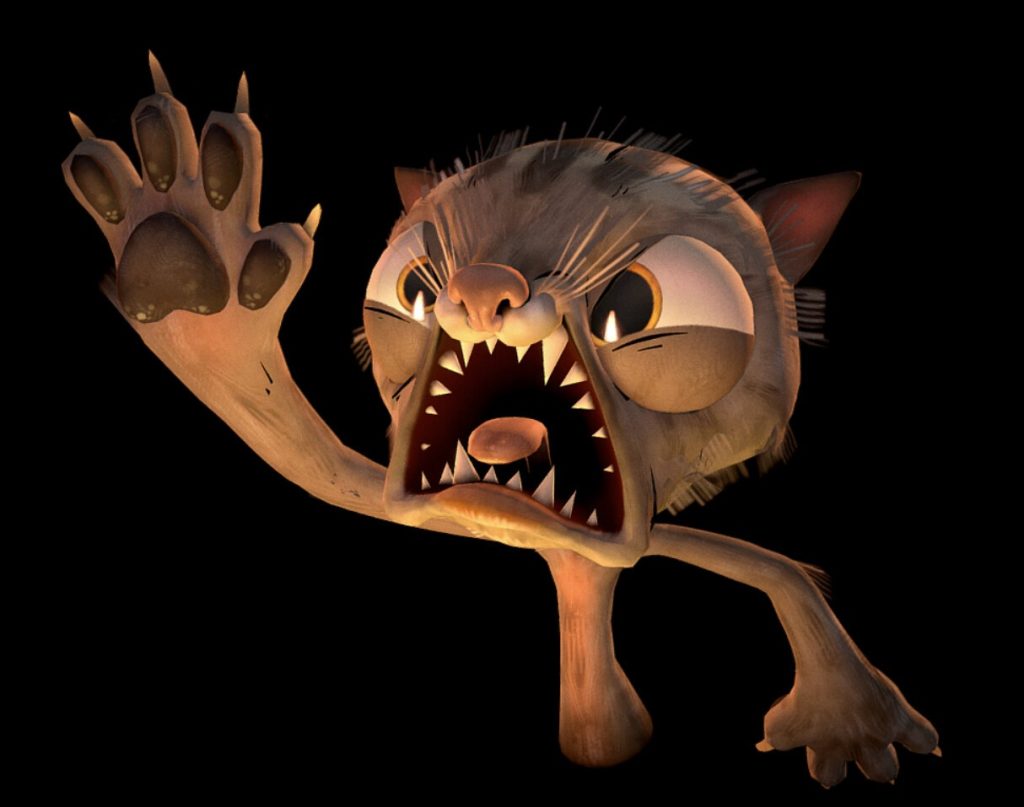 First test of the cat in Sketchfab. The inklines add a lot of expressivity!

In terms of the environment, I wanted to make this “everything is surrounded by darkness” kind of mood to make it a bit more immersive. I scattered some painted grass with geometry nodes and made it so the lighter grass was closer to the fire. Speaking of, I did some attempts to animate the fire with geometry nodes but they ended up being too harsh, aggressive and noisy so I discarded that idea and made the fire still instead. 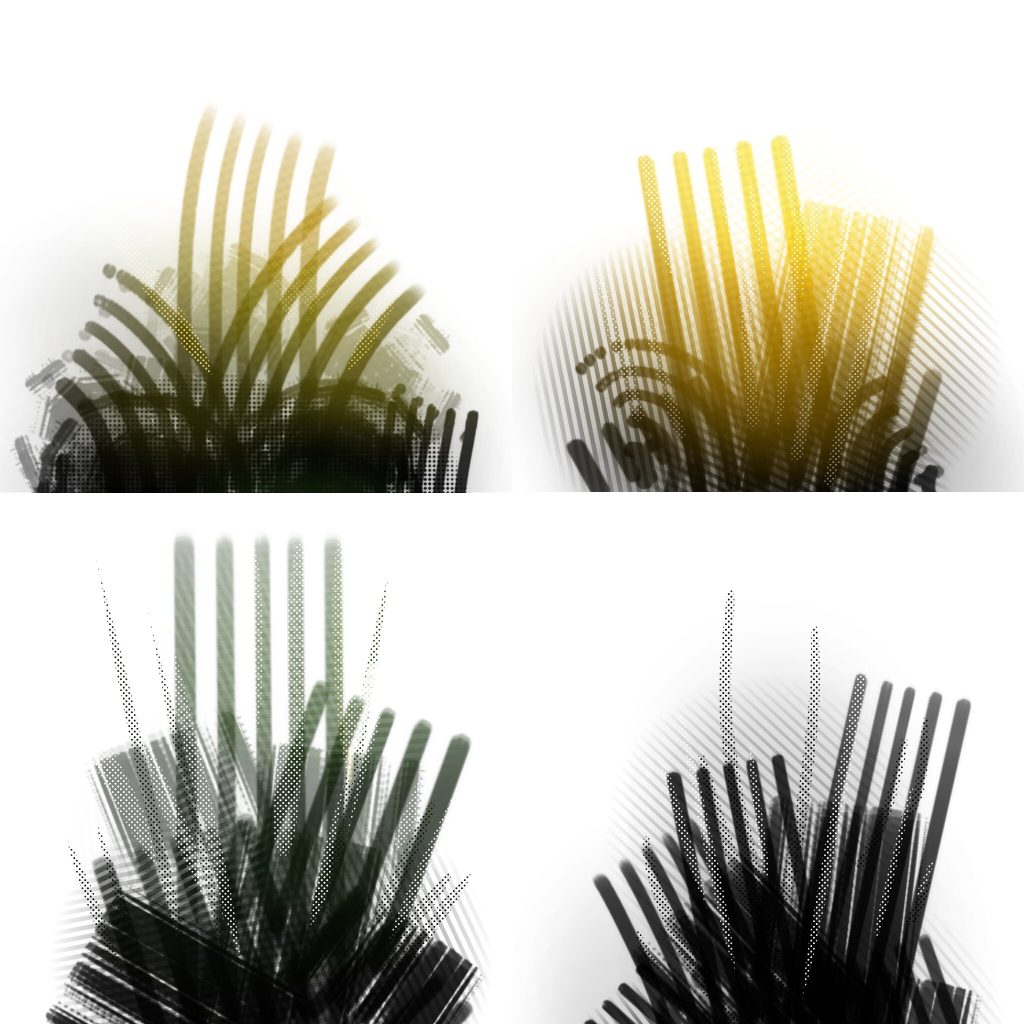 Grass sprites. The lighter ones appear closer to the center of the scene.

To finish up, I redesigned the fish to make it fit the style of the cat better and repeated the process for this second character. 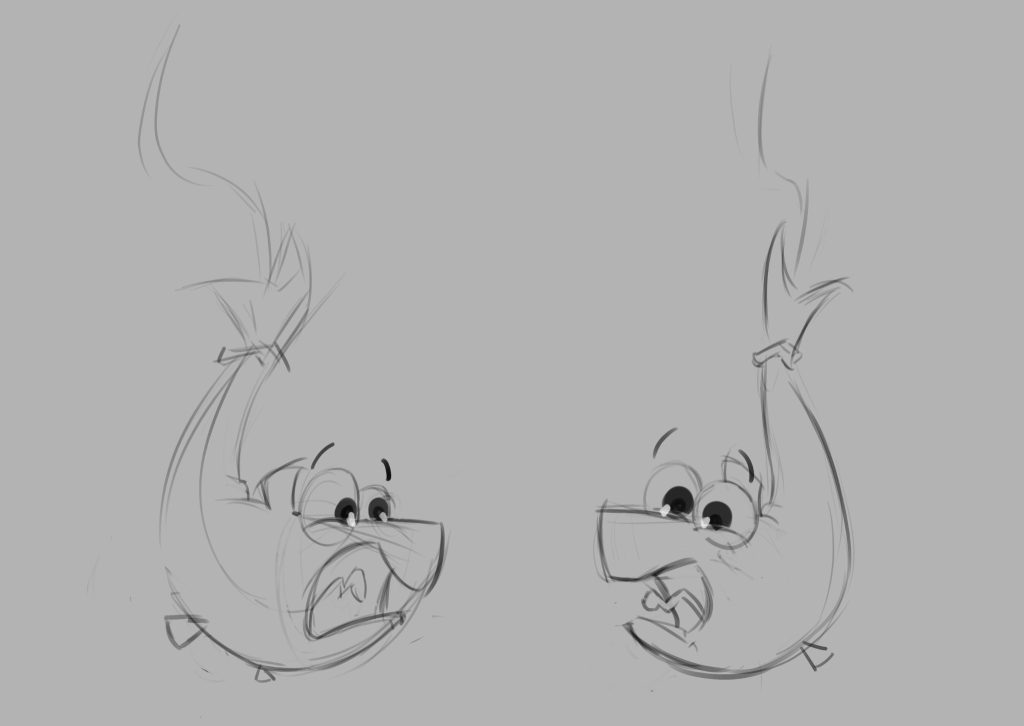 Sketch of the fish for sculpting.

Once I felt the design worked, I started blocking in the sculpting! For this character, since it has less moving parts, I decided to model it in pose. It was hard, but I think the 2D shapes translate well in 3D from all angles and it’s quite funny hahahaha! 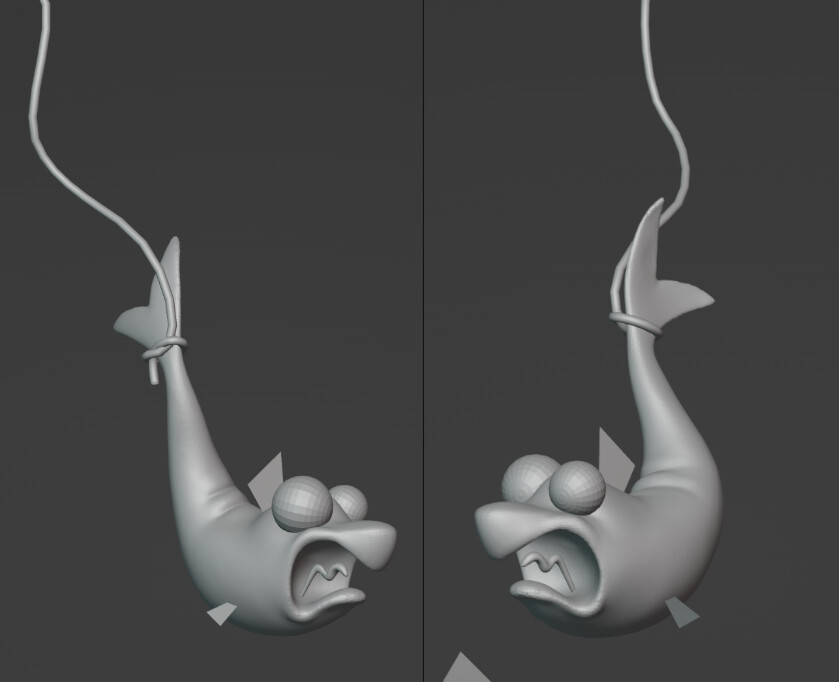 The final renders were made directly in Sketchfab with the Sketchfab screenshot tool. 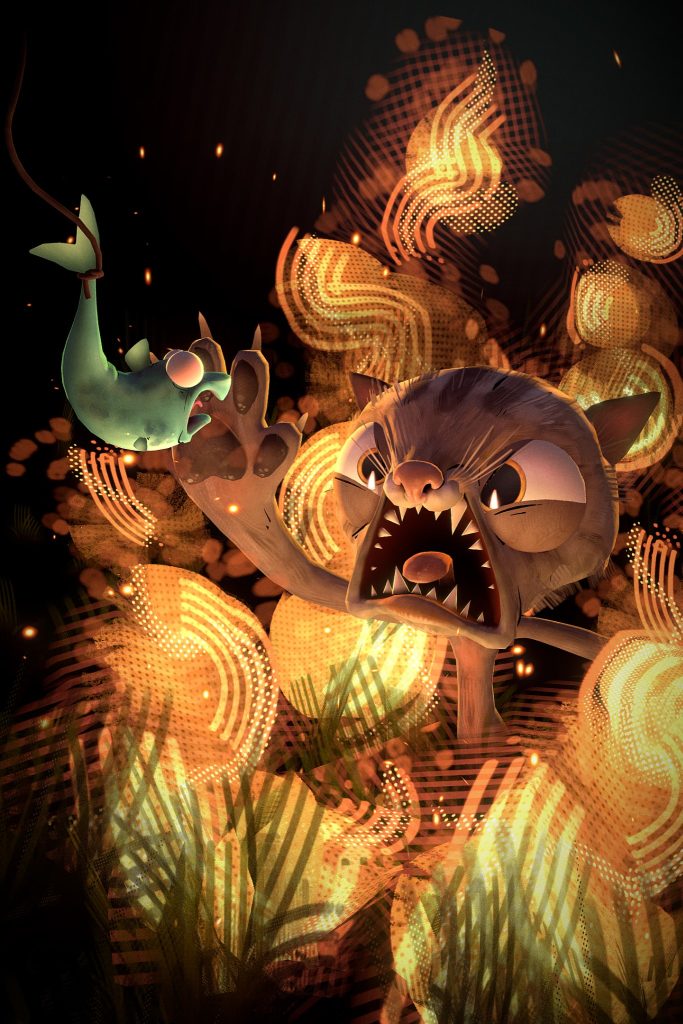 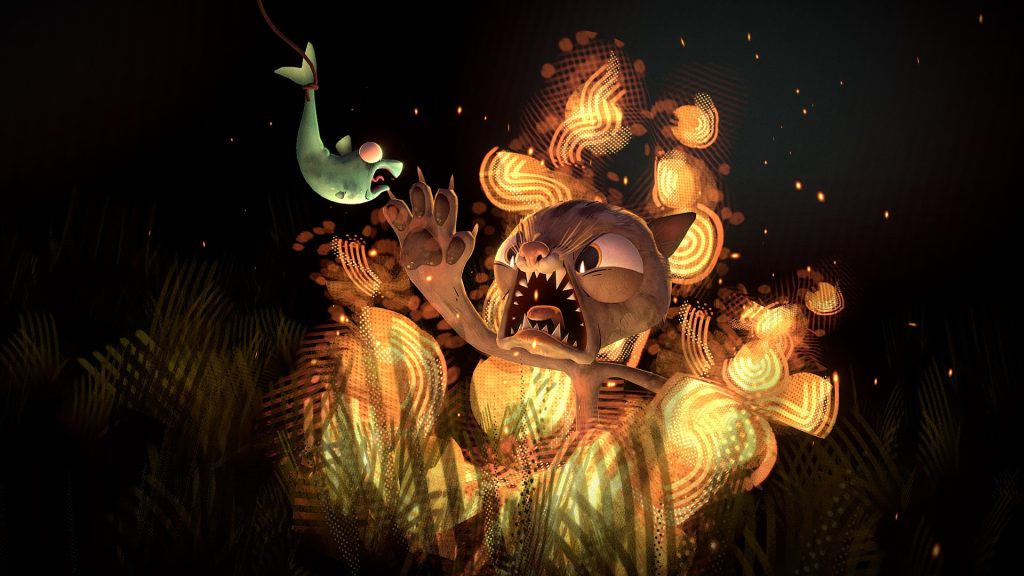 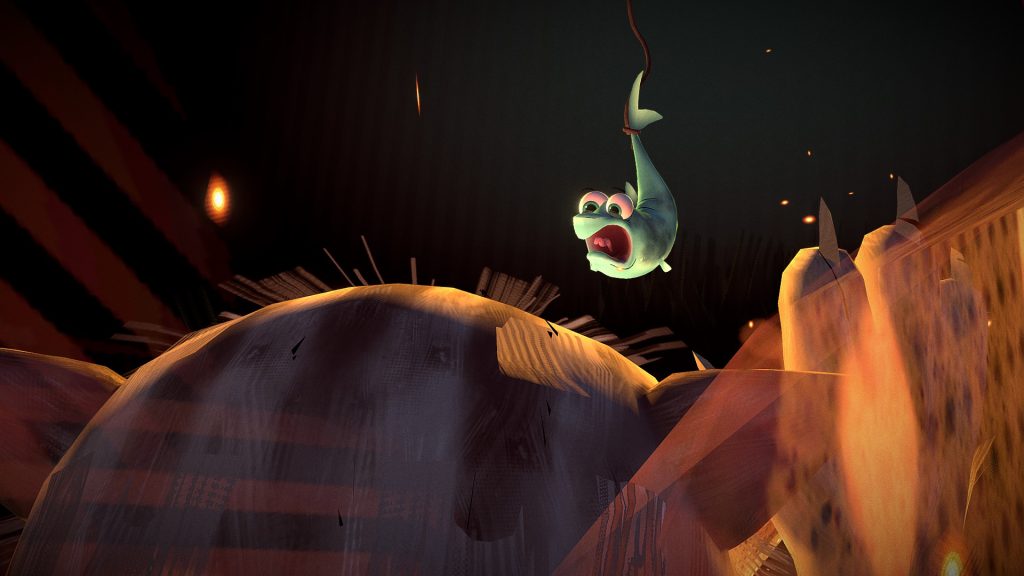 And like that, the project was finished! I want to take a second to say thanks to the organization of the #bcon22challenge, to Sketchfab for sponsoring, and to the jury for choosing me as the 2nd place winner.

You can read the diary of the progress in the Blender Artists topic of this entry.

Thank you for taking your time to read, I truly hope you guys learned something new or interesting from my work. Have a nice day! 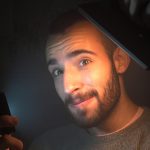 Pau Homs, a lighting artist and 3D generalist from Barcelona. He is passionate about animation and FOSS. 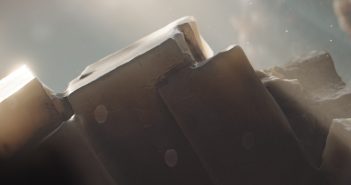 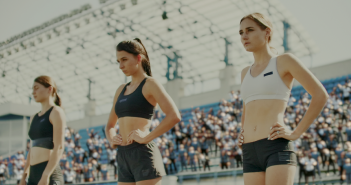