Hello! My name is Mikael Andersson, and I'm a character artist living in Sweden. My 3D art journey began back in 2006 when I went to a town called Skellefteå in the northern parts of Sweden to start my computer graphic studies at Gscept, which is a part of Luleå University of Technology.

Before this, I had not really touched 3D at all, but I quickly got hooked on the idea that I could recreate whatever I wanted in 3D with just enough practice. Early on, I knew I wanted to work with characters and it has pretty much been my goal ever since.

The first ten years of my career, I mainly used Maya but in one of my most recent jobs a few years back, I was introduced to Blender. And now, it's my go-to software for 3D modeling because of how it simplifies some workflows and lets you work in a non-destructive manner.

Lately, I've been into doing more stylized characters which really is a whole different beast to tackle. I mostly tend to do fanart in my spare time because I find it a bit easier to build something I am already inspired by while focusing on the challenges of modeling and texturing.

I really like all of the characters from the Warcraft universe and I had stumbled upon this night elf sentinel from World of Warcraft made by Matthew McKeown in the past. I now wanted to take the opportunity and try to recreate it in 3D. I think it was the selection of materials and the intricate patterns in the armor that caught my attention. It would become a fun challenge both modeling and texturing wise.

My main reference was of course the concept made by Matthew McKeown but I also used the in-game 3D model from World of Warcraft to fill in the gaps for the other angles I couldn't see. Here, the website Wowhead was of great use since they have all kinds of WoW assets also as 3D models, so you can rotate them around to get a clearer view. For the staff, I looked at the wooden buildings in the night elf city Darnassus to get a similar color and wood texture to it. I also added various anatomy pictures to refresh my memory a bit. I collected everything in PureRef which was really nice to get an overview of all the images you have gathered. 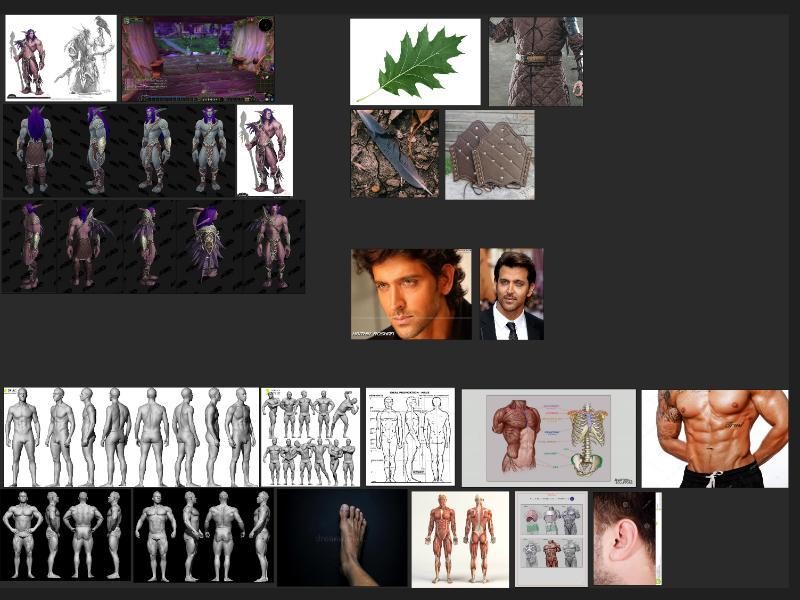 Here are all the references that were gathered in PureRef.

The block-out phase is not very fun but still important to get everything in place to check that it works together. Just get the right size of things and make sure the silhouette looks nice. Plan it all out before you start building your high-poly. It might be tempting to skip this but it could cause you headaches down the line so stick with it!

This is how this character started out—just the big shapes and my own body base mesh that I pushed and pulled to get a body shape similar to the concept. I generally do base meshes for more hard-surface items in Blender because I'm more comfortable there. I leave organic assets for ZBrush. 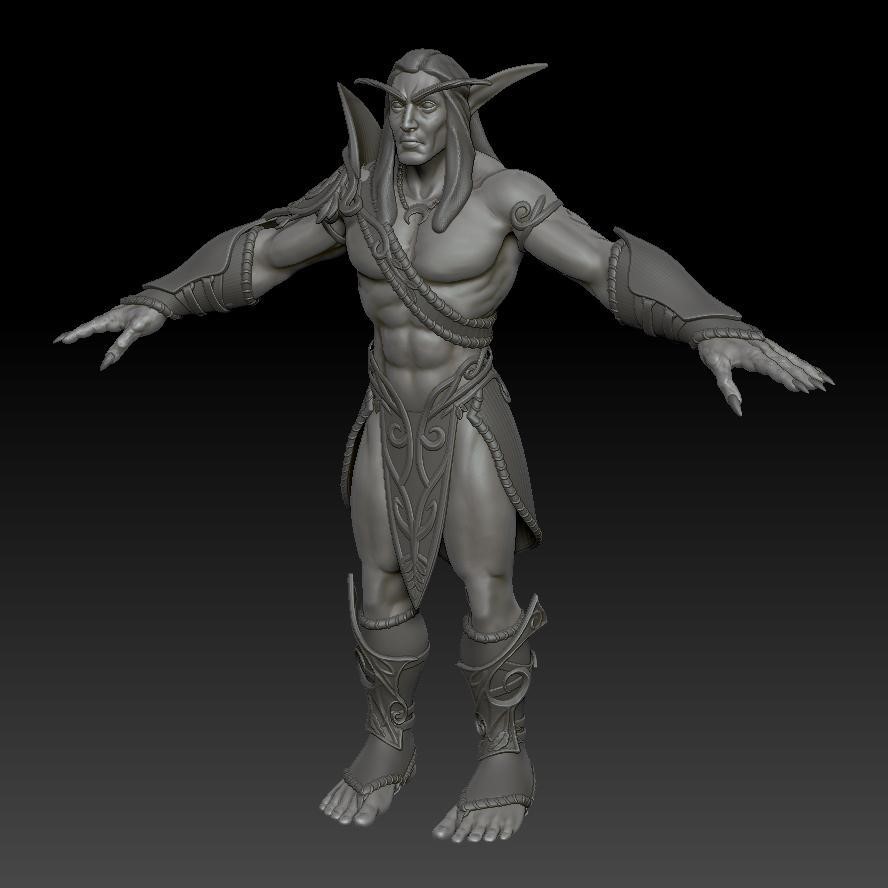 An early version of the block-out in ZBrush (some parts were modeled in Blender).

When I do high-polys that are only used to bake from, I'm not too concerned with having clean and neat topology as long as it looks nice. For example, when it comes to hard surface assets, I really like using creased edges instead of densely packed support edges. Mostly because it makes the meshes lighter and easier to tweak if needed but also because it goes much faster to build things this way.

For more organic parts, I like to start in ZBrush with a rough dynamesh shape, then rebuild it in Blender with cleaner topology and separate it into parts, and then back to ZBrush for some detailing.

For this character, I also used curves a lot to shape different meshes. For example, the hair, jewelry and the whirling skirt metal shapes all derive from meshes extruded along curves with the curve modifier. 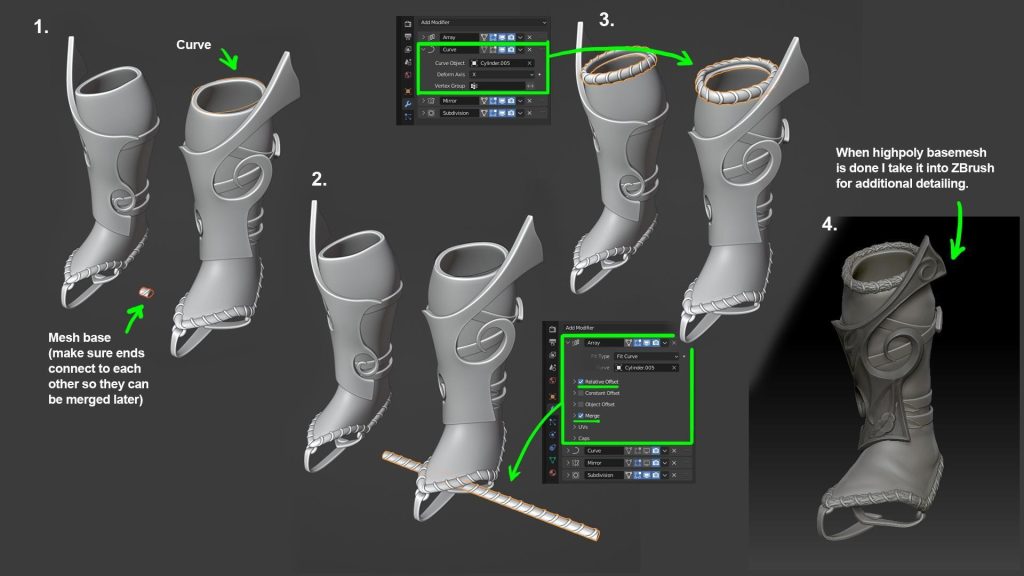 If the high-poly parts can be reused as a base for the low poly later on, that is also a big plus.

The final high-poly mesh in Zbrush.

For the low-poly, I use Retopoflow which is a nice addon that quickly lets you draw polygons on top of your high-poly. I try to keep it quads as much as possible. Then, I go in and split in some extra edges to help with the silhouette afterwards. This is to make sure it will animate and bend nicely. The area around the head has some extra polygons since that's where you want the focus. Also, I made sure to add extra edge loops at all joints so they hold up when bending. 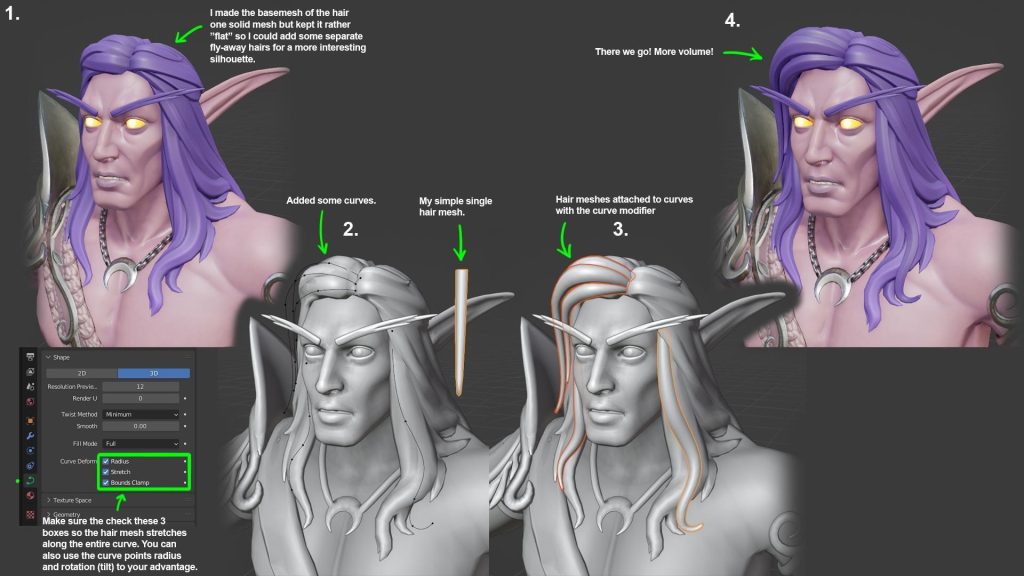 I used curves again to add additional hair strands to the low-poly. 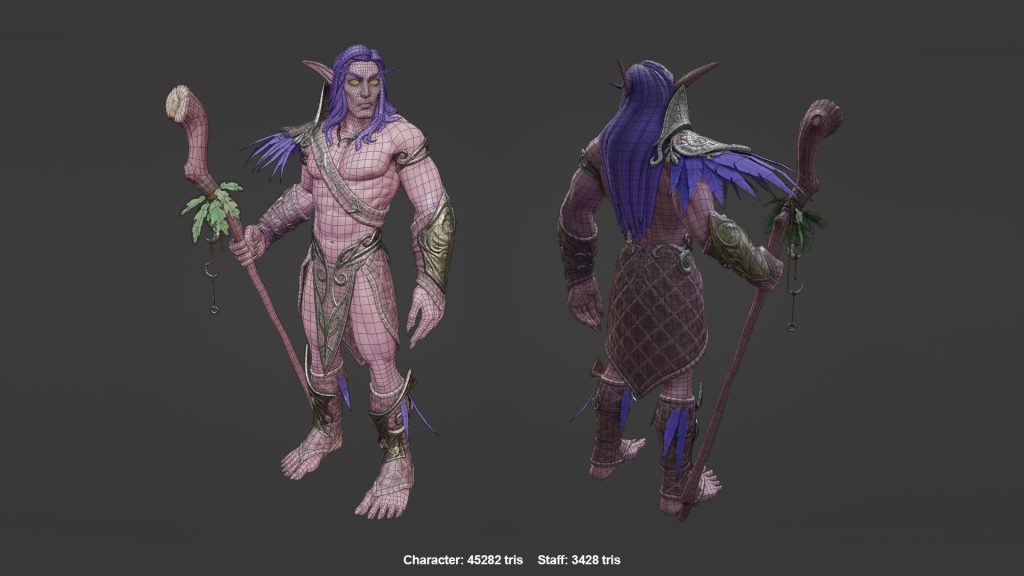 A shot of low-poly wireframe.

Texturing the night elf was pretty straightforward. I did both the baking and texturing in Adobe Substance 3D Painter. I usually have my own smart materials that I pass over to new projects and use as a base to speed things up. One thing that could be worth mentioning is that I usually leave certain things out of the high-poly and instead make it entirely with textures. This makes it less destructive and easier to iterate. For example, I left his skirt leather surface blank in Zbrush, just added a few wrinkles, and then instead made my own studded leather tiling texture separately that I could tile over the skirt surface instead.

The feathers and leaves were entirely hand-painted in Adobe Photoshop. I even painted the normal maps by making a normal map from a sphere that I color pick from. Totally unnecessary, but it was fun as an experiment. 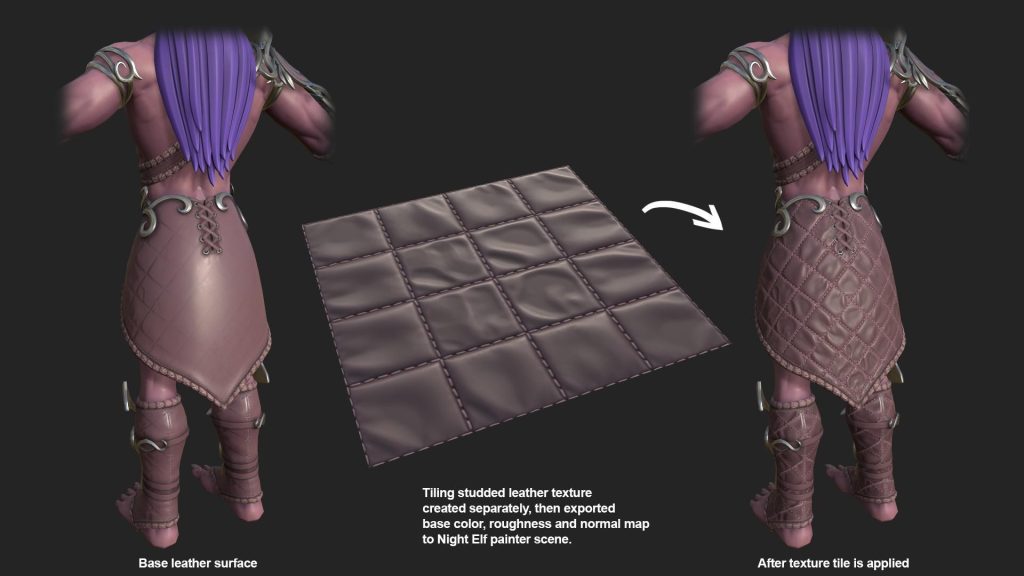 Certain details were added in textures instead of directly to the high-poly.

Different layers of the character in Adobe Substance 3D Painter.

One of the most satisfying things when creating your own characters is to do a nice-looking presentation and for that, it really helps with a cool pose. Since I don’t know how to rig myself, I use the add-on Rigify in Blender to do all the advanced setups for me. It's in Blender by default; you just need to activate it first and then click: Add > Armature > Human (Meta-Rig). This creates a skeleton of joints for you that you just need to move around and match to your character.

Blender has a nice in-depth documentation for this already. 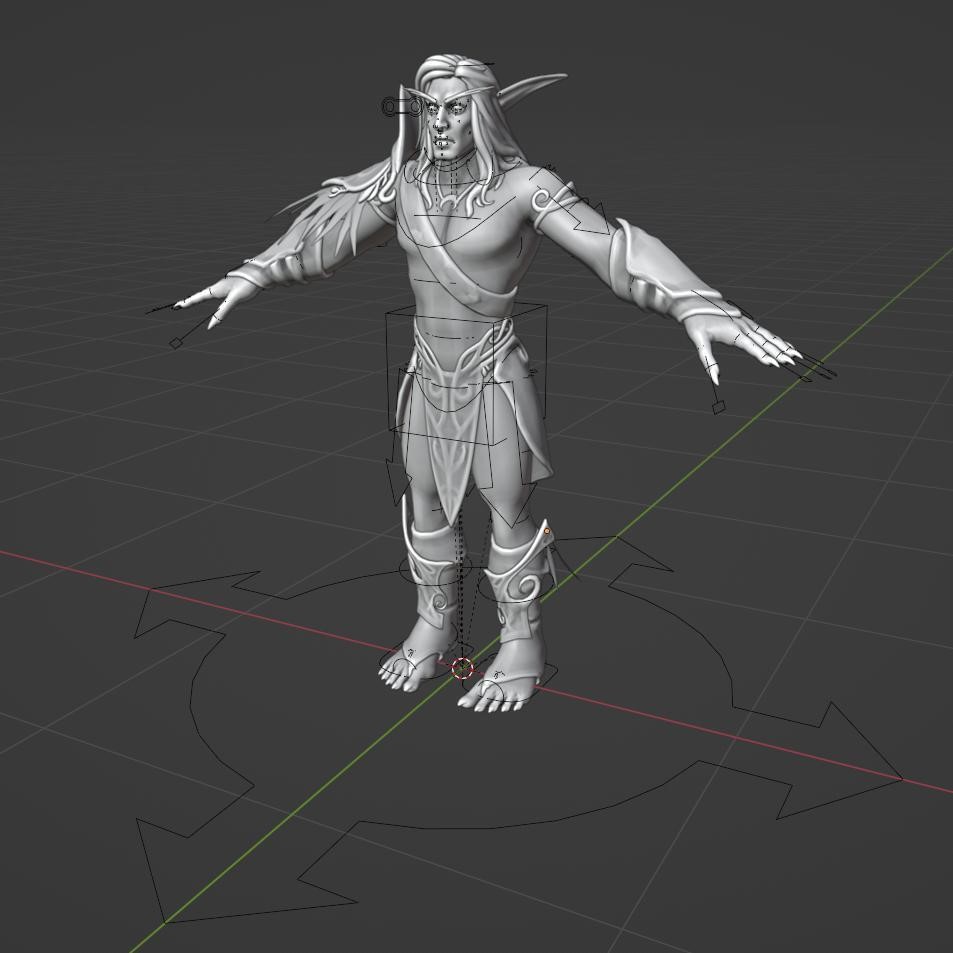 Finished rig in Blender, thanks to Rigify addon!

In earlier projects, I usually made small scenes for my character to help tell a story but to save some time, I just made a quick flat background to catch some of the lights with. I used Unreal Engine to present the character because I feel it’s important to show your game art in an actual game engine.

I originally went with a lighting technique called the ‘Rembrandt’ lighting technique where you just place a key light and a faint fill light at an angle to get a triangle shape on the opposite side of his face. The entire scene felt a bit too dark though, so I changed it to a simple 3-point light setup with a key light, fill light and back light instead. I later added some additional smaller lights behind him to get some more rim lighting around the character in select places.

To top it off, I always add a skylight with an HDRI from Polyhaven.

For this character, I went with one called Signal Hill Sunrise. It had some nice yellow-orange colored light that worked well together with his purple skin and hair. 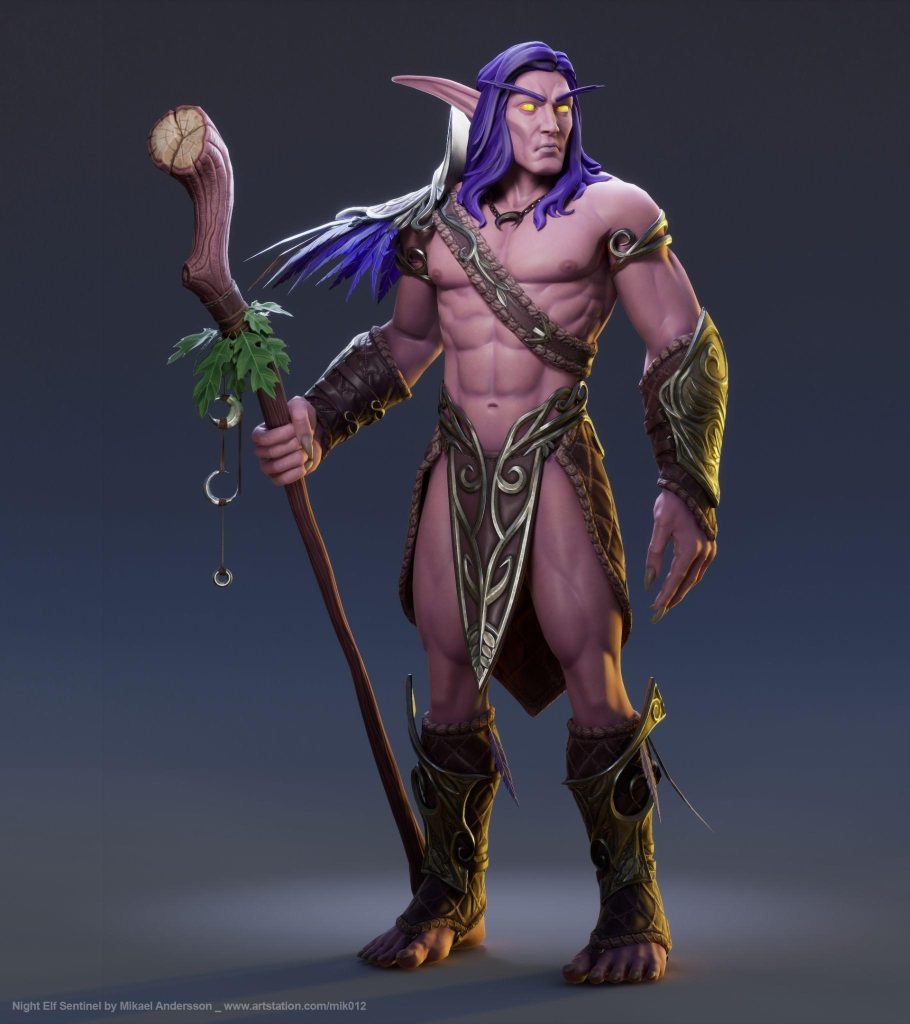 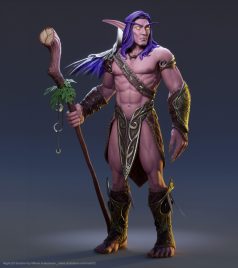 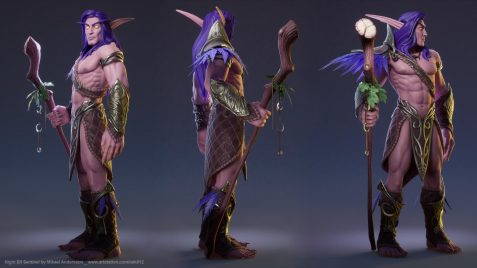 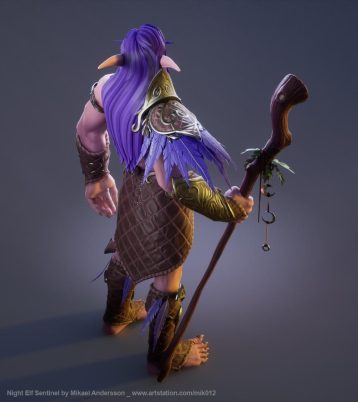 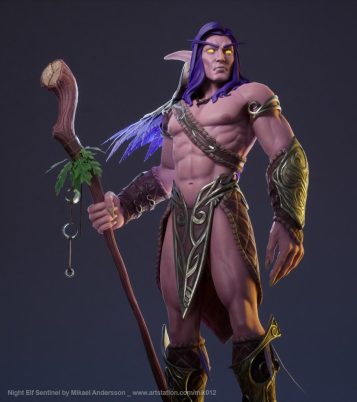 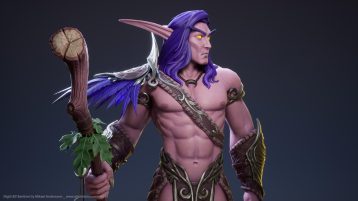 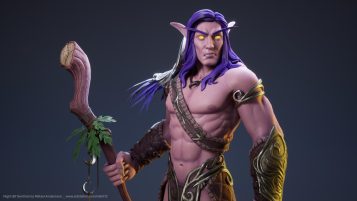 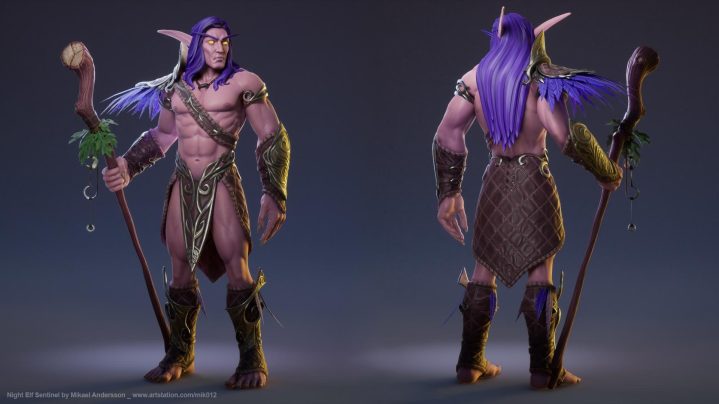 And that's pretty much it! Don’t hesitate to contact me if there's something you are wondering about that I didn't cover.

Thank you and have a nice day! 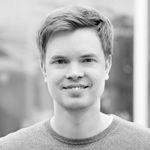 Mikael Andersson, a 3D character artist residing in Sweden. He is currently working as a freelancer. 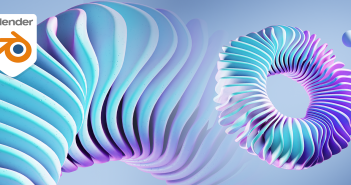 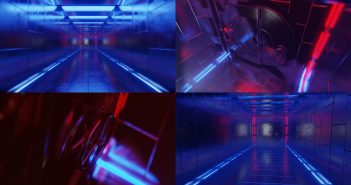