Hi! I’m Emily, a 3D character artist based in the UK. I’ve been in the games industry for just short of 2 years, with some prior experience in 3D printing for Tabletop gaming.

I’ve always loved character art, creating numerous characters for Dungeons & Dragons campaigns and eventually turning that interest into a career where I ended up pursuing the fun challenge of making 3D models that capture the essence of 2D illustrations.

Looking for my next project, I stumbled upon a fantastic concept piece by Darryl He. I loved the fun and cute idea behind a gacha shooting rabbit girl, and the motion of the piece felt like a great challenge. I hadn’t tackled a piece this complex before and aimed to improve some hard surface and posing skills. 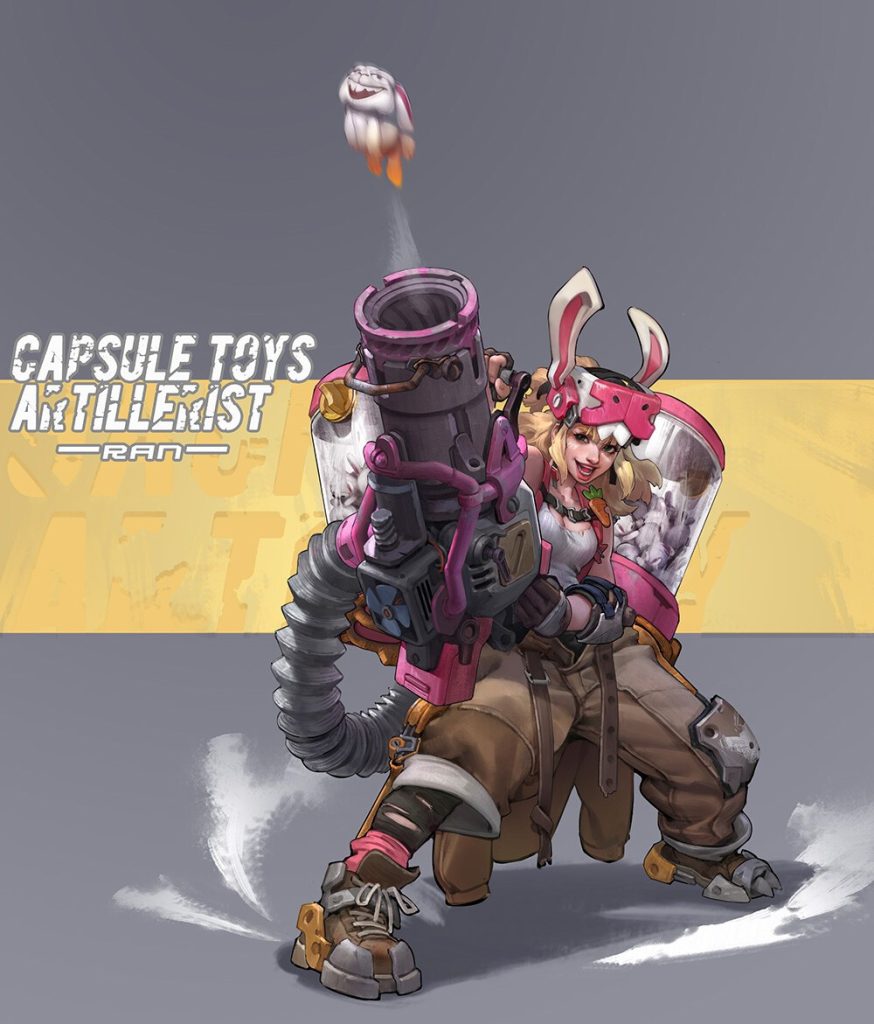 This project spanned a year (having to work on it little by little between work hours), during which I switched over to Blender for a lot of processes, the main ones being retopology, texturing, and rigging, but I will touch on the other areas for context.

I used ZBrush for sculpting and blocking out primary and secondary forms. Primary forms are the main focus as the silhouette is the only visible detail from the model in the final unlit render. Secondary forms are used purely as guidelines, or as I will discuss later, setting up a texturing base. And tertiary will not be seen at all! I don’t bake any normal maps so it’s not worth the effort.

I primarily use Maya for retopology, but recently discovered a bunch of Blender plug-ins that, when combined, mimic Maya’s ‘Quad Draw’ tool so I’ve been trying it out lately. 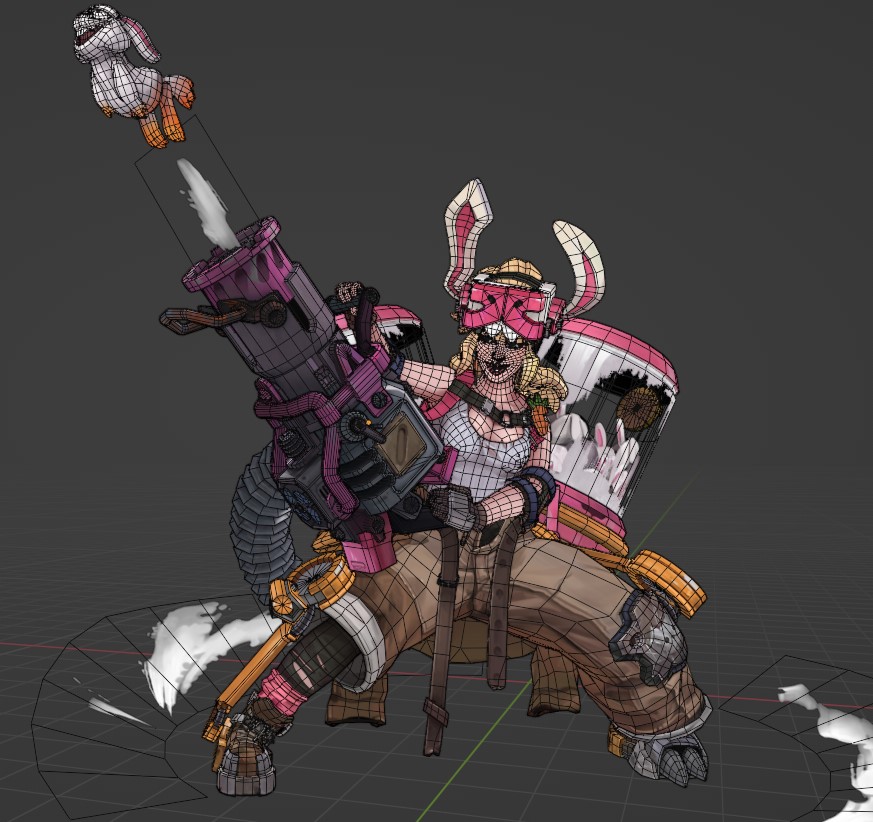 The following video by CG Boost goes over these in great depth and it’s definitely worth a try:

Previously, I used a plane followed by the displacement modifier combined with magnet snapping to faces which was very time consuming and awkward. Now you can simply draw edge loops out and it will connect them with ease!

The Add-ons in question:

I didn’t do anything special when unwrapping other than moving symmetrical stacked shells -1, so that when I bake the maps in Substance Painter, it gives a clean bake.

The only baking I did in Substance Painter follows this guide by Adam Wood which uses Curvature and Ambient Occlusion maps to lay a base for hand painted texturing. 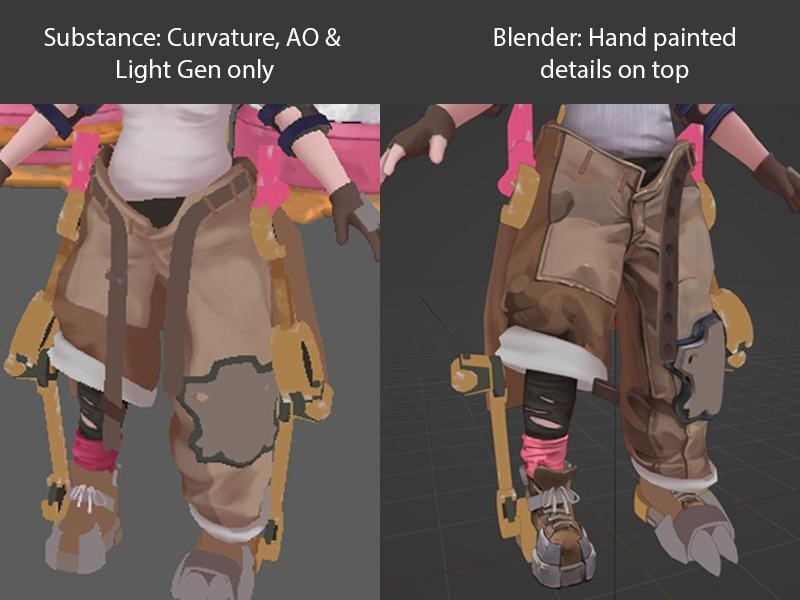 Along with the use of Substance Painter’s Light Generator, it creates a great base to work from. In this case, the most common use was filling in creases on clothing to more easily outline where to paint shadows.

From here, everything was done in Blender, all hand painted and all done using the default brush and settings. 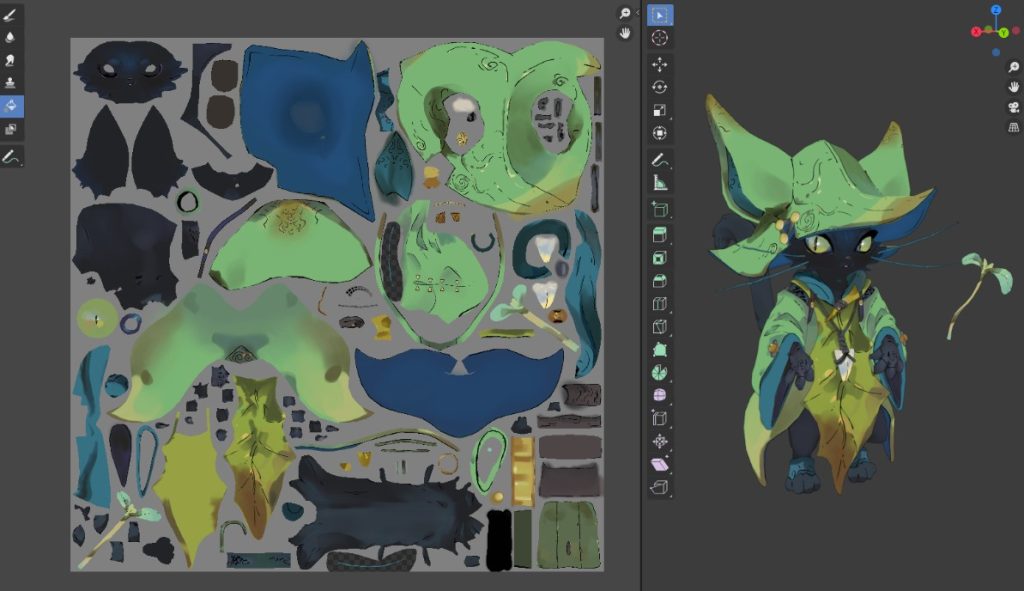 I have an in-depth Blender texture-painting tutorial on Notion which highlights tips and tricks that I find useful during this process. Just jump down to the Texturing heading! I also talk about the inverse hull method there which is what I use to create my character outlines.

This proved to be quite the tough character to rig and skin; opting to give Blender’s Human (Meta-rig) a try. Since I only needed the rig for posing, I skinned it with automatic weights and then refined it in pose. The gun also had to be rigged to allow it to connect to the machines at the back which was a simple single bone-chain armature. 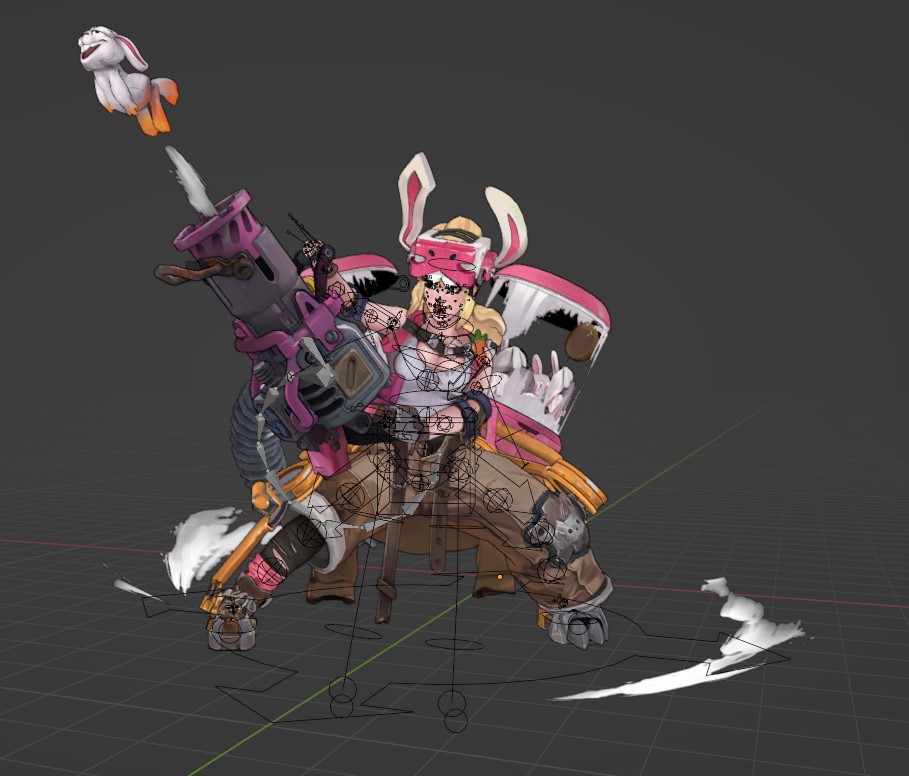 I do most of my rendering using Marmoset and Sketchfab due to their fast set-up. This does mean there are some limitations to what’s possible with materials. If I were to render in a game engine, I would be able to get around the issue of outlines not working on transparent materials with a custom shader, but without that control, the glass capsules remain the only non-outlined part of the mesh. 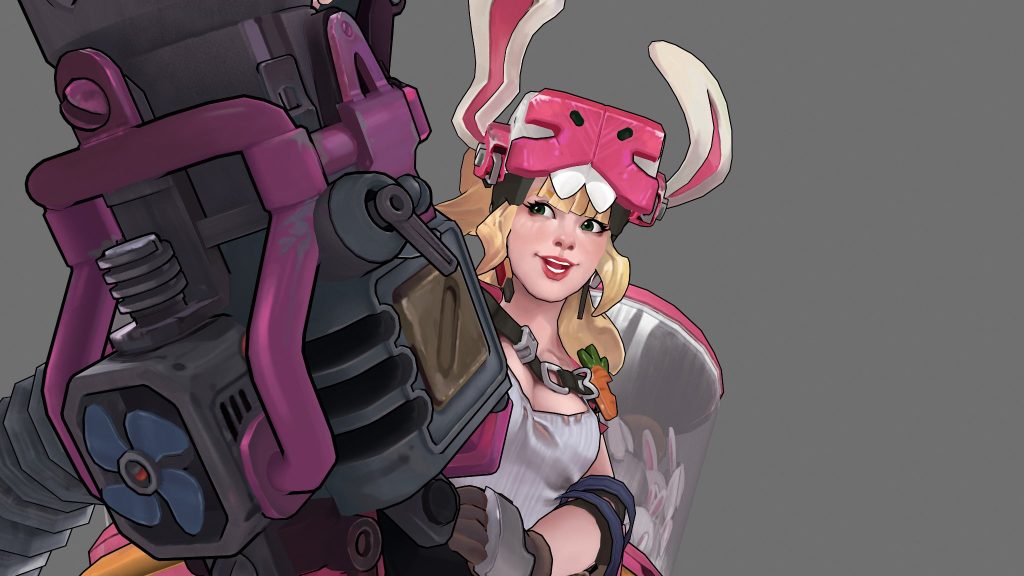 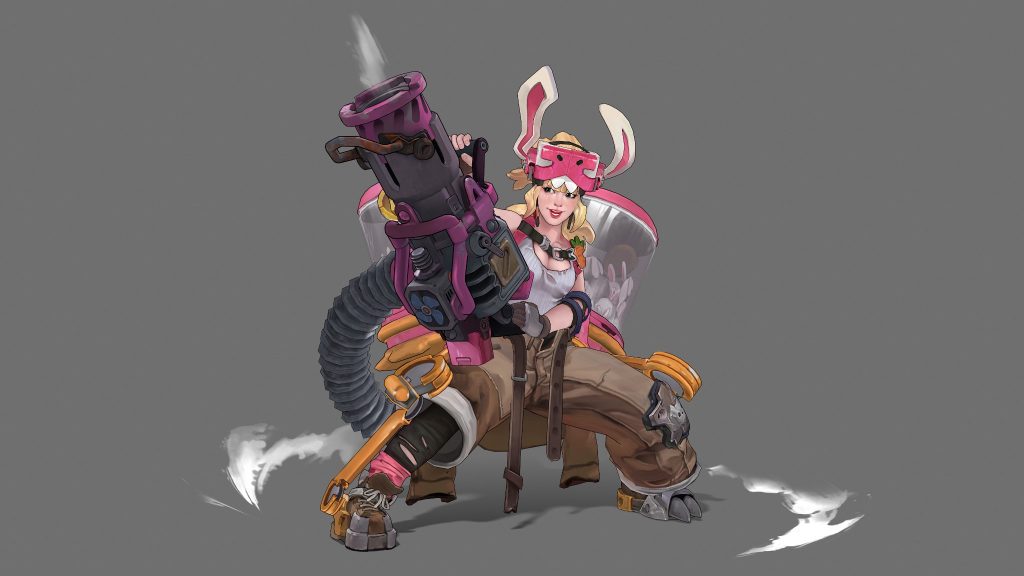 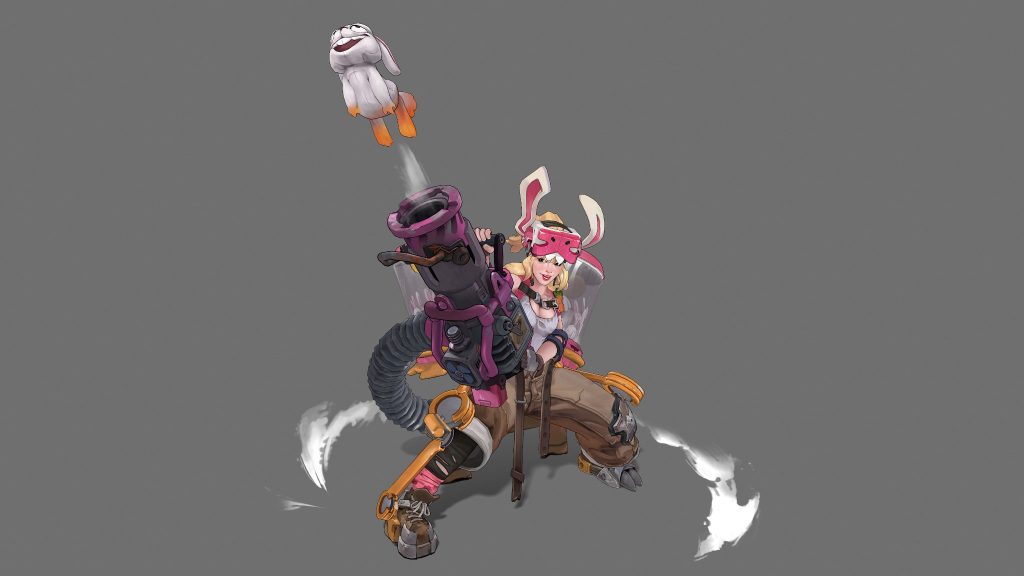 Thanks for taking the time to read the article! If you have any questions, feel free to contact me over on Twitter where I’m most active! 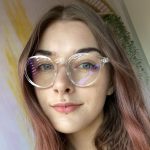 Emily Harrison, a 3D Artist based in the UK, specialising in characters and hand-painted works. 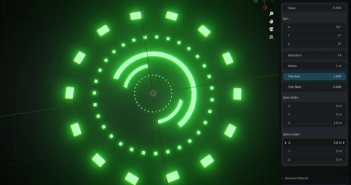 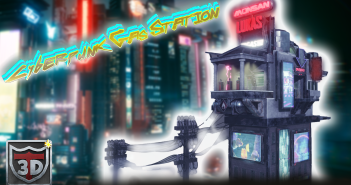