Hi, I am Sinisa Babic, a 3D artist from Belgrade, Serbia. I graduated at Interior Architecture Department at the University of Applied Arts in Belgrade. For over two decades, my main interest has been architectural visualization in 3D.

The first time I started with 3D was in 2000 with 3Ds Max 3.1. Since 2007, I have been working as a freelance 3D arch viz artist. While working with many different 3D programs, Blender became my favorite. I am a big fan of free and open-source software and advocate GNU/Linux :)

Besides architectural visualization, I do graphic design and write articles about Contemporary Architecture.

I live in Belgrade with my wife, daughter, and our pets.

I like galleries and open, empty spaces, surrounded by nature, greenery and forest.

Actually, the initial inspiration was to make render tests with Cycles of the "kontralicht" (meaning contra light) situation: The light situation in the interior space where the camera is towards the windows and the main objects are lit from the back. I like the contrast of the dark and light parts in interior.

At the same time, I was inspired by Japanese Wabi Sabi interiors, where art and beauty is found in imperfection.

Rough and irregular surfaces require a lot of work with textures and Blender sculpting tools. I combined those three inspirational themes into one scene, Wabi Sabi Gallery.

I modeled all the objects myself using Blender. I like Blender's modeling tools and with the help of the Blender Sculpt, I managed to get irregular surfaces of the info desk in the scene. I am not a sculpting artist, but it is great to have such tools in Blender. 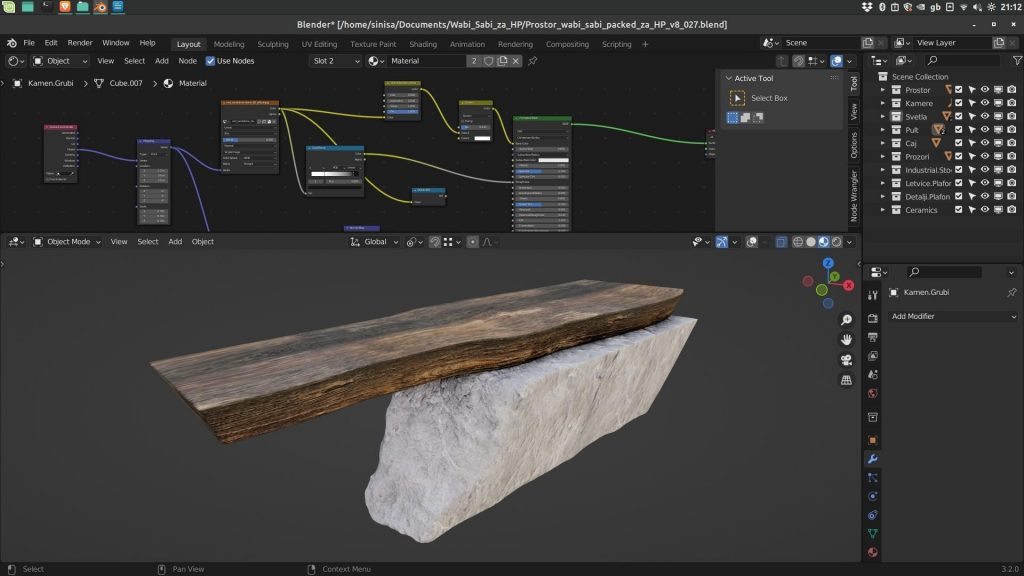 I tend to do everything as simple as possible in the creation process. The scene is small and well organized in Collections. I didn't use any external add-ons. All tools and add-ons are those from the trunk of the actual Blender version. 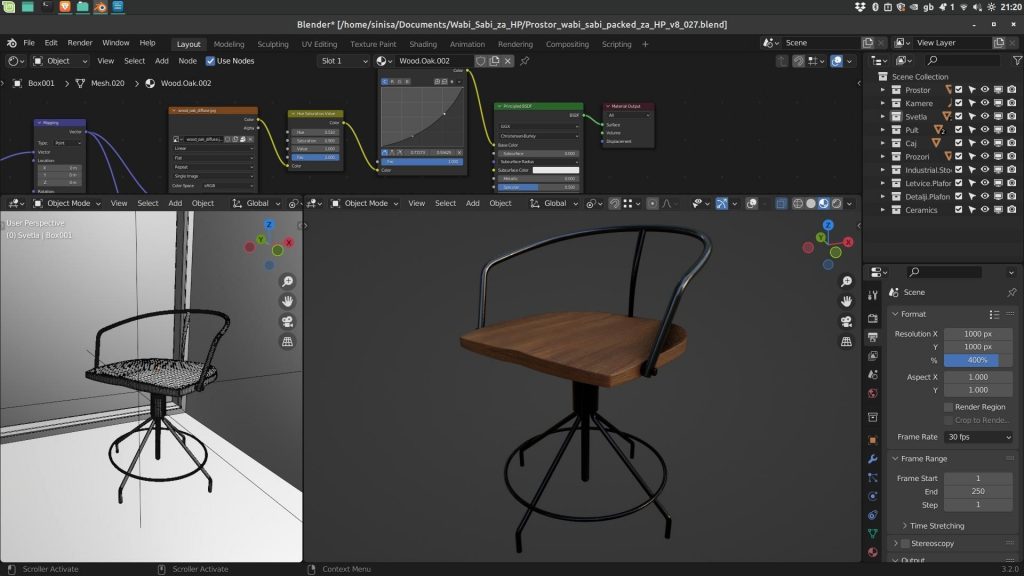 I had already modeled the tableware objects for another project for a client, and I found them very suitable for the scene. With the presence of those cups and the vase, the scene got a warmer touch. I did the artwork completely from the procedural Blender textures :) 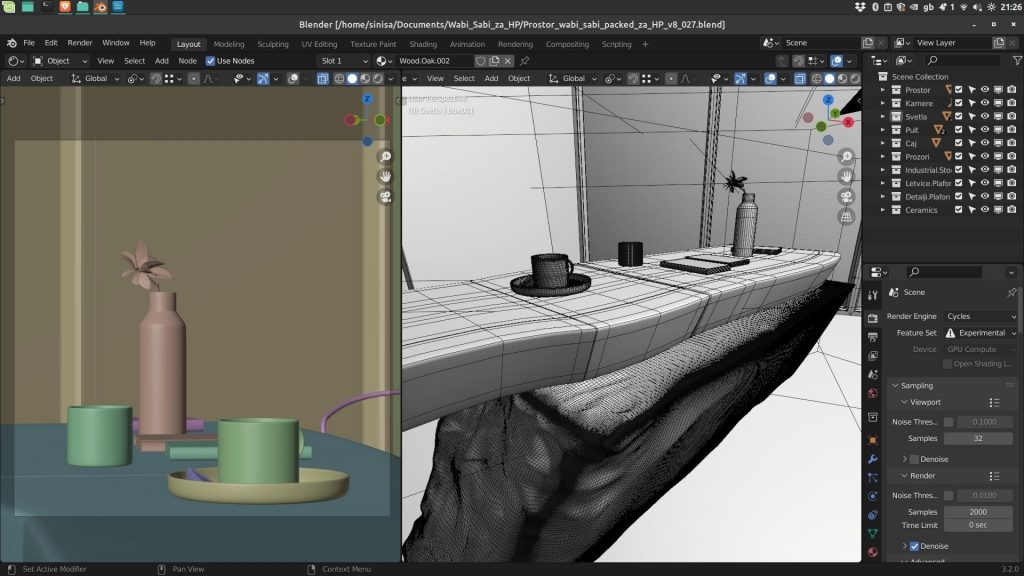 I needed some rough strokes from metal done by hammer or any other heavy tool, to confront the warm tones in the interior. 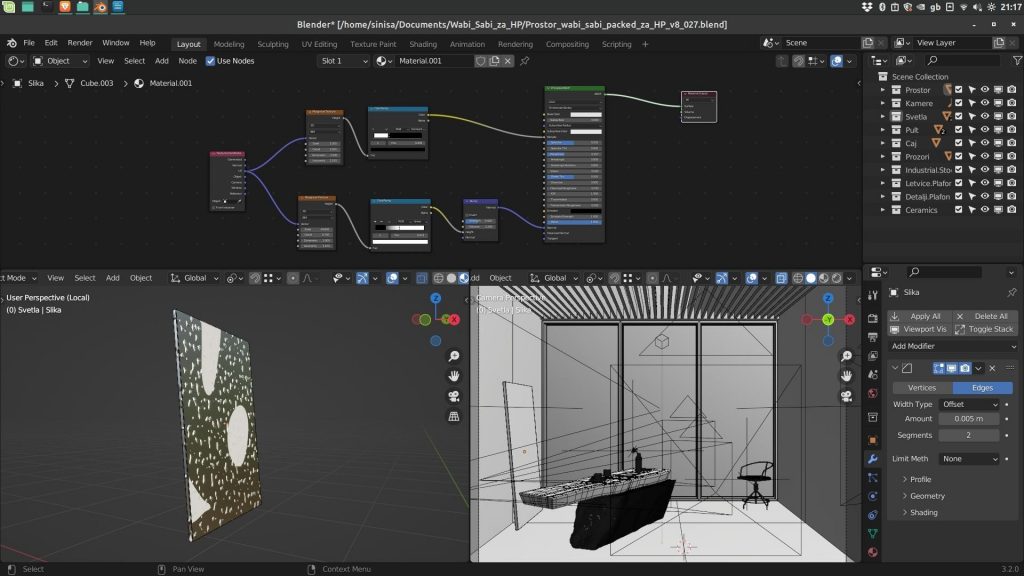 The texturing part was very important here to reach the realistic look of various surfaces. I mostly used textures from Poly Haven here, and also some of my own custom-made textures. 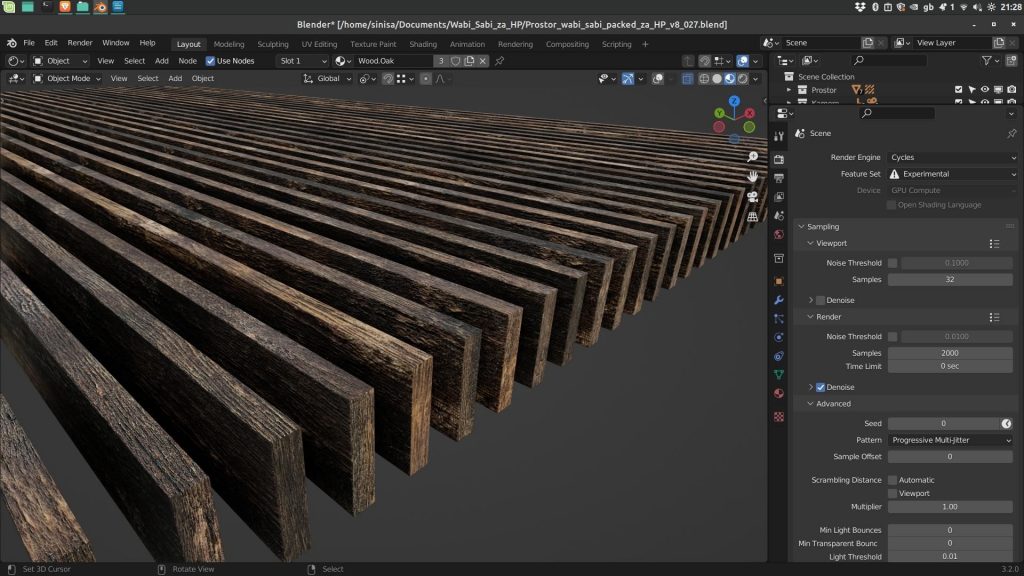 I made the texture for the ceramic tableware objects fully procedural.

Here is the node setup. 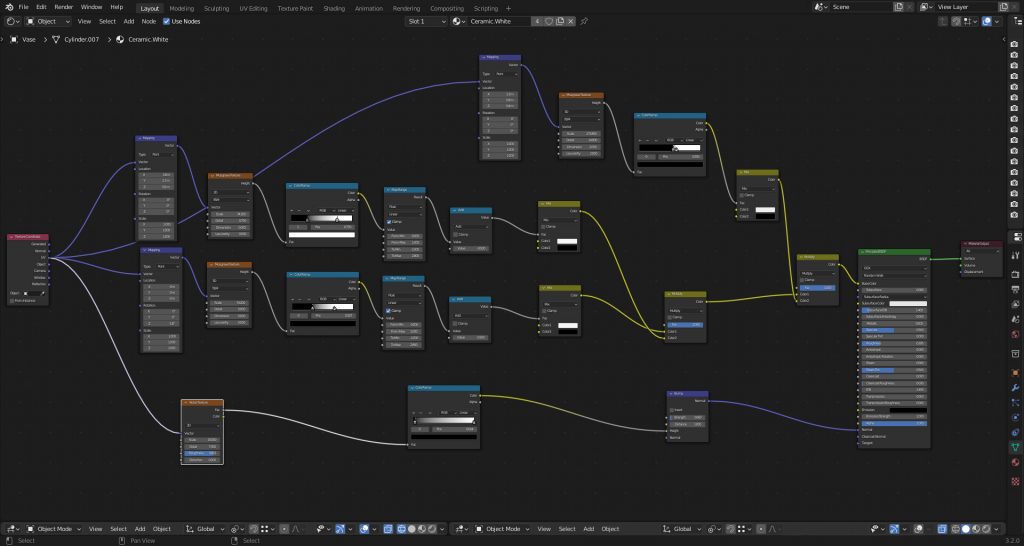 The background image is the HDRI "Sunset Forest" from Poly Haven.

With the light setup, I did some various tests during the process. Besides the HDRI as an environment light, I set plane area lights at each window partition for more enhanced shadows and light, which I could control better. 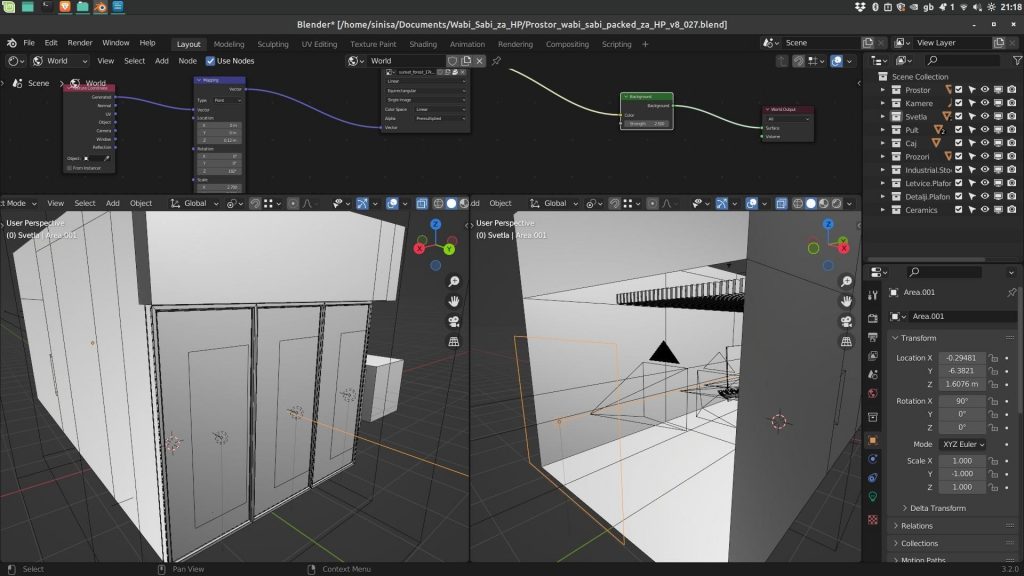 I gave a greenish tone to the main area lights, to mimic the color from the HDRI and the environment.

I placed another area light behind the camera to light the objects slightly from that direction too. With that light filled in, I also reduced some noise from that side.

Open Image denoiser did it's job at the end, but there were enough samples to not lose the quality, which was my primary goal here.

Post-processing was very basic here. I used Darktable and Krita. With Darktable, I enabled Local Contrast which gave a bit more contrast and sharpness.

I did the whole project using free and open-source software only.

I use Linux Mint Cinnamon edition as an Operating System. Linux provides stability, speed and better usage of resources. 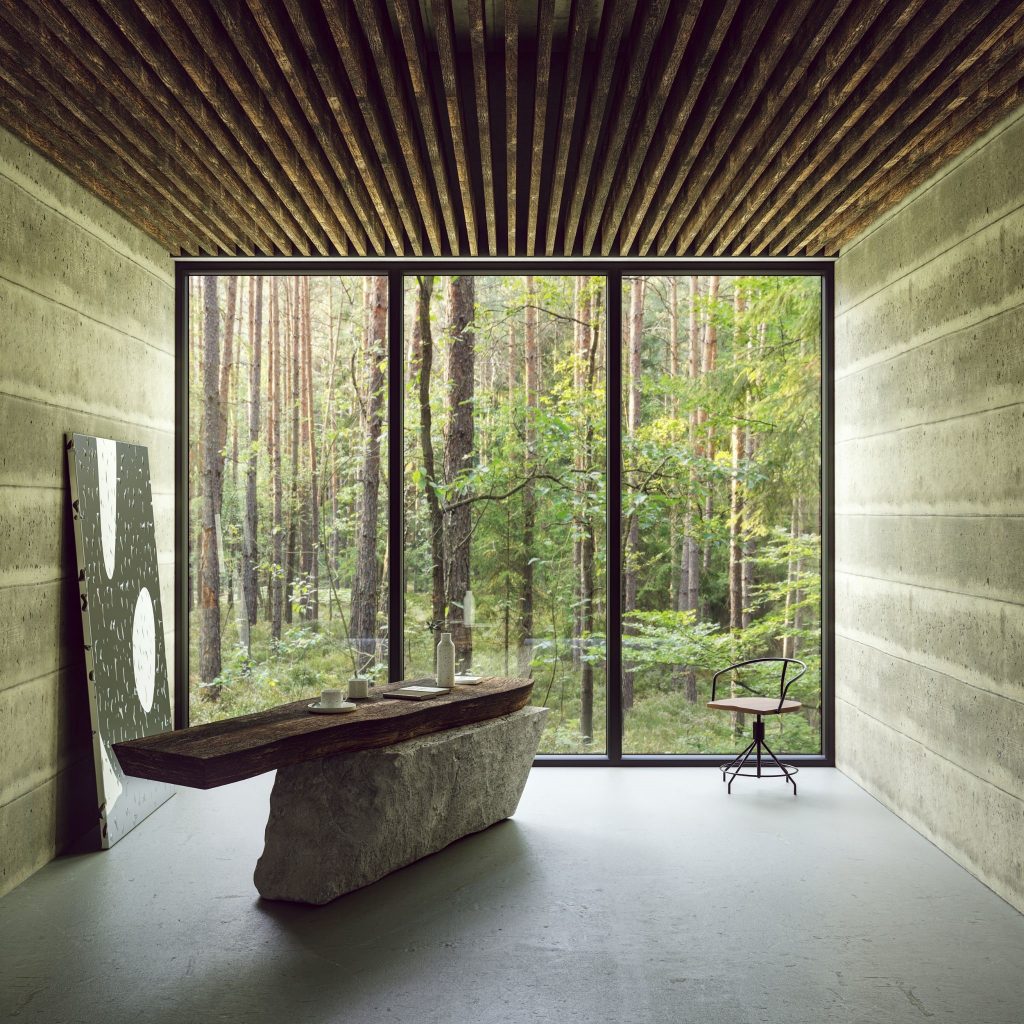 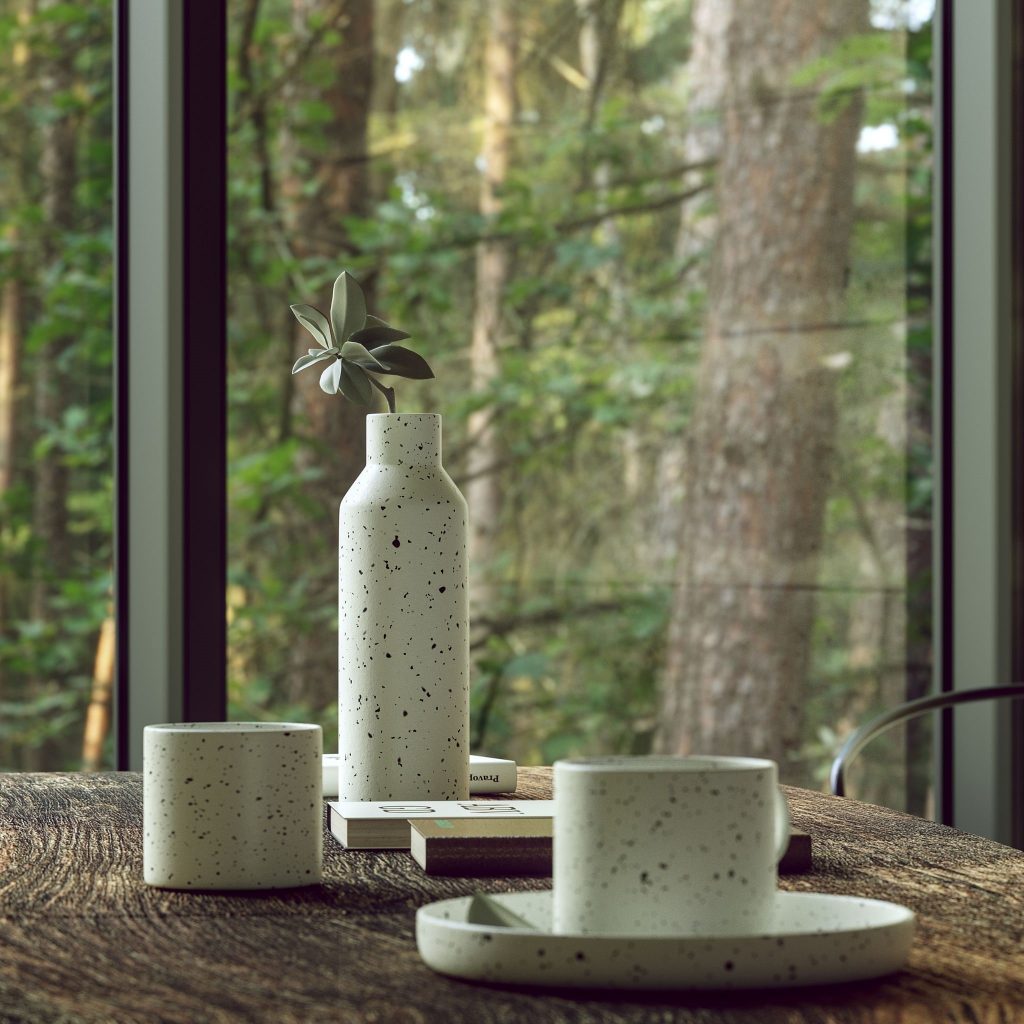 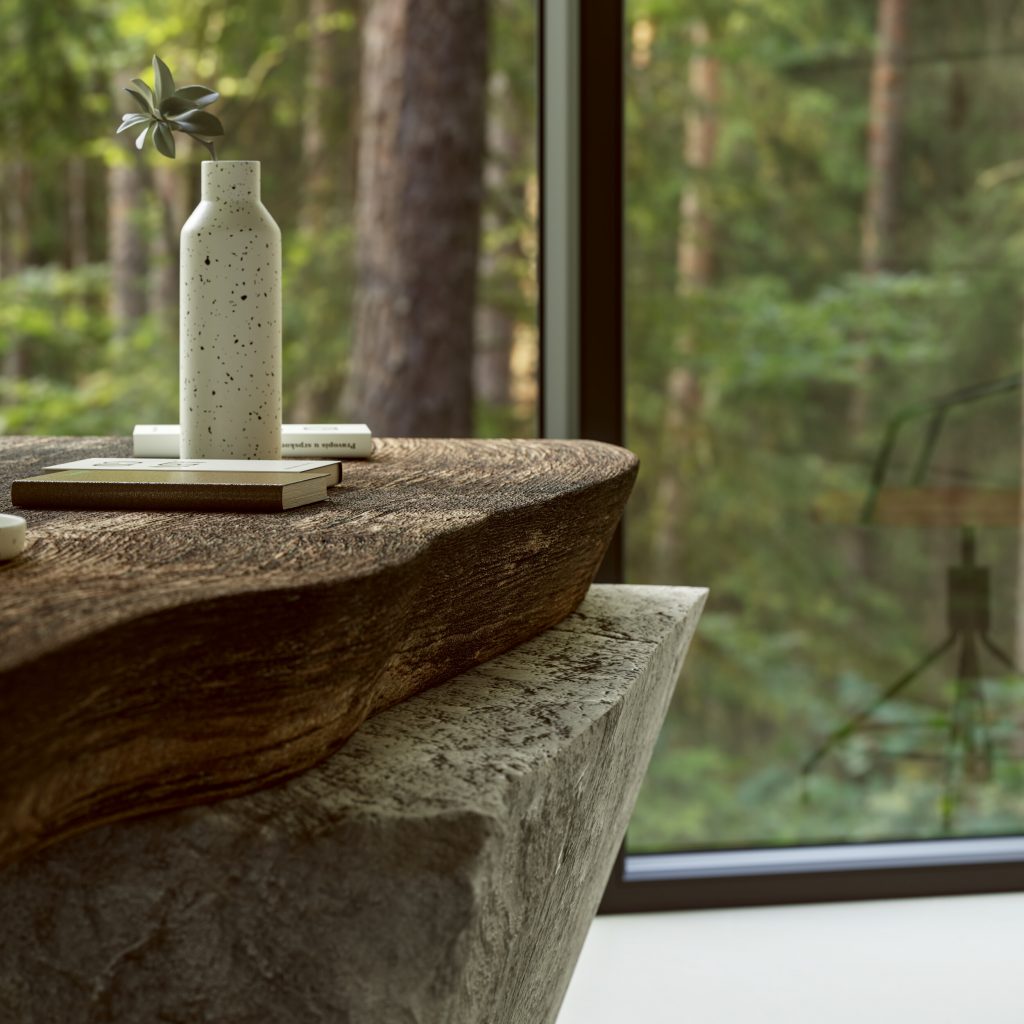 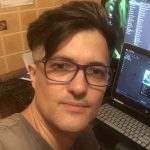 Sinisa Babic, a 3D artist from Belgrade, Serbia. He is currently working as a freelance artist and is the owner of a small company, VA MEME. 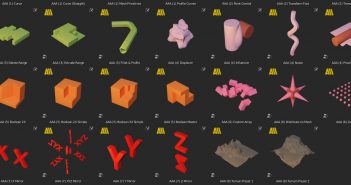 Previous ArticleSpeed up Your Non-Destructive Workflow with AAA Nodes [$] 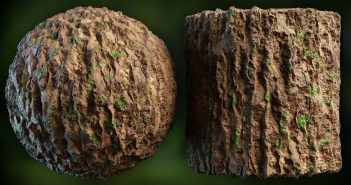