Hi everyone! I’m Mao Mornity (Fabien Brochard in real life), French freelance digital artist. I’m a former sound engineer with 15 years spent in the audio industry. I discovered digital art roughly 4 years ago. 2D first, and then 3D last year with Blender, which makes everything more amazing than ever.

I work with VR as well, and am actually working for several games and movie companies. I’m also a digital art instructor for a few French high schools.

My first try with 3D was with Terragen 4 a few years ago, and it was a bit too complex for a beginner. So, when I came to Blender with the 2.8 Beta in May 2019, it was a revelation.

The community is pretty insane and so active, with many Youtube videos to help overcome difficulties. I also followed tutorials from Jama Jurabaev, Jan Urschel, Creative Shrimp, and the so much awesome Ian Hubert. These guys put so much knowledge into their videos that it inspired me a lot.

I’m also a huge fan of VR 3D creation workflow, with Quill, Gravity Sketch, Adobe Medium and the last Substance Modeler. I tried a bit Blender XR and I’m hoping this solution will become a really good evolution for our beloved software.

Recently, like many, I tried to learn Unreal Engine to mix the best from all these different software.

Delta City illustration has been made for a French challenge for Digital Painting School, an online digital art school where I started my artistic journey a few years ago. Until now, I try not to miss any challenges they make, even if time flies too fast with regular work. It concerns all kinds of artists, from full beginners to pros, and the ambiance is really cool.

For this 14th challenge, the theme was “Post-Apocalyptic”. The goal was to imagine several concept art and illustrations for a potential video game. Several briefs were made to make the comparison easier between people's creations—five environments, five characters and five creatures.

I chose one specific environment for my submission, and the brief was the following one: “Depending on locations, Water Keepers cities could be really different: sometimes around natural wells, at the top of hydraulic dams, or to control an oasis. But the most famous and impressive one is “The Delta”, a stilt town lying on the last viable delta on earth.”

I quickly assumed the fact that the last viable delta on earth will be the Nile, as it has provided health and resources to many civilizations for millennials. As life conditions and resources could be complicated, I chose wooden materials and a slight amount of scavenged components as a base to construct the houses and structures.

As our protagonists are the Water Keepers, and even if the Nile still provides a great amount of clean water, I imagine some kind of water tanks to capture rain and dew. It’s exactly what these main structures are for in the artwork. Their shapes are like water drops, and the double-flared top part is made to keep rain from the upper one, and dew for the underneath part. The lower part of the “drop” at the river level is the main tank, and keeps the water cool under the water level.

The main part of the city could be seen slightly in the background and is more like a classic stilt city. Tinkered wind turbines help to create a small amount of electricity to supply pumps and lights at night. 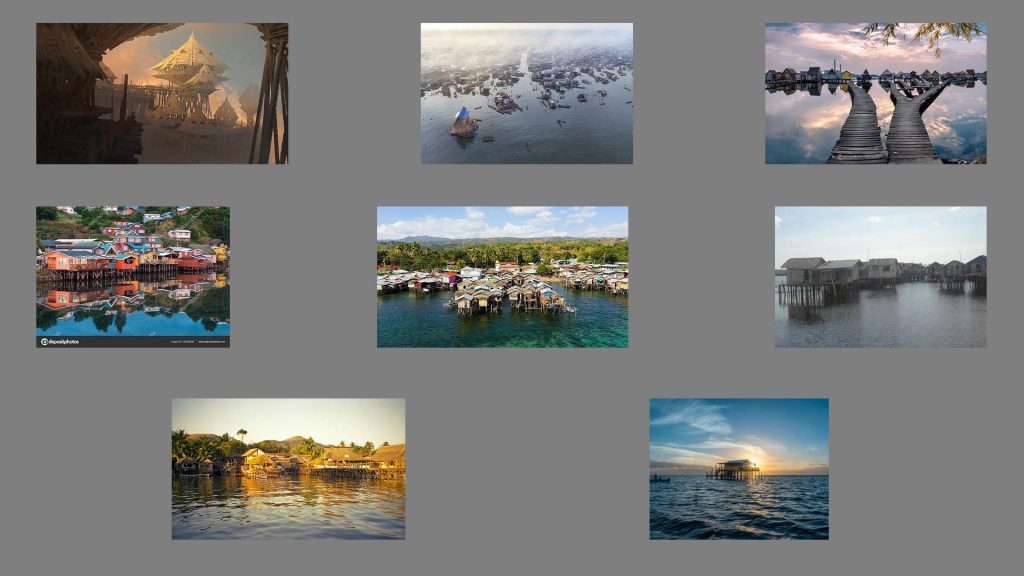 Regarding the mood, I really wanted to get some kind of peaceful post-apocalyptic feel, not the classic dusty and desaturated one. This area concerns Water Keepers, not a war zone, or fuel dealers like Mad Max, so I chose to put as many colors I could, like a kind of post apocalyptic rainbow with a warm feeling, because people need water, so this faction brings some kind of hope and comfort to others, even if they have to fight sometimes to protect the precious resource, but that’s not what I wanted to show on this concept.


The first part was making the main stilt structures. I modeled them in VR using Gravity Sketch. I really love this piece of software, for VR sculpting and modeling is so much easier and faster than doing it on a flat screen.

I could’ve done it in Blender as well, but it would be tedious work. Maybe not with geometry nodes, but I’m not comfortable with them for now.

I tried Blender XR, and it’s really something I wanted to see becoming a great VR tool someday. But Blender is not a VR software, and the interface has been made for computers for now. It’s possible to override the many controls by using a voice controller, and it’s pretty amazing. But I’m French and the software has some trouble understanding my accent sometimes, so I have to repeat what I said twice or more. It’s pretty funny but not really efficient. 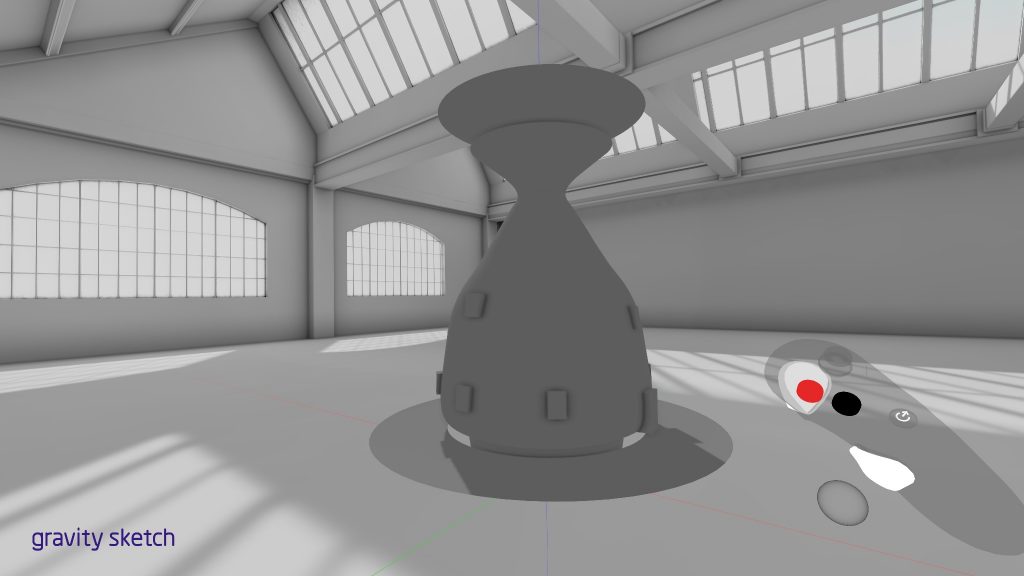 So, I basically made a base sketch for the structure, modeled a few wooden planks, some straight and some a bit curved. 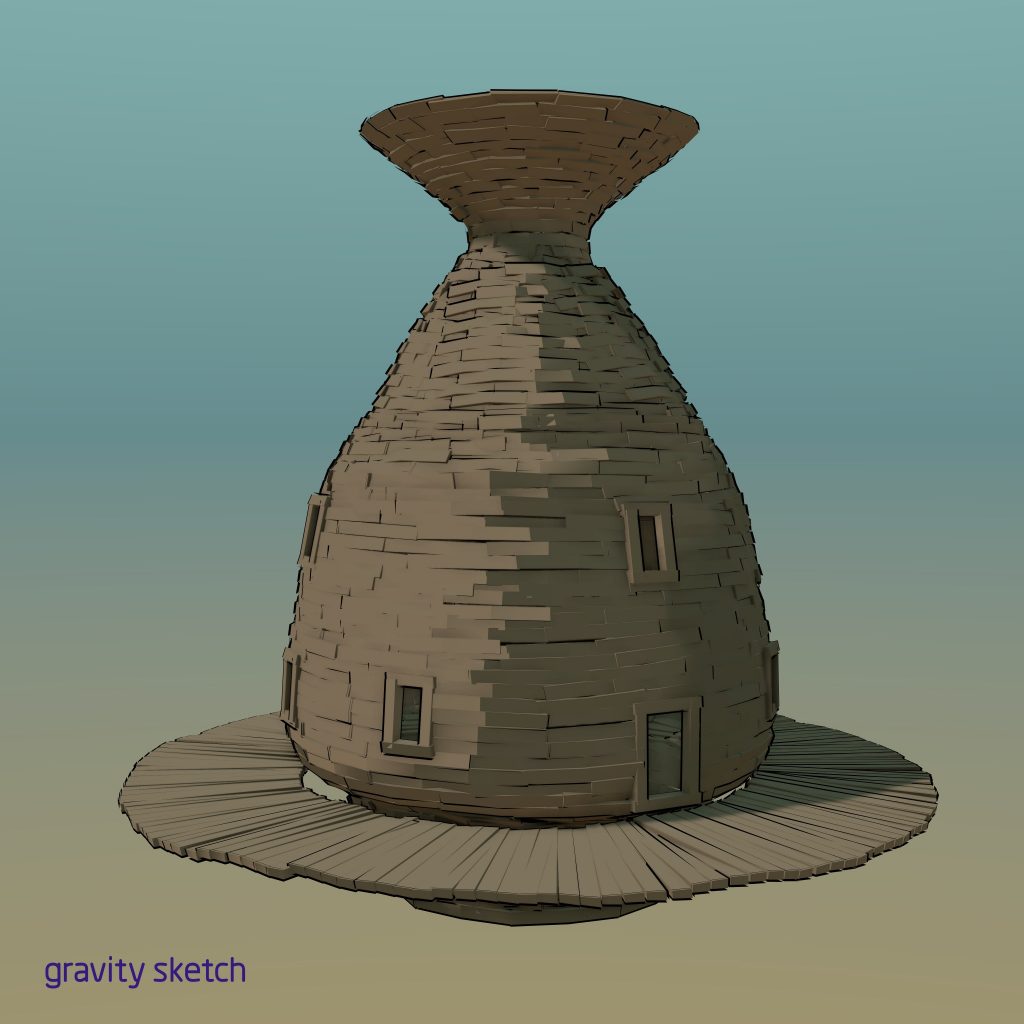 Then, I duplicated them along the sketch. It took me 15 or 20 minutes to make two main building variations, and a kind of leaf that I didn’t use at the end. 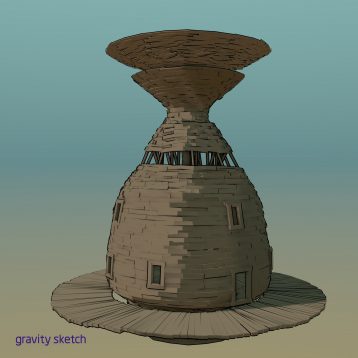 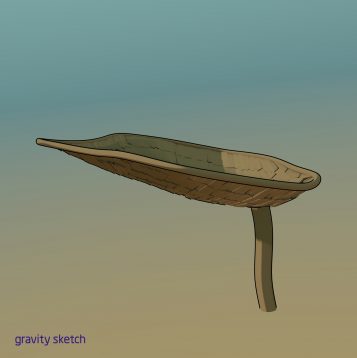 Next, I directly jumped into Blender to build the scene.

As the scene takes place on water, I put a simple plane with a basic water-like shader to get a first idea of what the area looked like. 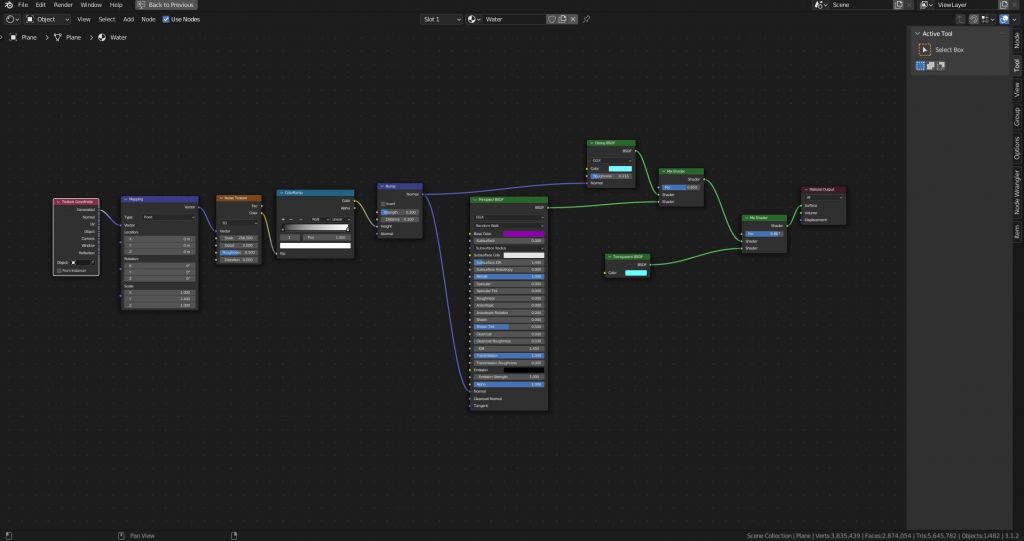 For the lighting, I used the Physical Atmosphere add-on which has a pretty nice visual and a lot of friendly options to use.

Then, I put my camera to start working on asset placement as I knew the scene will be horizontal, with a horizon line around the middle. 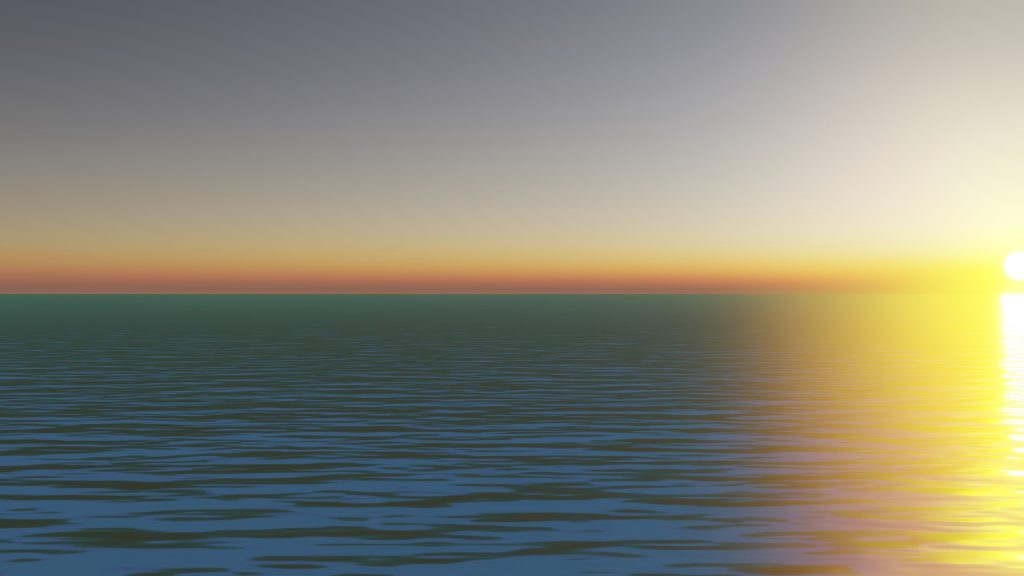 Generally, I work with two viewports. One in solid mode, and the other in rendered mode with my camera active. I found this layout more usable as I always saw what happened in my “final” view when working on the solid one. Eevee magic was so convenient for this.

Once the base was made, I started to build the stage. I placed my main assets on the left part of the image to let some room in the right part for other stuff while creating a more living place.
I kit-bashed some scavenged houses I made for an ancient project to have some living areas in the background and to create more context for the scene. The stilts are just cylinders below, though it’s not noticeable in the distance.

The wind turbines were just copy pasting the same one to add more hints on how the people were processing and using energy. We’re still in the near future, so even though a cataclysm has hit the world, there are still people who know how to convert energy to electricity.

The palm trees are also from an asset I made in another past project which I found useful. At the beginning, I didn’t plan to put natural stuff in the scene, but once I started to flesh the city, it became clear that it felt more natural and logical. 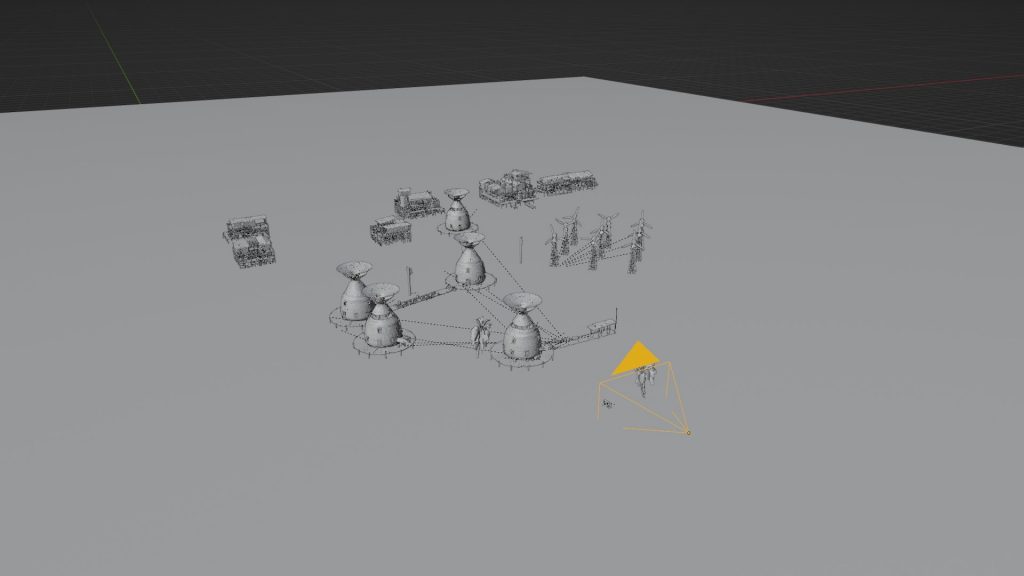 The textures are mainly PBRs from an old image pack I have from Poliigon, in which I always find some useful ones. 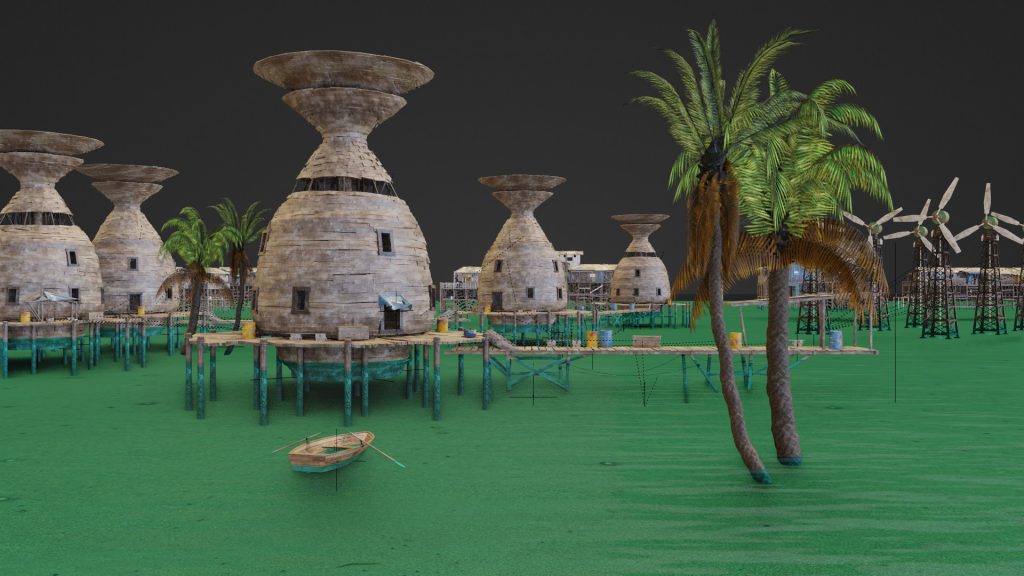 Before rendering the base plate, I tweaked the lighting a bit and added some atmosphere to get some depth. Nothing fancy, just a cube with a principled volume shader. I also put a reflection probe on the water plane to have a slightly realistic feel on the water. 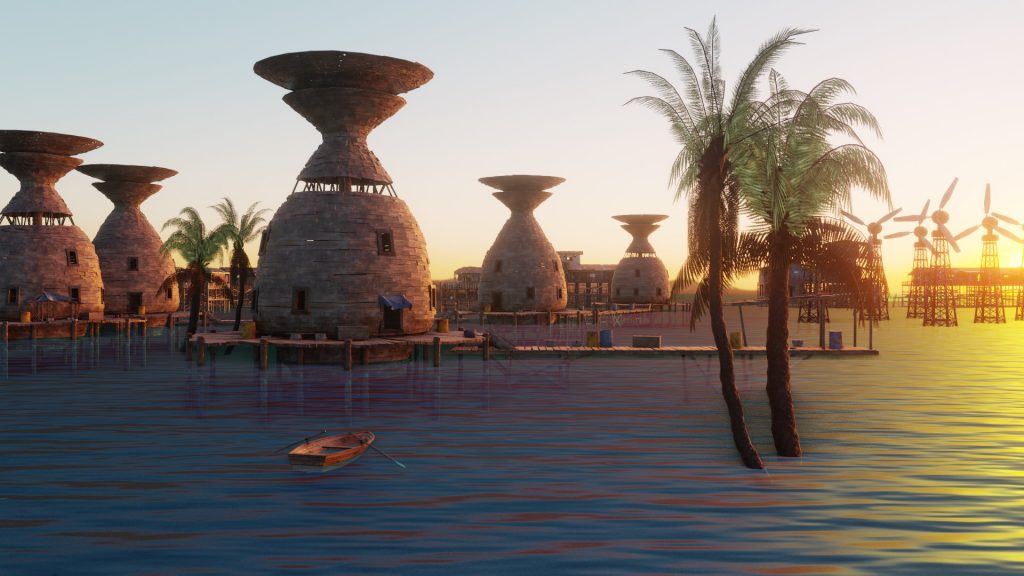 Generally, I always take some time to work in the compositor to tweak other stuff like AO, Mist and shadow pass, but not this time. I just used a color balance node to pull a bit more of the color vibe I wanted for the final image. 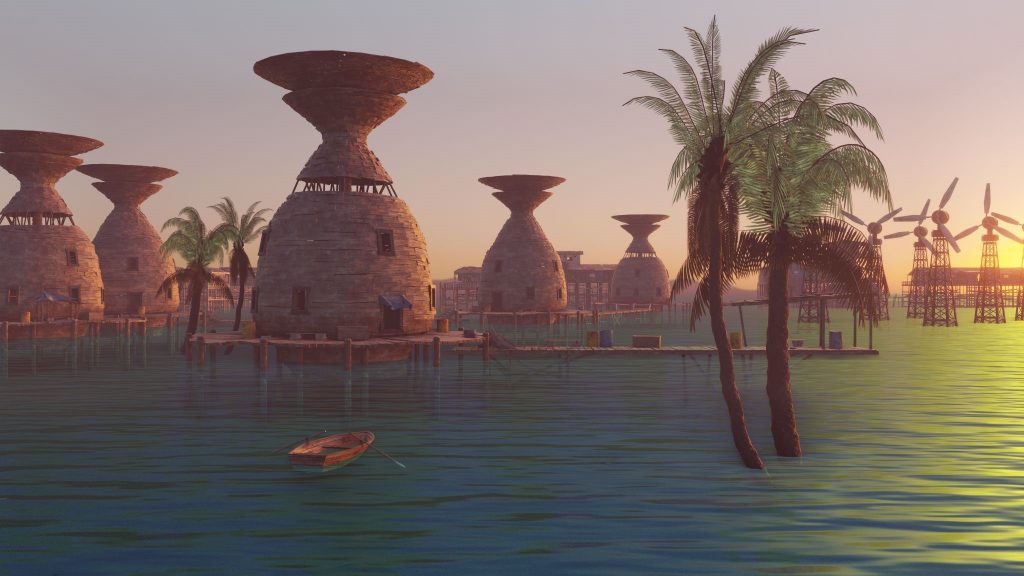 The final part is always jumping into photoshop for post work.
I started to photo-bash a new sky (the original picture came from Pexels), and tweaked the overall lighting. 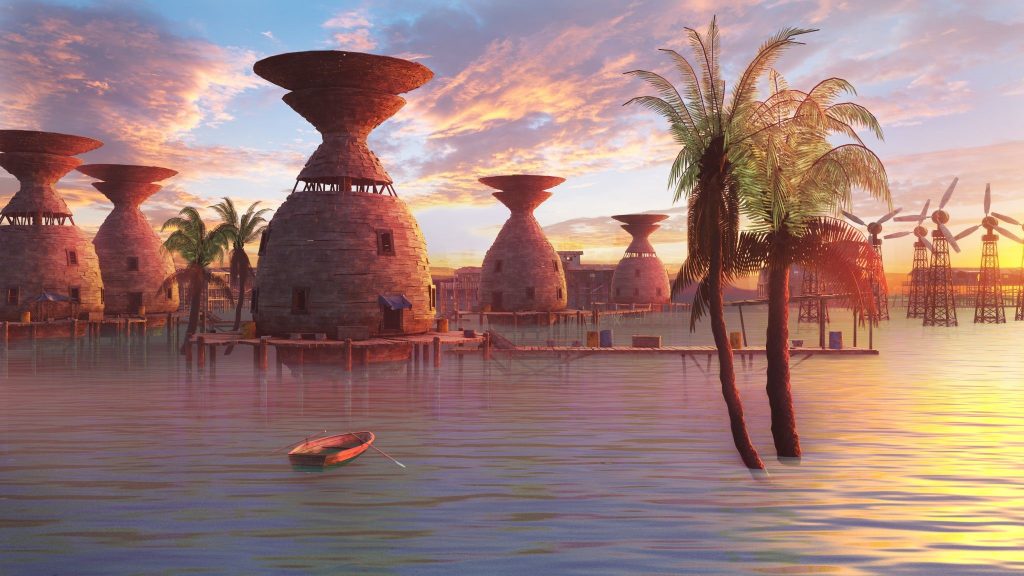 I also added a few photo bits from a real stilt village in the background to accentuate the size of the city.

Then, I reworked the water by photo-bashing real reflections and overpainted with a squashed brush.

A few people, some floating plants, props and garbage were also hand painted over the render to give the scene more life. And the most important, I added a bit more fog and mist between the planes to add a bit more depth again. 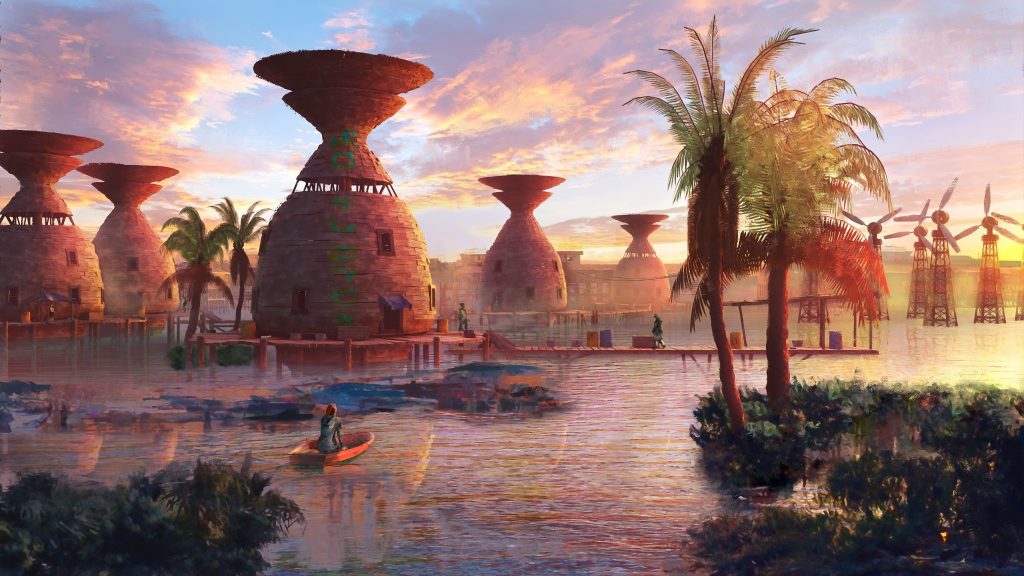 I put an easter egg in the scene for people following Ian Hubert. The text on the first building is saying “Delta City '' with the Huberfish font. This font has been shared by Ian on his Patreon and used in many of his projects.

To give a bit more context to the overall work, I also made a simple callout with a top view from the scene and a bit of story.

The top view was composed with a render from the scene and a Google Earth screenshot from a real stilt village in Africa, in a water triangle to keep the Delta idea in the presentation. 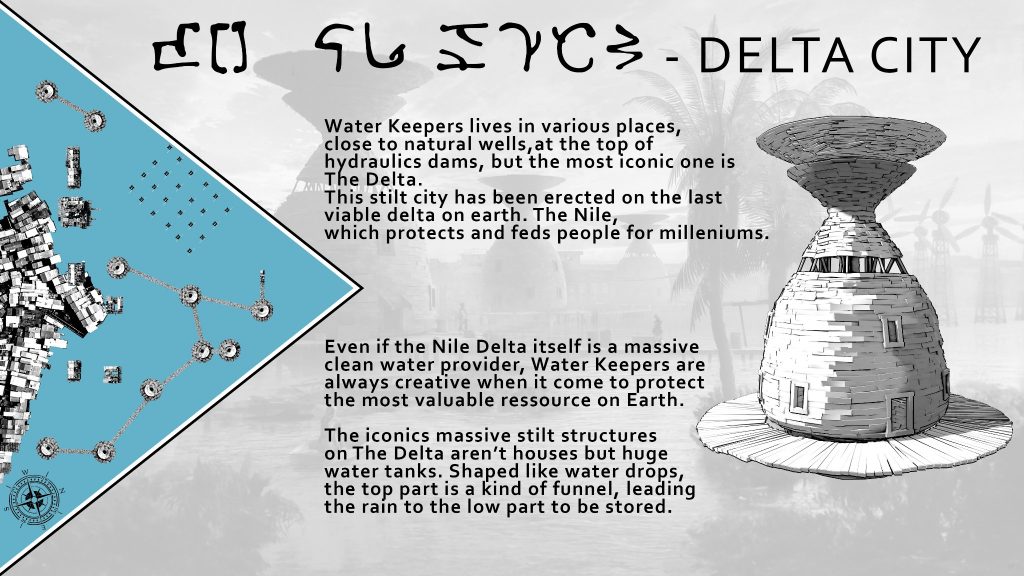 The overall process was pretty quick as I did not have so much time to make this illustration between work. So it only took around 4 hours of work from the Gravity Sketch part to the callout.

Before finishing the image, I’m always making a bit more post work and grading. Here, I added a few masked color lookup layers, and on top, a final pass in Camera Raw Filter, Blurs with the blur gallery, and a bit of lens distortion. 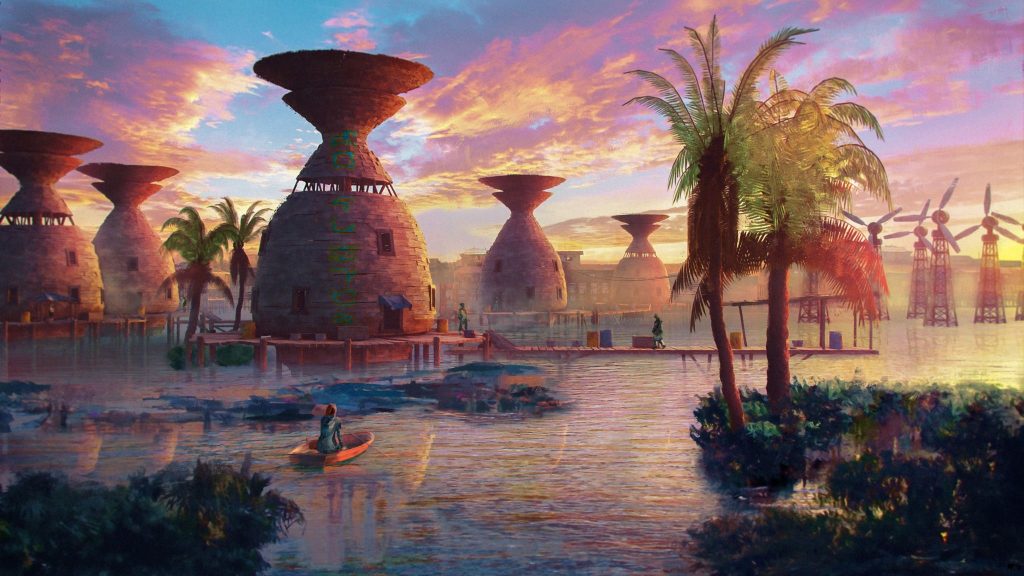 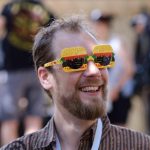 Mao Mornity (Fabien Brochard), is an Environment and VFX concept artist, Blender addict, Instructor, a proud father and husband, and a geek most of the time. 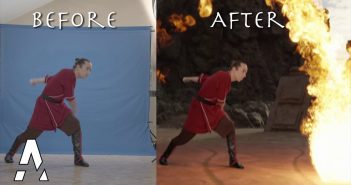 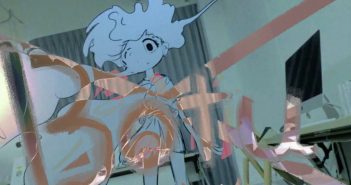