Hi, my name is Jörg Grubmüller. I’m a 3D Artist and Motion Designer based in Vienna. I studied Media Technology and Design and have been working as a Freelancer in the Motion Design and VFX Industry ever since.

After several years of working with 3ds Max and everybody getting excited about Blender, I thought I should give it a shot and try it out myself. What can I say… It was a mind-opening experience! There were so many things missing that I loved about Max, but I had so much fun using Blender that I immediately fell in love.

I had some time between projects, so I started to work on personal pieces. When I saw this inspiring illustration by Derek Laufman on Instagram, I thought I’d give it a try and bring this scene to life in Blender.

I started modeling the island by placing some low poly rocks, which I modeled from a subdivided box matching the reference, with a little procedural displacement to get some random formations. 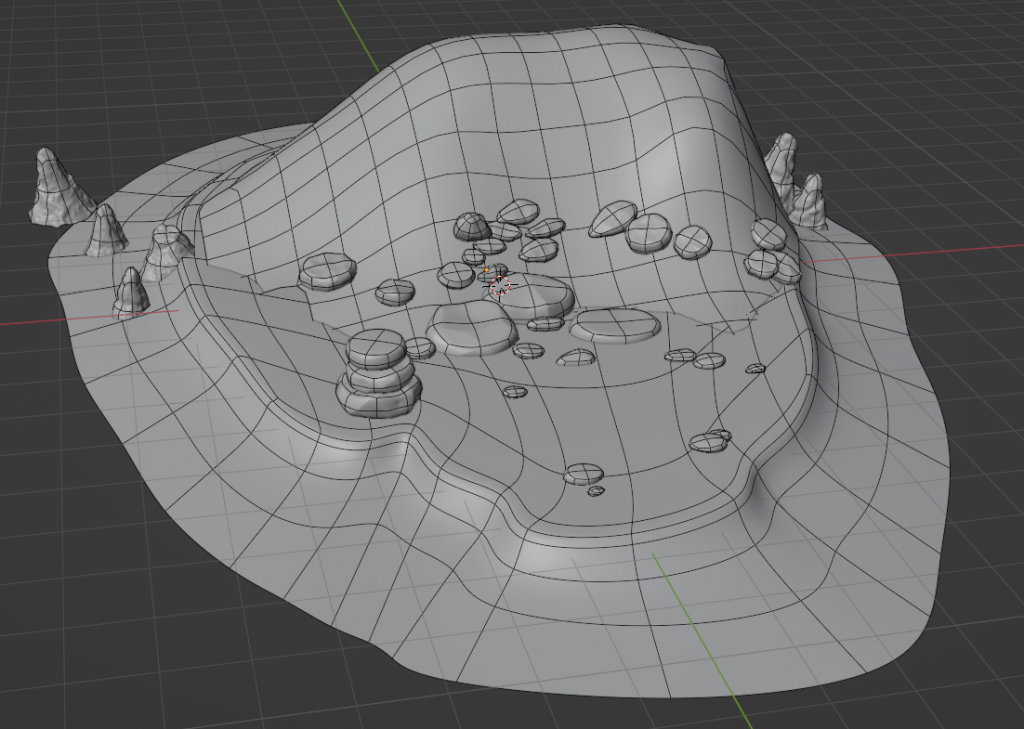 The heap of coins was modeled from a plane with a particle system to scatter my low poly coins on the surface. I used a displacement modifier to push the faces of the heap back a little to avoid intersections of the coins with the heap geometry. This is a pretty basic setup and the coins themselves are intersecting, but it works from a distance and this is what matters. As for the mountains in the background, I used the Landscaper add-on to generate some random formations. 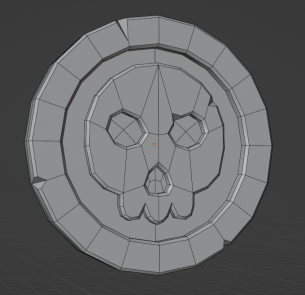 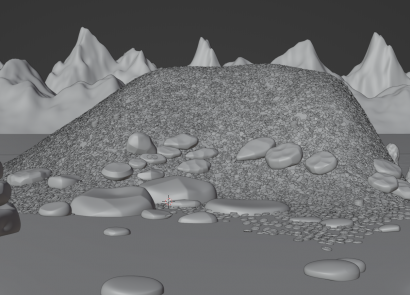 I modeled some more assets and placed them in the scene. Most of them are low poly except for the treasure chest where I used a Multires modifier to sculpt in some bumps and dents on the metal rim. 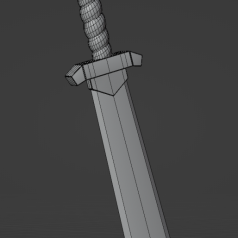 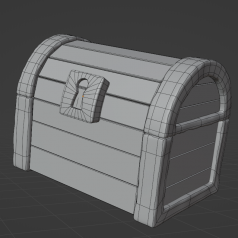 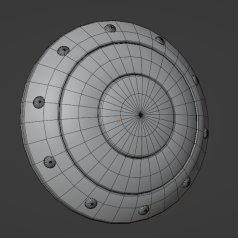 And thus made the treasure pile for the greedy dragon! 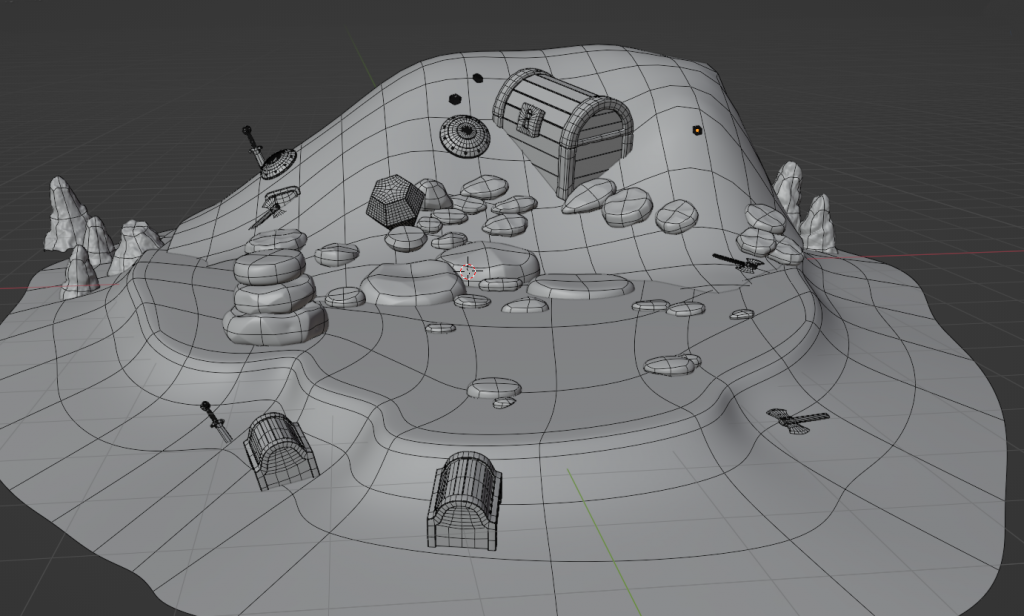 Next, I started working on the Dragon. First, I poly modeled the head with a mirror modifier and a curve for the horns. For the body, I placed a simple curve with a profile following the body flow to get a better idea of the curvature and foot placement. Then I modeled a single body segment with one of the back spikes and used an array modifier and a curve modifier, following the reference spline I had already created, to get the basic body shape. Then I collapsed the array modifier, deformed the shape to match the reference, and compensated for the stretching caused by the curve modifier.

The basic leg shape was done using a skin modifier. Then I collapsed the modifier stack, connected the feet to the body, and sculpted some details on the head and body using a Multires modifier. 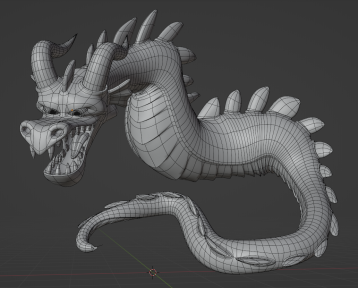 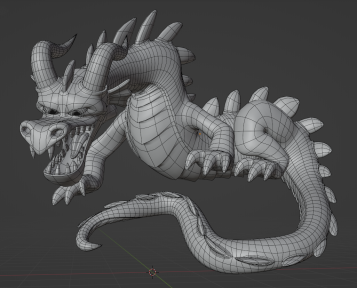 For the final touches, I used some nice dinosaur skin brushes. 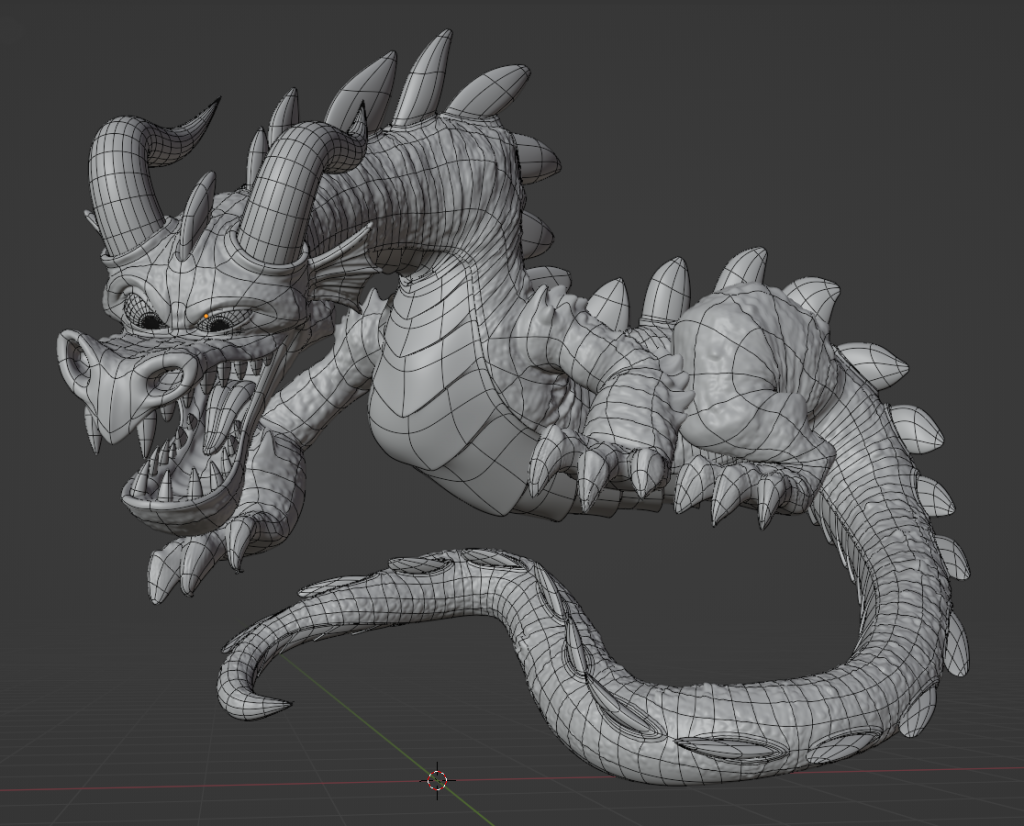 The same techniques were used in modeling the mouse––box modeling for the head, and skin modifier for the basic body. Then I merged the head and body and used a meta rig to pose the character while adding a hair particle system for the fur. I modeled the basic shape for the cape and sculpted some details and wrinkles on top of it. 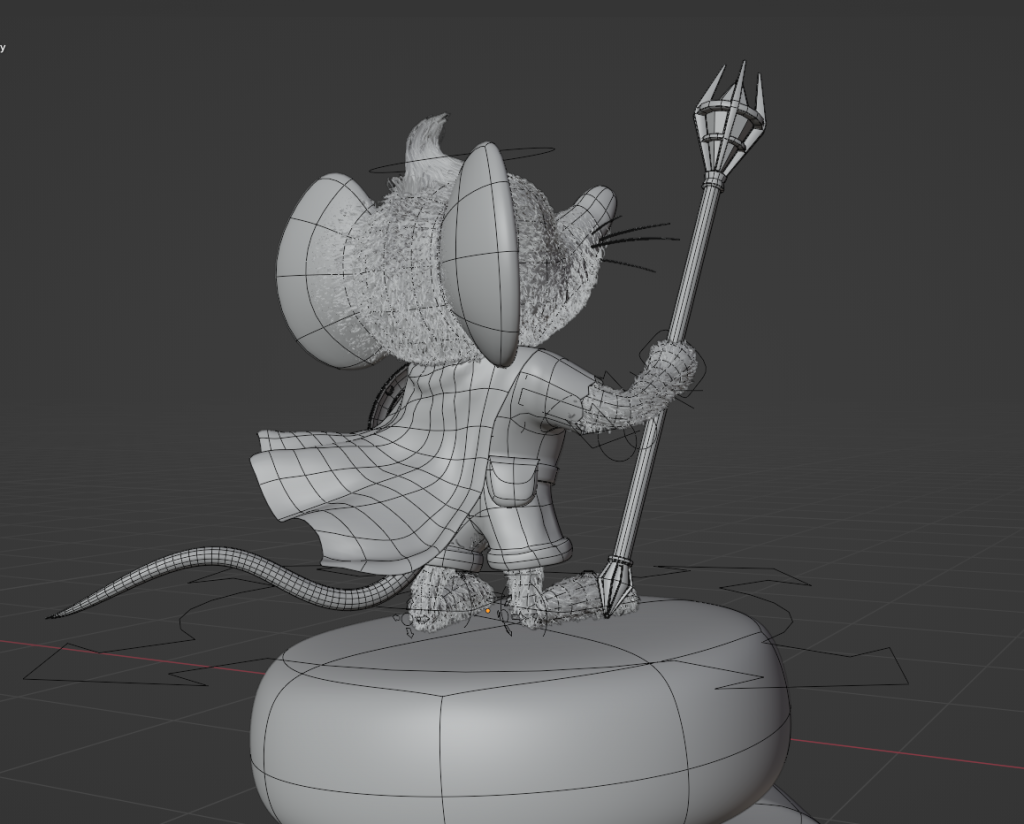 I found a pretty nice rock texture that I used on the island––the rocks and stone formations. For the dragon spikes, I used a couple of procedural Noise and Voronoi textures to generate the cracks and painted color variations to get some more detail on the dragon skin. I also used a mixture of procedural textures to create the dragon eyes, the ocean, the gold material, the horns, and the belly of the dragon.

And here comes the most important part––lighting the scene.

The original image is in daylight but I wanted my scene a little bit more moody and dark so I decided to do a night shot. I quickly realized there is a lot of stuff going on in the scene, lots of small details and colors catching the eye. I tried to guide the view and highlight the important parts of the scene. Hence, I started with a strong cool rim light coming from the moon to separate the main shapes from the background. 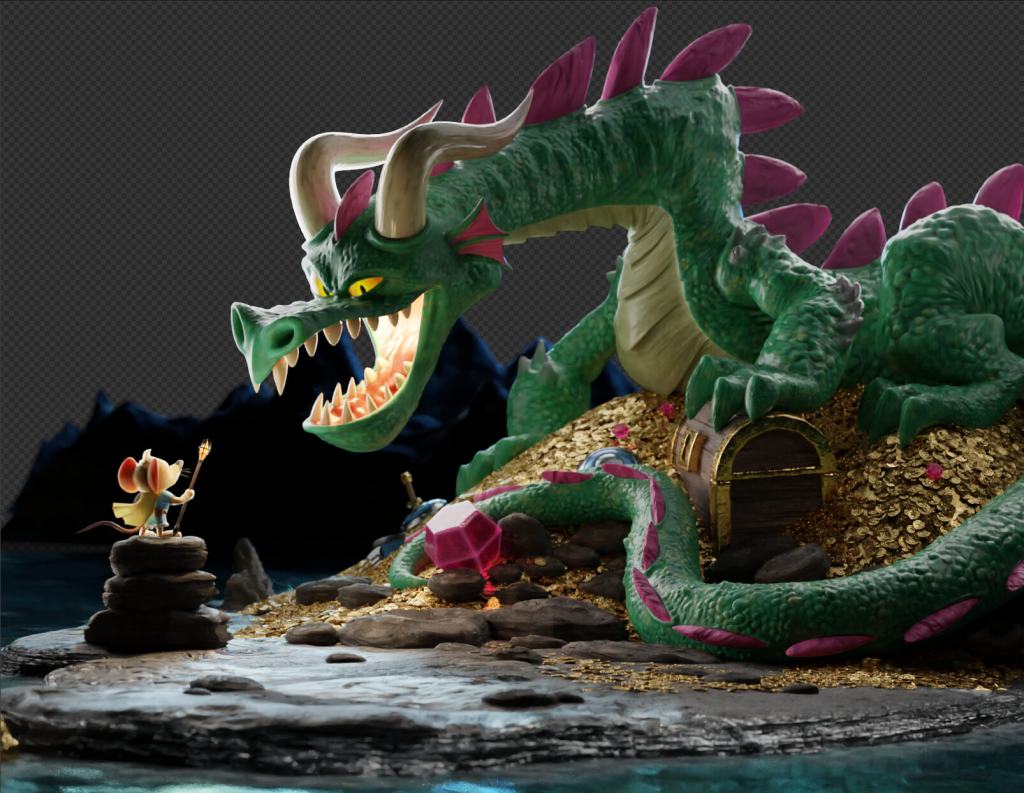 The mouse is pretty small compared to the massive body of the dragon. To highlight the mouse, I simply replaced the blade with a magic staff radiating warm light and illuminating the dragon head and the mouse itself. Then I thought… What if the dragon is seconds before breathing fire? I just tried and placed a light in its throat, illuminating the mouse even more while guiding the view and telling a story. 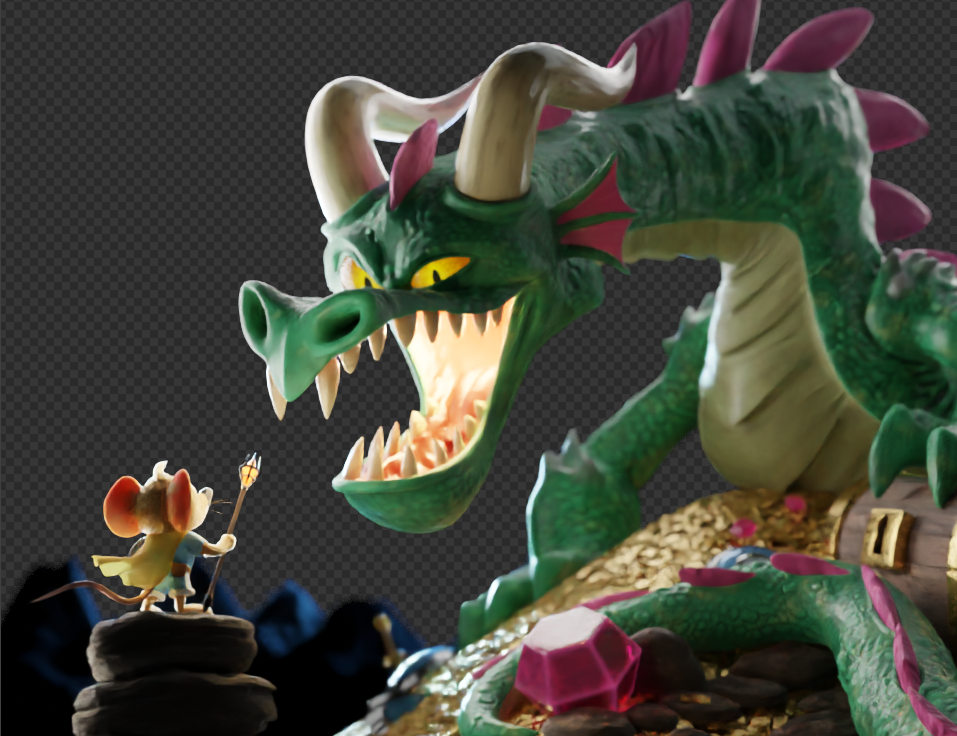 A big soft toplight and some brighteners on the sides to round things up.... and that was it. 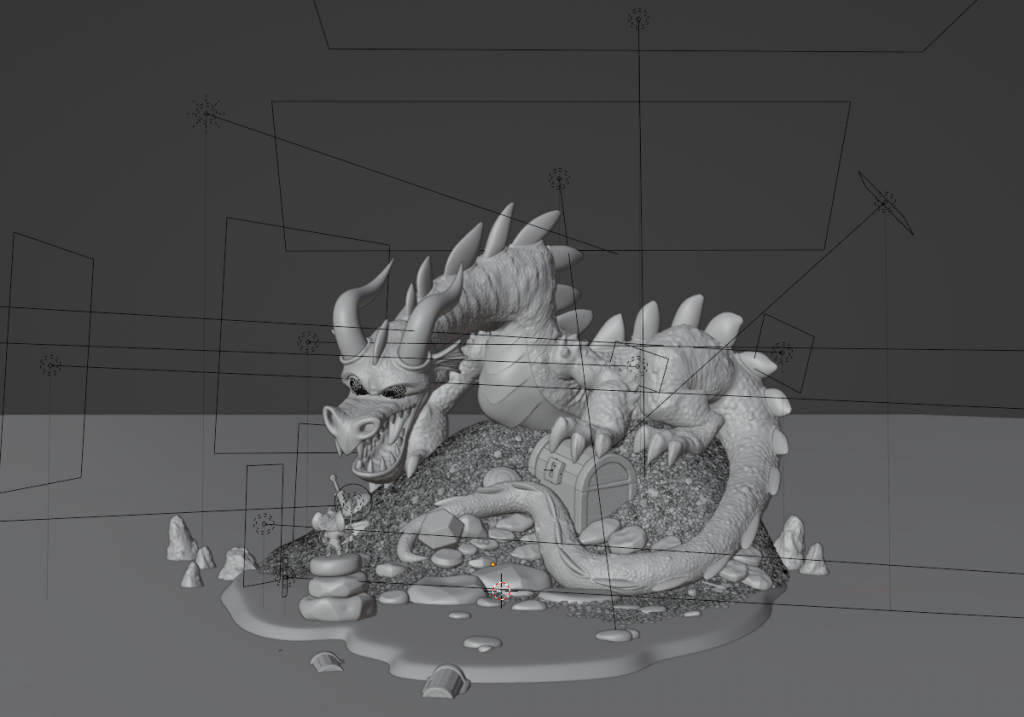 I rendered the scene with cycles, placed an image of a cloudy night sky in the background, and did some basic color grading in photoshop (plus some light rays of course).

I love working in Blender. Shading and lighting are made so much fun with a real-time viewport display that changes instantly. 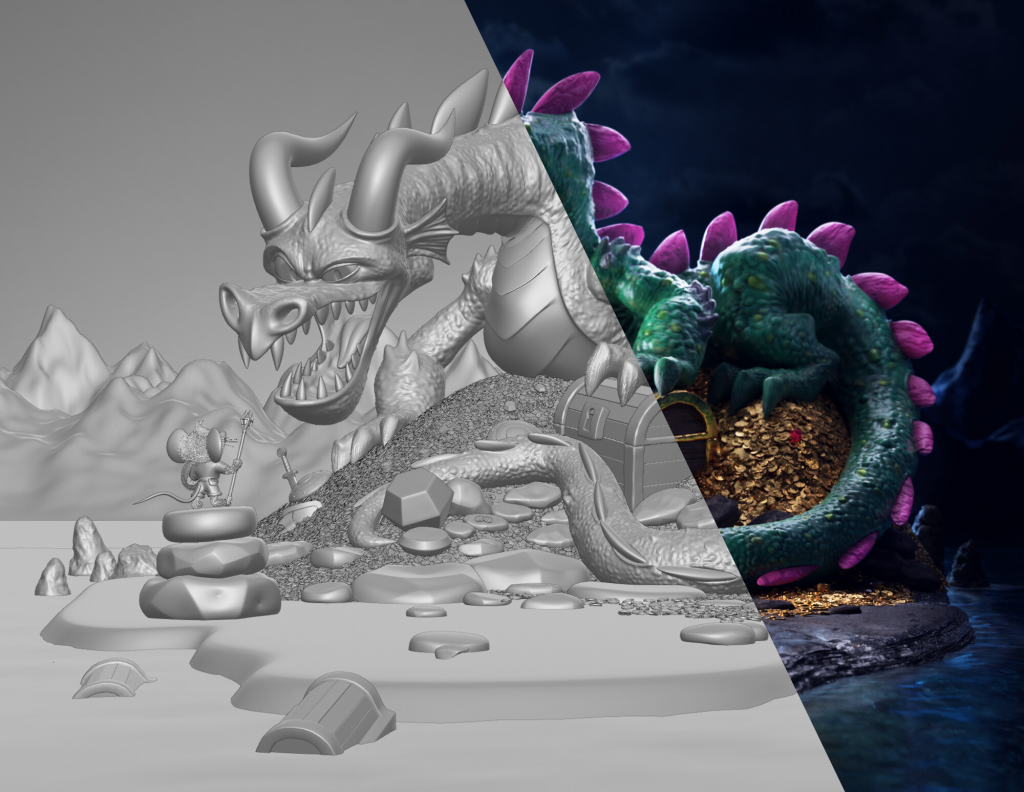 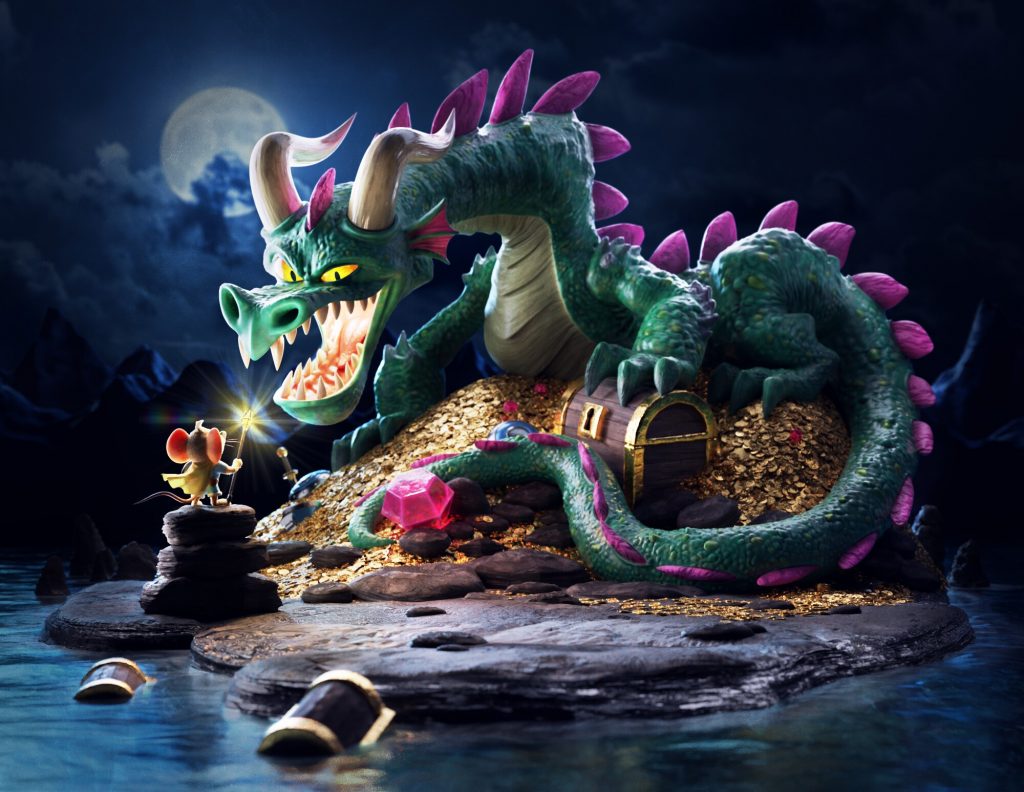 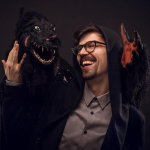 Jörg Grubmüller, is a 3D Artist and Motion Designer based in Vienna. 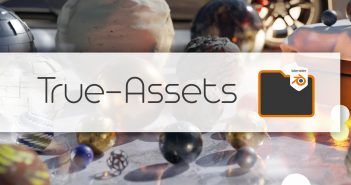 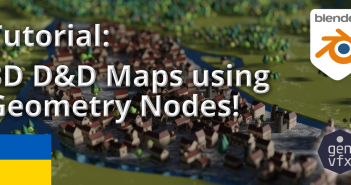