Hello, my name is Peter Černý and I'm from Slovakia.

My work background is as a garden and landscape architect. I started with basic 3D creation during my study of landscape architecture but with non-Blender software. But this software did not satisfy my 3D work needs. I have always been fascinated by detailed 3D CG works in which the details of the individual elements together create a harmonious whole.

I first came into contact with Blender in version 2.72 in 2015 and found that it suited my wide variety of uses.

Currently, I work as a landscape architect and a 3D freelancer with a passion for working in Blender. I also cooperate with Polygoniq to create some models for their Botaniq add-on.

The idea behind the project

I like history and I had long been playing with the idea of ​​creating a medieval timber-framed building with a fantasy look.

The idea for creating a watermill came after the creation of my medieval tavern. I chose a water mill because it offers lots of opportunities to experiment with details, such as the capture of water movement, the wheel itself, and capturing life on the mill.

I wanted to place a watermill in an area away from the road, in the surrounding nature, within a medieval meadowy-forest environment.

Here are some of my reference images for the watermill: 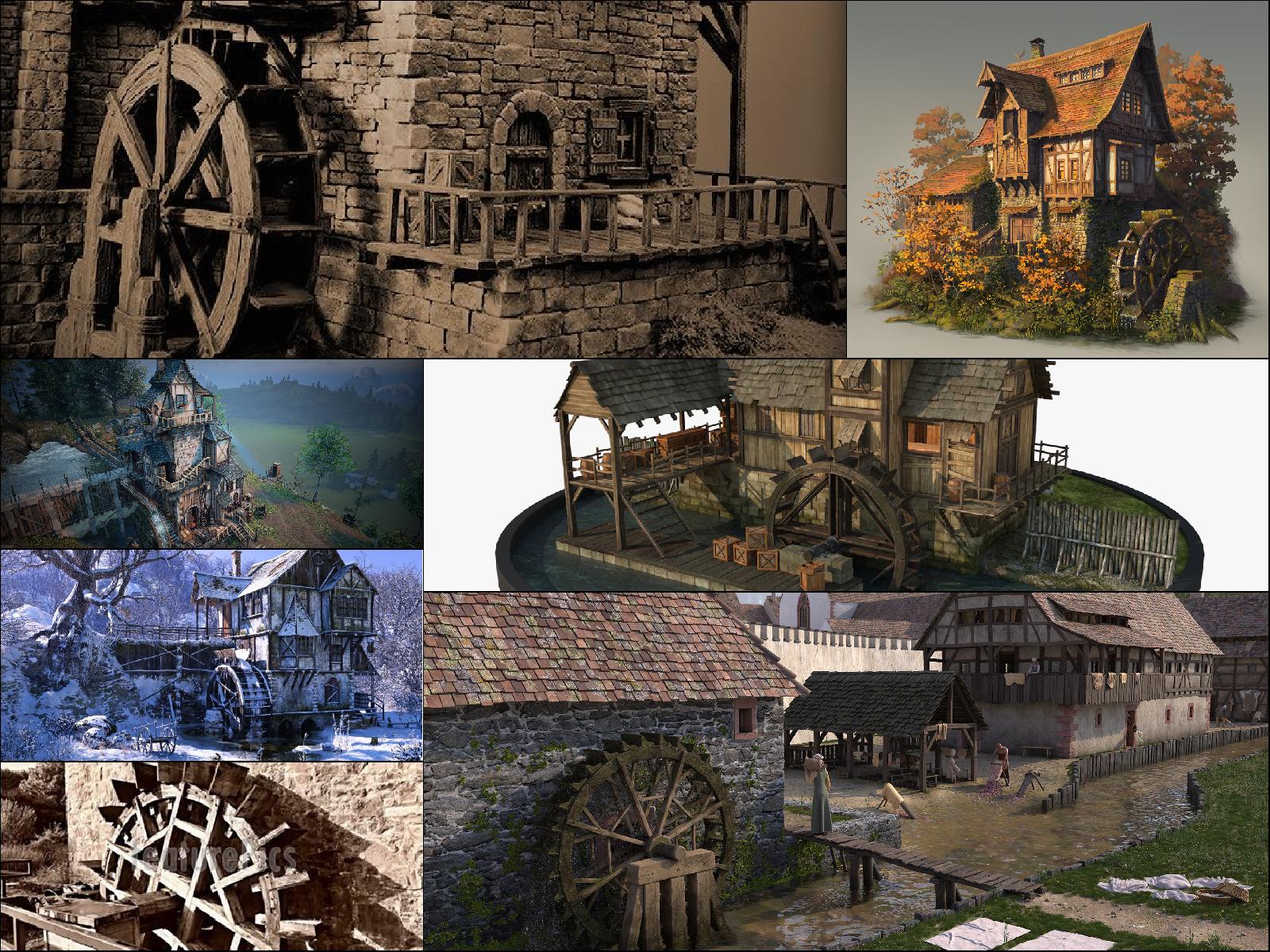 I started the creation of a water mill with the development of the building’s individual functional units, such as the living area, working area, stock area, and so on. 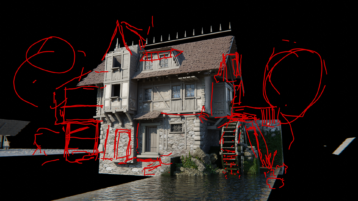 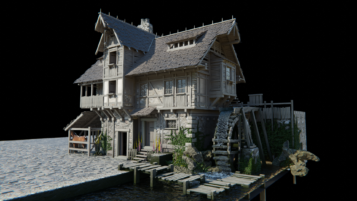 For the rough construction, I used a box with several loop cuts. The wooden timber frame and other wooden elements are boxes with added bevels. I adjusted the shapes slightly so that the elements would not look unrealistically perfect.

For adding a little bit of detail to the scene, I added a wooden bay window on the side of the watermill and dormers on the roof for the pigeons and ventilation. Both these elements are typical for medieval architecture. I also modeled a wood timber frame with wooden planks and other helpful parts. 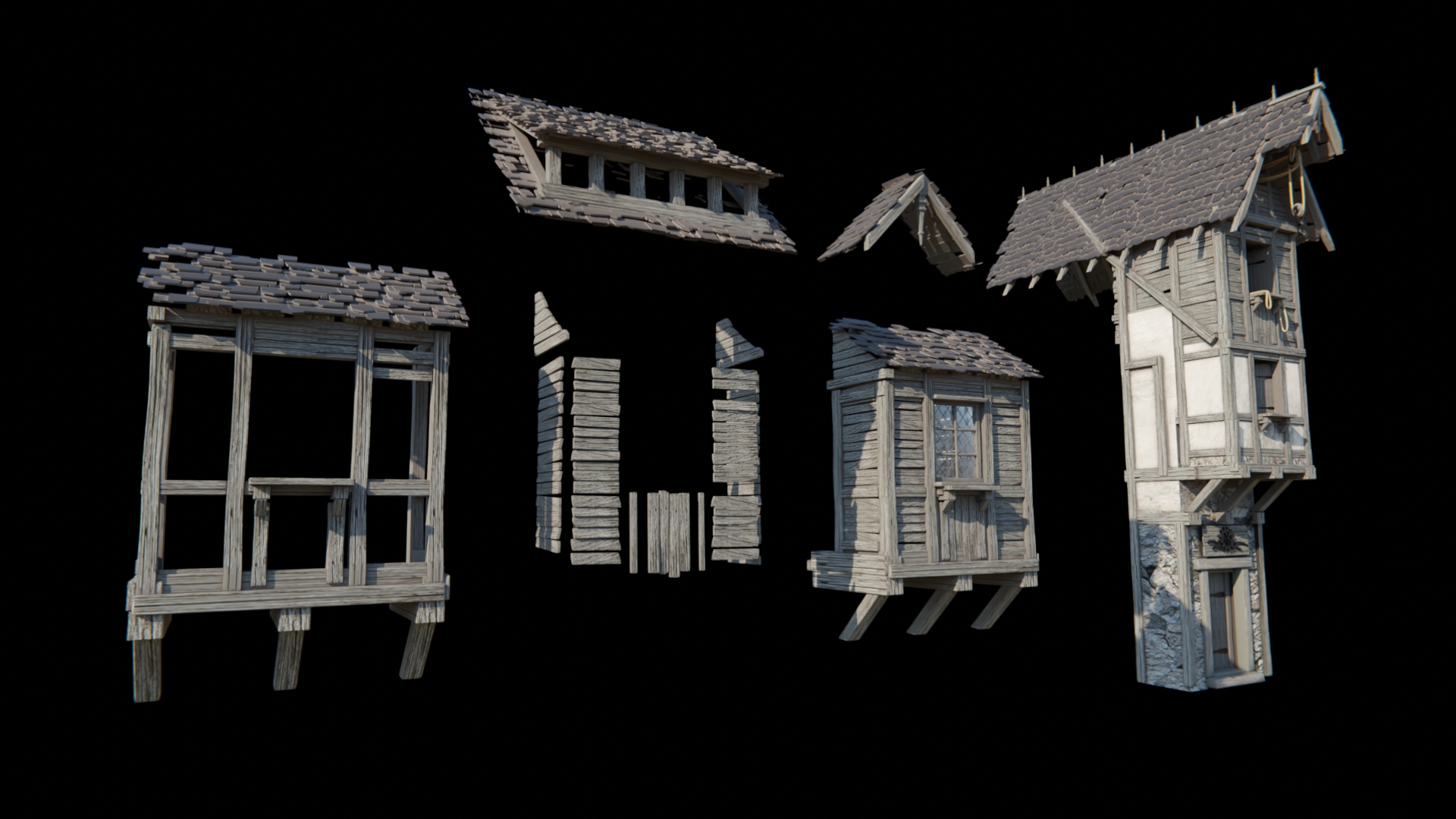 I used a simple Curve Bezier and Curve Circle to model the crane hook, pulley, and ropes. 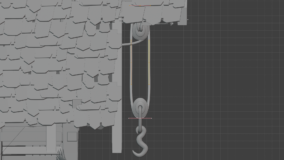 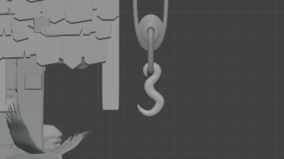 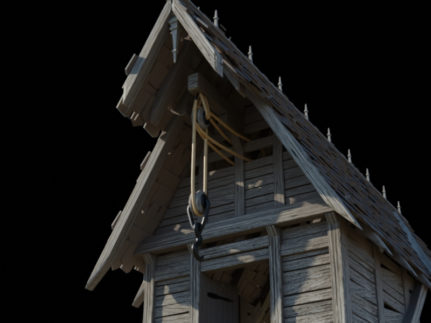 To add some damage to the wall, I used the Knife Tool to adjust the plaster on the wall, extruded a cut-out area, and edited its texture. To create a more realistic appearance, I added some recessed bricks that are also boxes with Bevel Modifier. 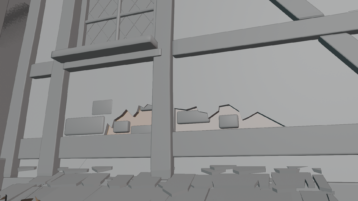 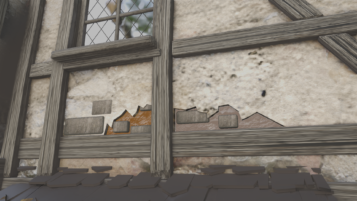 After the basic timber framework of the building, I started to work on details, including the windows that were based on 14th-century windows.

Here are some of my medieval references: 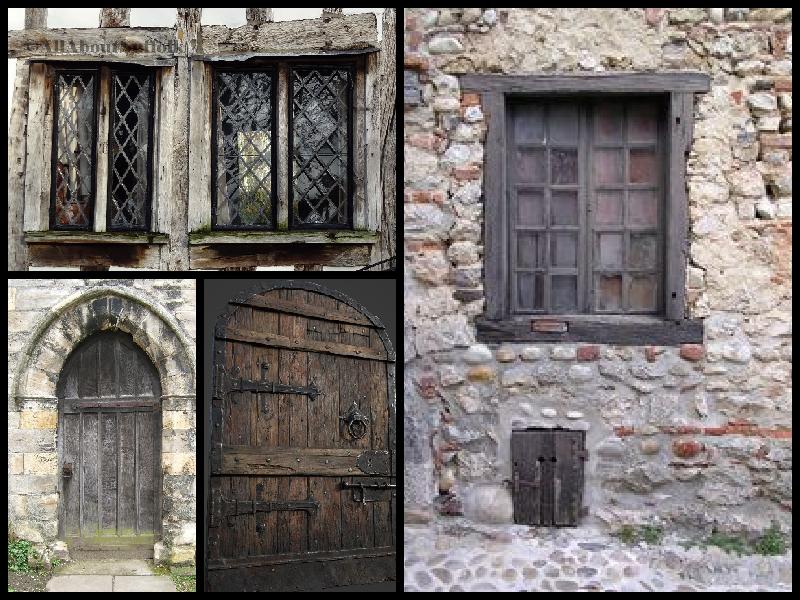 I started with simple modeling of the base window frame with some tweaks of wavy glass material for a much more medieval look. 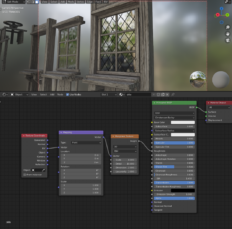 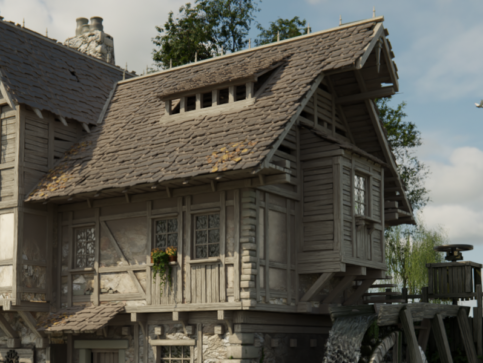 For a realistic roof, I decided to model the shingles instead of using a 2D texture. Each shingle started as a cube. Some of the shingles I adjusted using the Knife Tool to create different shapes and damage. 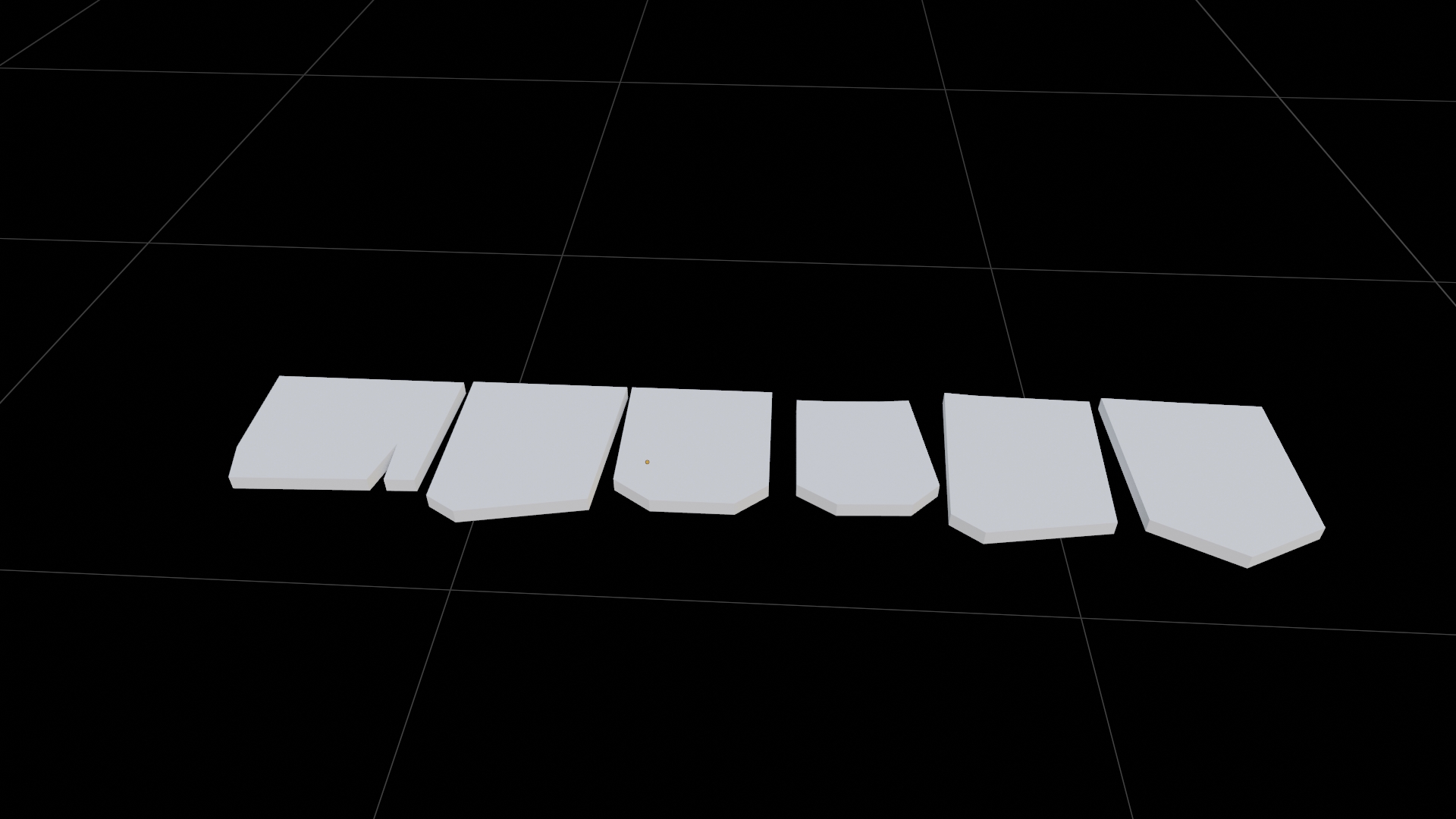 Then I arrayed the shingles in random order, added irregularities to the roof, and introduced bumpy height variation with a proportional editing tool. I subsequently erased shingles in some places to create an occasional absence. 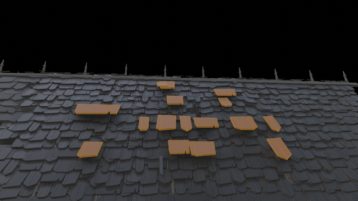 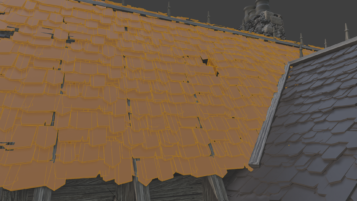 I created the flowing water using particle systems rather than simulation. I created a small model of splash drops at impact and, using Vertex Paint, I defined individual particles for flowing water, falling water, and, at the water level, for the water splash effect. 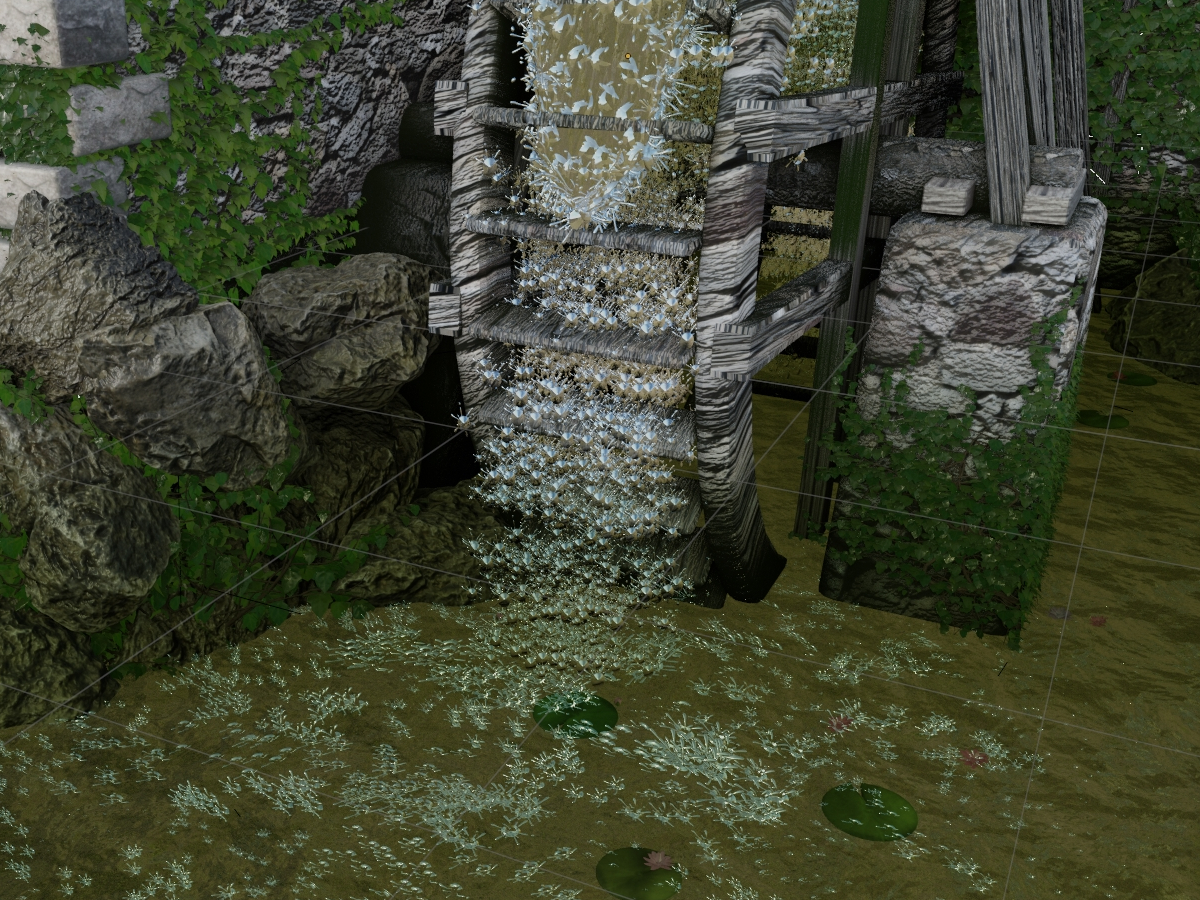 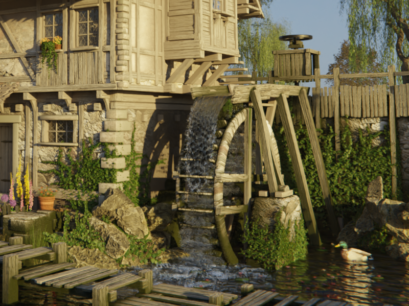 Also at the water level, I gave the illusion of simple waves using a noise texture. 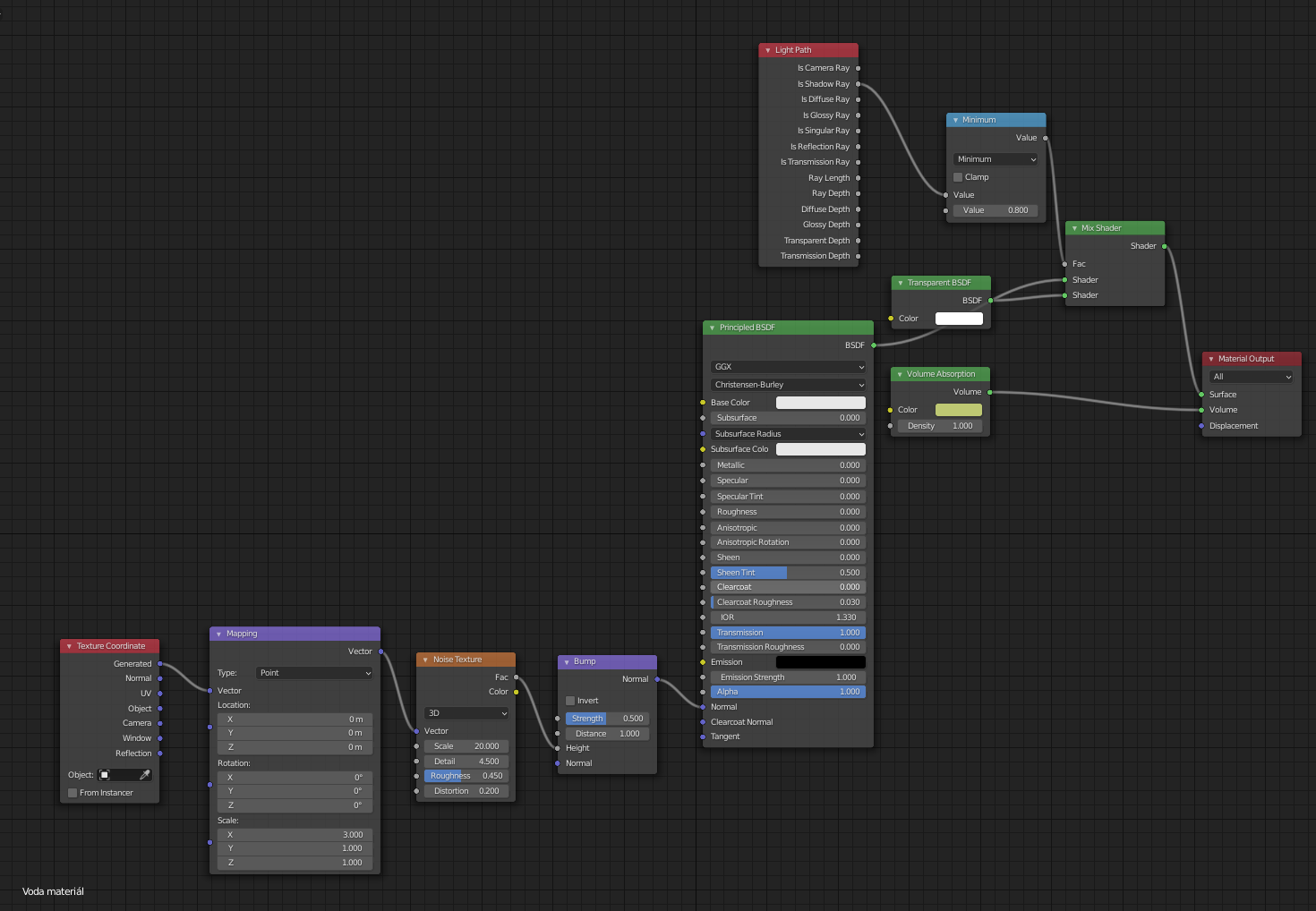 For most of the work, I used the Botaniq add-on to complement the scene with greenery. I modeled the Digitalis and Verbascum plants because their wild look complemented the composition. 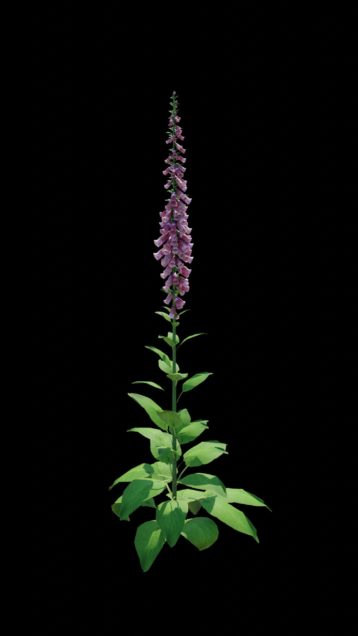 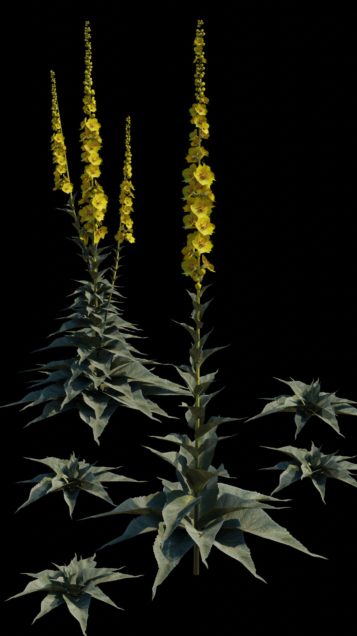 I used Makehuman to model and dress the characters and Monster Mash for animal creation. These tools let me quickly model elements on which the viewer’s attention would not be directly fixed. 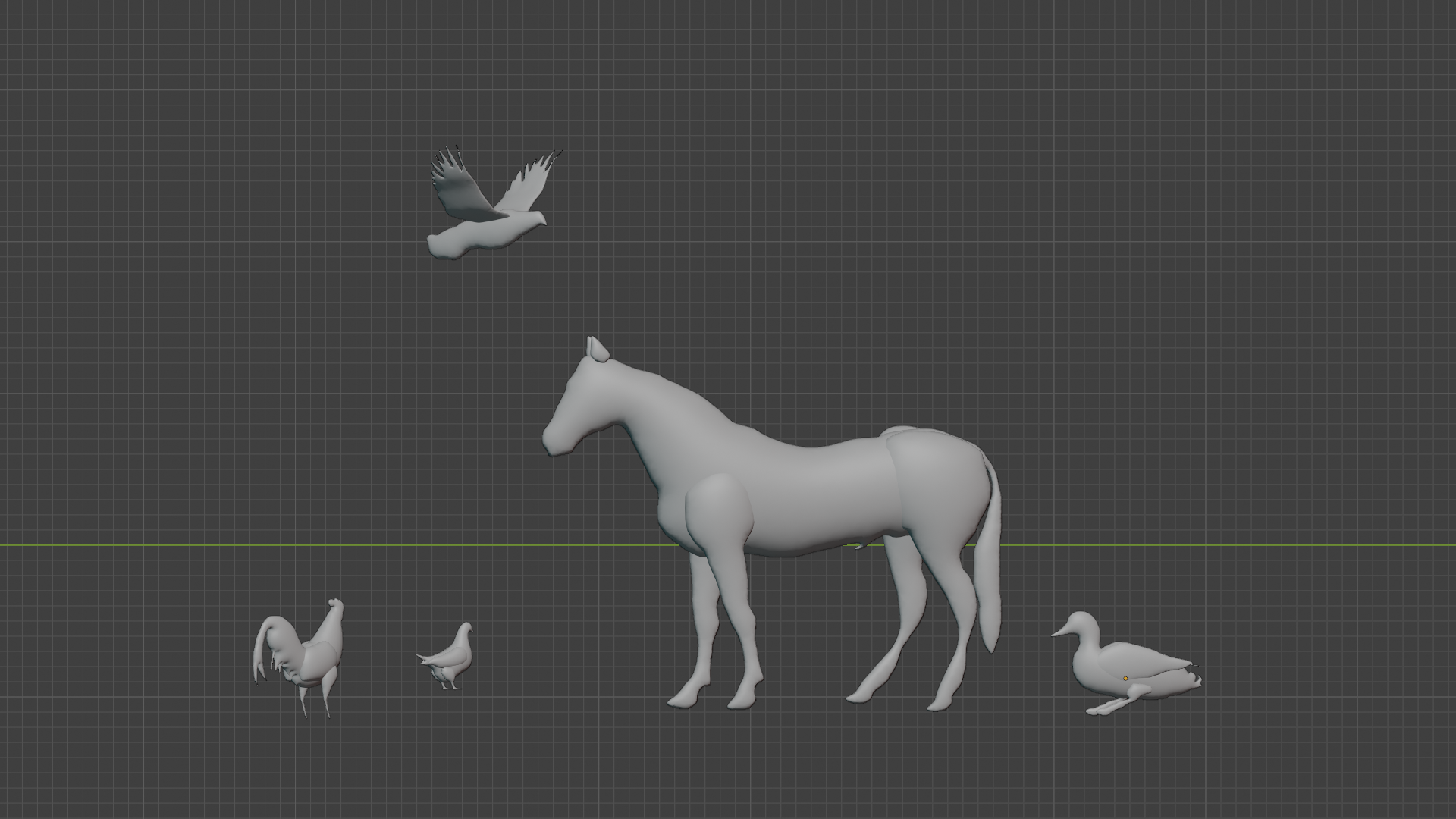 I used a few models from previous work to populate the surroundings: a modified wooden wagon, a heap of hay, and a few wooden barrels.

For the bags of flour, I used a plain stretched box with Subdivision Surface modifier and I made edits with the Sculpt Cloth Brush. 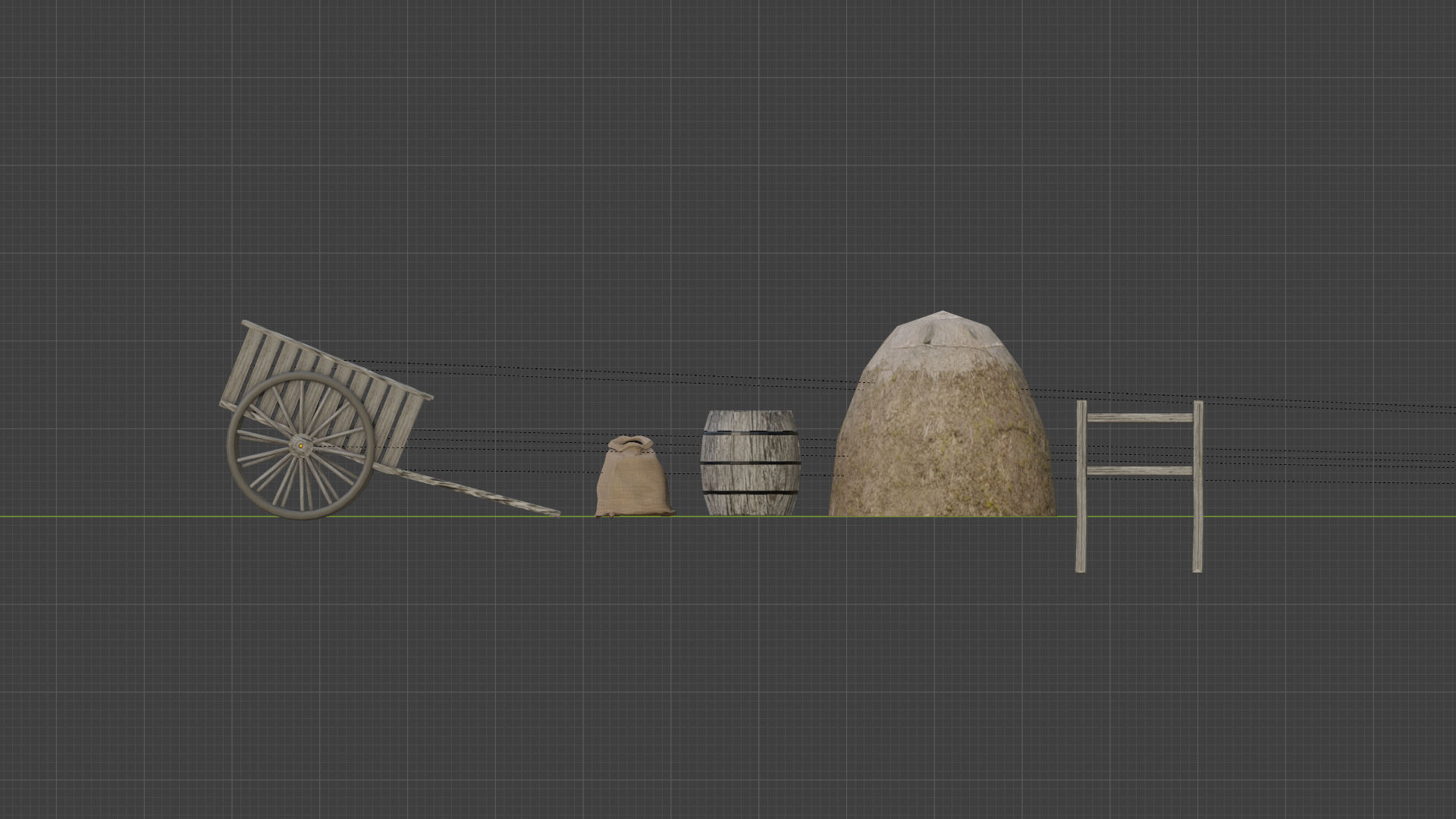 Some other wood assets that were modeled for this scene include the pigeon house, wood planks next to the watermill, and a sluice gate for controlling the flow of water. 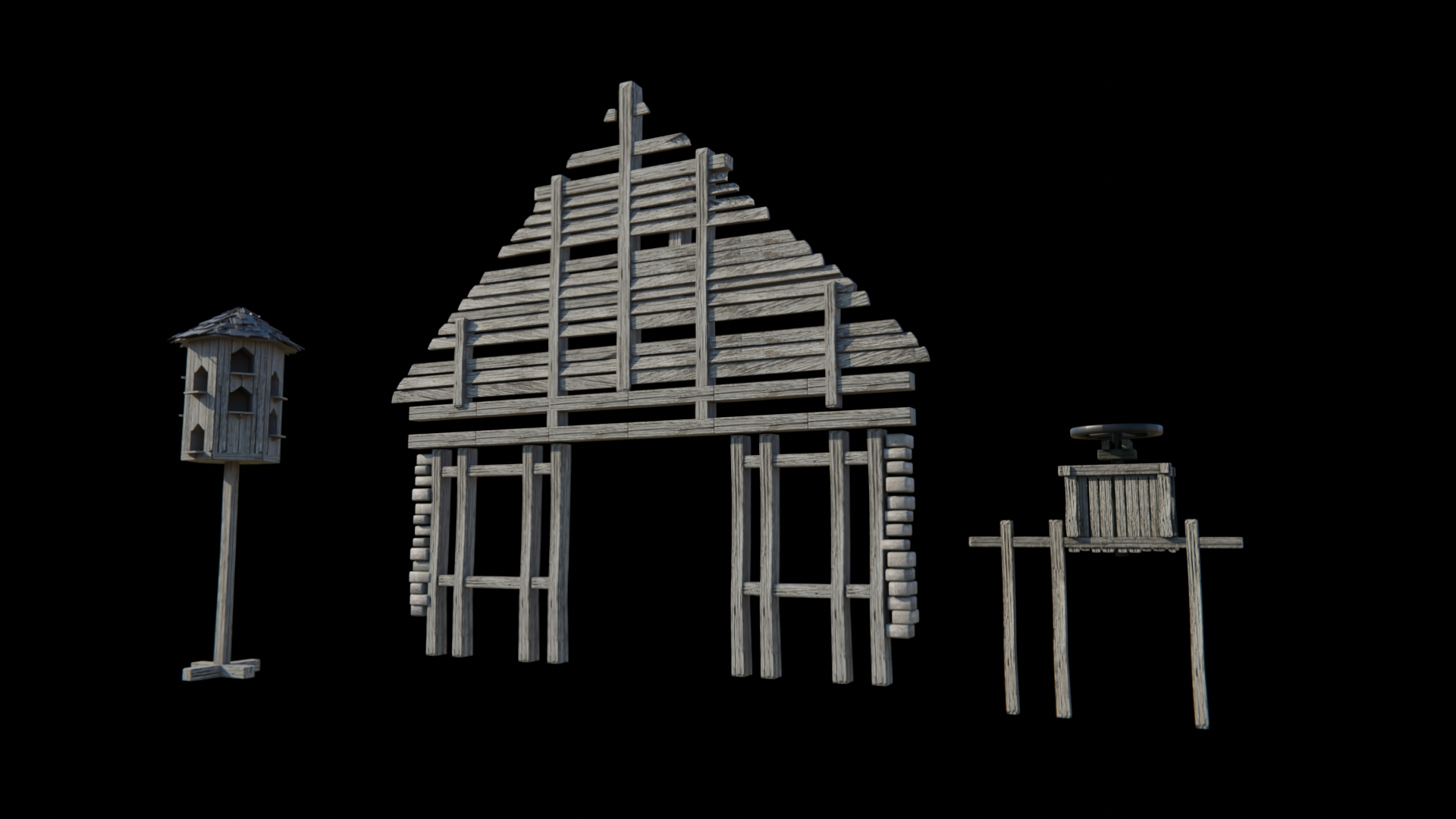 I used three main textures to texture the building: stone PBR texture, old masonry texture, and old wood. Most of the textures are from Poly Haven. My goal was to make the building not too colored because it is a dusty, old watermill. :)

To all major visible elements, I added an ambient occlusion node to give the impression of dirt. For example, I wanted the materials exposed to moisture to look penetrated by algae or dampness. And, likewise, I wanted the masonry near the timber frame to look dusty. 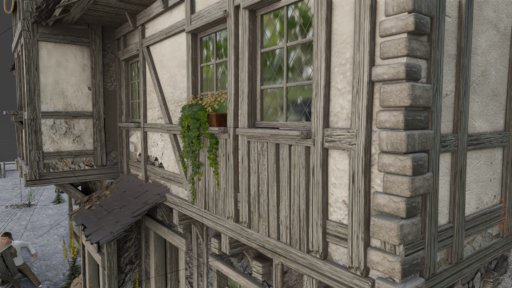 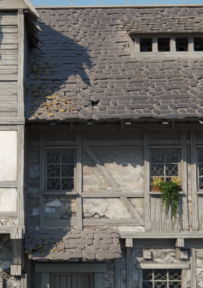 The whole model was created using Blender 2.93.4 LTS and rendered with the Cycles render engine. I used Volume scatter to give depth to the scene. In this morning scene, the density of the volume scatter is higher to give the feeling of a wet foggy morning. 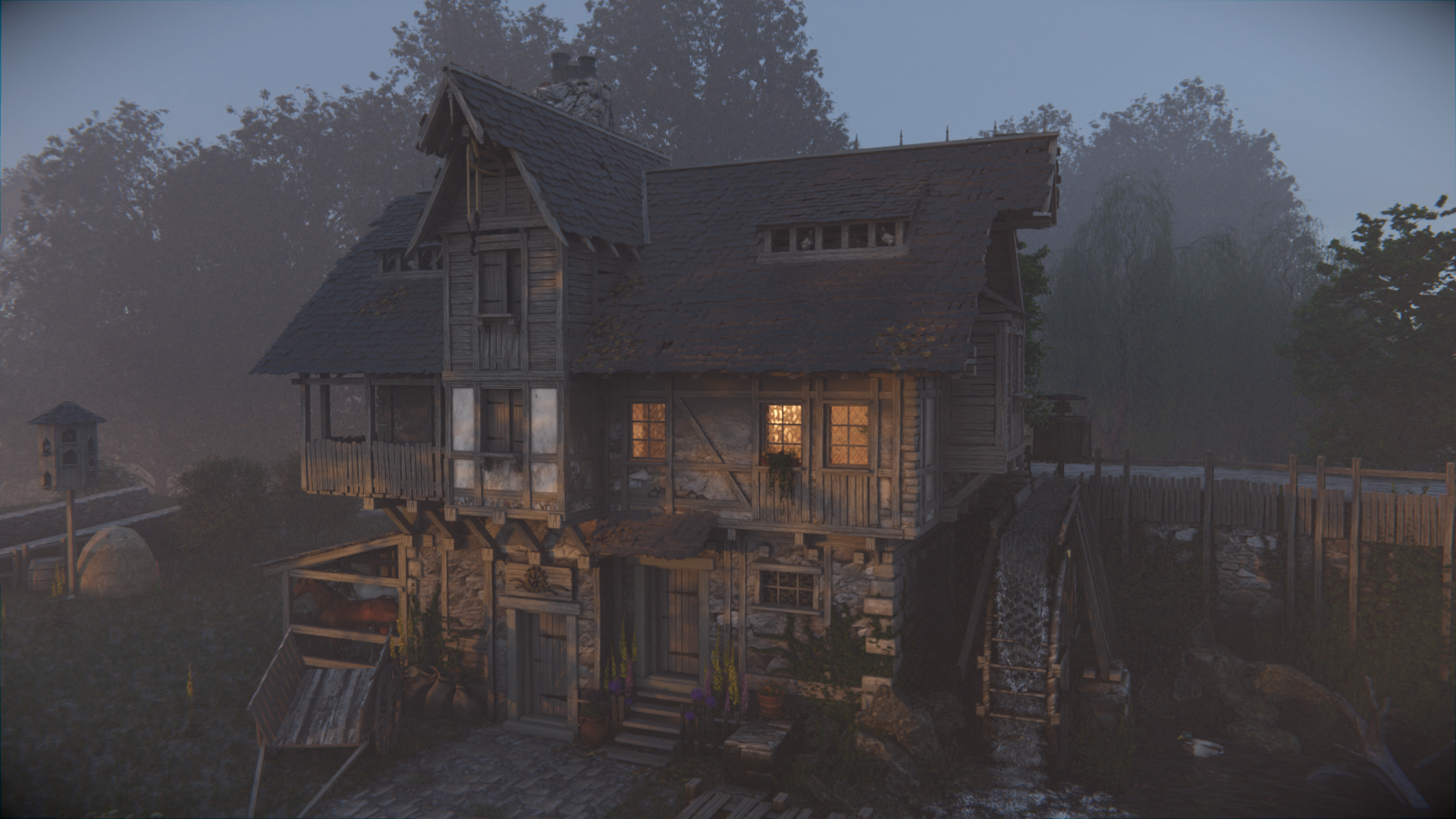 I used Blender Compositor for post-processing. In Render Layers, I used Denoise and Lens Distortion nodes to add photographic realism to the render. I adjusted some color and contrast adjustments in Gimp. 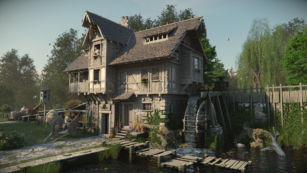 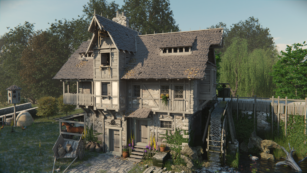 Thank you for this chance to share the process of my work. I appreciate it. 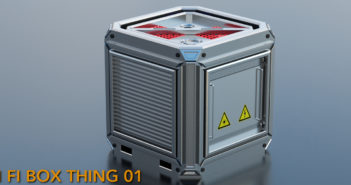