Hello! My name is Florian, I’m 35 years old and I live in Paris. I am currently working at Cube Creative, a studio that mainly produces 3D series for television, mostly cartoons. While the company has gone through the use of several software packages, for the past few years we have been using Blender to produce our series.

Like many people, the global pandemic left me with a lot of free time, which allowed me to get back to creating personal work. And while I was experimenting a lot with animal hair at work, I decided to recreate a character for fun.

I'm not really a character designer, so I looked in the works of 2D artists that I like, including Sam Nassour whose Instagram is full of inspirations and drawings that make you want to turn them into 3D. So I chose this cat captain, who was purrfect (got it?) for testing fur on a pretty awesome design. 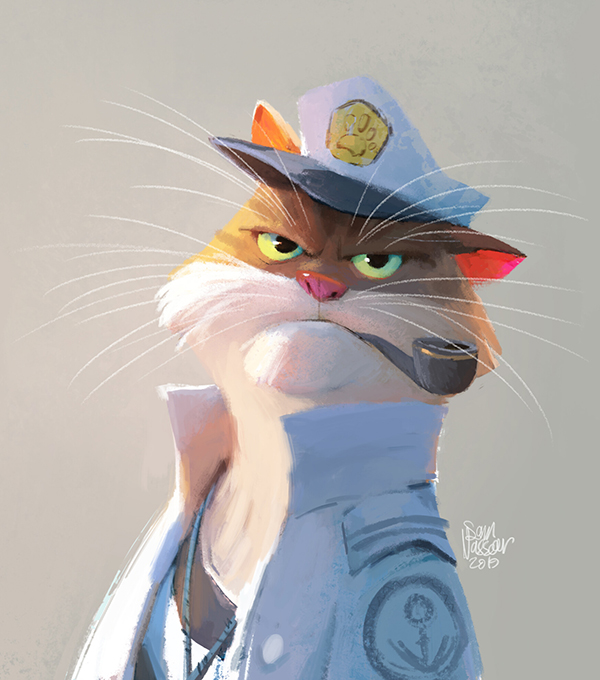 I started with a sculpt to get the shape of the character quickly, based on the illustration. The idea was to have the same pose and the same camera angle, without necessarily the same lighting. I used the basic sculpt tools in Blender which are very good for laying out the shapes. 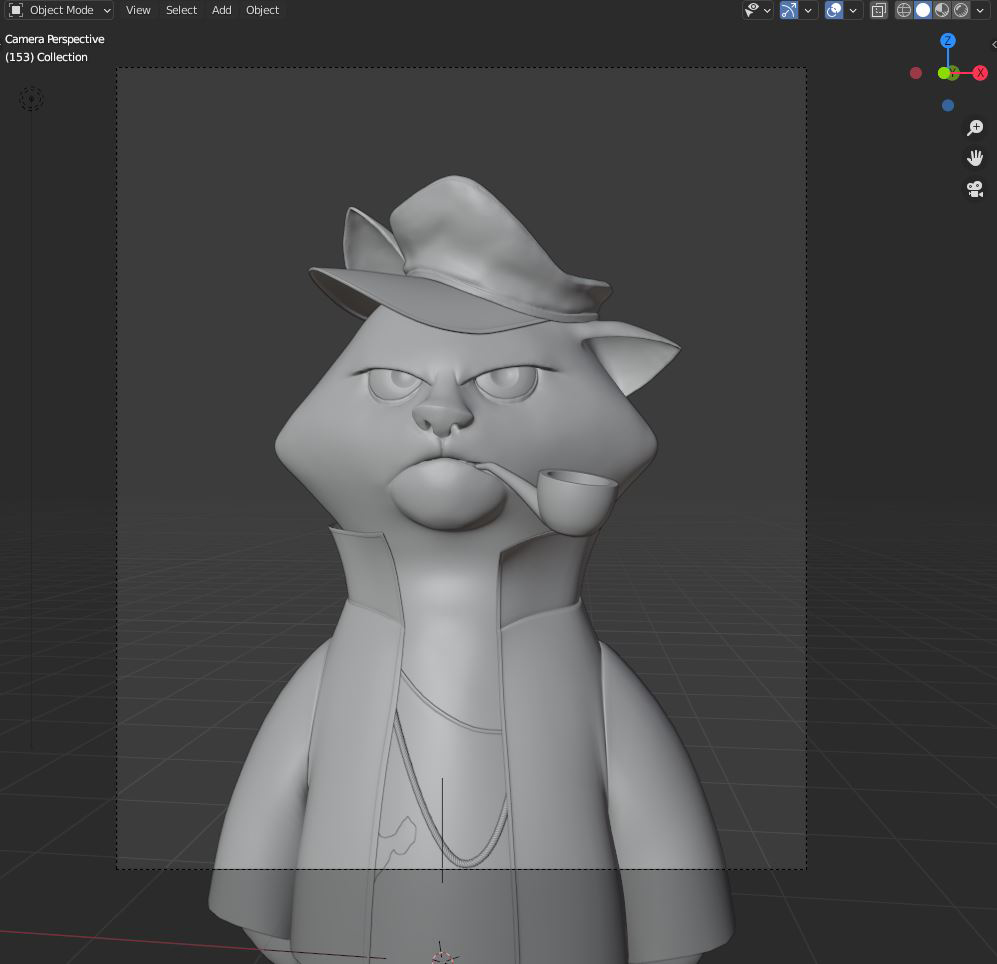 Then I did a retopology phase. A phase that is not necessarily mandatory if you are doing a fixed illustration like this one but I like to have something flexible for the UVs, generate the fur or simply not have to work on a scene with too heavy a mesh.

And it's always good to do a bit of polygonal modeling sometimes! No special technique except for the snap tools and other small native Blender extensions. 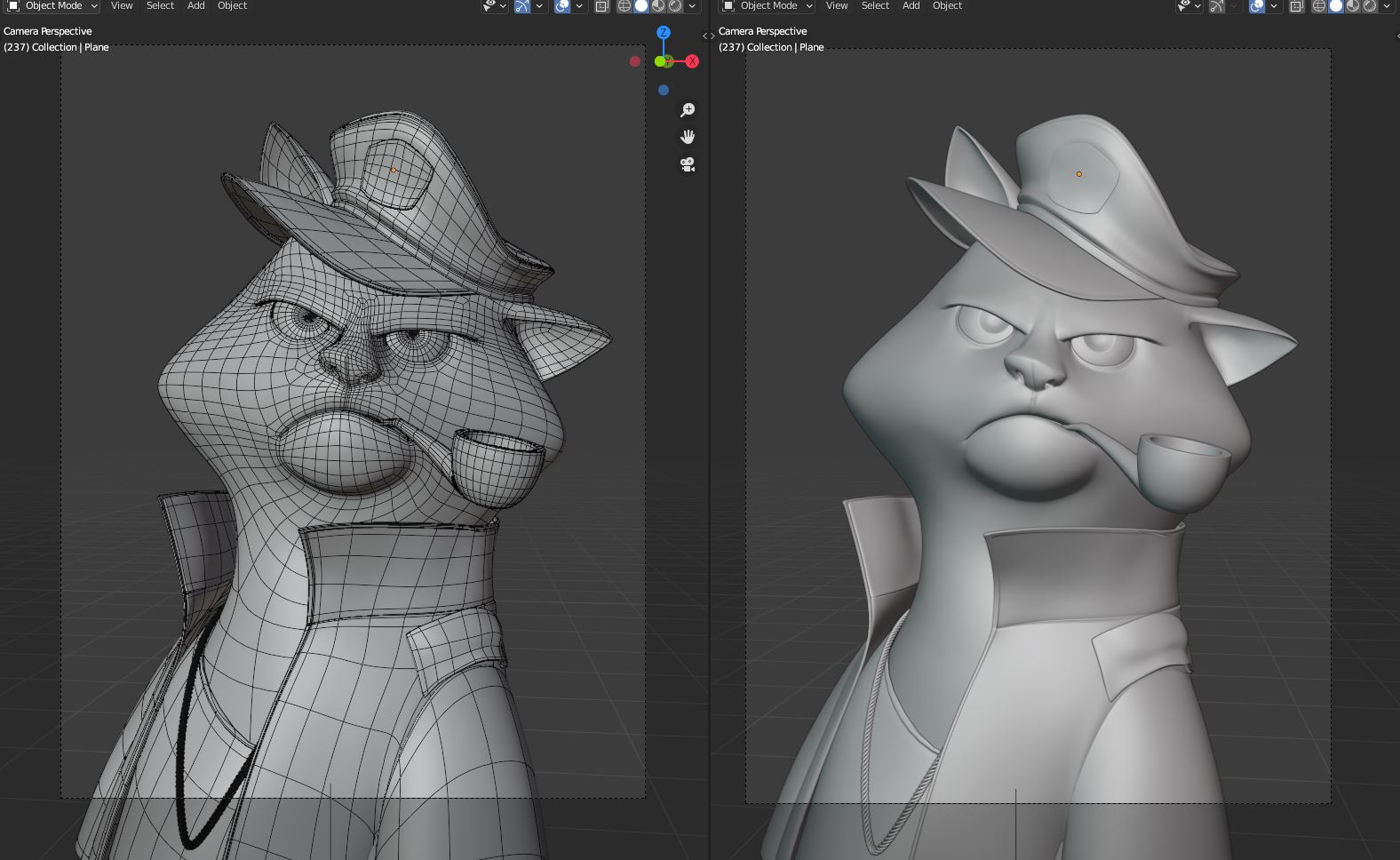 For texturing and shading, I switched to Substance Painter. UVs are always the most painful, so I use more and more automatic tools and the Substance tool generally works well. Here, I focused mainly on the clothes and accessories for the details, to have a slightly realistic material effect while remaining simple, a few light folds on the jacket. 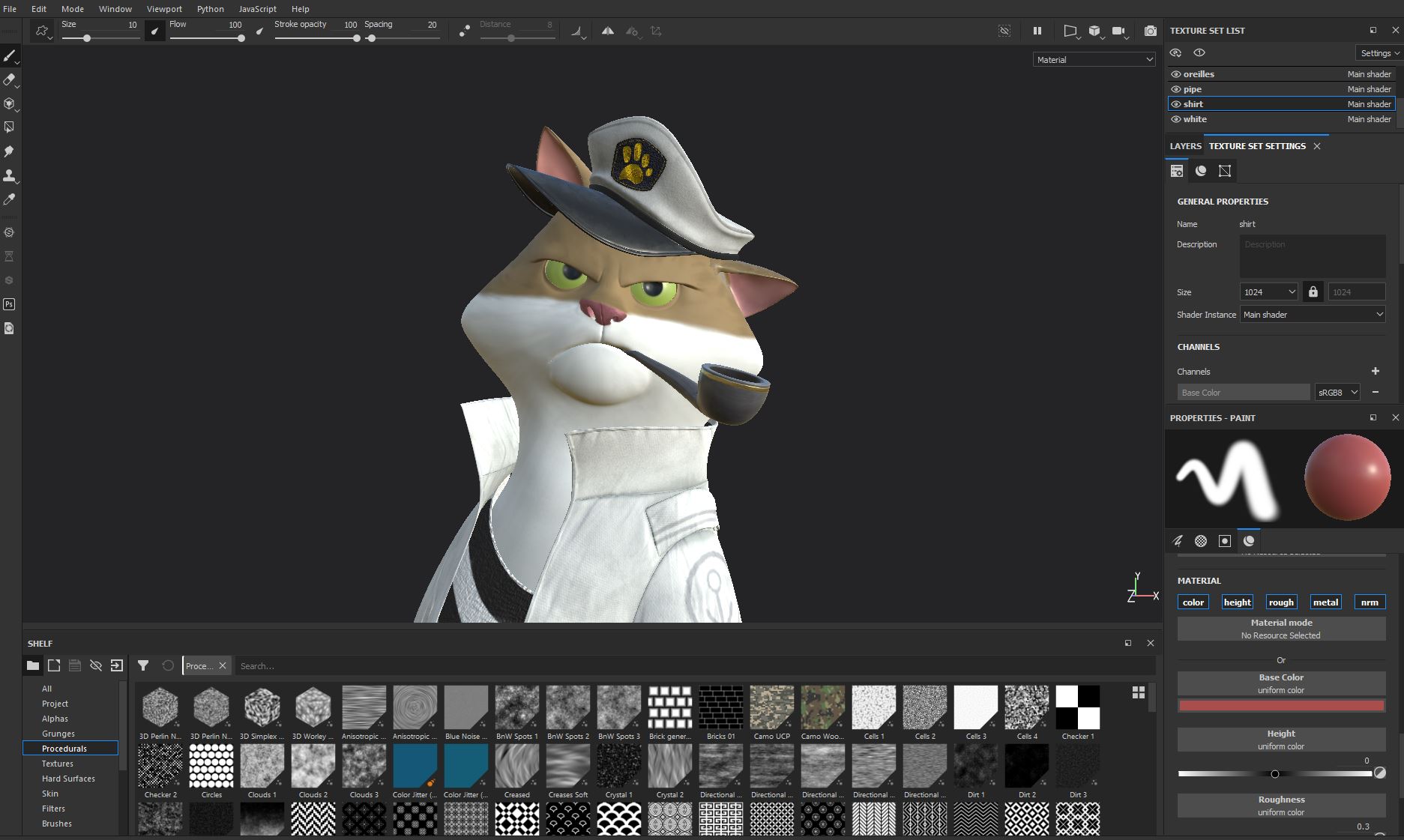 As for the body, since it would be almost entirely covered in hair, I concentrated on getting the color I wanted and that I would reuse as a base on the hair shader. I also detailed the nose and added a little color to the mouth.

The Blender shader is simple, with a basic principled BSDF, SSS, and some variant effects for the eyes and SSS to make the ears stand out with less hair.

The fur was the most complicated. The silhouette is very important so I worked well with the basic illustration while keeping the character's gruff side. Blender's hair is done through the particle system, and if it is very efficient for the hairstyle as well as its shader, which is really nice, there are still some missing options like managing the clump size, for example. 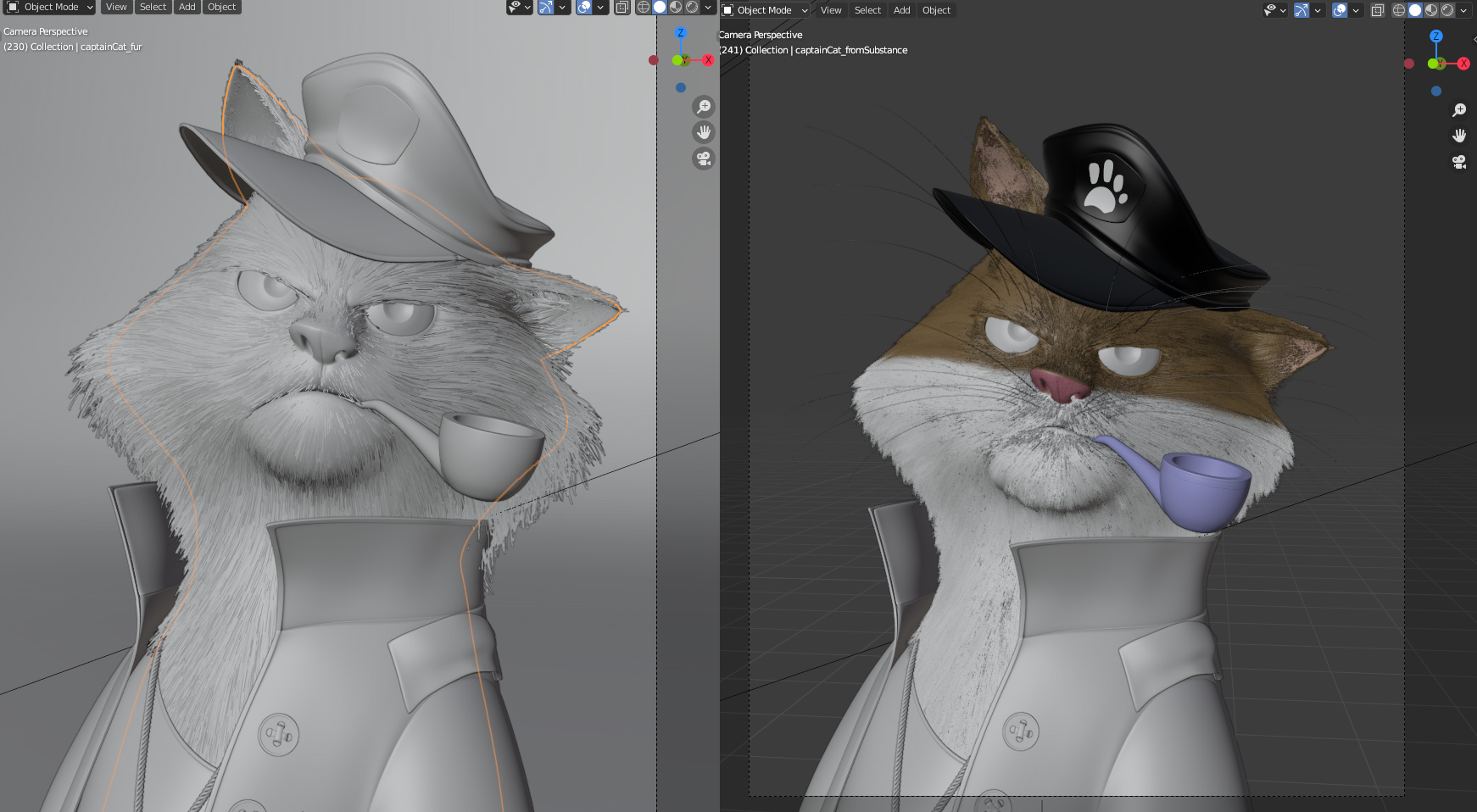 My bad reflexes of the old software made me use maps to control hair effects like density or clump. With other jobs I did later, I would have done better to use vertex groups to manage more efficiently, but that's how you learn.

I also had to add small hairs by hand because even the original generation of particles doesn't do everything, especially in the areas of small hairs like under the nose or at the mouth. The number of bases is always important, as the interpolated hair is more natural. 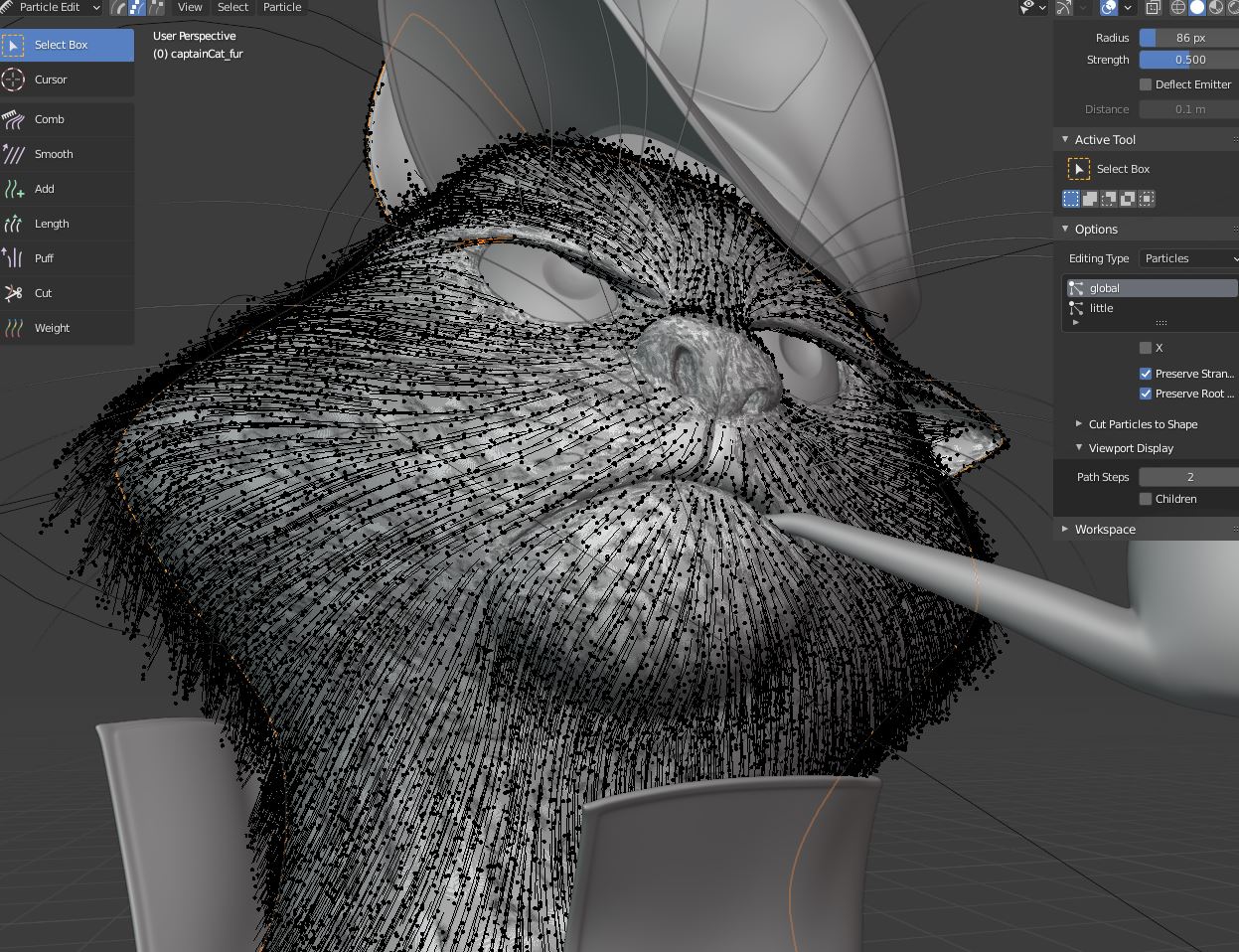 The whiskers are quite simple curves, no need to use a hair system. 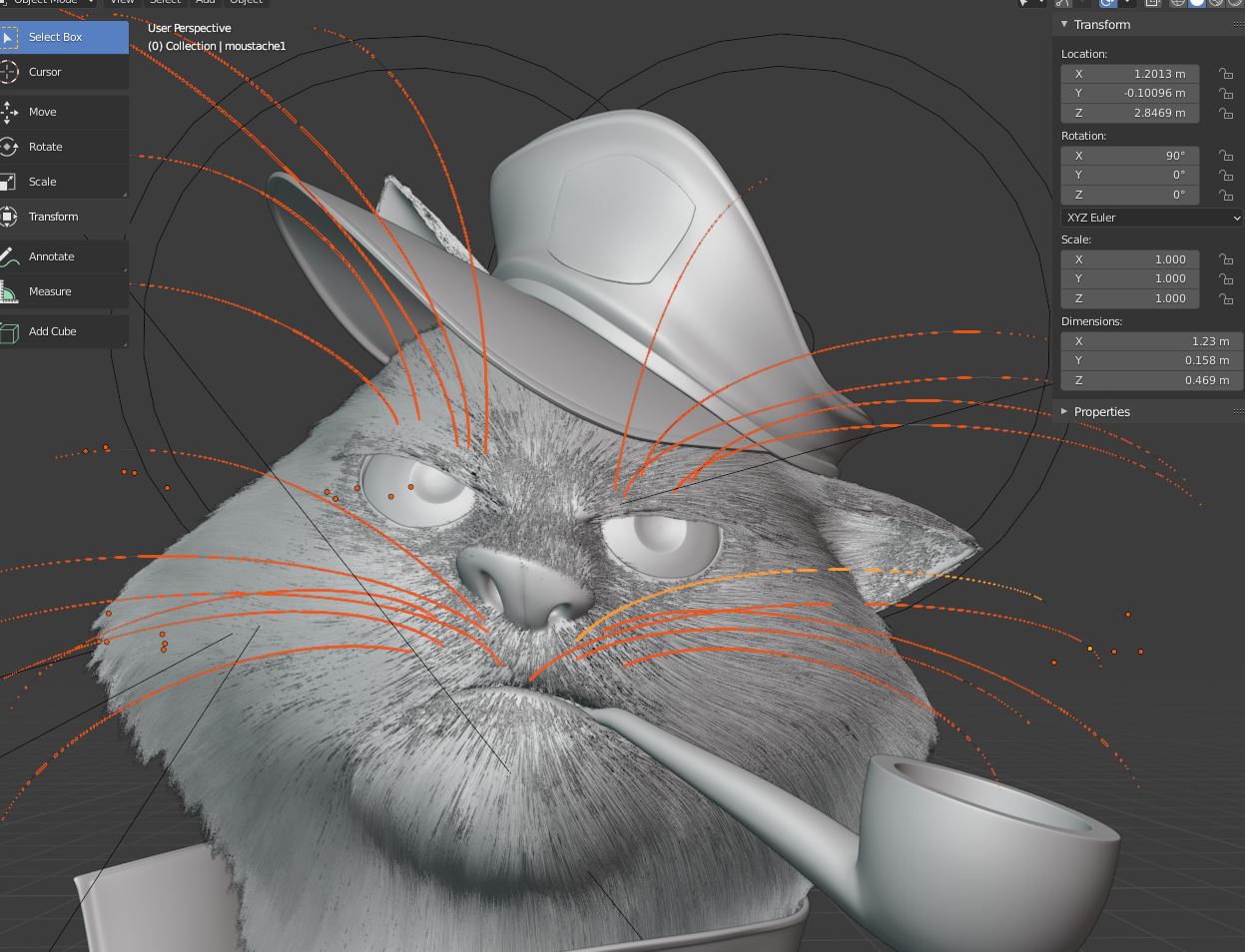 The direction of hair was a lot of work to find a good balance between cartoon and realistic hair. So we brush it like a real cat, but we mark certain areas like the eyebrows and keep that grumpy look so it doesn't disappear when it's the character's expression. 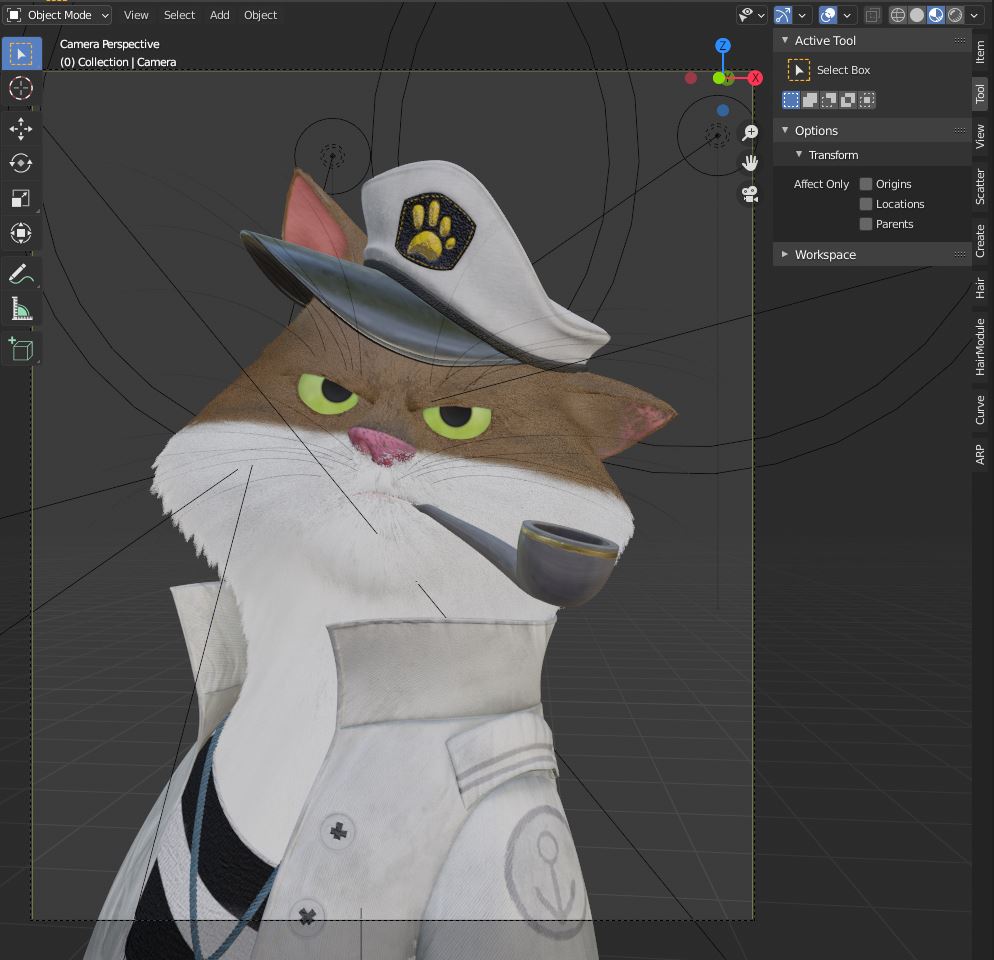 For the lighting, I wanted something simple, to focus on the character. So I chose a three-point studio light, including a backlight for the hair and a little bit of the ear, all on a fairly neutral background and a classic HDRI to catch a little reflection in the eyes. 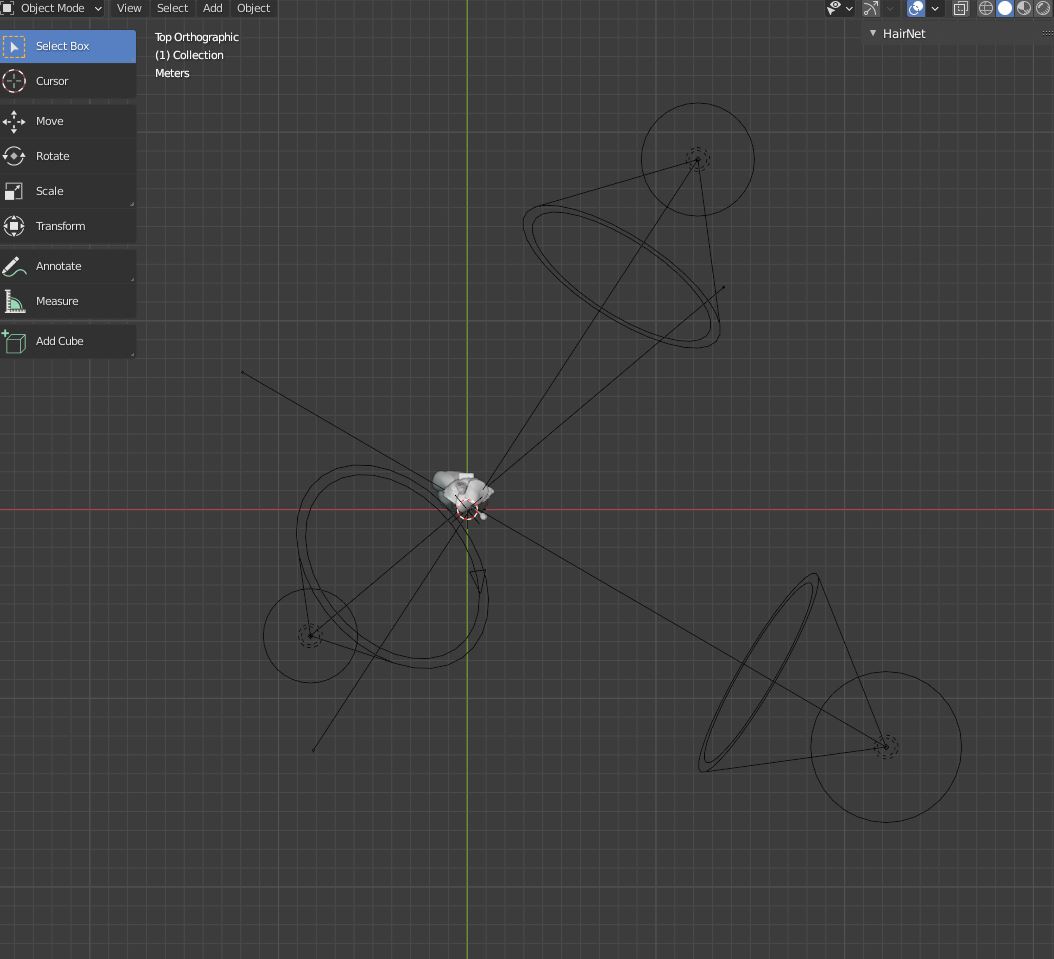 The Blender preview is essential to set up the lighting correctly. Eevee has real good points but not enough to render hair and some shader effects correctly. 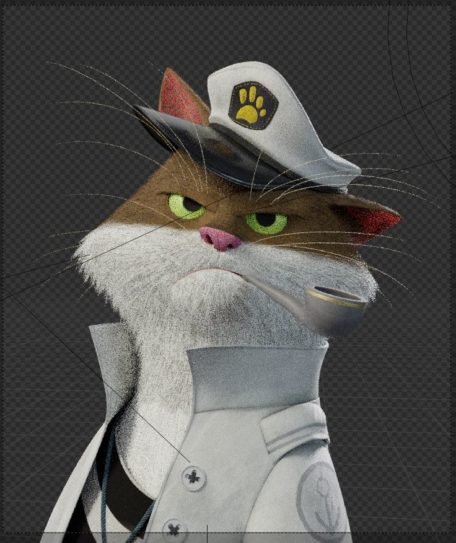 For compositing, I usually render over several passes in a single EXR, with some masks to adjust the elements I want, then import everything into Photoshop. I usually separate the cyclo but for this portrait it was done directly in Photoshop as the character has no impact on the background. 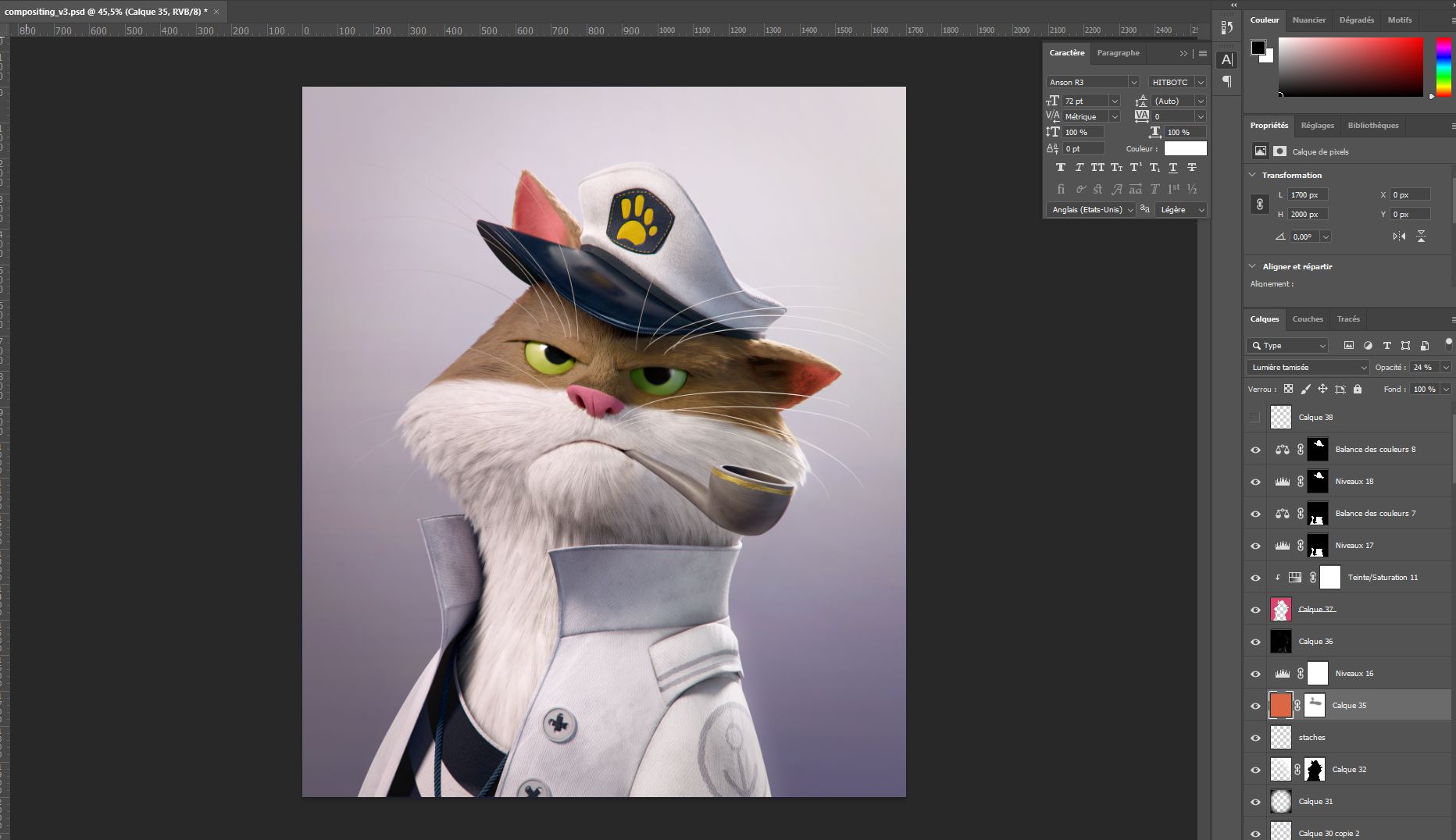 For the rest, it's quite simple retouching: colorimetry to get colors that I like, adjusting some fur passes, and adding some post-production effects like a slight chromatic aberration.

All this to get the final result! 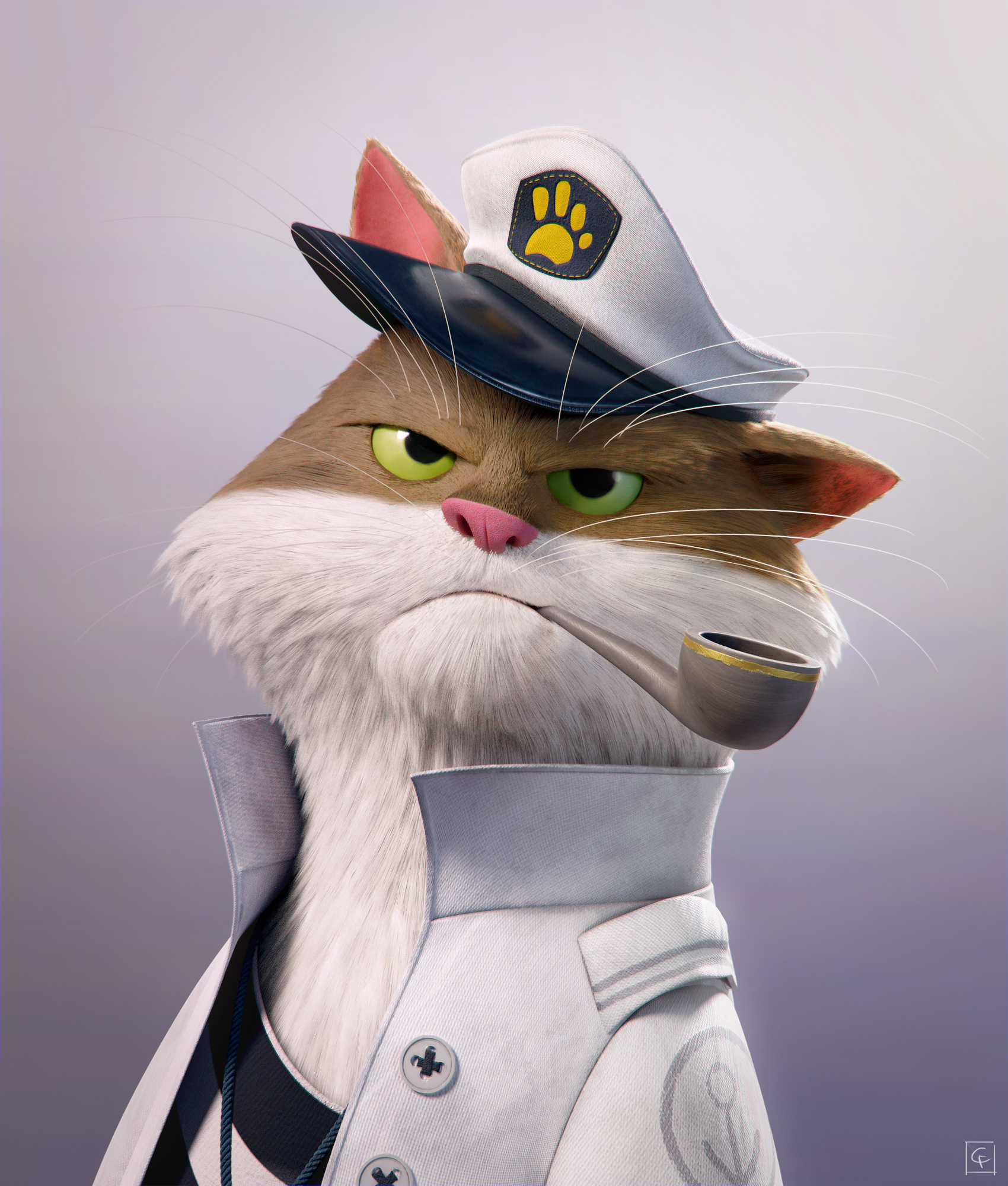 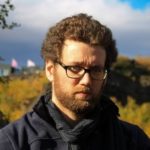 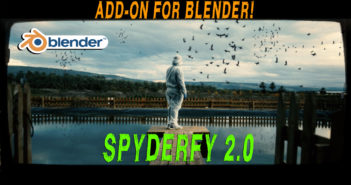 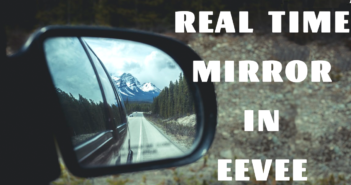