Hello, My name is Md Utsho, I’m from Sylhet, Bangladesh.

I’m 21 years old and a self-taught 3D character artist. I've been doing 3D for about 2.6 years now, ever since I was introduced to it. My passion for 3D—especially for characters—came from video games. I have played a lot of video games since I was a kid.

But I wasn’t fully motivated to start 3D on my own, so a friend of mine named Riyad helped me a lot and introduced me to the 3D world. I started with hard surface modeling, and now I'm fully focused on sculpting and character modeling. Most of my knowledge came from the internet; Youtube tutorials helped me a lot, and later, for character likenesses, I watched Frank Tzeng’s likeness tutorial from Gumroad.

My inspiration for this Nathan Drake character came from the game Uncharted, of course. I had wanted to make this character myself for a long time.

But my main inspiration for writing this article came from others' articles. This kind of article has helped me a lot before, so I hope my article will also help someone else. :)

I started my 3D modeling with Blender, so Blender is my main tool for most of the stuff, except for the sculpting that I did in ZBrush, texturing in Substance Painter, and cloth modeling in Marvelous Designer. I used Blender Cycles for rendering, of course, and Photoshop for the final touches.

Instead of sculpting from scratch every time, I made a base mesh for male and female characters myself and I use them every time to make any character I want.

Here’s the likeness sculpt and details that I did in ZBrush. 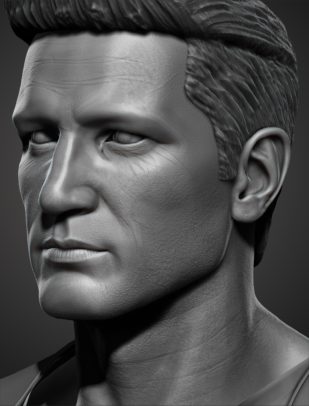 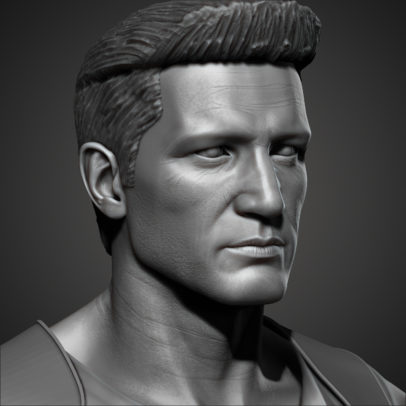 I did cloth simulation in Marvelous Designer. Nothing special, just simple cloth patterns and shapes with details added later in ZBrush. 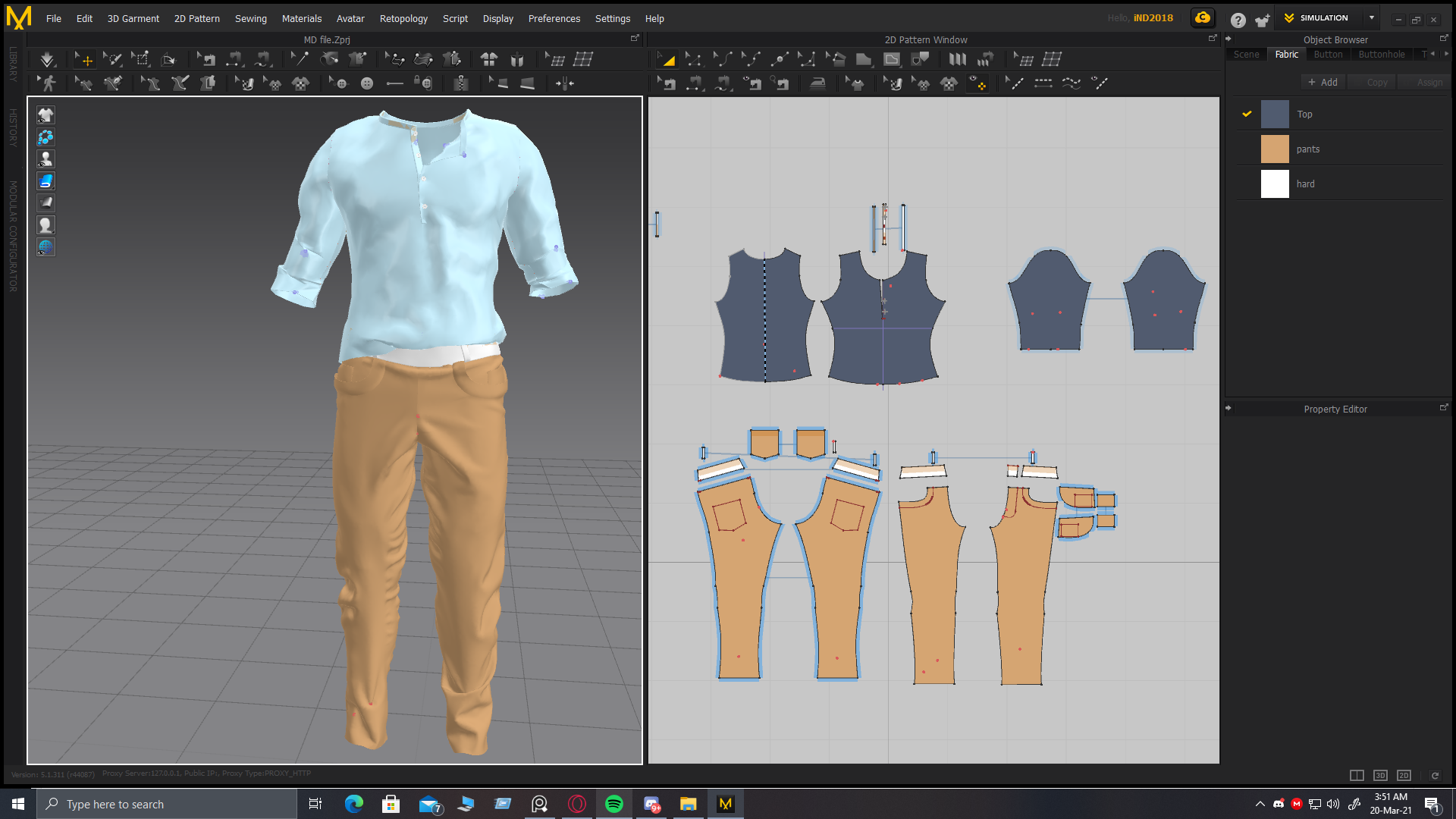 For the face, I started by doing spotlight texture projection for the skin color texture in ZBrush as a base color texture to save time. Later, I imported the model into Substance Painter for fixes.

I used a red, blue, yellow, and grey color palette to texture the skin. And for random moles and other details, I added brown and other colors, depending on what I needed.

Oh, and yes, I baked Normal & Cavity maps for the skin in ZBrush. I baked the clothes in Substance Painter. 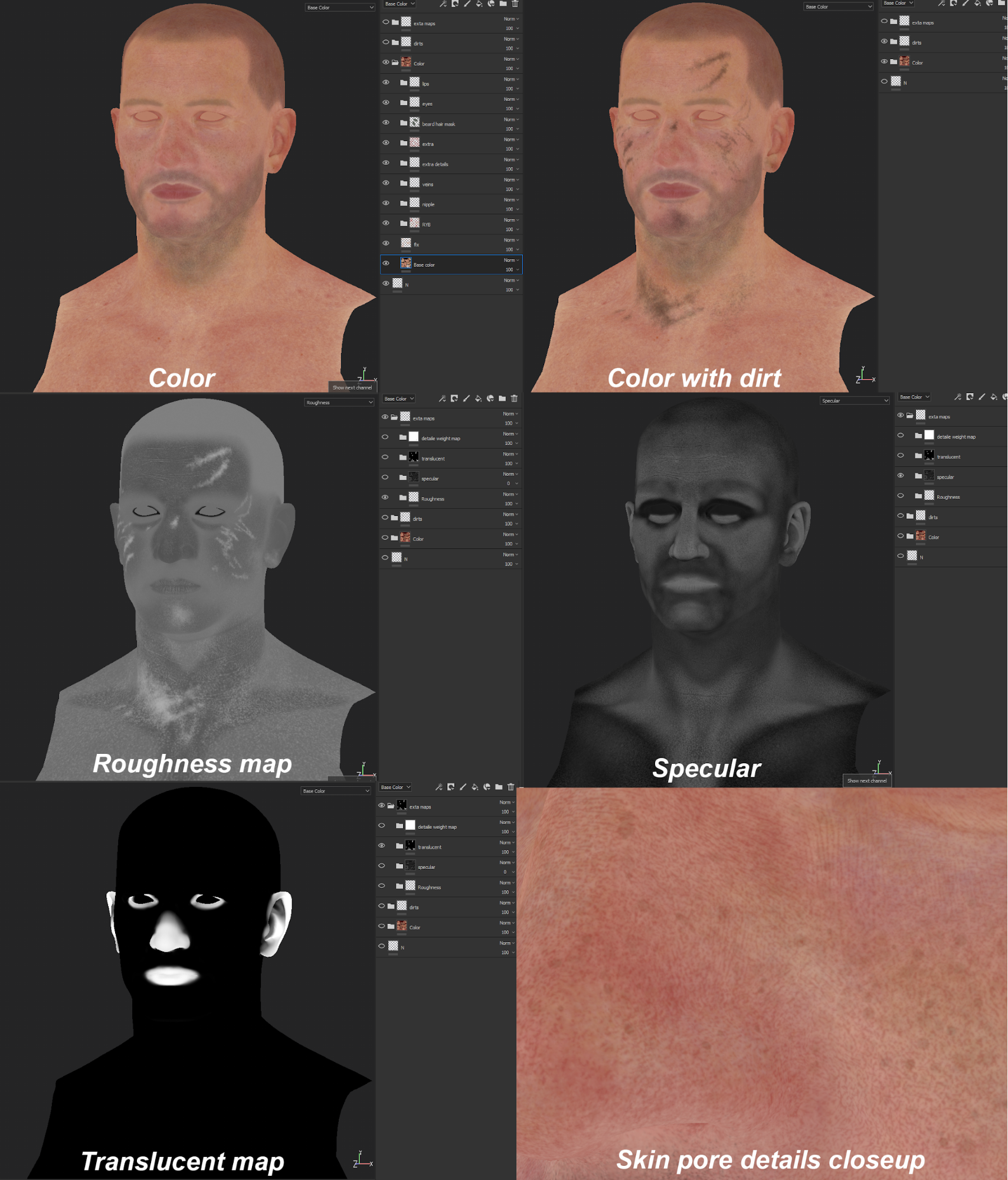 Here you can see all those maps I used.

The translucent map is not necessary but it’s good to have it; lights will scatter more in those white-masked areas. And for those pore details, you need a cavity map. I baked the cavity map in ZBrush—in the masking tab just press “Mask as cavity” and you can adjust the masking profile. Then I baked that mask into textures.

Later I used the cavity map to multiply on top of skin color, roughness, and specular maps to get those extra details.

This is how a cavity map should look (the cavity map contains those pore details that I had made by sculpting). 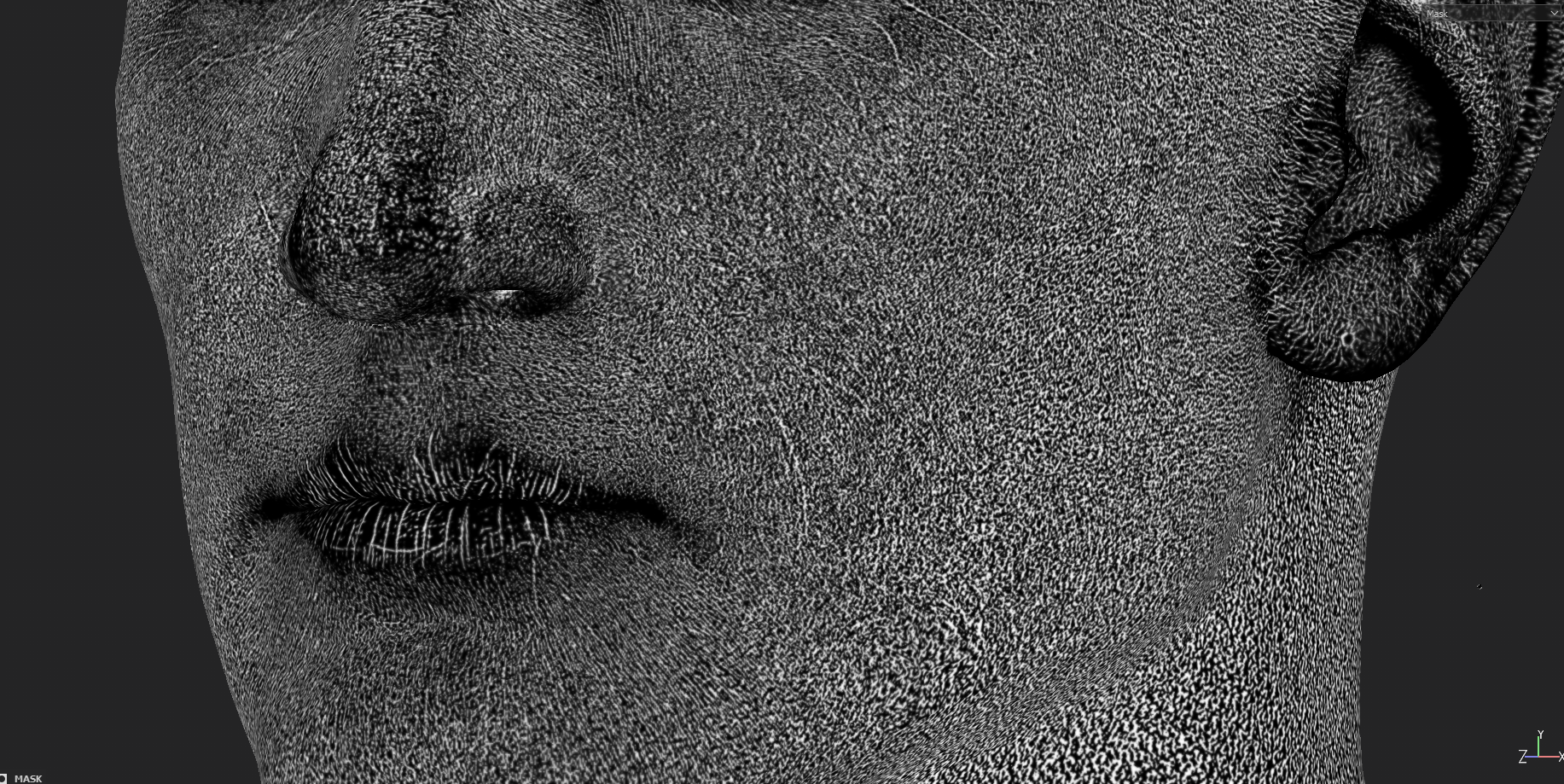 Here’s an example of what the cavity map is doing—I just reduce the opacity to get that slight effect. If too much opacity is used, the character will look sick.

And to get that dark beard, bald head type of look, I used a Paint Spray brush in Substance Painter. 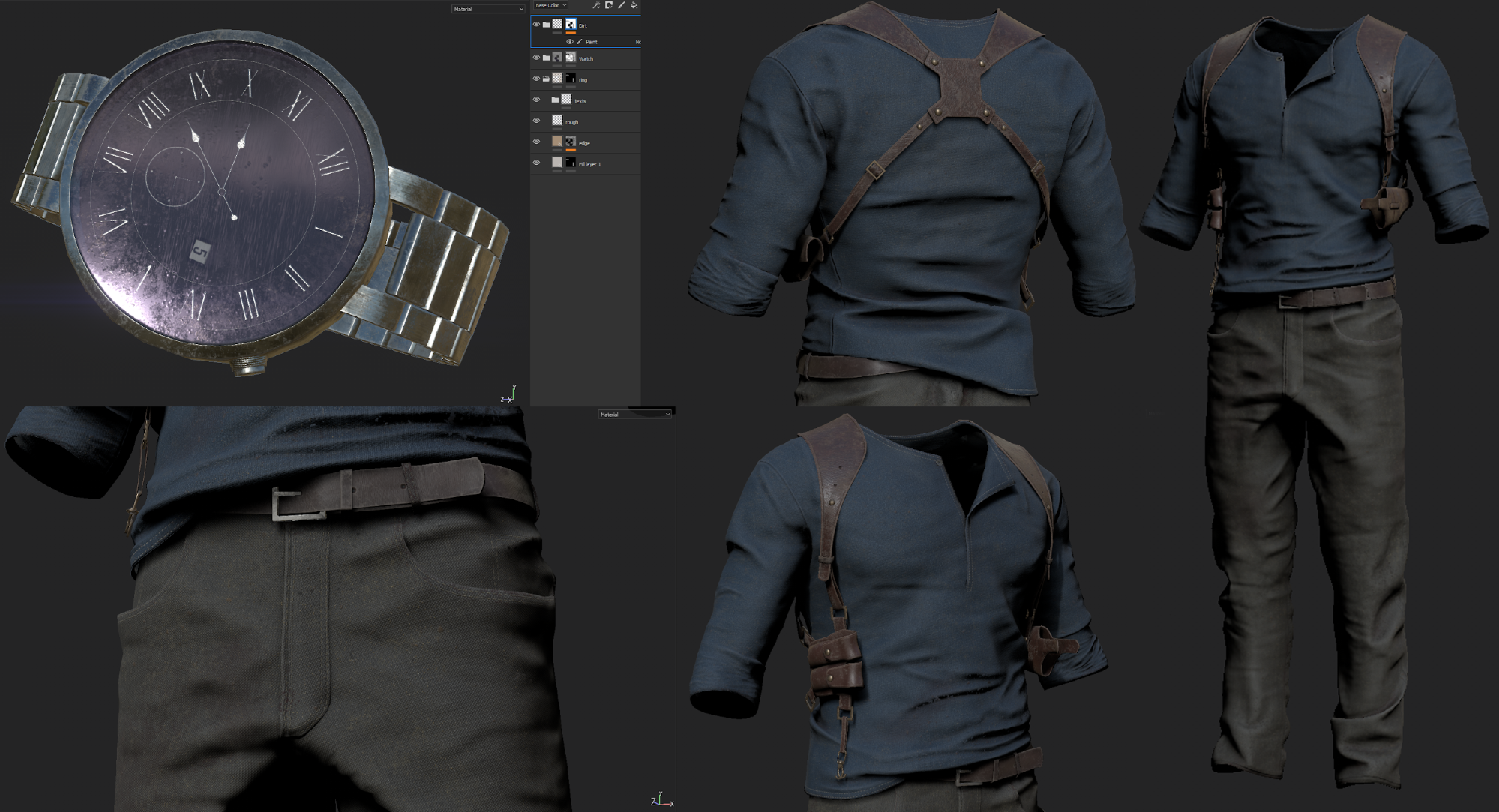 The cloth texturing was simple. I just used those already-made materials from Substance Painter and manually painted details on them.

For the wristwatch, those handles and numbers are height maps, not actual mesh.

I’m not very good at shading myself, so I looked for help online and found a free skin Shader that works really well. Then I changed SSS Cubic to Random walk. Random walk looks more realistic but also increases noise and render times. 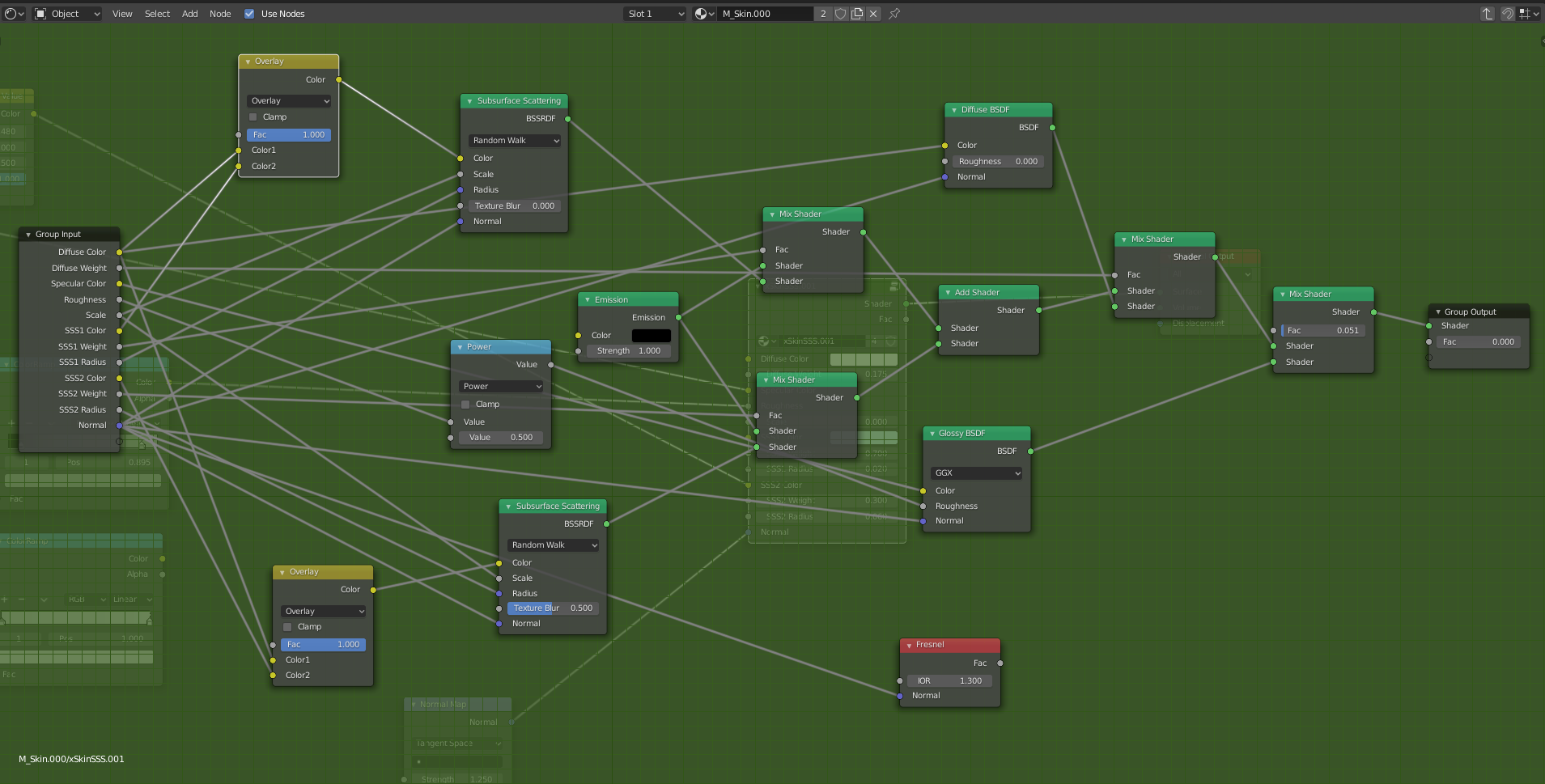 For clothes, I just used a simple principled shader.

To get a scatter map from the color map, I used Hue Saturation Value to adjust the color. 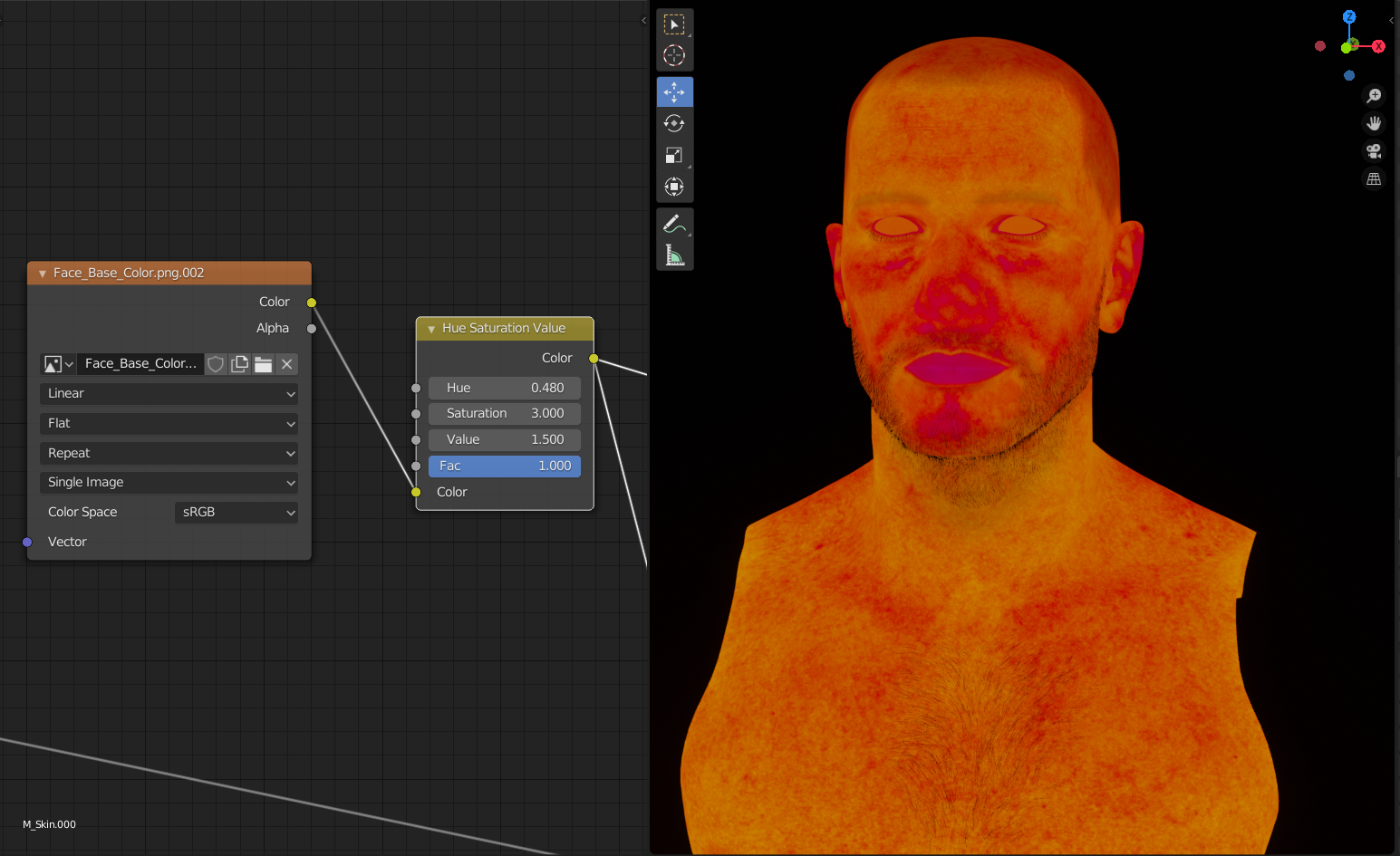 And for eyes, I always use César Salcedo’s realistic eye from this tutorial.

Making/modeling hair is always boring for me...but it’s also essential for characters. In this project, I used Blender’s particle system. 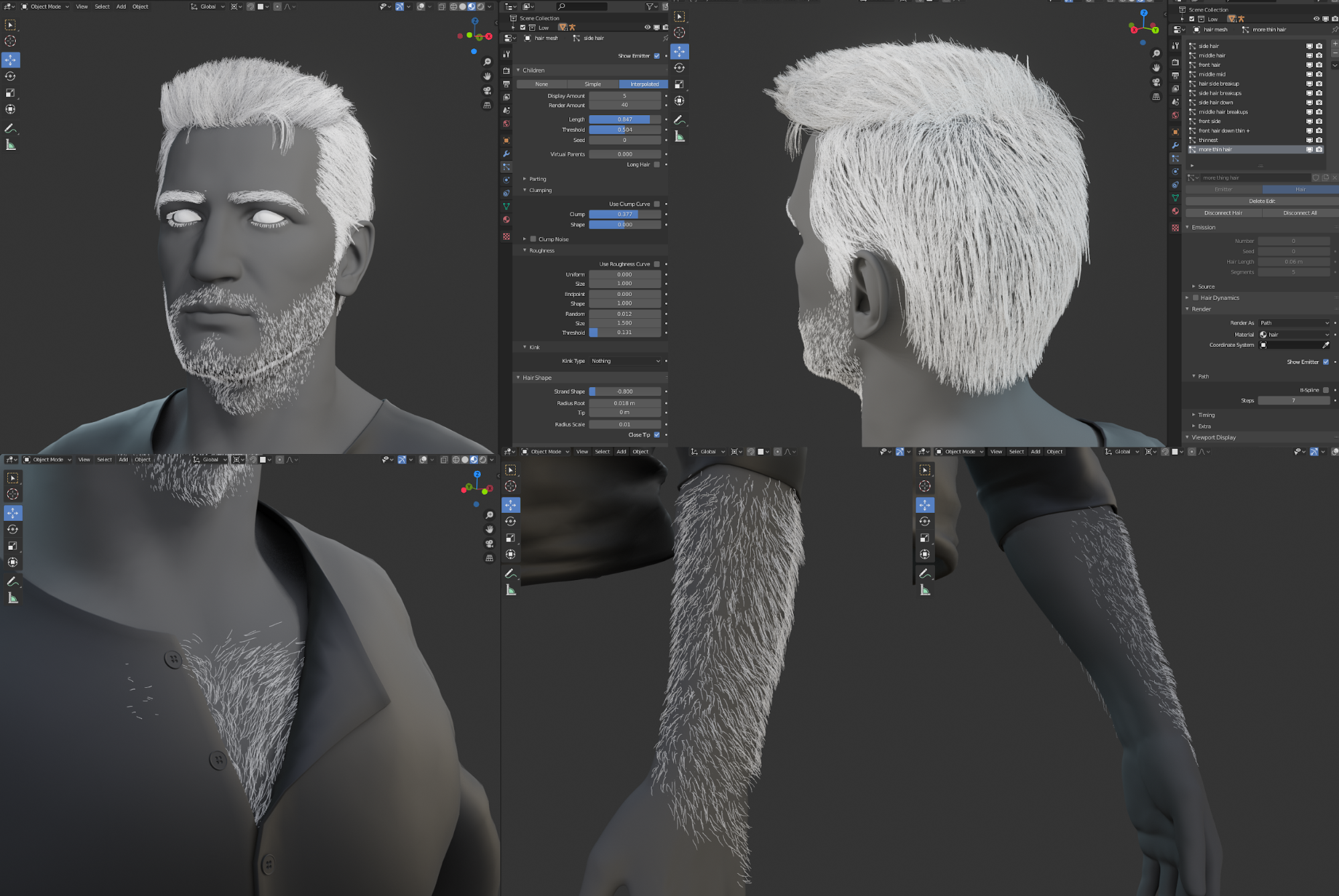 For hair on the head, face, and chest, I used a principled hair shader.

For the children hair particles, I used both Simple & Interpolated depending on the kind of result I wanted. As an example, I used Interpolated for the base shape of the hair and tried to cover most of the head with it. And later on, for breakup shapes and flyaway hairs, I used Simple. 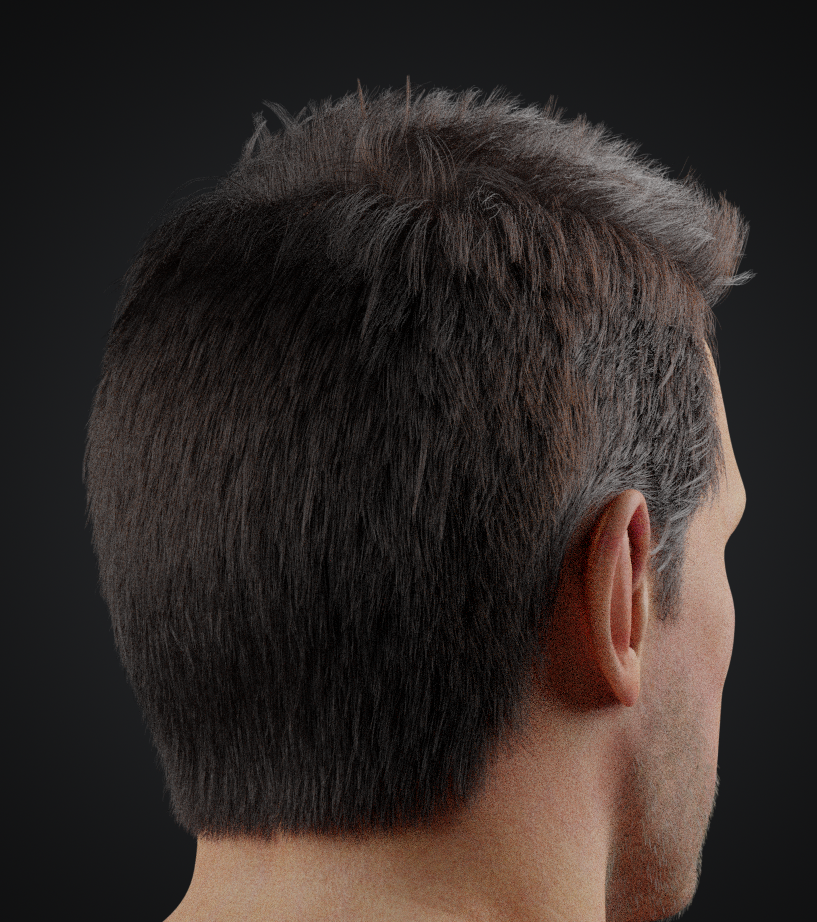 This is from an early test render. The hairline isn’t perfect here—I fixed it later on.

And this is the final one.

When it comes to rendering, sometimes I get confused and don’t know what kind of lighting I should do. Most of the time I try rim lighting and it looks great.

I rendered these images in 2k resolution and 1000-1200 samples (denoiser off). Later I used gigapixel to bring up some details and increase the resolution to 4k.

Here you can see how I did my lighting for the first rendered image that I use for the Thumbnail on my ArtStation.

I always hide other objects that aren’t going to be visible, which allows me to speed up my render time and also use less memory.

I did the final post-processing in Photoshop.

I always render my characters with transparency turned on, so that later I can add a background in Photoshop. I added a bit of color correction and some random variations like clouds and noise and multiplied them on top of my image and adjusted opacity to my liking. 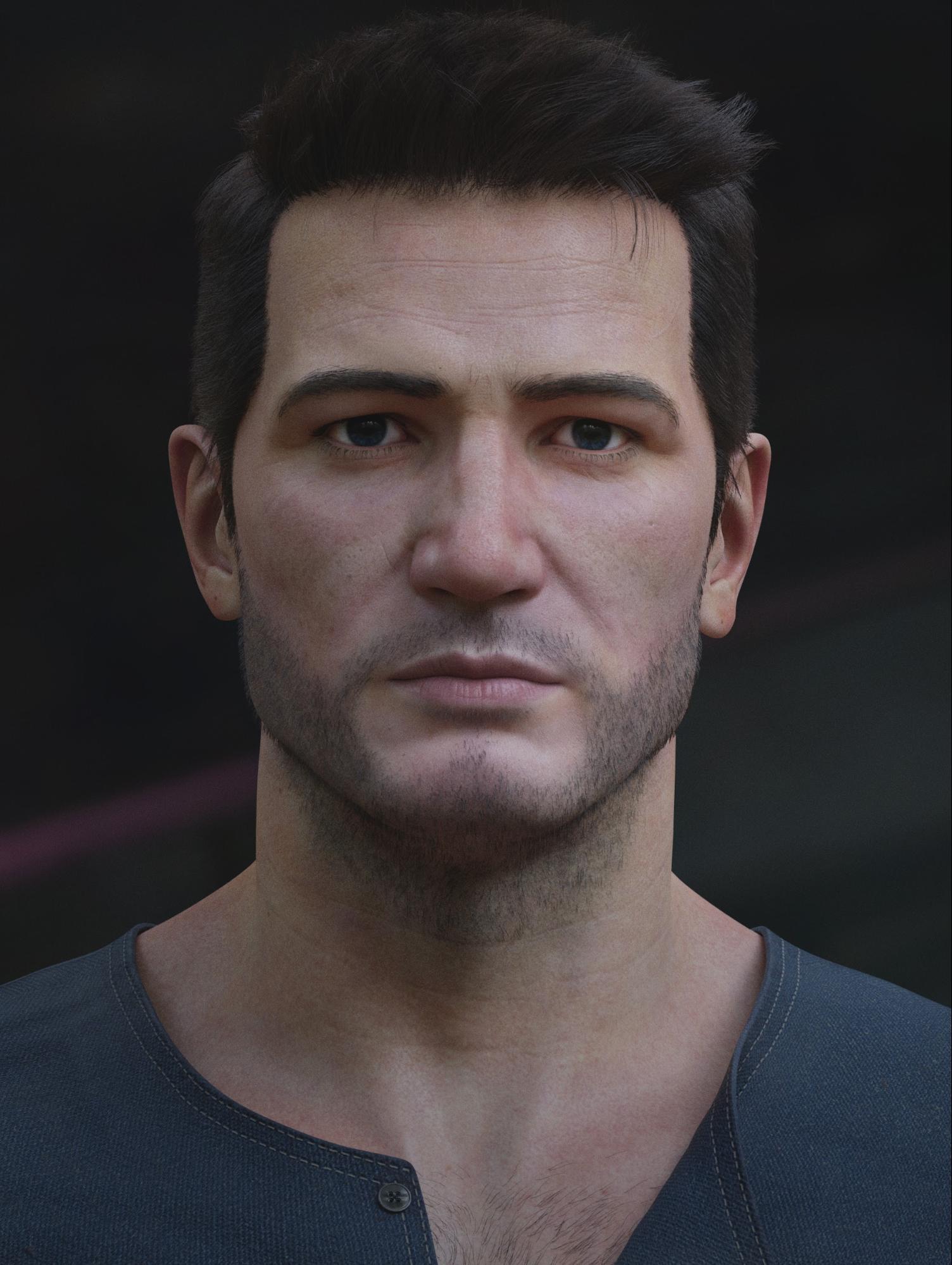 I got this result from just the HDRI image. I didn’t use any physical light for this one.

I did so many renders for this character, but this is my favorite and final render. 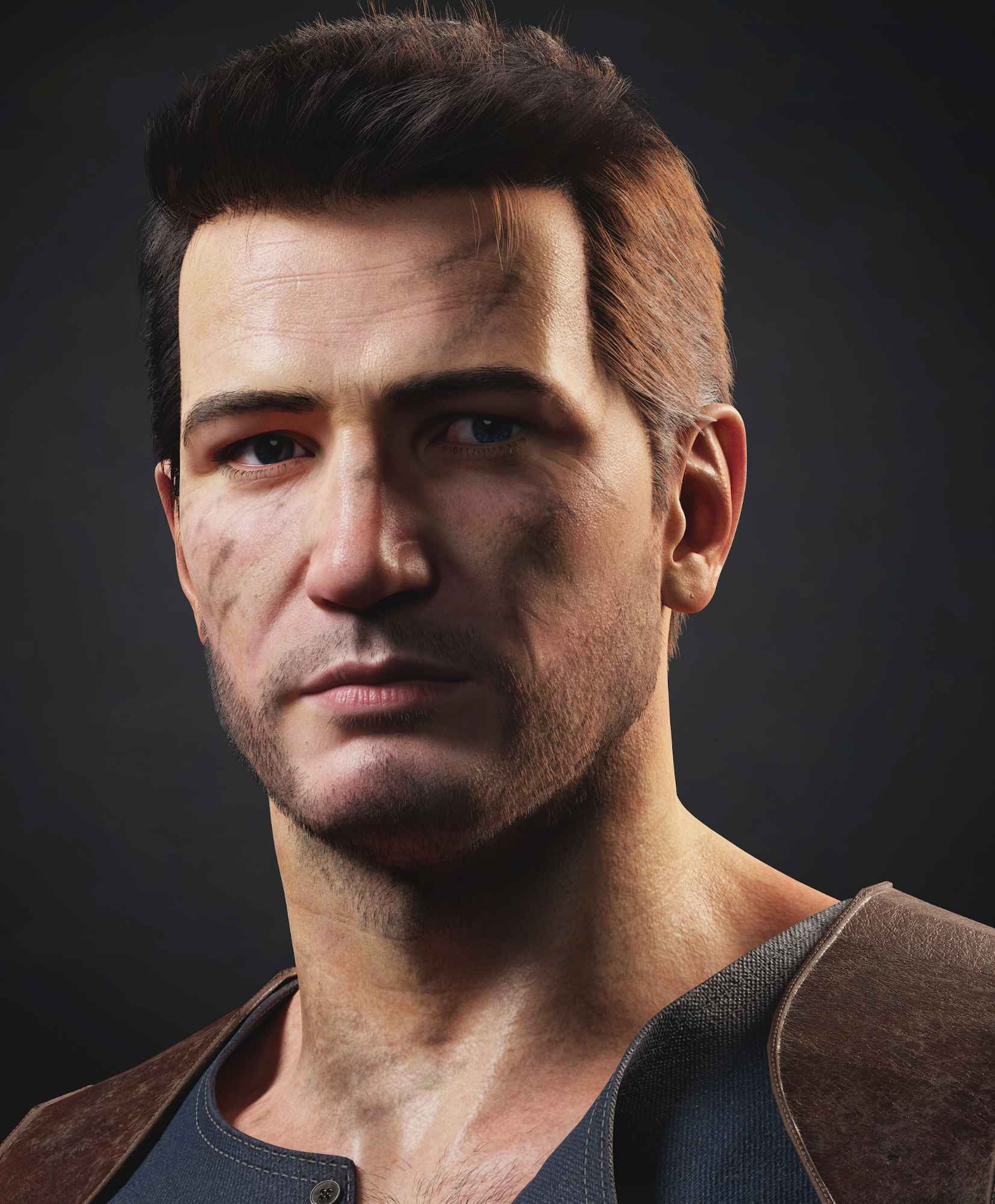 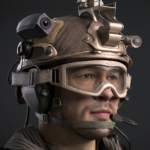 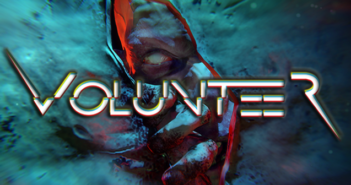 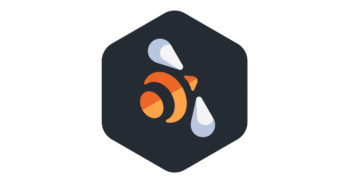