I am pleased to present the trailer for my series "Njaa" (the hunger). The working title was 'Eve: the will to live'. If you have 1 minute and 20 seconds go check it out.

I've been working on this for almost 6 years, and instead of sitting on all the footage until the film was done, I decided to get it out there as a series.

It is set in East Africa, but without naming any places. I did live in Tanzania for almost ten years so it's not a random choice.

(I've got 35 languages in the subtitles; time-permitting, I'll do breakdowns/tutorials and also give away some of the assets that I made.)

Thanks community, and thanks Blender Nation.

Content warning: gore/violence (it's a zombie movie, what did you expect? ;-)

I am a writer and filmmaker. I got into Blender in 2014 to learn Motion Tracking, and as I got familiar, my curiosity led me deeper into the wormhole. Now I'm up to my ears in my feature animation "EvE: The Will to Live". I am completely berserk for blender and animation and film. OpenSource is important because SHARING = PEACE 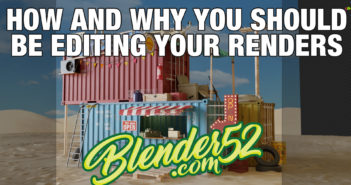 Previous ArticleHow and Why you should be editing your Renders