My name is Kürşad. I have been a CG artist for over 22 years. I worked in games, movies, documentaries, medical CGI projects, etc. as a 3D artist/sculptor/animator/generalist. Nowadays, I am working on synthetic imagery for machine learning and machine vision purposes, and developing add-ons and side tools for Blender at Zumolabs.

I started learning Blender in 2005. It was not really up-to-par with any of the 3D apps I was using at that time. I was mainly using it as a modeling tool back then. Around 2012 I began writing add-ons for Blender.

My favorite Blender features are (the list is as long as all the features in Blender, actually):

My original goal with this piece was to create a non-realistic illustrative work. So I came up with a couple additional goals.

This piece is more about the larger composition and less about the individual pieces. There are a lot of elements in the piece, so I won’t focus on every individual detail. 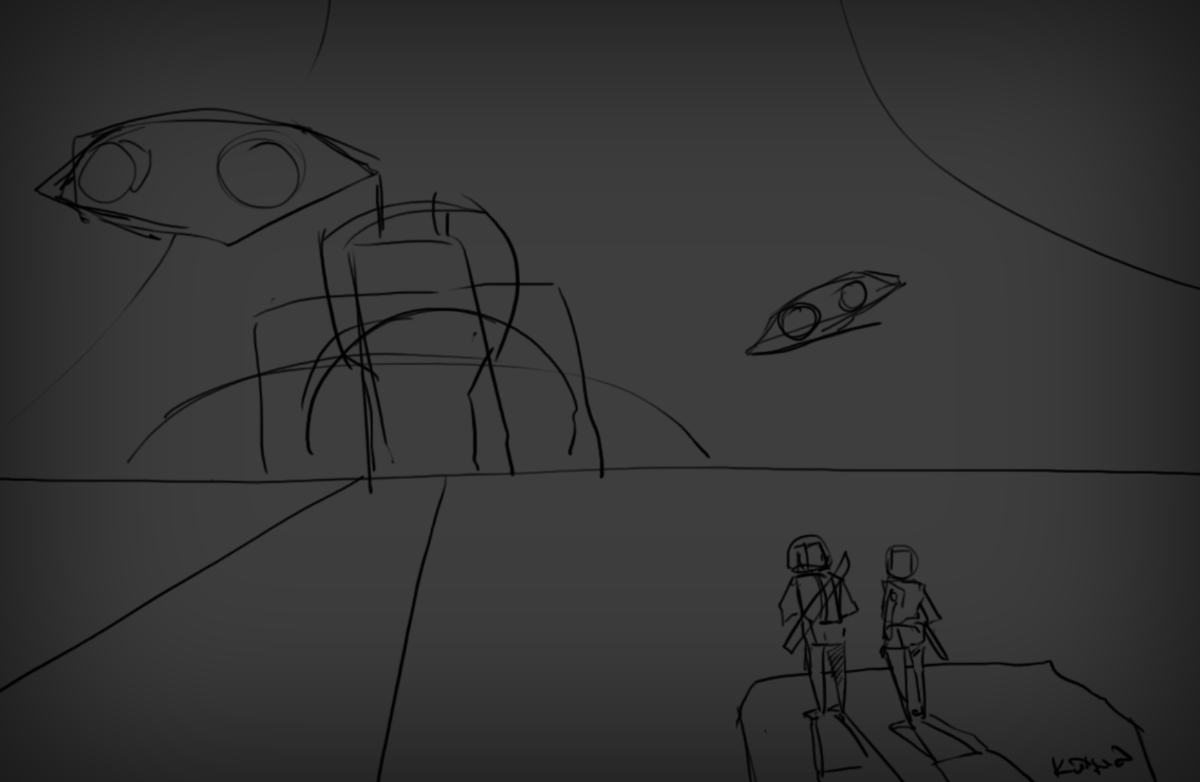 I initially started playing around with this piece with a very simple sketch. I did not collect any references, and I did not rely upon any other inspiration, because I wanted it to have a unique vibe to it. Once I decided on where to put the large and the small shapes across the composition, I started creating the initial layout.

The humanoid rebel warriors are some of the main points of interest in the picture; therefore, I placed them closest to the viewer. Since they are, by nature, the smallest items in the actual composition, placing them right at the bottom as a group gave them a relative importance.

I chose rough geometric shapes for their general appearance. First, I created the master warrior model with the overall style I was looking for. Then I used sculpting tools and the edit mode to re-pose the rest from the master model. I decided not to use any rigging tools to keep them freeform. Keeping the shapes as loose as possible helped with the illustration style.

I added slight variations using the displacement modifier. I also used the same approach for their weapons. Additionally, I utilized the mirror modifier to create a bunch of weapons variations. In the end, I went with the three weapons you see in the image above.

I first worked on the general placement of the main structures. To emphasize the idea of a well-defended base for the kingdom’s headquarters, I went with crescent-shaped mountains that surround the main palace. Both the landscape and the mountains had to be rough geometric shapes to go well with the shading style I was looking for. I made very rough shapes using low-resolution planes, and, with the help of the displacement, the smooth, and the decimate modifiers, I was able to add extra artificial details on top. 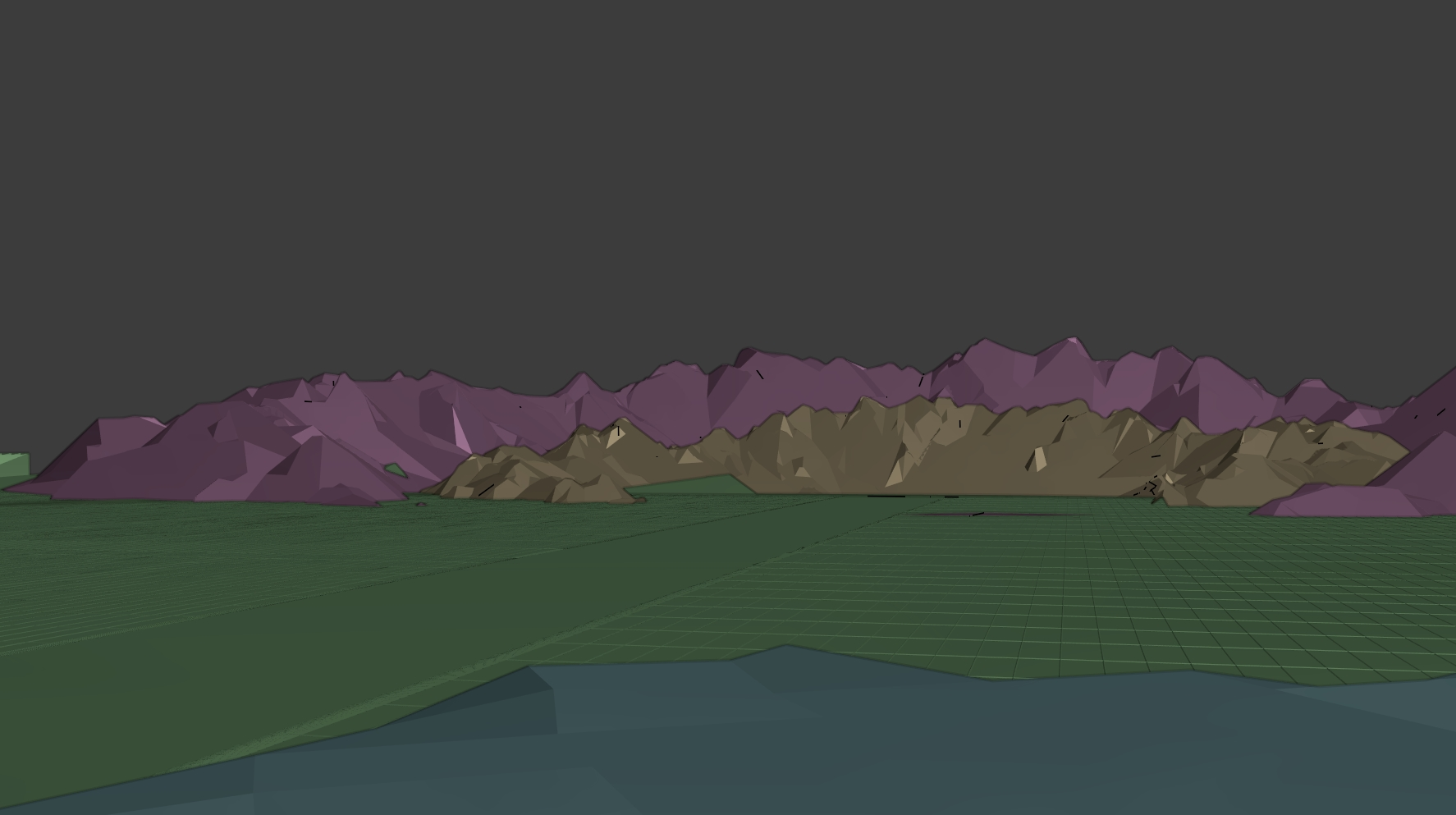 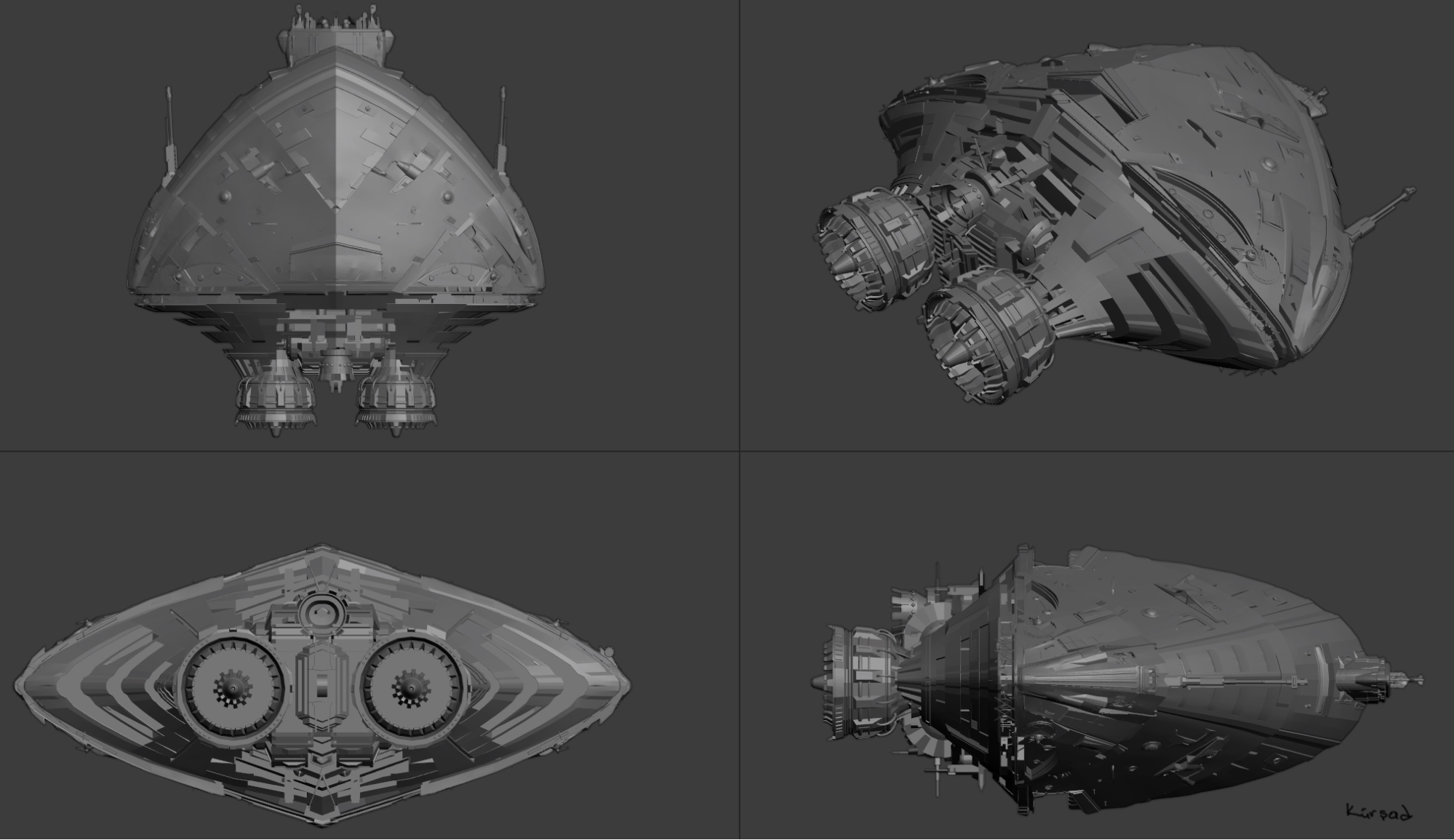 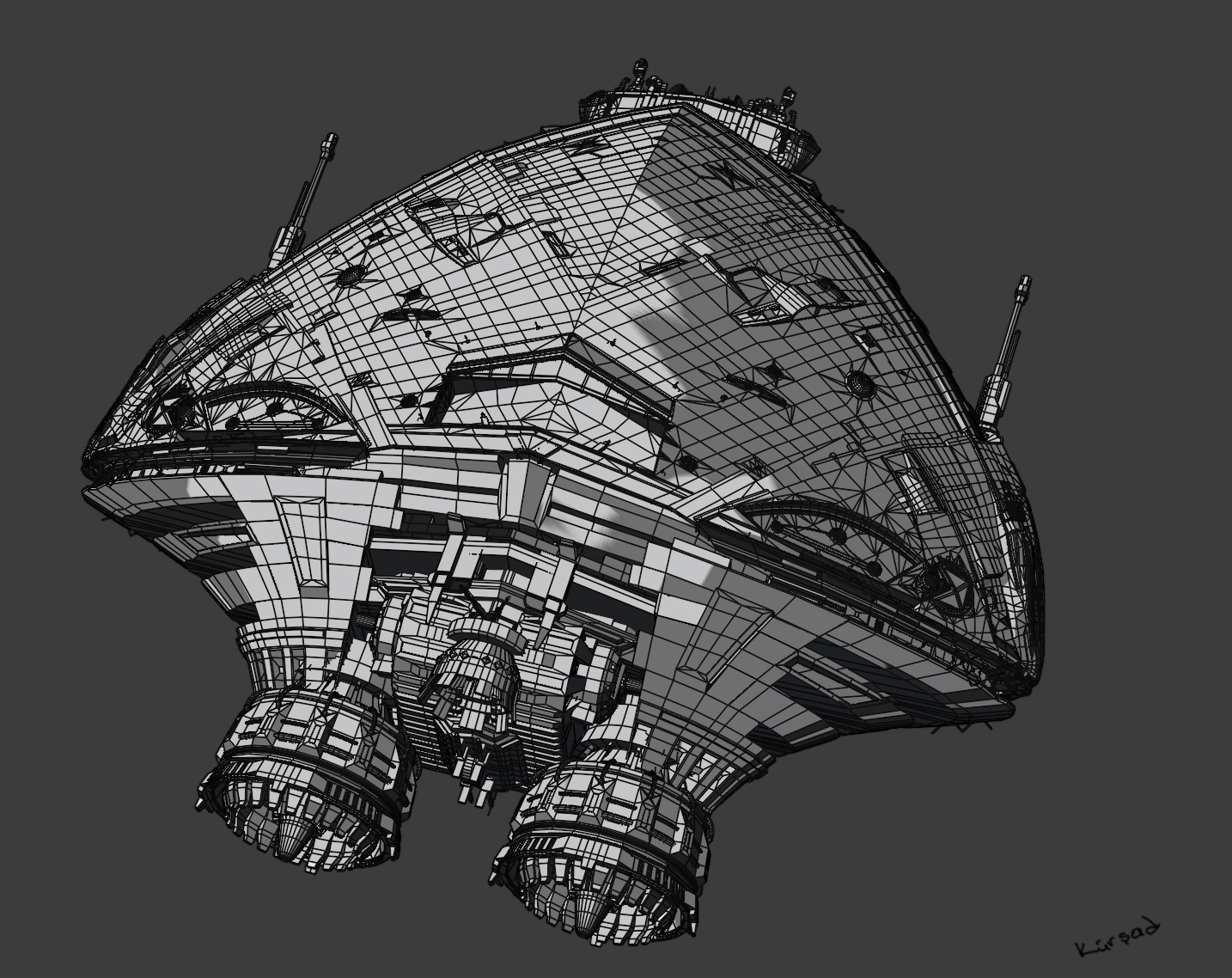 I used almost the same design approach that I used for the rebel warriors, except that I needed more details for this design. The main reason for needing more details was that they were going to be relatively close to the viewer on the page. That is why I relied on kitbashing. I used parts from my previous projects for this ship to create a sense of scale and volume. One thing to note is that I did not want movie-level geometric details due to the style choice I had made. I utilized the mirror modifier with the bisect option here to try different designs with different pieces. The mirror modifier was set to use a custom object for the center and the rotation so that I could shift and rotate the mirror centers easily while trying different ideas. 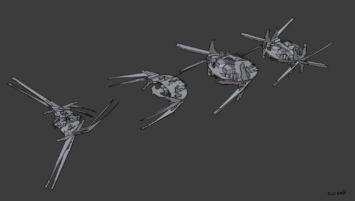 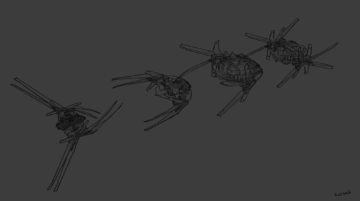 The enemy ships had to look interesting. That was why I focused on their silhouettes first. To give them a menacing look, I decorated them with spiky wings and insectoid features in the models. I relied once more on the mirror modifier with bisect option for these designs. 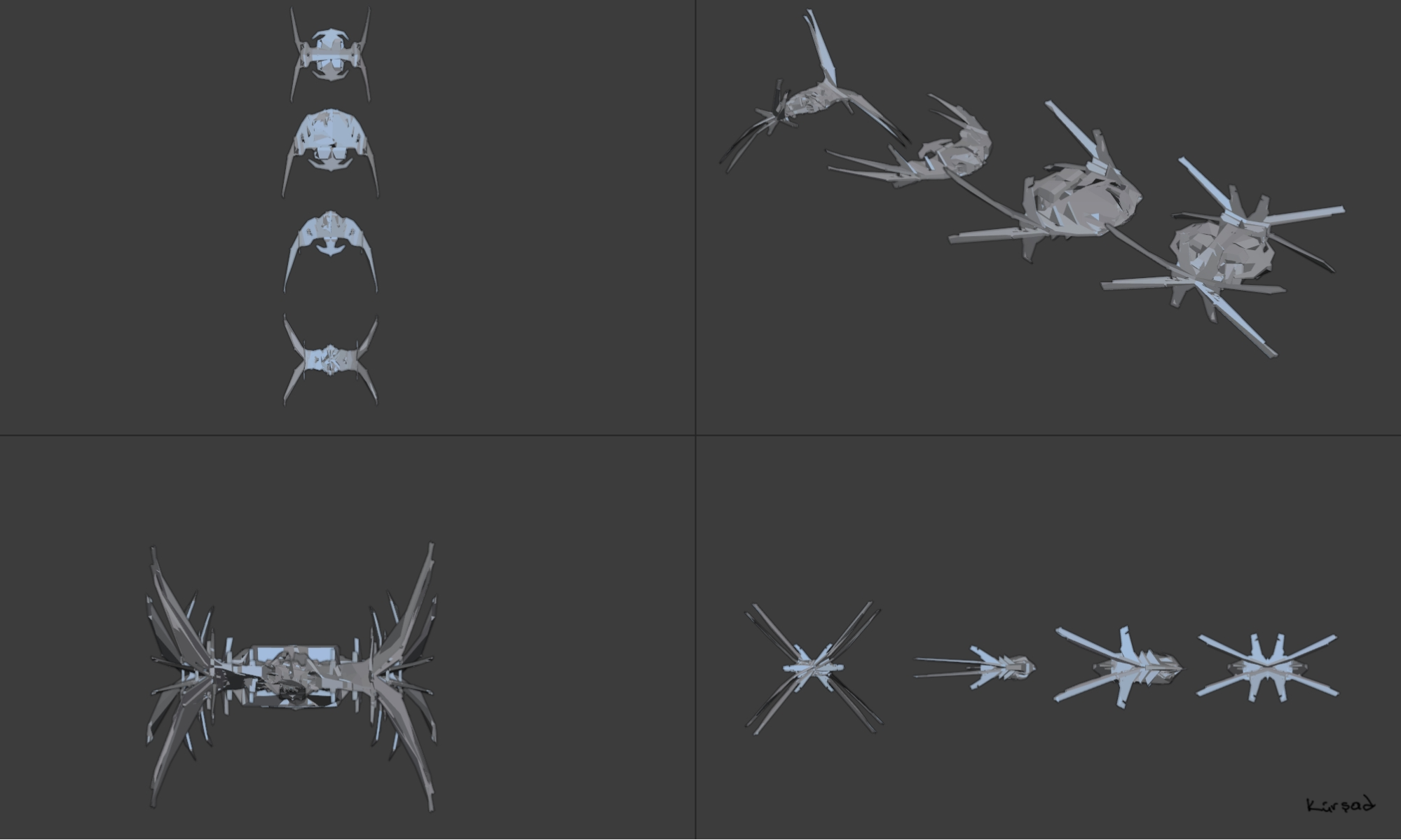 I also wanted a lot of them that were flying around the base to be shooting lasers at the rebel ships in the sky. Achieving that massive space battle was relatively easy to stage in Blender. I added a volume particle system to an ellipsoid and let it use the collection that was holding my master enemy ships.

Blender’s particle system lets you choose any collection as the instance source with randomized picks. 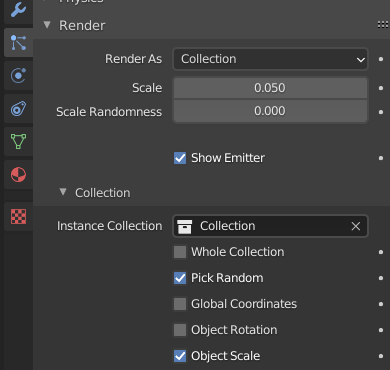 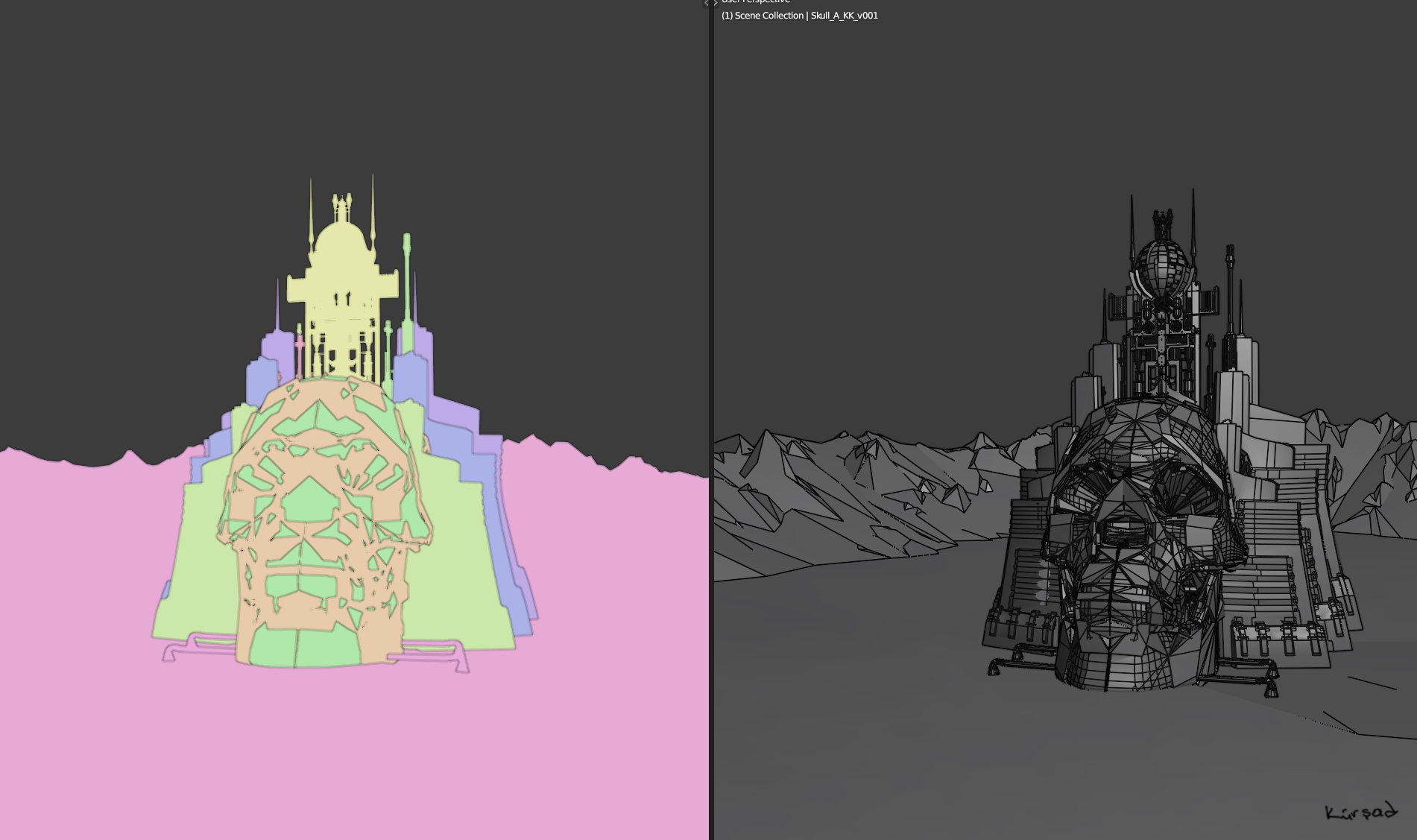 The main design goal of the kingdom’s palace architecture was to be menacing and slightly geeky looking. That was why I wanted to include a skull shape in the model of the palace. I used a 3D scan of a resin skull that I had scanned a couple of years ago. Then I imported the mesh into Blender and started playing around with it. The original forms of the skull were way too organic and curvy looking. The decimate modifier was helpful for getting rid of some of those shapes. With a bit of extra cleanup, I was able to get an architectural looking skull shape.

Once the largest shape was in place, placing some basic shapes around it was the logical next step. While doing so, I realized that the structure was missing the sense of scale, which is when I started putting small frequency details around it. The details themselves did not matter so much, as long as they were adding some value to the general shape. This would be a distance object anyway. However, the overall silhouette had to be recognizable and provide a strong sense of strength. 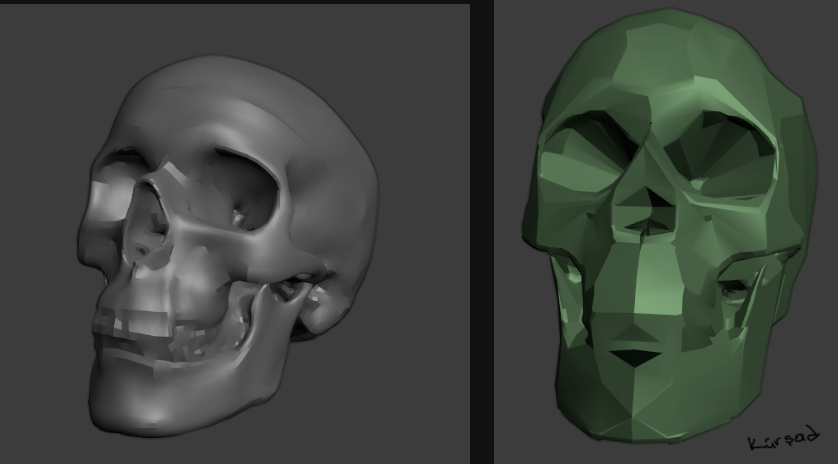 Other structures and vehicles

To provide more depth to the scene and the story, more structures and vehicles were needed. A lot of work went into adding the tertiary details like those below. 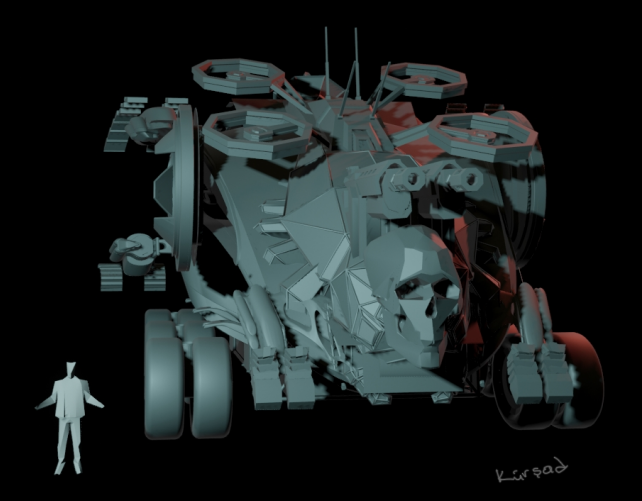 I relied on a bit of kitbashing and model scraping to get these tertiary background items established while still trying to make sure their designs conformed to the general outline of the project. I used the particle and the array modifiers to populate them in the scene. 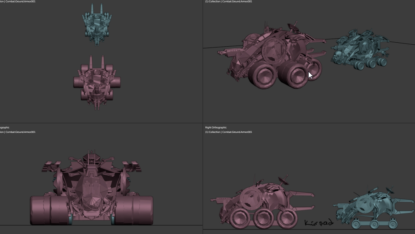 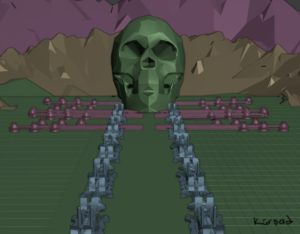 For the general shading, I chose a simple combination of a principled shader and a custom color scheme based on the normals of the faces. 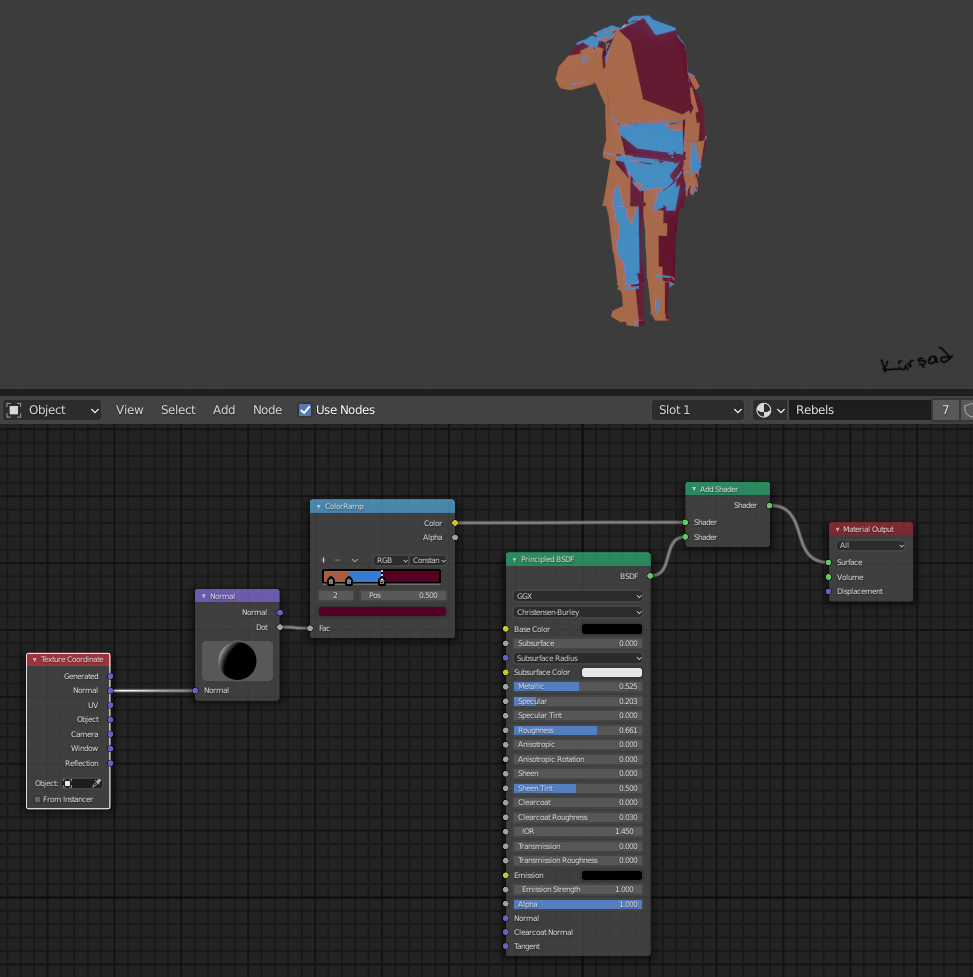 The rest of the objects in the scene used similar materials with varying colors.

Since one of my original goals was to keep the post-processing as minimal as possible, I kept the number of compositing nodes to a bare minimum by just adding a couple of correction nodes and adding a paper texture overlay on top of the actual render.

This project was a lot of fun to work on. It had its own challenges like keeping the design cohesive and finishing it in a short amount of time. This project probably would not have been as much fun to work on if the EEVEE renderer were not part of Blender at that time. It is definitely an amazing addition to Blender, especially for those who want to use Blender as a digital illustration tool.

One thing that was extra useful was this tiny matcap that comes with Blender. I used it a lot to check the consistency of my shapes in the composition. 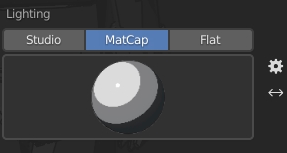 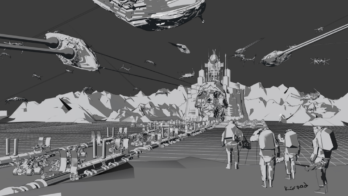 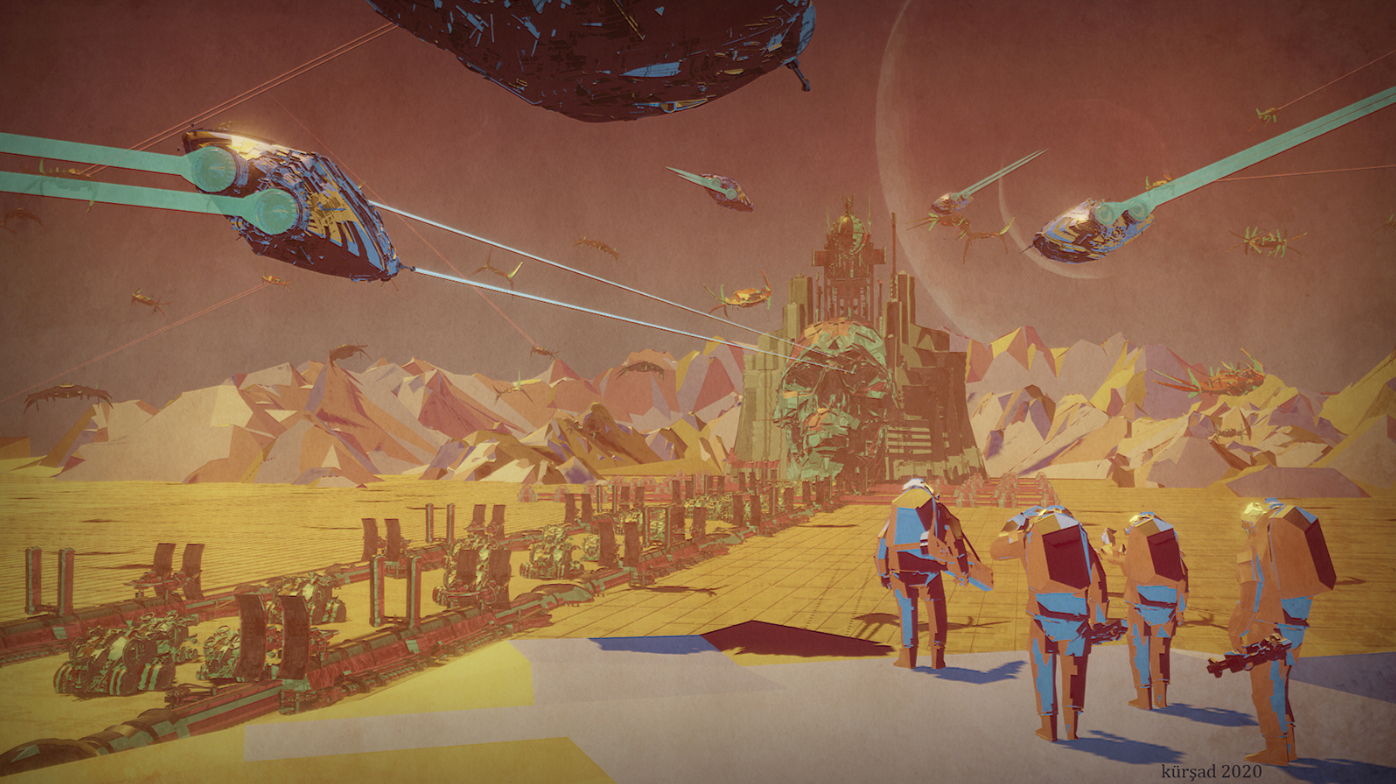 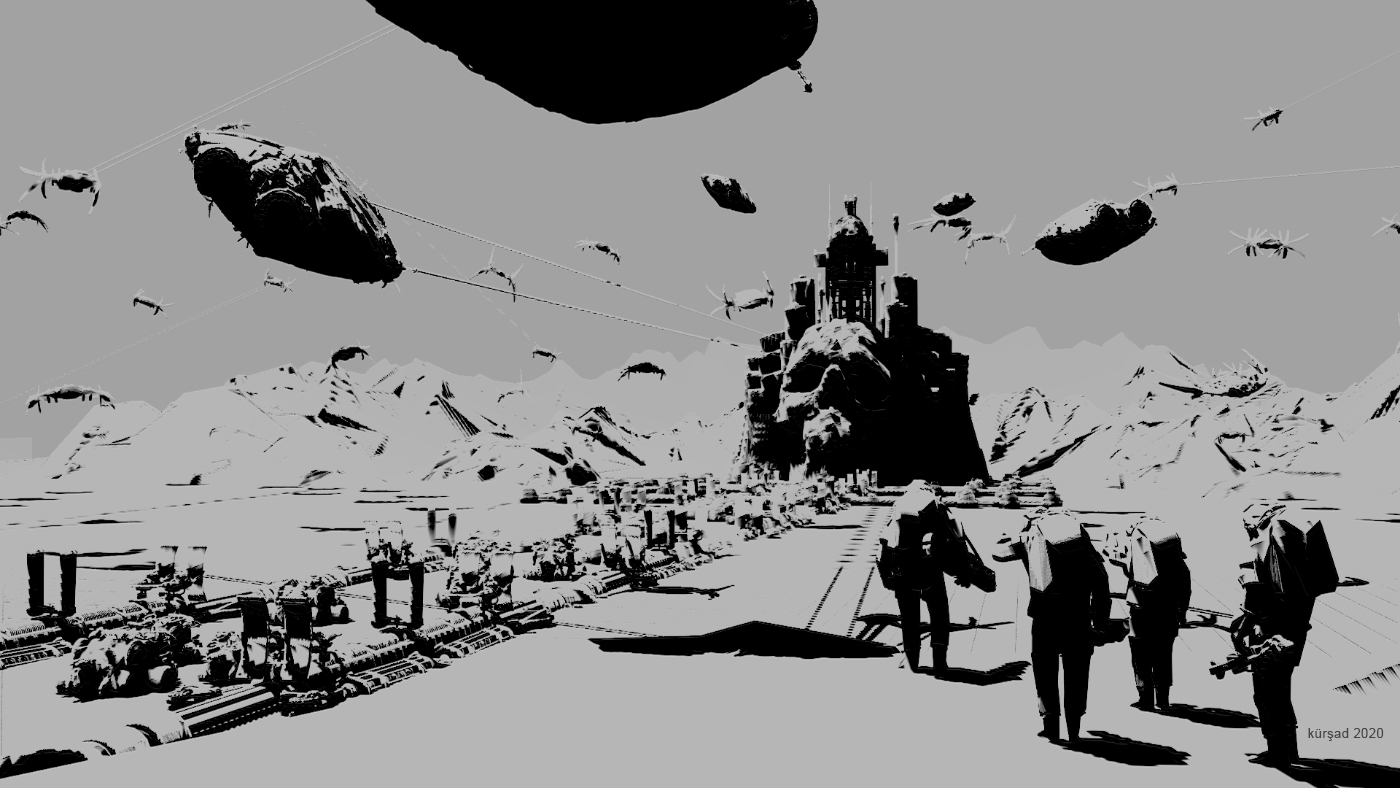 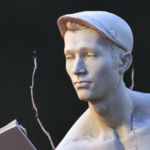 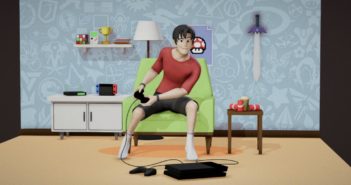 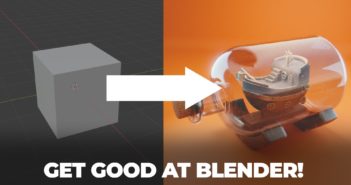 Next Article Get Good at Blender 2021!