Have you been hearing the term ‘Quaternion Rotations’ in Blender and wondered what they are -- or even how to control them?

What this article covers

Quaternions are 3D rotations performed by the multiplication of quaternions.

Before explaining how these rotations work, we'll need to define a few terms first.

1) In computers, everything is represented by numbers.

Numbers make up everything we do on computers (including Blender). Whether it is a character, an operation, the position of a pixel on your screen, a color... or even a number.
Blender will see all operations and input as numbers.

2) Any point in 3d space has three coordinates.

A number in the form of a ‘triple’ (a, b, c) can represent a simple point, but it could also be another 'type'.

A 'type' refers to a point, but also a color, or a vector.

One type can even change into another, which is what we call 'type-switching'.

3) A triple can represent a vector type.

You may remember vectors from high school maths: a vector is like an arrow, with a direction and a length, but not a fixed position.

It can be placed anywhere in 3D space, it is still considered the same vector, just with a different triple. 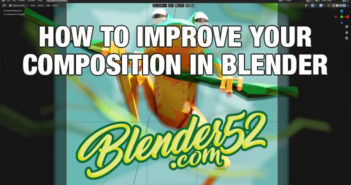 Next Article How to Improve your Composition in Blender