Hello BlenderNation readers, my name is Steven Hellemans and I'm a self-taught 3D Artist currently employed at the Brussels office of 3DExcite, which is mostly active in the automotive industry.

I used to work with Modo and V-Ray quite extensively, but since Blender 2.8 I've made the switch and this Lamborghini Centenario project was my first decent portfolio piece made with it.

As with any project, thinking ahead and being well prepared pays off later on. For this project, I wanted to create a supercar press release style image that focused solely on the vehicle itself. Since modeling is not my strong suit, I searched online for a (free) high-quality 3D model and stumbled upon the Lamborghini Centenario by Jakub Przybolewski.

As you can see in the above image, the lines go smoothly from one panel to another. Any modeling inaccuracies can cause annoying artifacts in the reflections, making the lighting stage harder. Thankfully, the model was of great quality and so the project was off to a good start.

Then it was time to search for references. Since the best references are the ones you take yourself, a real-life sample being the best, I browsed the Lamborghini website looking to buy a Centenario. You know, for research purposes. Unfortunately, they weren't available anymore, so I had to resort to Google and Netcarshow.com for references. Another good place to check is YouTube—it can be especially handy for some closeup details.
Nowadays most car manufacturers have an online car configurator, which is ideal for creating the perfect variation of the car. It's a great reference for material assignment and also the paint names and colors are listed, making the search for references easier.

The first step in my 3D workflow is creating a decent structure in the scene, which facilitates all the later steps. The paint pieces were put into a separate collection, as were the wheels. To save memory usage, I made an instance of the front and rear wheels and not a duplicate. Since I was going to use view layers to render out my different lights, I also created separate collections for those lights. 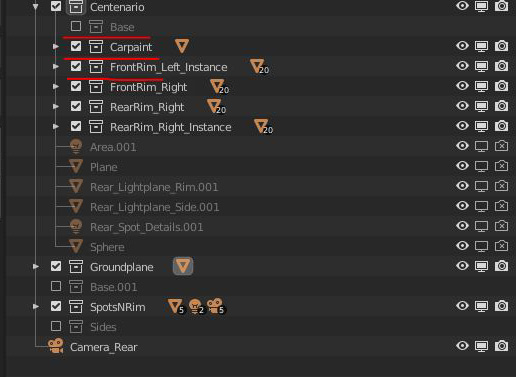 The second step is to create and assign all materials. Since I had no library of Cycles materials to start from, all shaders had to be created from scratch; I really took my time to make them the highest quality possible. This is where the references from earlier come in handy.

Perhaps the most important tip I can give you is to always develop shaders in the same lookdev environment, so that the materials are visually consistent and should, normally, require no more tweaking on a project basis. For this lookdev environment, I would recommend using an HDRI that is of high quality and/or is a light situation that you know well. 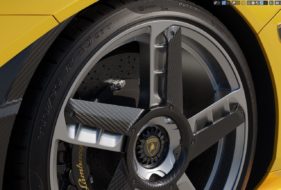 This is the part of 3D that I enjoy the most as it can really make or break an image. Since the Centenario has a lot of hard cut lines and shapes, I decided upon a fairly soft lighting style. As an example, I will use the full front image, which has a perfectly symmetrical light setup. There is one spotlight at each side to brighten the front part of the car and introduce some specularity into the paint. Additionally, planes with emissive shaders were used. A handy tip is to assign a quadratic sphere gradient texture node to a color ramp and plug that into the alpha of the PBR shader. This allows for finer control of the softness of the light plane.

A light plane was placed at the rear of the car, generating the rim light that defines the silhouette of the vehicle. And then a top and front lightplane gave some nice light across the front of the car to really capture the viewer’s attention.

Since Blender does not support light linking yet, I rendered out the different lights separately to combine them in post later on. Since a car consists of so many high shine materials, lighting a car comes down to managing reflections while at the same time maintaining a balanced visual coherence. For example, a specific light on the wheels may look great, but it could cause horrible reflections on the side of the vehicle. Therefore, render them out separately and combine them in post.

The final step, oftentimes overlooked by 3D artists, is to add some final touches to the renders in a post-production package such as Photoshop. Since 3D mimics reality, I try to work in a manner that is consistent with what we would do in real-life. A photographer rarely uses an image straight from the camera without any post-production. No, they would perhaps combine several photographs together and give the resulting image some grading, which is exactly what I did.

For the background, I rendered out the base image, which was quite dark. Then I added the brighter background image on top of it and in Photoshop masked it out to give a dramatic fall of light on the ground. The glow around the silhouette was also added in Photoshop, so I could get it somewhat consistent across the different images. Also, it's very quickly done in Photoshop, whilst in 3D it might take more time to get right and could require an additional render. Always use softwares to their strengths to work as efficiently as possible.

Afterward, I combined the renders of the different lightings by putting the renders on top of each other in the lighten blend mode and masking out the unwanted parts.

Then I added some (local) adjustment curves to boost contrast, and saturation adjustments were added. To finish it off, I used a camera raw filter for some general color grading.

Hopefully this behind the scenes articles provided you with some insights into my workflow. 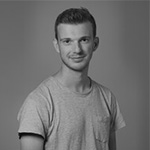 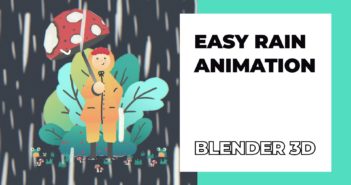 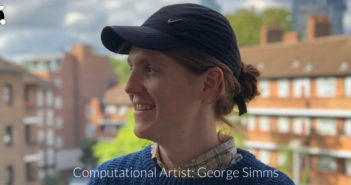