Hello everyone! My name is Gareth. I work as a digital designer for an agency here in the UK. I’ve been using Blender on and off since I saw it featured in a gaming magazine when I was at school. Over the last couple of years it has really become an essential tool for my work. I want to say thanks to all the developers and the community who’ve contributed towards making Blender into such a great tool.

In my day job we use Blender for product visualisation, illustrations, and real-time models for use on WebGL websites. Since EEVEE has come along we’ve been able to produce animations that would have been too time consuming and expensive before. Working at an agency can be pretty hectic and time constrained though, so I like to do the occasional personal project when I get the chance. I find it’s the best way to keep up-to-date and try new things.

Below is a breakdown of the last piece I finished (a lot of them don’t get that far!).

I try not to have much of a plan to begin with for personal pieces. Sometimes I'll see a photo of something online and be struck by an idea, other times it’ll be something in the back of my mind that takes a while to surface. This time it was just the vague notion of something bright and dream-like. I always try to create a quick doodle in my sketchbook first as it forces me to think about the idea a bit before diving into all the settings that Blender offers as that can derail me occasionally. 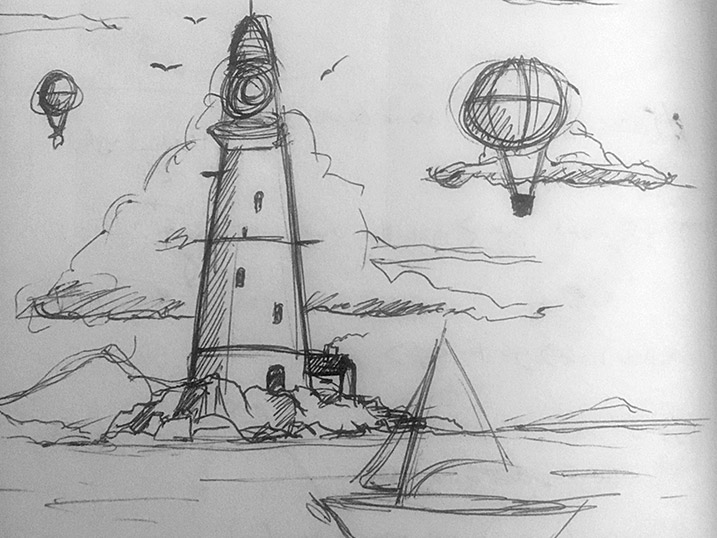 At the start of the build I try hard to stick to basic shapes and work only on the composition and lighting. It’s really easy to get distracted into modelling details too soon. I turn on the passepartout option to a high value and use the free look camera (shift + ` ) to move around the scene and get the right shot. 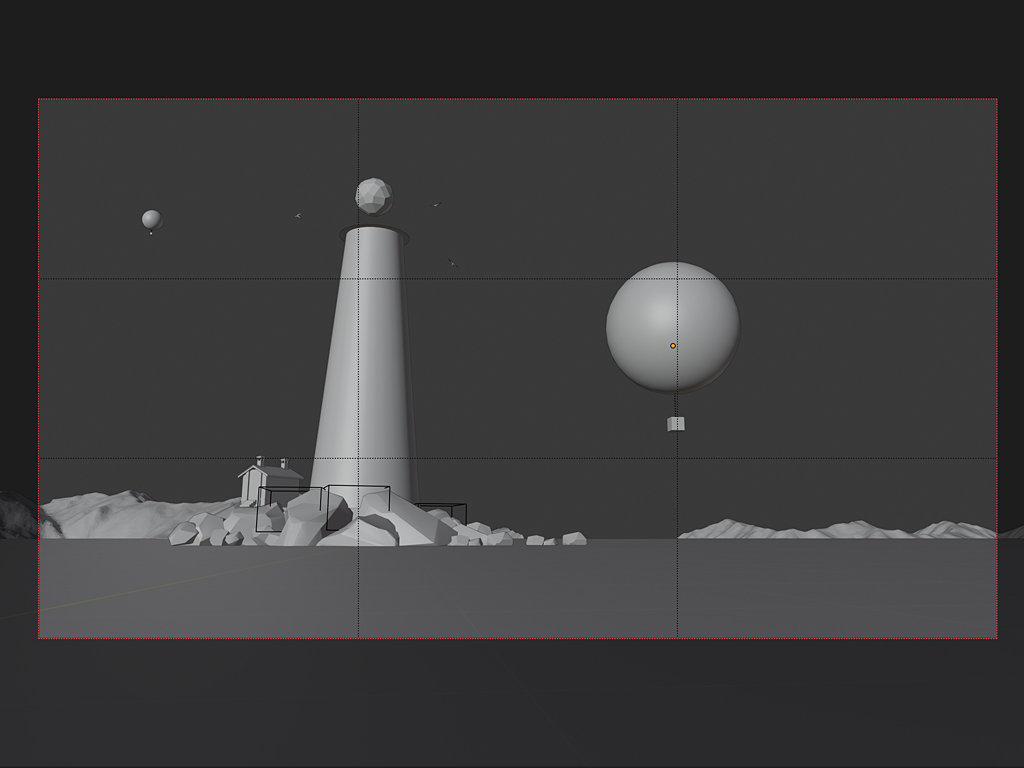 My lighting setup for outdoor scenes is super simple. A single sun lamp with a blackbody input and a gradient ramp for the ambient world material. I avoid HDRIs for these pieces as they can take away from the stylised look I’m going for. Sometimes I'll throw in a second sun lamp to bring out some details. 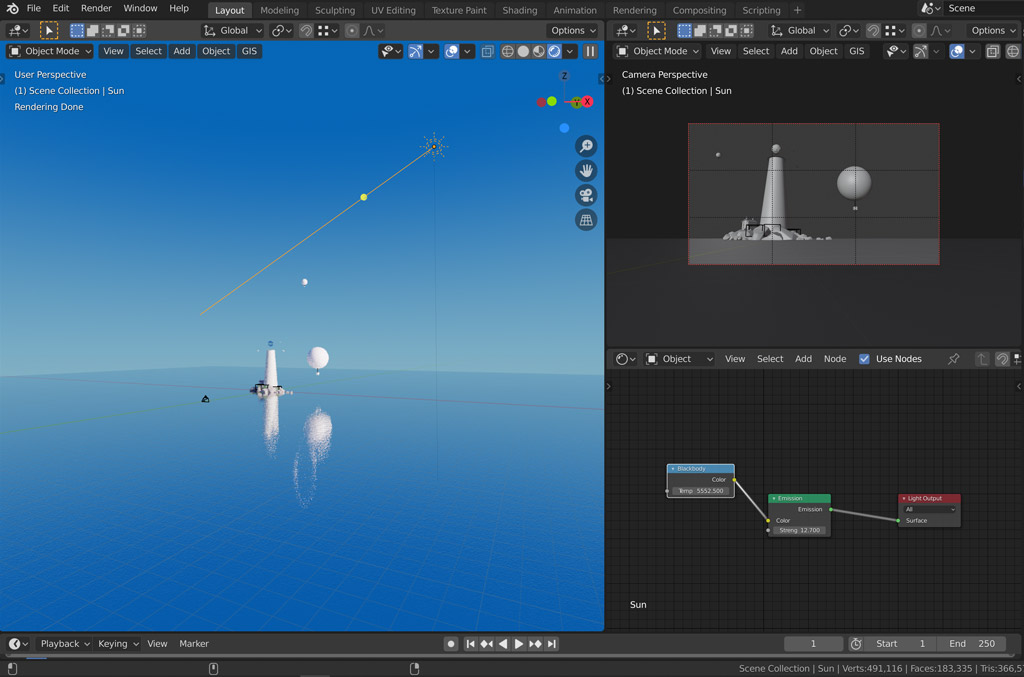 With the overall composition in place I started on the mountains and the atmospheric scattering as I knew that would play a large role in having a sense of scale and distance. The GIS addon was used to import some initial geometry as a base. The result it gives you is pretty hi-res so the decimate modifier was used with a low ratio to simplify it down. Then it was a case of pulling and pushing vertices with the proportional fall-off option to get the silhouette right. 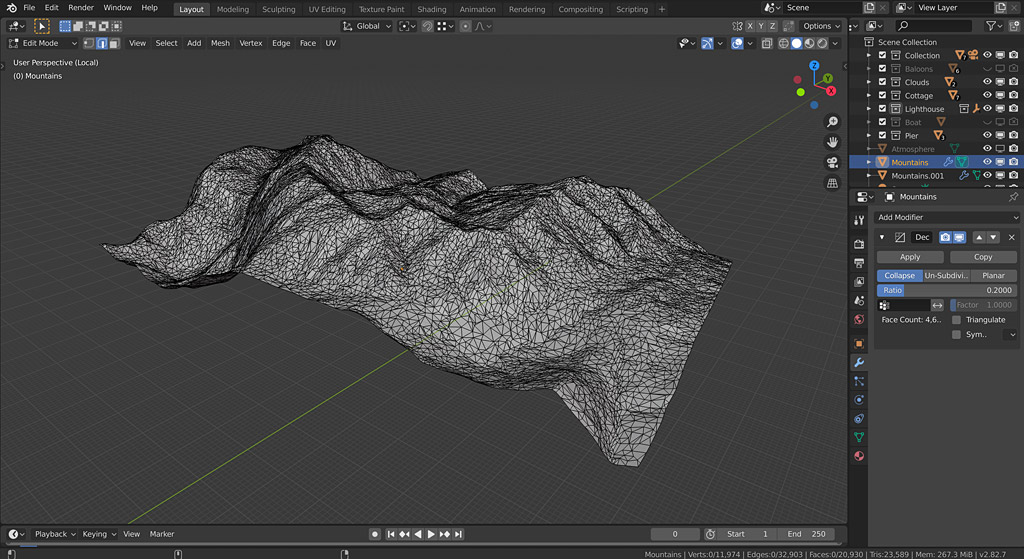 The mist is a volume scatter shader applied to a large cube covering most of the scene. Two gradient ramps are used to fade it off along the Z and Y axes. Scattering, I find, is quite difficult to tune correctly and I spent (probably too much) time adjusting it. Scattering is also pretty heavy on render times so it goes in its own collection and is switched on only for full renders. 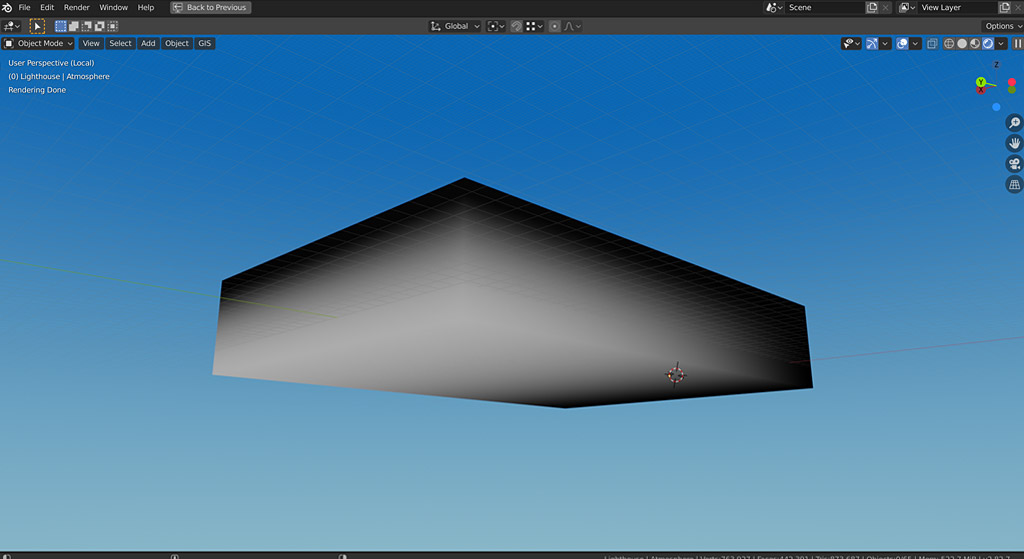 Next up were the clouds. I’ve always used image cards for clouds in the past but knew these particular ones would be quite large and near the camera, so I looked around for other techniques.

The method I came across was to use repeated subdivision and displacement texture modifiers. Clouds are one of the many things in nature that have a fractal structure. By starting off with large displacements and adding increasingly finer ones you get something pretty convincing. 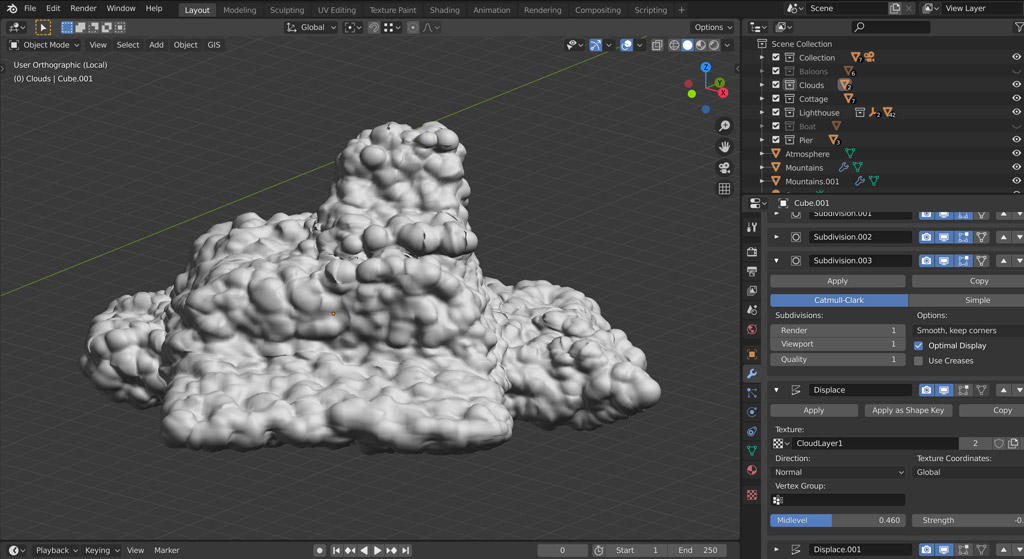 With the background in place, I began work on the island and the lighthouse itself. I modelled a few rock pieces by subdividing a cube and using the bevel modifier on individual vertices. These were scattered around to form the shape of the island.

The lighthouse and cottage designs are based on bits and pieces of various images I found online, taking the bits I liked from each one and combining them together. Construction-wise they are pretty simple. The bricks on the base of the lighthouse are made by extruding cylinder faces using the ‘individual centers’ option and bevelling the result. The ridges underneath the upper platform are created using an array modifier linked to an object that is spun around to the correct angle. I think I need to propose a radial array option, though, as I always forget how to do this! 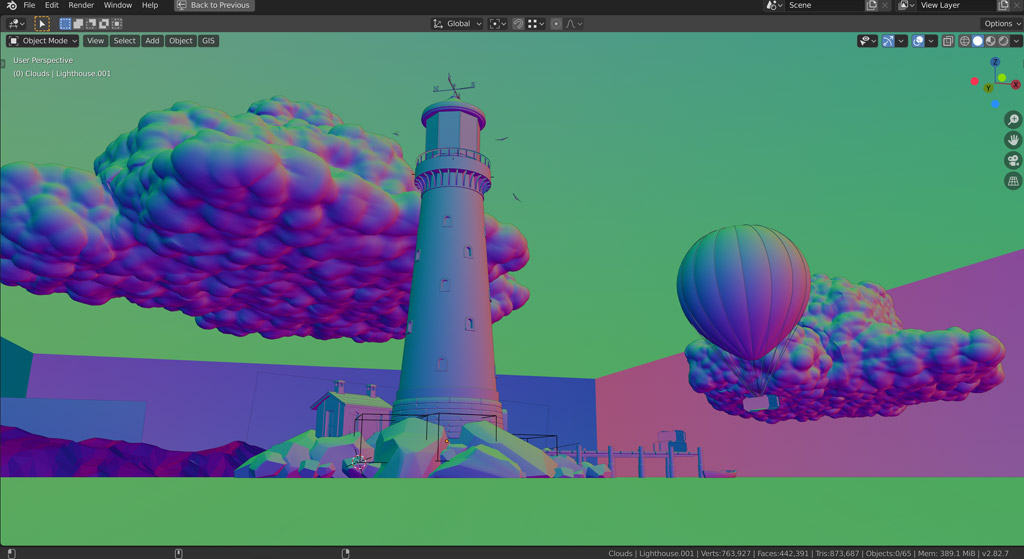 Little details like the balloon, boat and plants I brought in from older projects found tucked away on my hard drive (keeping a good file/naming system always pays off!).

I tend to avoid texturing things too much as I prefer a flat, clean look. Games like Mirror’s Edge and The Witness both have this style and it appeals to me a lot. There’s a subtle procedural brick texture on the lighthouse, rocks and wood pieces. The water is a simple Voronoi applied to the normals of a large subdivided plane. Finally, I added some ‘seagulls’ made from a couple of bent polygons. 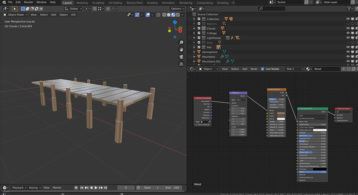 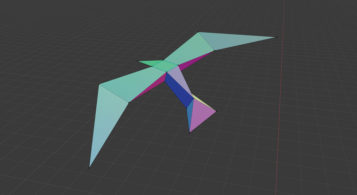 The final steps were to add depth of field and apply colour correction—I actually do this on my phone these days as I can endlessly tweak it while on the couch. :) For professional work I still use Photoshop, but I should really get used to using compositing nodes. 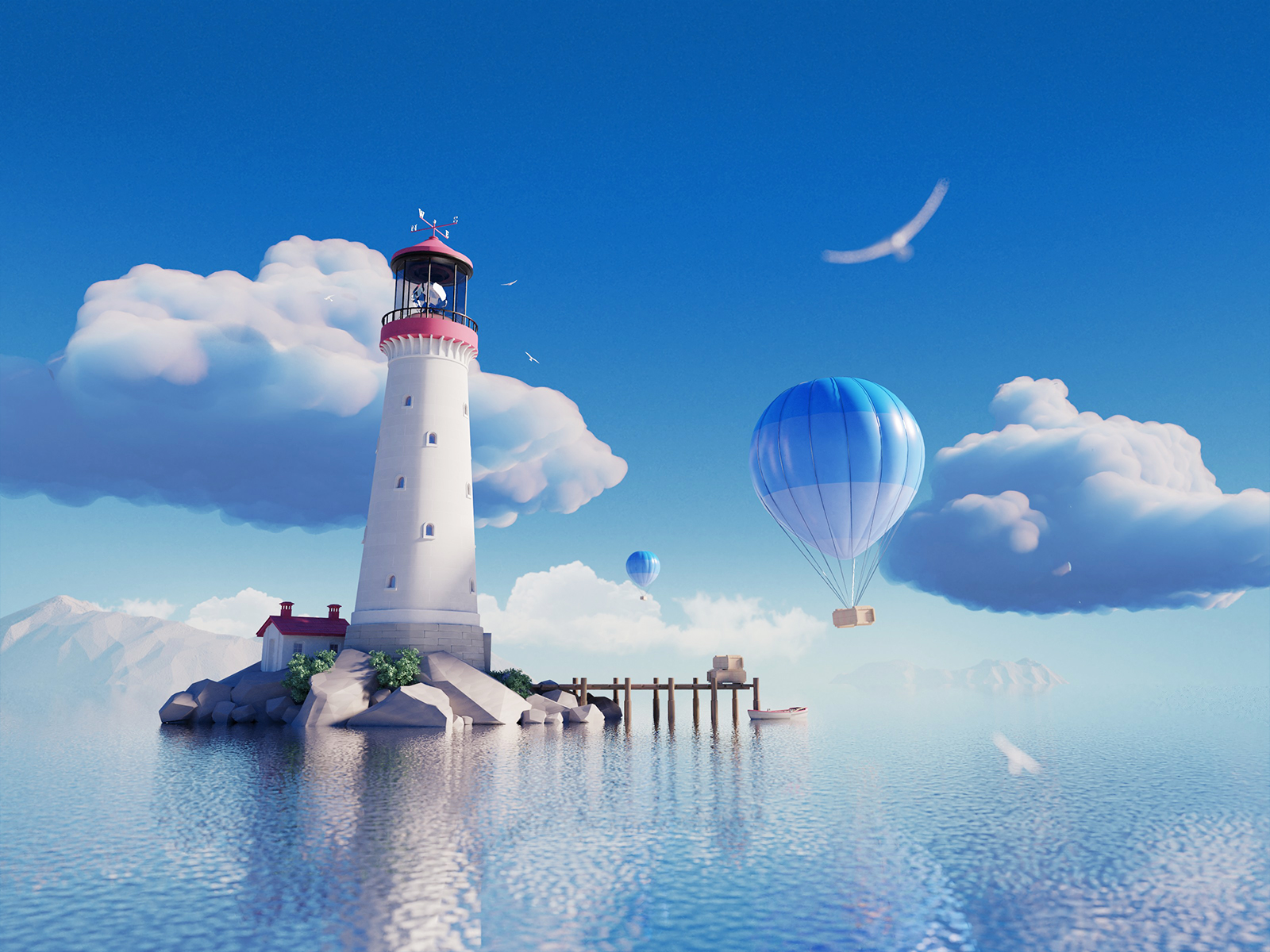 I hope you were able to follow some of that. If you have any questions, let me know on Twitter. I’ve had a lot of help learning Blender from kind people and I’m happy to return the favour. 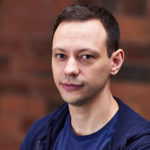 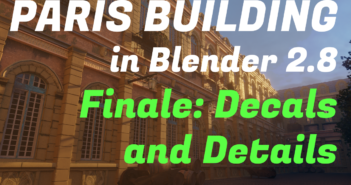 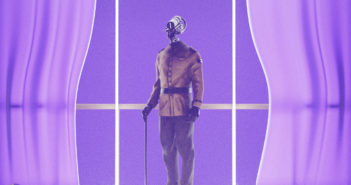