Hello, everyone! My name is Boris Simeonov. I am a 3D artist with a strong passion for hard-surface modeling, more specifically weapons. In the last few months, environments started capturing my attention as well.

I’ve been modeling for the past year and a half using Blender and I love it. Besides that I am currently studying game development at ARC Academy in close contact with amazing and talented professionals from the game industry in Bulgaria.

Although most of the skills I have acquired are self-taught through tutorials and a lot of practice, the academy has helped me immensely with understanding how the industry works and the crucial collaboration between the different departments. Another thing is the very important feedback and constructive criticism by our lecturers with years of experience in their respective fields—it really helps me improve as an artist.

With that said, my journey in the industry began last week, working for Snapshot Games here in Sofia, Bulgaria.

We are currently working on something like a demo video game project in the academy and this cursed katana is one of the two weapons our main character will be wielding during his adventure. Therefore, I had to be careful with my decision on how the weapon should look, making sure it correlates with the universe we have created.

The research, which probably took more time than the modeling/texturing itself, was mainly focused around the Tokugawa clan, as it has a lot to do both with the protagonist and the antagonist of our story. This is why the katana features the triple hollyhock, which is Tokugawa’s Clan crest. 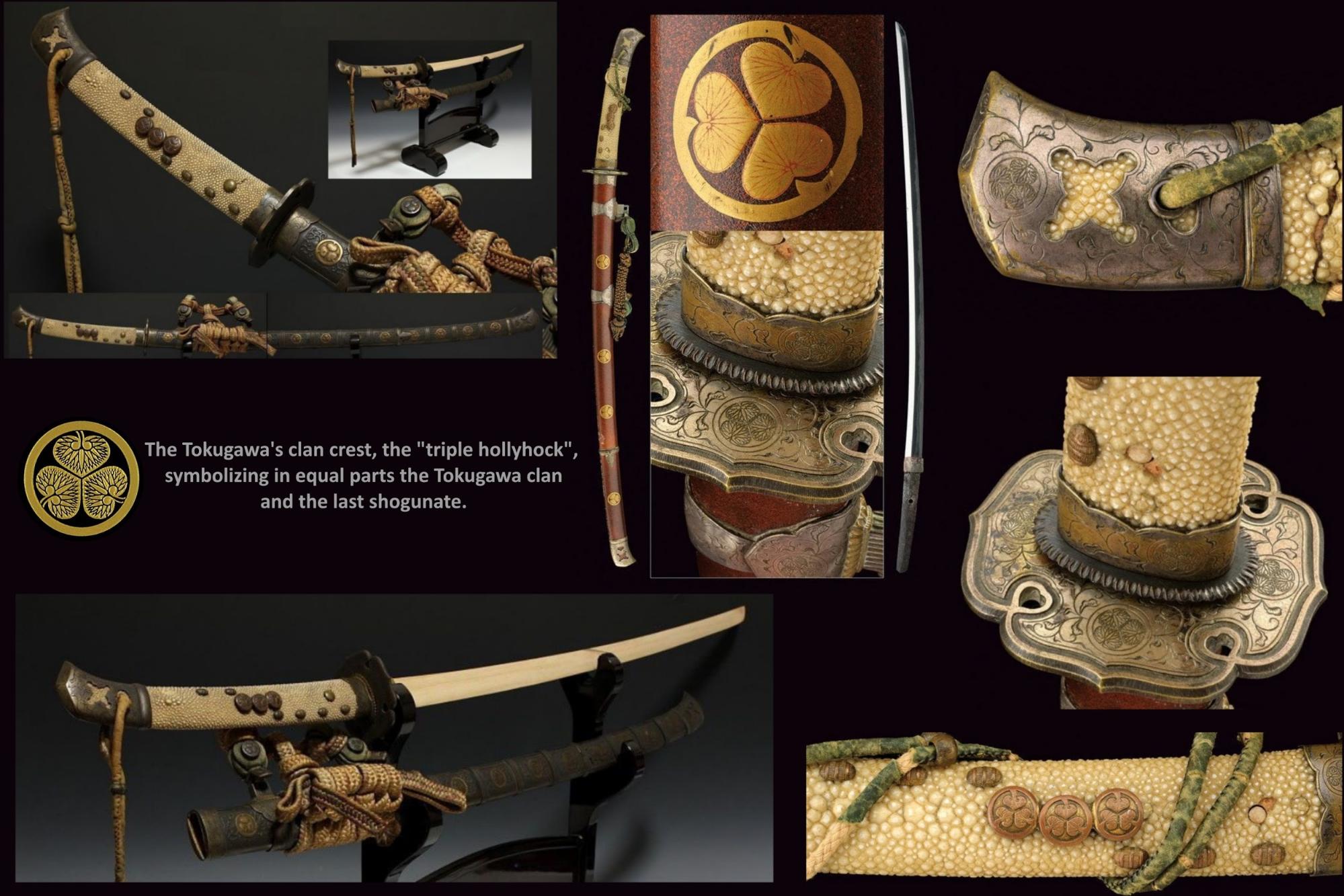 Here is part of our short supporting story behind the cursed katana: “.. as it was made by the famous swordsmith Muramasa and because of the reputation his swords had with the Tokugawa clan, the legend claims that this sword has been cursed and would fill its owner with unrelenting bloodlust under the event of blood moon.”

The modeling part is nothing too fancy, mostly because the parts of the katana are relatively simple in terms of shapes. Pretty much everything was modelled using the mirror modifier, mesh deform (used to bend the meshes), booleans and the subdivision modifier. 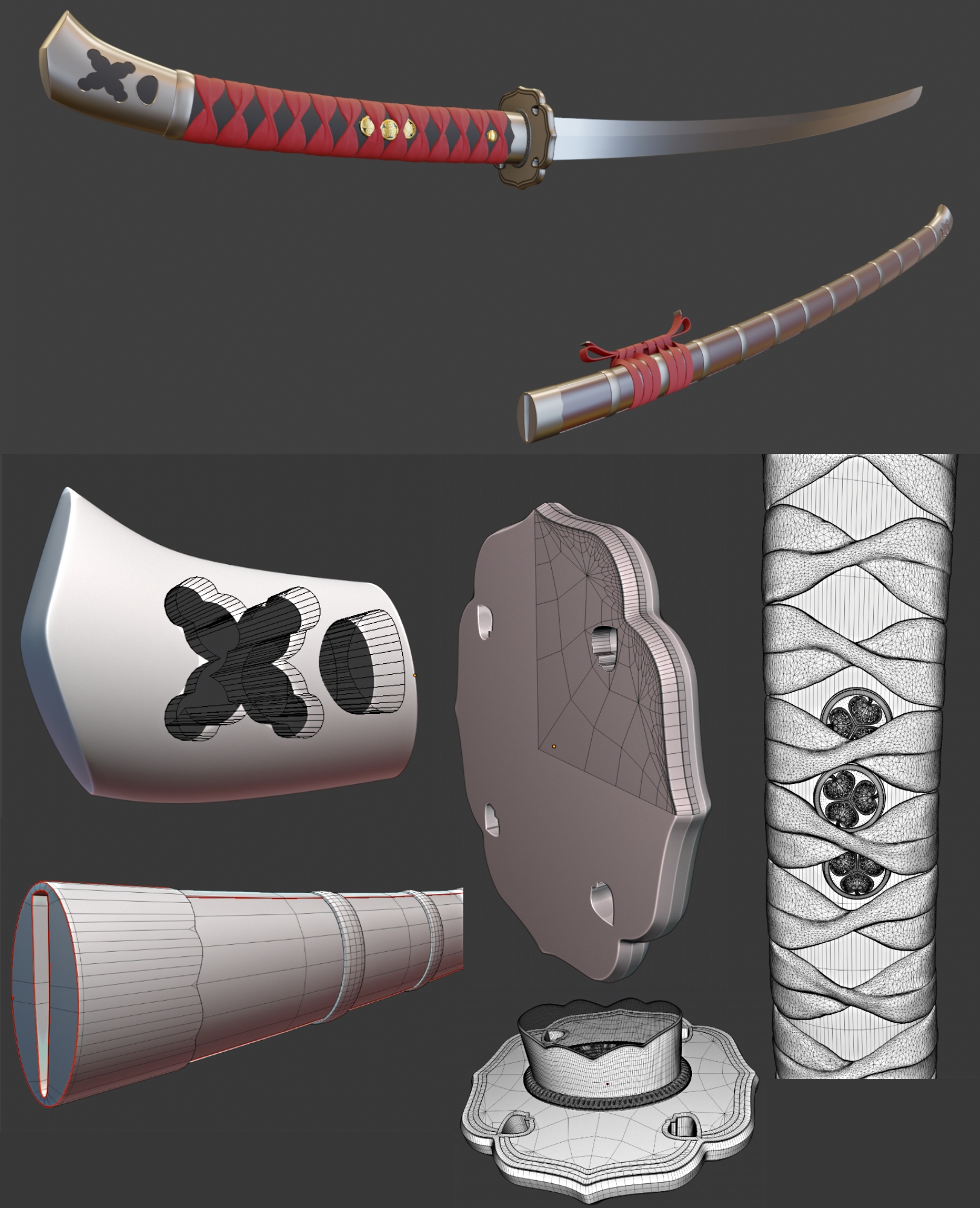 For the Tsuka ito (Cord wrap on the handle), I just poorly sculpted one of the wraps, mirrored it, used an array and then bent it with the mesh deform modifier along the handle using a primitive cage.

What I knew would take more time was the sageo on the saya (the knot on the scabbard), thus before modeling it I went ahead and learned how to tie one, which helped me with the process.

The sageo was made with a curve, plane, and a solidify modifier, accompanied by some sweat until I got it right. I did half of the knot, mirrored it, connected the mesh with the first one and tweaked it a bit, to add some variation. 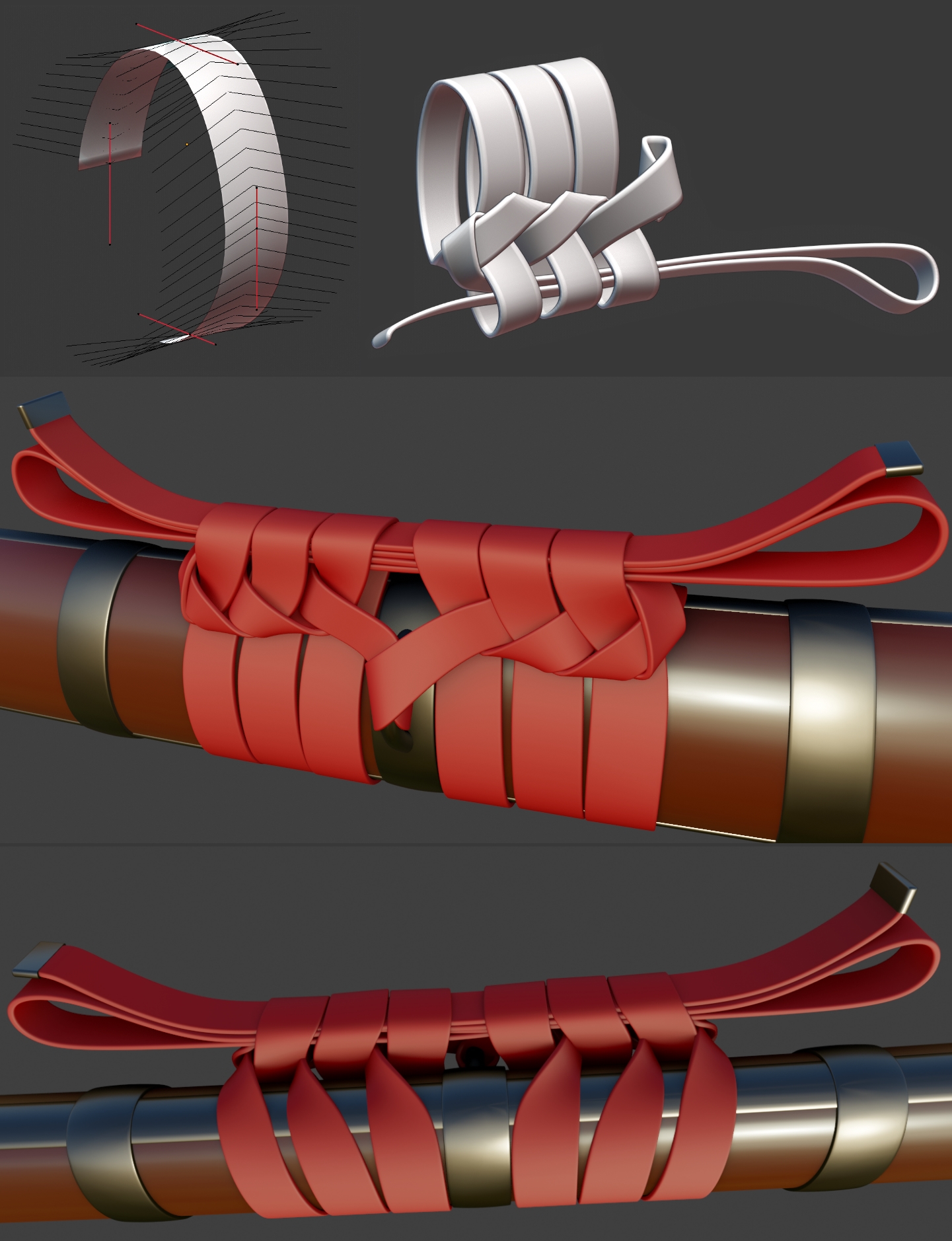 For the low poly mesh I just went and lowered the subdivision on the high poly meshes and removed the unnecessary edge loops. And because this is a game asset, most of the details were just baked from the high poly.

This is probably my favorite part, as it brings life to the model.

Before texturing the asset I knew I was going to use the colors from the references I gathered (bronze and dark blue-violet), but I also wanted to add some contrast that would make the weapon stand out from the environment, reminding you of its “powers”. That’s why I went with this blood red color on the woven fabric and I think it turned out well.

The handle of the katana was divided into three separate masked layers (Base of the handle; Bronze ornaments; Cotton Wrap). The base underneath has a dotted texture to resemble the material from the references, although I made it a bit less noisy. The ornaments use the same material I made for the rest of the bronze parts of the model. And for the wrap I used this woven fabric I found on Substance Source and rebuilt it for my purposes. This fabric material was used for the knot as well. 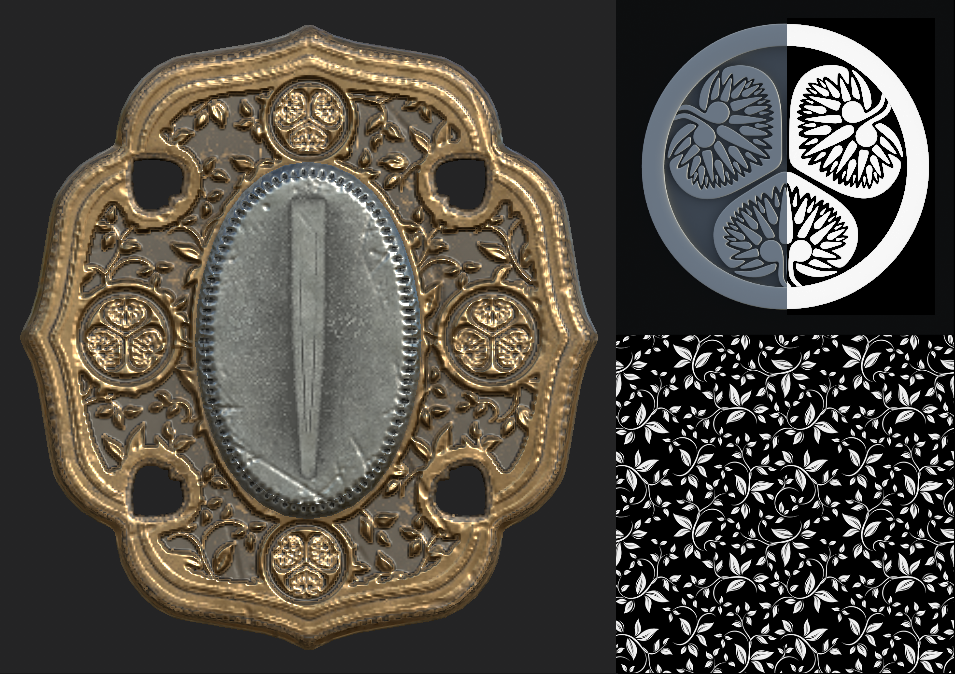 Tokugawa’s Crest (the emblem) was first modeled and then rendered with an orthographic camera to create an alpha that I used in SP.

The flower pattern was applied with a stencil and a mask, using the texture shown above that is also used on the fuchi and the scabbard to maintain consistency throughout the model. Anchor points were also used to make the pattern behave like part of the mesh.

The so-called hamon was created with a Mask Editor and an image input (Gaussian Noise) that was controlled by the Curvature of the surface. Afterwards I duplicated and tweaked it to make the second layer.

The saya was separated into three parts using masks. The first one covers the main body, the second one the bronze parts and the third one is for the parts of the sageo that were baked on the mesh.

Here the main body pattern was defined by a mask, a fill layer with the pattern from before and a few touch-ups with the levels effect.

The model was rendered using EEVEE with a three-point lighting system that I set up. I also made the weapon stand you see on some of the renders, just to make the scene a bit more interesting. 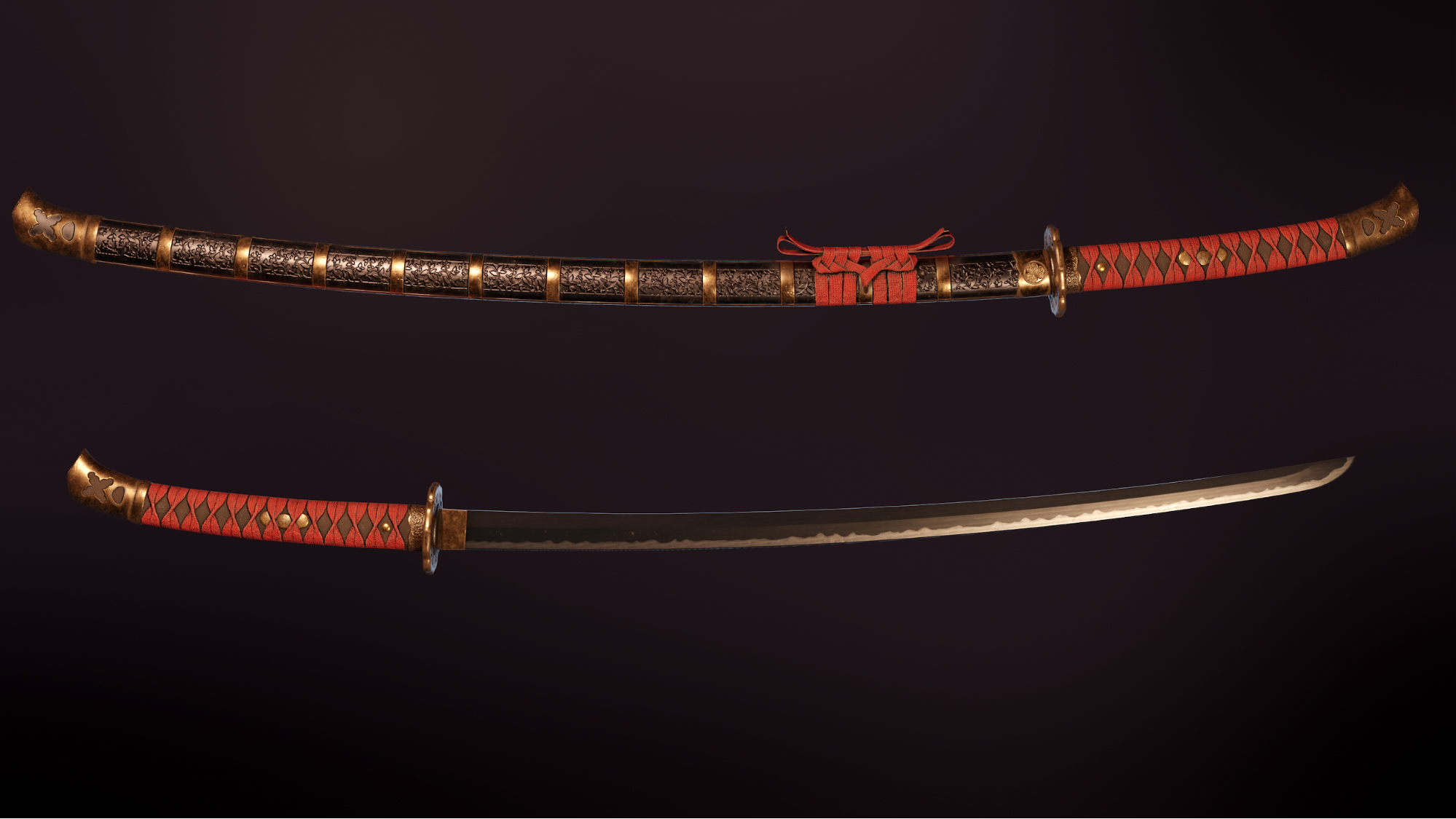 For the post-processing part I wanted to keep things simple and more "natural". I used Paint.NET and played around with the contrast and saturation of the image to enhance the warm color. For finish I just added a grain of sharpness to the renders to make them better pop from the background. 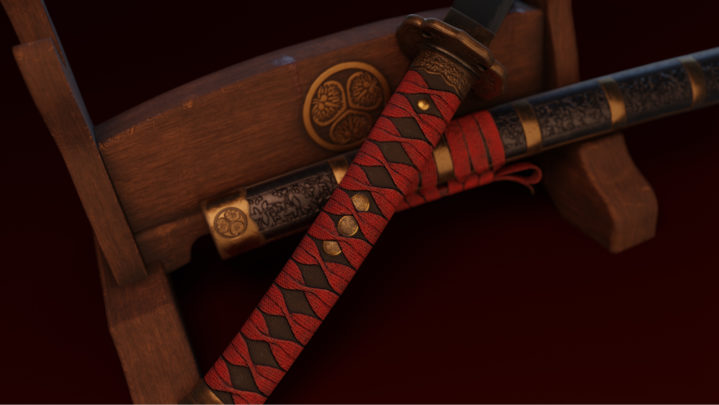 One of the many reasons why doing 3D is such a passion of mine is because it gives me satisfaction and I always come across something I didn’t know about before. With this one I learned many new things about Japanese weapons and culture, and definitely expanded my knowledge about weapons. 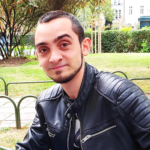 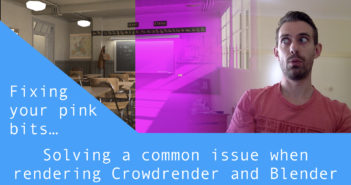 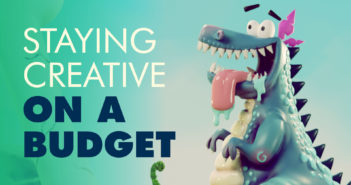 Next Article Staying Creative on a Budget