My name is Youil Samara. I am 28 years old and I live in Brazil. I work at a company focused on making educational games in AR and VR. I graduated in Game Development and I specialize now in animation and special effects. In my free time, I make renders for practice.

I use Blender, Photoshop and Substance Painter for most of my works.

Since playing Undertale for the first time, I have wanted to do create something based on it. I always found Chara fascinating, because despite appearing only at one point in the game, she leaves a mark and you can’t forget her.

The moment I wanted to depict is in the final part of the game when the character interacts with an NPC, but my twist is to change the protagonist for Chara. 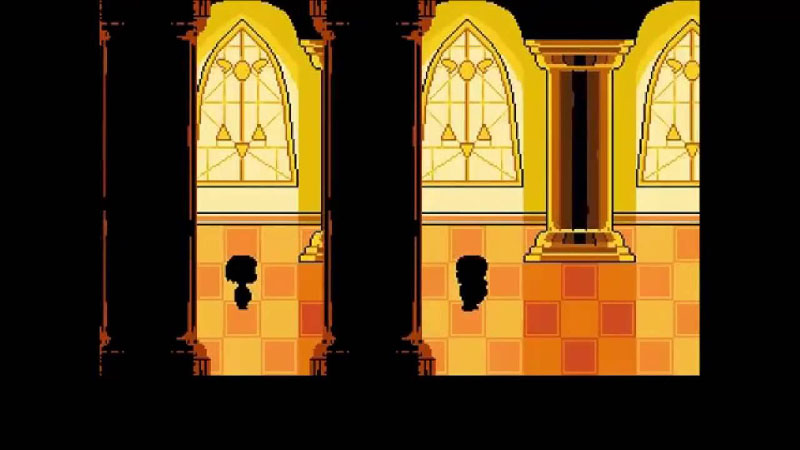 The hardest part was transforming an 8-bit character into 3D. And to make it more challenging, there is no official art of her! 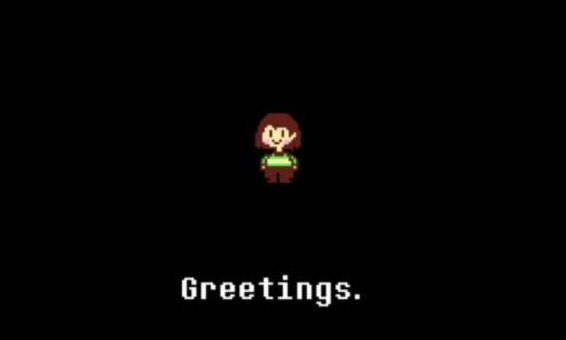 So I based my work on fan art, taking the common features that everyone uses to depict the sprite, like the green sweater with the yellow stripe. The brown pants, or shorts, the red cheeks, and the eyes. 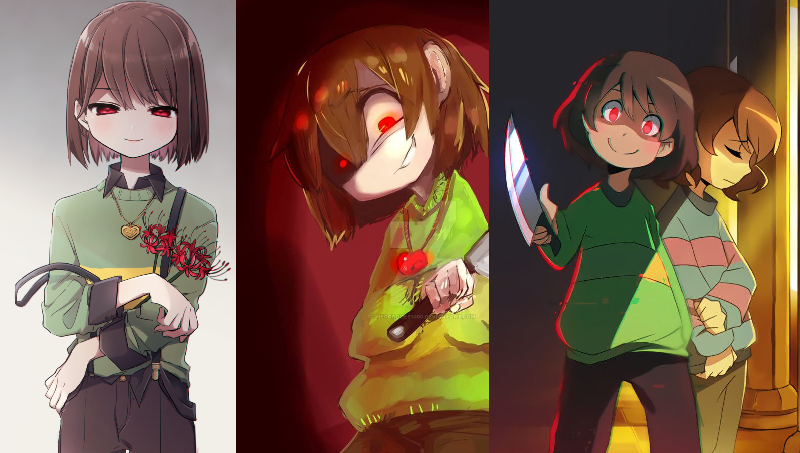 My final goal was making a version of Chara that everyone would recognize, but with a unique style. I wanted it to be my own version and not a 3D version of a specific piece of fan art. 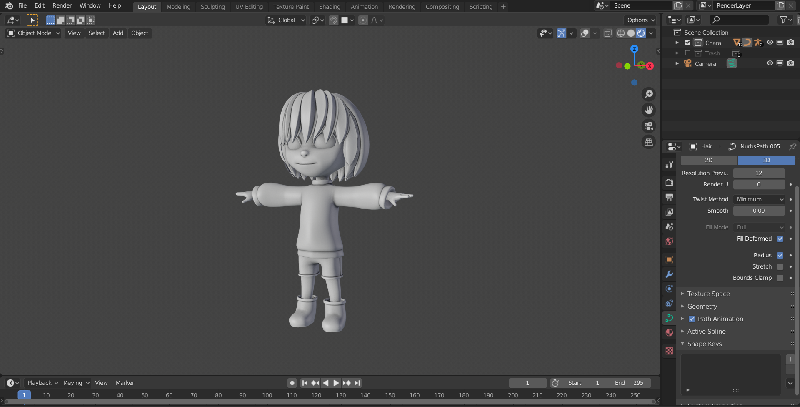 The modeling was done in Blender 2.81. I used the sculpt tools to make the head and the body, and for the clothes I used the basic toons, making them from a cube. The hair was made using the curve tool.

For the environment, I made pillars, a plane with square holes for the windows and a tile ground, all placed with the array and mirror modifiers. 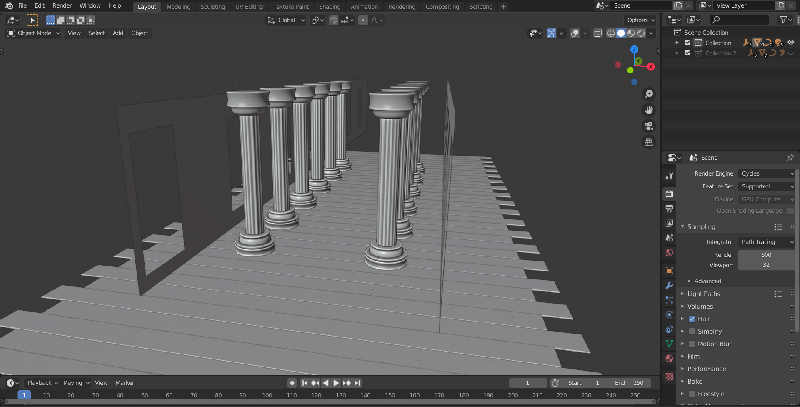 With the model ready, I started texturing her. The skin was made with Substance Painter, using the skin smart material and changing the settings a little. The material I used for Chara is the standard Principled BSDF. 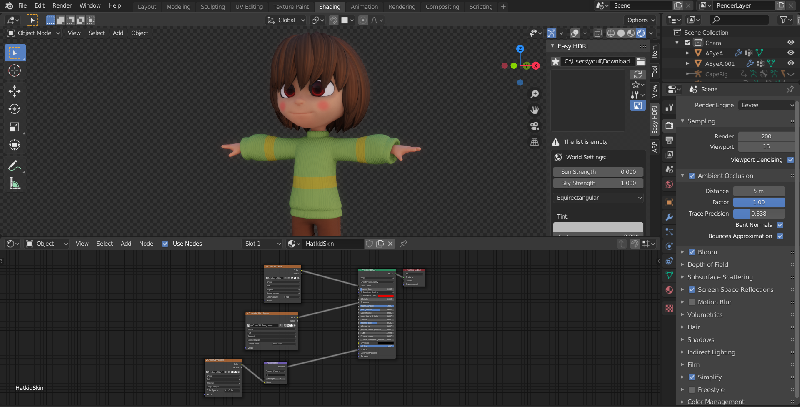 I painted the clothes in Blender, and the normal maps I got from textures.com.

Texturing Chara and the environment was the easy part of the project. I already knew what kind of texture I would use for each part.

For the lighting, I set the world strength to zero, and for each window, I added an area light with a pink-red color. And I put one blue-colored area light almost in front of Chara. 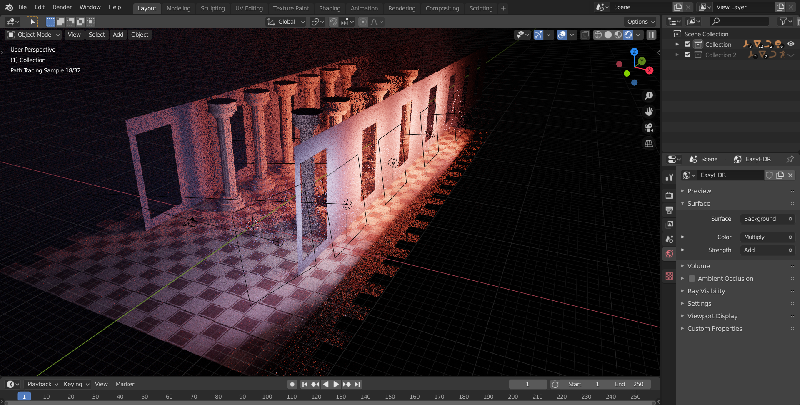 Because of the square hole, the area light hit the pillars and the ground, creating a nice shadow in the environment. The blue light was used to increase contrast with the background and to give Chara a deadly look.

I used the Cycle render engine for this one at 1920x1080p. I set it to 600 samples and used the Denoising node to clean the final render. 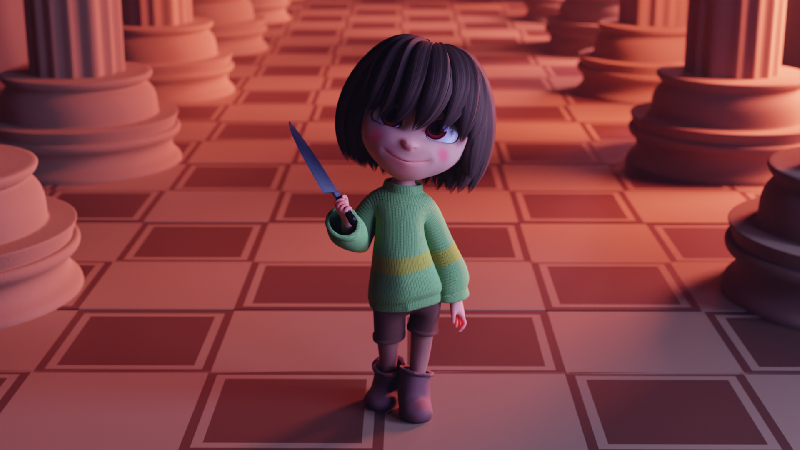 For the final touch, I used Photoshop to crop the image and correct the colors. I also used a dirt lens image and set it to 10% opacity. The final result: 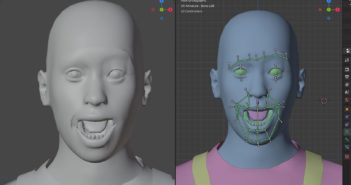 Next Article How to create a Face rig in Blender 2.83