Hello! My name is Richard Rabassa. I’m originally from New York (City) but moved south to the Carolinas quite a while ago. I’ve been a graphic designer for over 20 years, specifically with design and advertising agencies.

My interest in 3D design started the day I discovered Adobe Dimensions (originally released in 1992). It was very primitive by today's standards but I was fascinated by it. From there I moved on to Strata Studio Pro. After seeing Toy Story in 1995, I was hooked.

I picked up Blender back in 2009 on the recommendation of a fellow designer and began taking one tutorial after another. Today I use it for motion graphics, game assets, and illustrations such as this one.

This piece is inspired by my love of crazy character design and robots. Having young children, I tend to see many things through their eyes. If I create a character and they smile or giggle, then I know I’m onto something. The head was based on a sketch from CreatureBox and the rest was just a flow of ideas.

I really wanted to focus on mood through lighting and textures. I also wanted to use Blender exclusively as much as possible. I wanted to use procedural textures rather than external image maps and, with the exception of the wood grain on the stool, everything was created in Blender.

Why is He Smoking a Pipe?

So why the pipe? Well, I have a fascination with “Lateral Thinking”. What would you not expect a robot to be doing? What would make the viewer do a “second take” and tickle their mind? When creating these characters, I always try and keep this in mind. Here is another example: 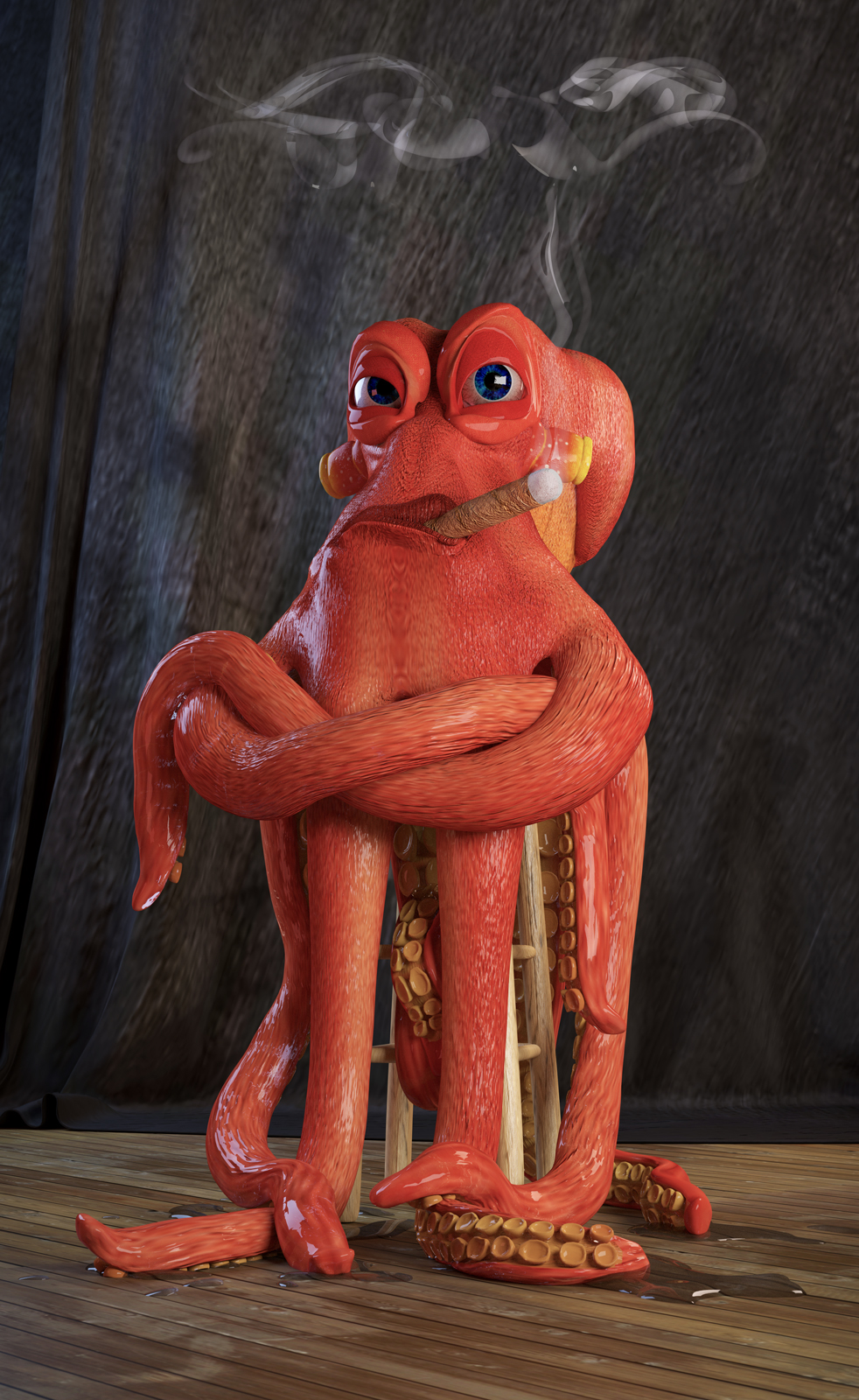 When creating characters like this, I always start with the face and head. Since this character is a robot, I did mostly box modeling. On other, more organic creatures, I start by blocking out the basic features of the face and then diving into sculpting; for example, this guy:

For me, the face always dictates the shape and structure of the body. In the case of the robot, the face projected a certain “lankiness” for the body. Extra-long legs and arms with a compact torso. 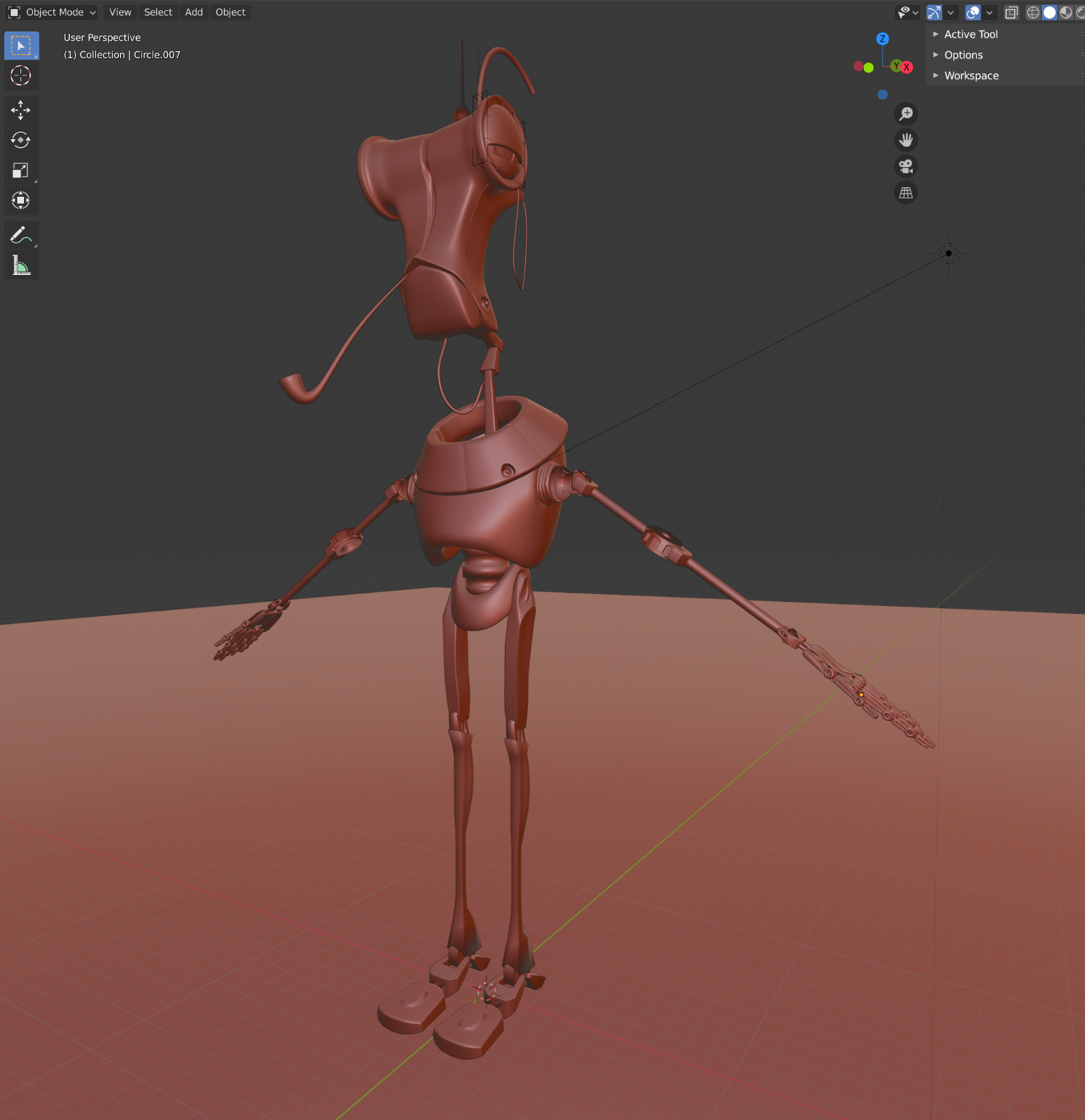 I also jump back and forth between EEVEE and Cycles throughout the entire process. I use EEVEE to get immediate feedback but cycles to check textures and lighting as I go.

For areas such as the body (in green), I used color ramps and RGB curves to create a fabric bump to try to simulate a weave. The smoke was the simplest of all. I created a Curve Path for the shape and Principled Volume shader for the texture. 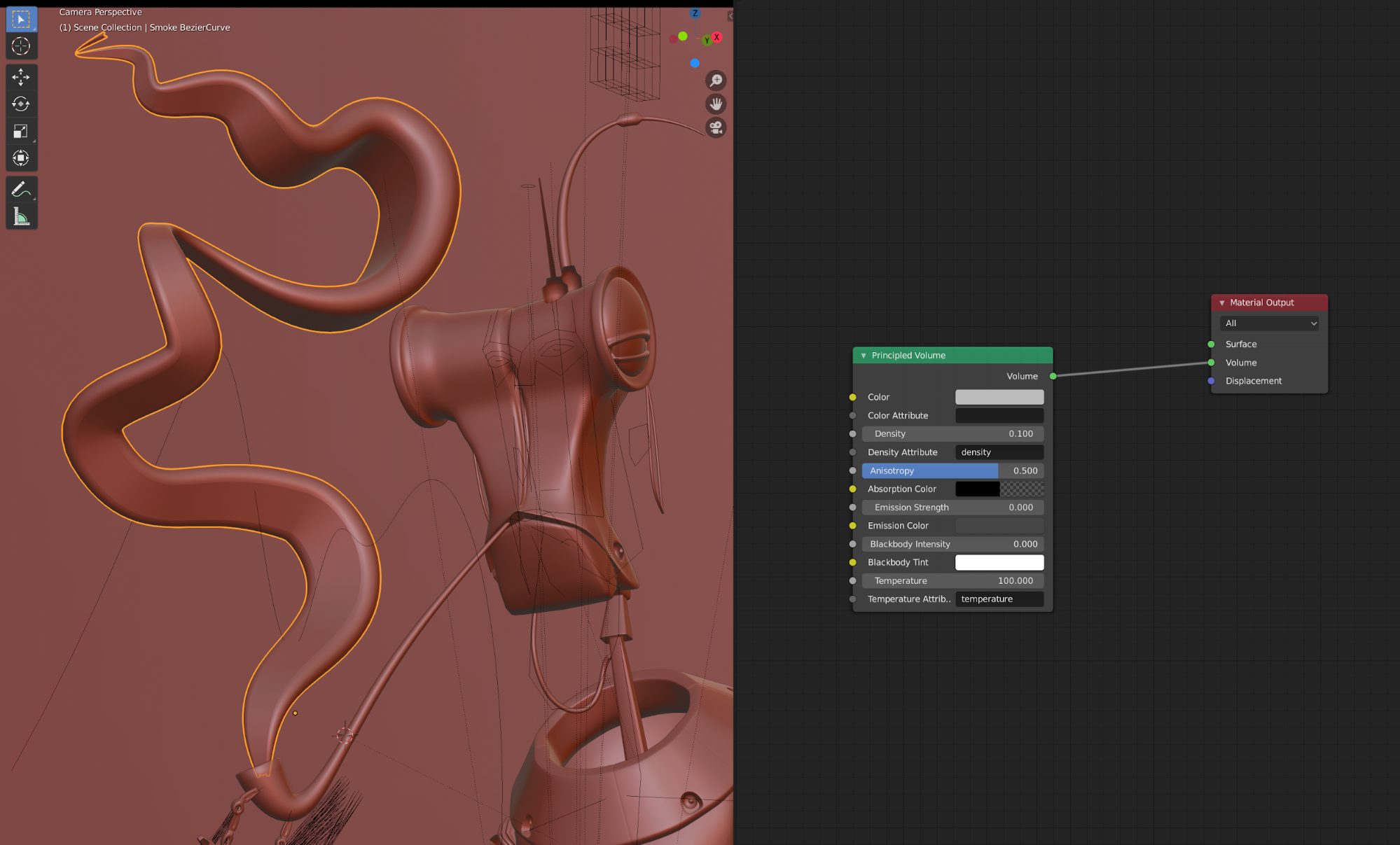 For the legs, arms, and collar, I used Dirty Vertices as the factor for mixing two shaders. I wanted to get a slightly worn look on all the metallic parts of the body and Dirty Vertices worked perfectly. 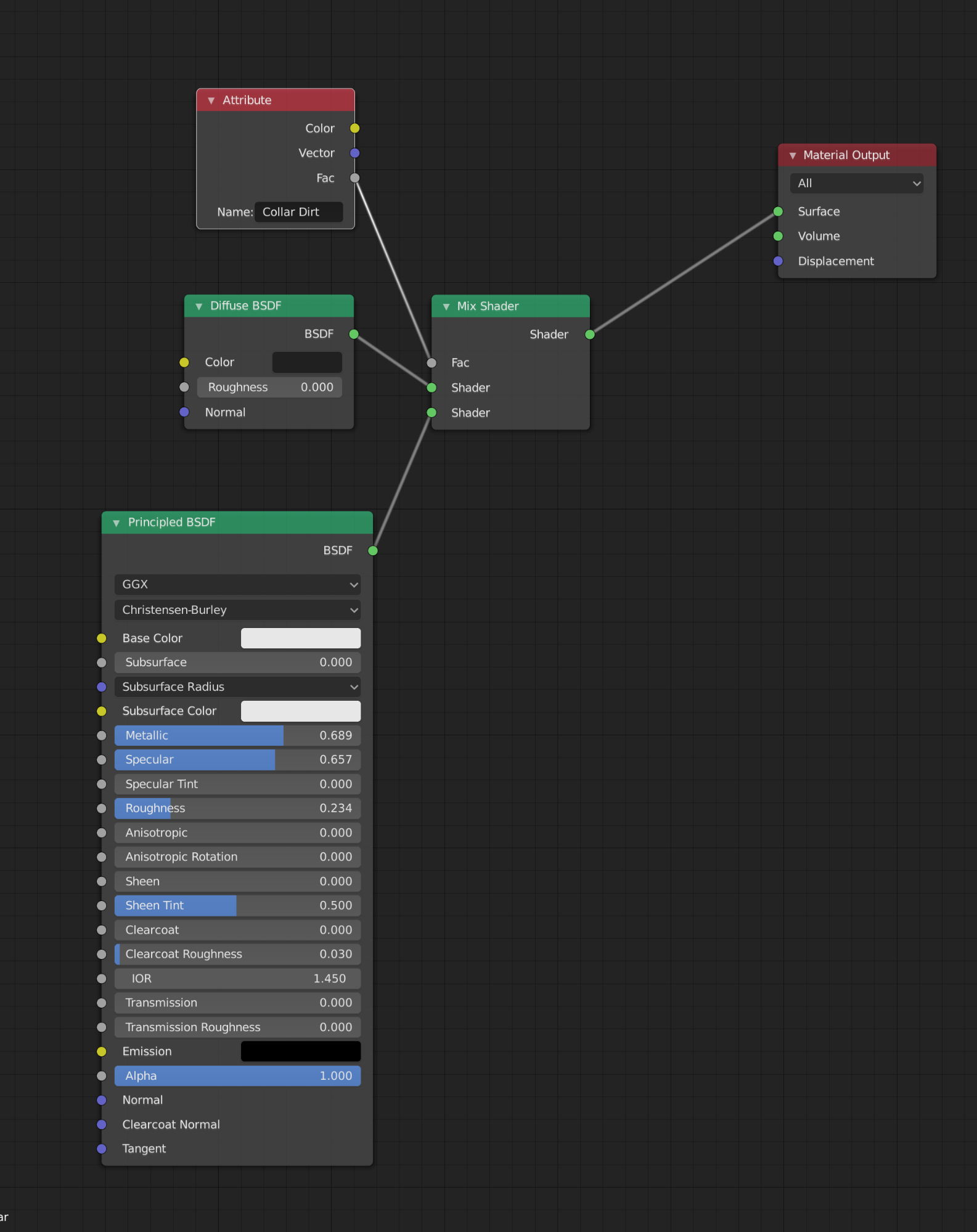 For the lighting, I used two spheres with Emission shaders on them. For the front light, I scaled the sphere to something really big but with a low emission strength. This helps in getting a very soft and even light across the entire scene. The back light is much smaller and about 4x stronger for the rim highlights. I’m sure there’s a better way to achieve this lighting using the actual light objects, but this was pretty easy to manage. 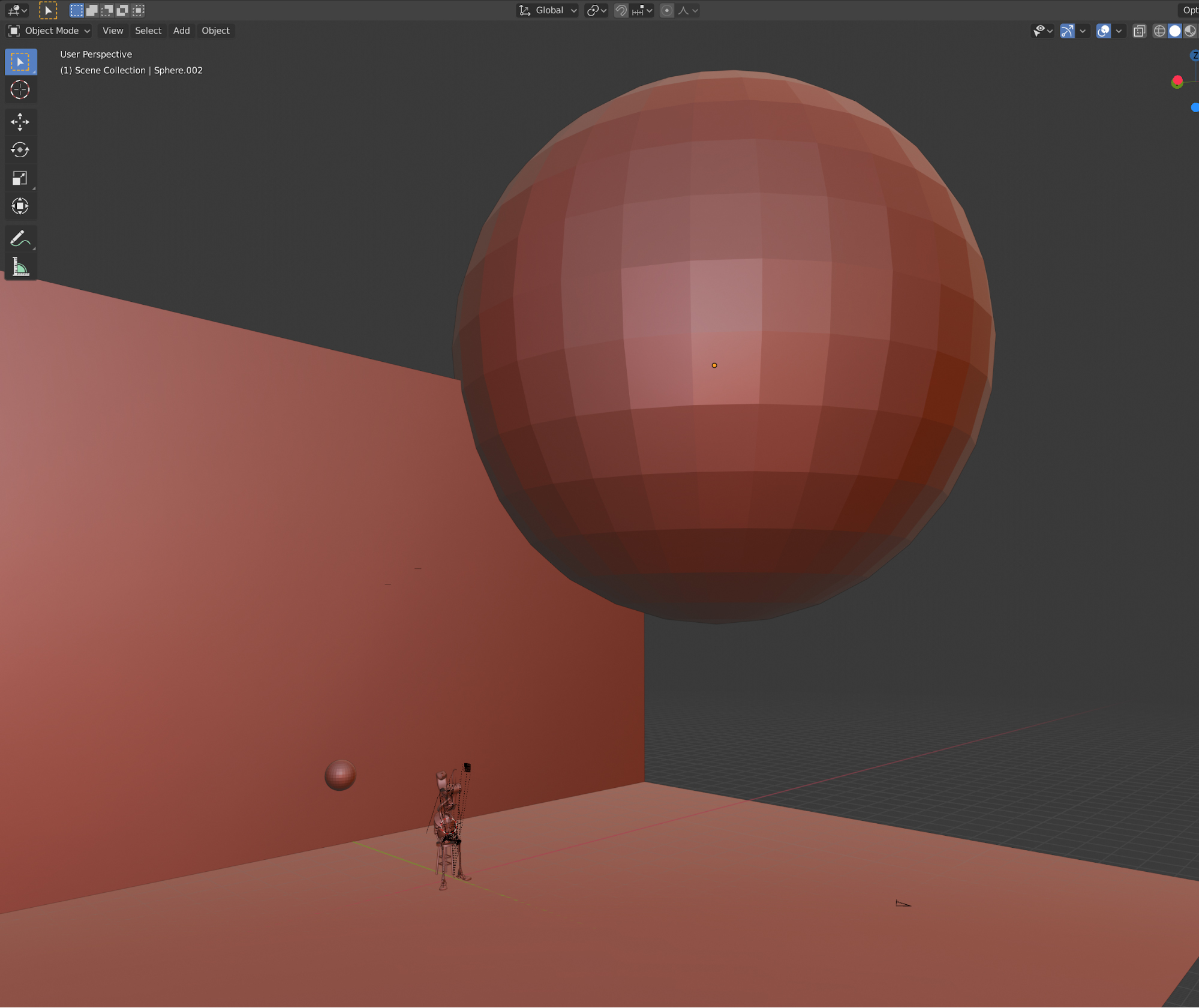 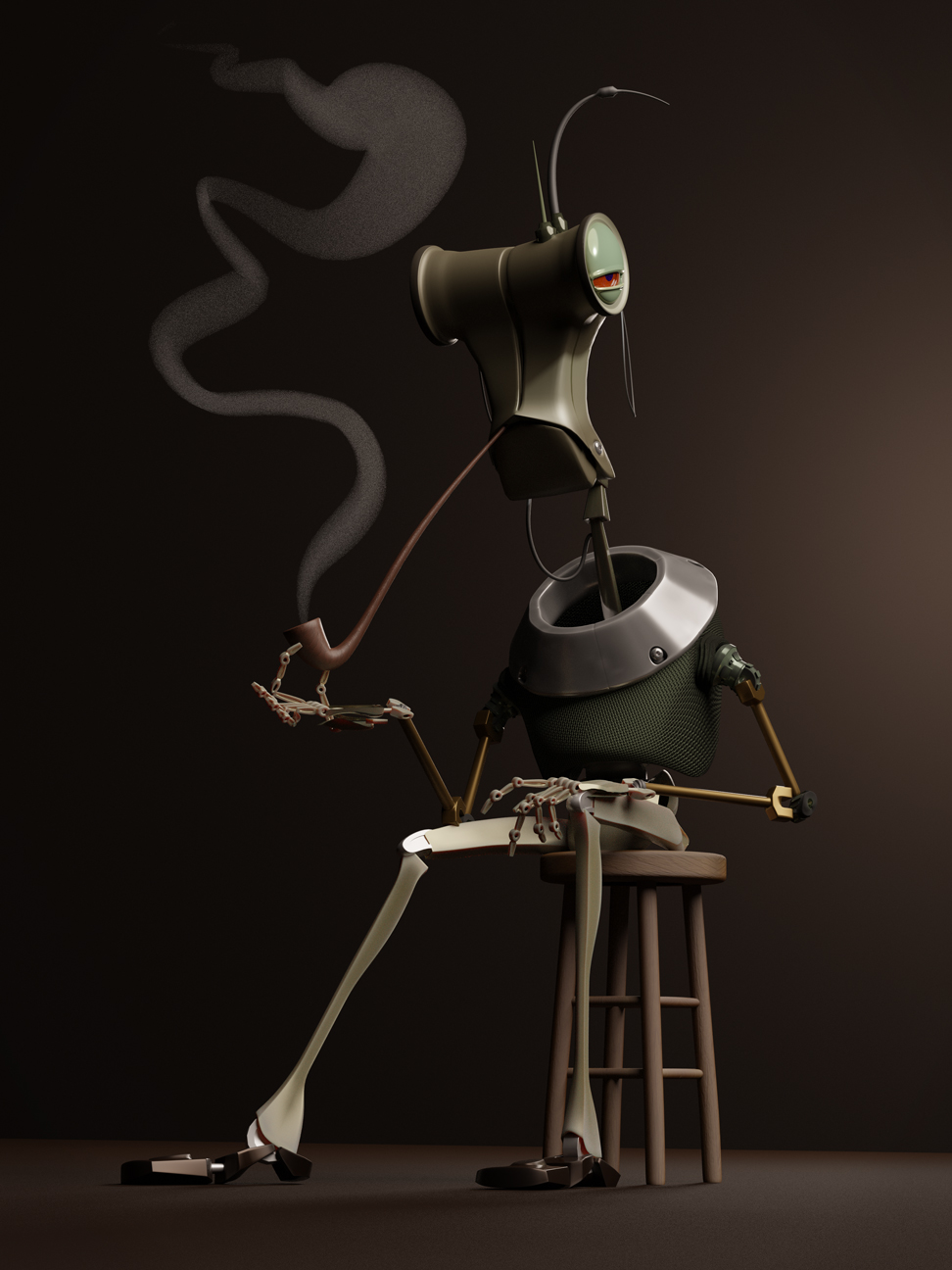 So to summarize, the most important part of all this is to have fun!

Richard Rabassa, Art, Life and Everything Else. 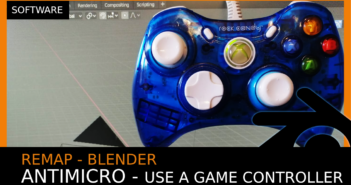 Previous ArticleANTIMICRO: Remap a game controller to fly/walk in Blender 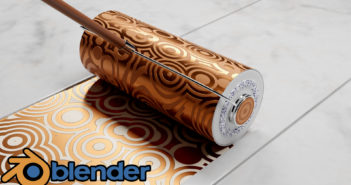