I am Dedouze, that’s my artist name but you can call me Andry. I am a self-taught illustrator and animator. Alongside my full-time job as a web developer, I was doing art as a hobby, which included many mediums—from acrylic painting to 3D modeling and animation. The art hobby started to take more and more of my free time and I began to get nice feedback on my social networks. When I even got contacted by professionals in French TV and movies for short projects, I started to believe I could do this professionally. I really liked my job as a web developer, but I really wanted to develop my art and try to bring something new that would inspire other artists.

So now I am a freelance illustrator, and I'm trying to focus most of my time on my own projects and universe, hoping I can make a living out of it someday. I am now based in Paris, where I live in a very small apartment because I don’t yet make a lot of revenue from my new art activity. But I hope to have a big studio of my own someday ahah.

My first take on 3D was in 3DS Max where I did some pieces of animation when I was in high school. That was not part of my studies, though—it was also a hobby back then. I discovered early versions of Blender, but at that time the software was so confusing to me, and I didn’t try to learn more. The reason I gave it a new try was because of the Blender team’s “Hero” movie trailer that teased about the new features of Grease Pencil, with mixed 2D and 3D animations in the same scenes. As a big fan of both traditional art and 3D, I was so excited. So I started to test it while it was still in development. Thanks to my background as a web developer, I could download the sources and build it on my computer and start drawing with Grease Pencil!

Besides making paintings and short animations, I like telling stories inspired by my own life to make fun of sad or annoying situations I witnessed or lived. So, I had already made some comics before, but not animated.

And because I like animation and creating my own music, too, I thought it would be nice to make something between comic and animation and put some background music on it. I discovered the concept of animated comics on YouTube, and I really liked it, so I decided to try this format for my next webcomic.

For my art style, I am really inspired by both manga style and old French comic style, so I think that is why my characters have these round faces, big eyes, and flashy colors. 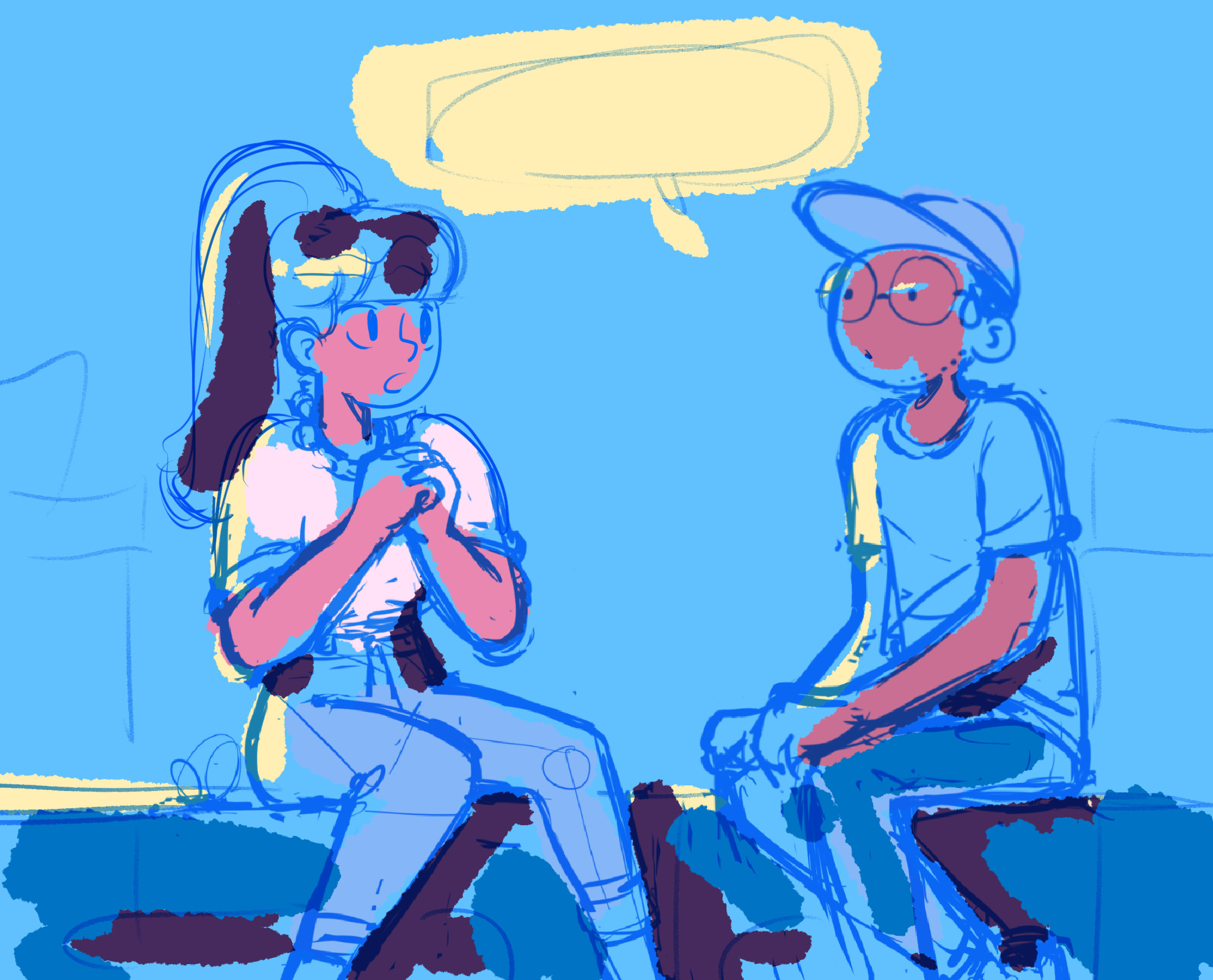 I start the drawing in 2D. I use Clip Studio Paint for that. It could be done in Blender, but my computer is too slow, and I need to sketch with very fast strokes to feel like I am drawing on paper. I also experiment a lot with colors and composition, so the first sketch is really faster for me in 2D. The draft doesn’t need to be really accurate. Actually, I never completely respect my drafts, I just use them to have an idea of the proportions, composition, and color palette. 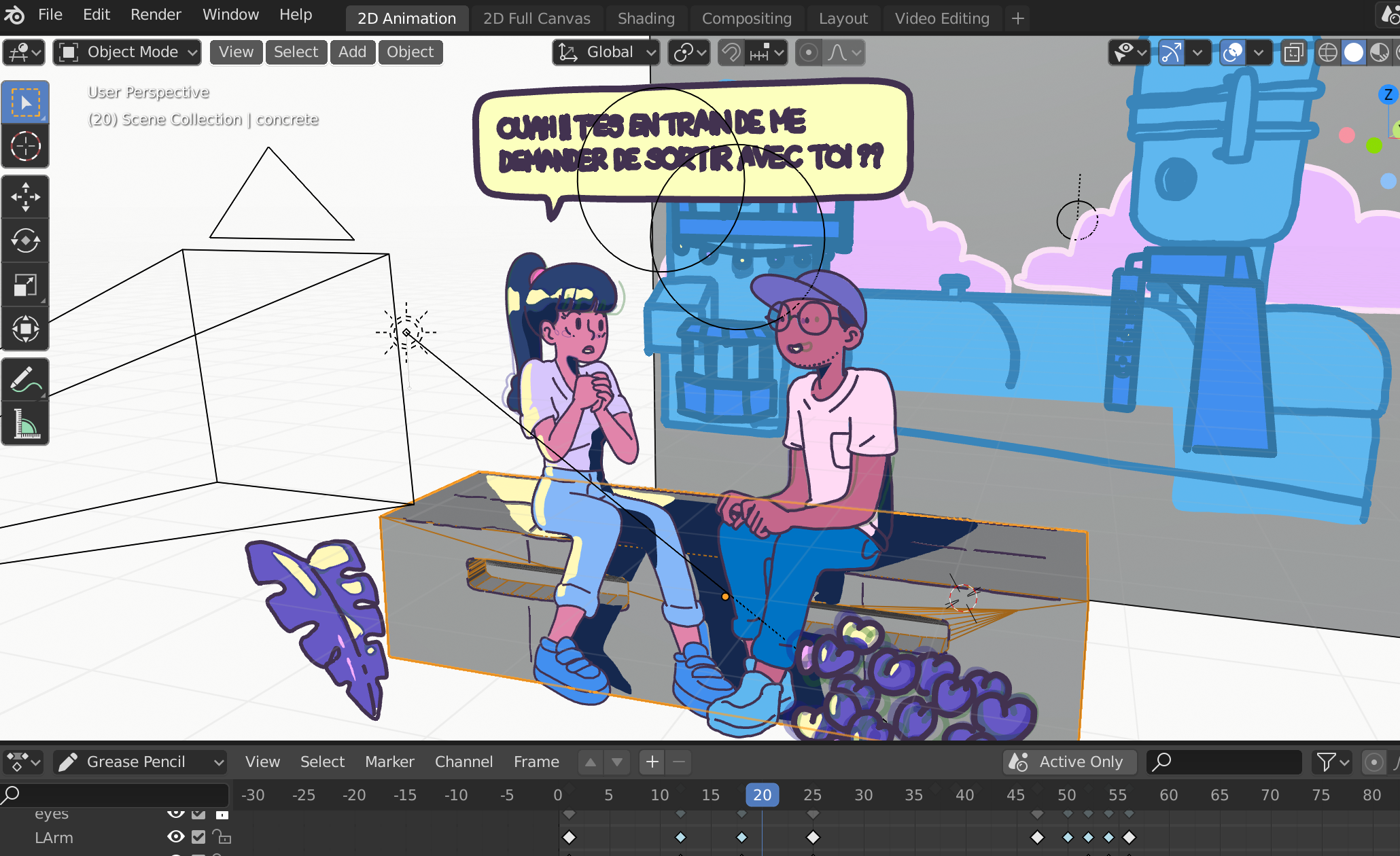 Then, I import the image as background for the active camera in Blender, and I start redrawing the scene properly with Grease Pencil.

The modeling part is very basic, I mostly use primitives and just draw the extra parts over it with Grease Pencil. In this case, there is only a cube and a plane!

The animation is the most fun part for me. With Grease Pencil, I could make traditional 2D animation, drawn frame by frame, mixed with auto-tweened frames for some parts. I think it’s better to mix both, and not try to make a completely smooth perfect animation for the whole scene, because it would lose the charm of retro animation. 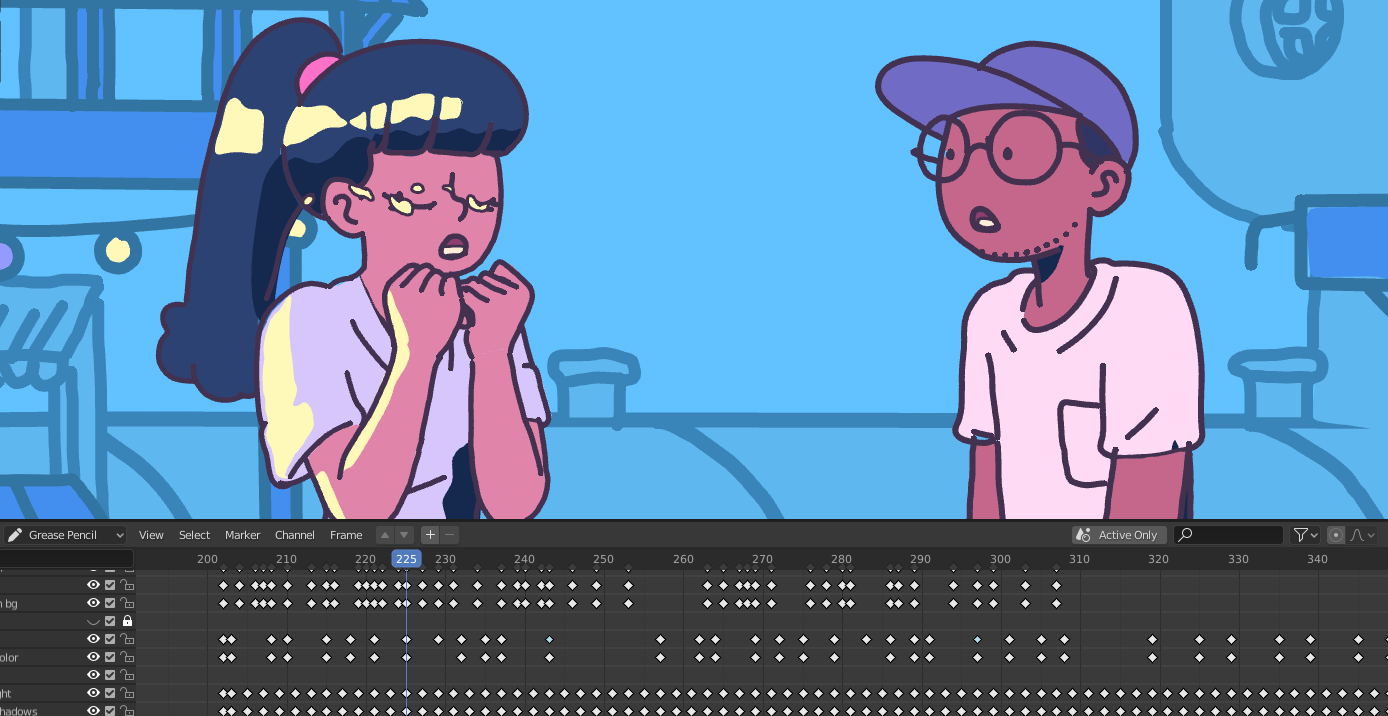 So, there are moments where the characters jump from one pose to another, and some moments where they move smoothly. See in the gif below, I use tweening for moving the girl’s arms up to her face, and then, I just cut to another keyframe when she opens her hands.

You can notice in old 2D animations that the lineart ink sometimes smears on the colors. I tried to recreate this effect in the compositor by extracting the lineart color (the darkest color, in this case) and adding a blur filter on it, then adding it again over the final image. I also used the lens distortion noise to make a very subtle chromatic aberration effect on the borders, to recreate the look of old anime.

I also use the compositor to separate the texts in the bubbles, so that they did not get the exact same effect as the animation. There is no standard rule for this actually, because obviously there is no text in bubbles for anime, so I had to find myself the best way to display it without losing the retro look. 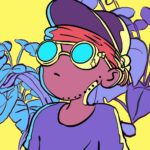 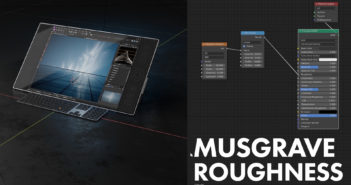 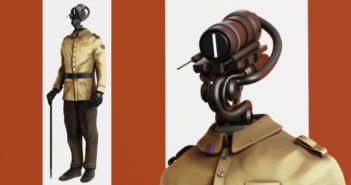 Next Article Creating a Character Concept in Blender (Timelapse / Commentary)