‘Wolf At The Door’ is my visual interpretation of the great siege of Stirling Castle in 1304 - one of a chain of events that began the long campaign for control of Scotland and the Wars of Scottish Independence. With the aid of a digital 3D model produced entirely in the Blender 3D software, some historical advice and a little imagination, I have attempted to reconstruct how Stirling castle might have looked at the time of the assault by King Edward I’s army. Central to his strategy was his mighty war machine, Warwolf, which was a giant trebuchet considered to have been the largest ever built for use in medieval siege warfare. I have posted a little more information about this project on my website where you can also watch a short video with a sequence of fly-through animations of my Blender 3D digital model showing how this enormous scene was put together. 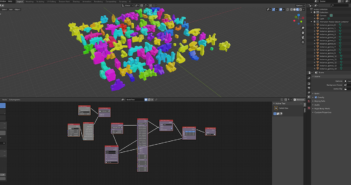