Hello everyone. First, thank you very much for this opportunity to share a little of my experience and my art. My name is Alexandro Castro and I have been a 3D artist since 2002 when I started making TV commercials as a generalist in Manaus, Amazonas, Brazil. At the time, I was the first professional animator in the city and, due to the lack of professional partners, I had to learn a little of everything and do all the work. My big dream at that time was to focus on animation.

Since I had always been in love with storytelling and the advertising jobs I was doing didn't necessarily give me the opportunity I was chasing, I decided to make some animated short films and thus realize my dream of storytelling. So I made two short feature animations, winning some awards, and left a much larger project, which I still dream of finishing one day, incomplete.

Over the years I moved to a game studio where I could finally devote myself to dedicated animation, but the interactivity of the games and the characteristics of the animations developed for this environment were not necessarily what I had in mind. And so, after five years animating for various titles, I finally abandoned this media.

By that time I had been a Blender 3D user for about a decade, and I always loved all the possibilities that the tool offers us to develop an entire pipeline within a unique environment. Also, excited about all the enhancements brought into Blender 2.8 and the incredible implementations that the Pablo Dobarro team had been getting, I decided to test the sculpt tools of the latest Blender release. At that same time I began to fall in love with collectible statues and realized in them a new art form and storytelling through a single static shape. That's how I plunged headlong into the world of digital sculptures and have been focusing all my energy on it for the past few months.

Where The Idea Came From

The best way to make good art is by working on something you know that is part of you in some way, which is why so many artists make art based on elements of their childhood. My case is not different, and I've been studying ways to improve my art using characters that have marked my life. One of these characters is Venger from the Dungeons and Dragons TV animated show.

For those who don't remember, Venger is the antagonist of the 80's animated series based on the RPG Dungeons and Dragons. His goal was to get the weapons of power that belonged to the heroes of the show, and for a few moments he even had them in hand until he lost them again. Obviously, the moments when he had them in his hands represent the ultimate danger of the adventure, and it was one of those moments that I wanted to portray.

Since in my work Venger is in possession of the weapons of power in a static work, there is no way of knowing if he holds them only temporarily or if he really won and possibly killed the heroes. Thus the work takes on a dramatic and dangerous representation and that is why I made the decision to make this pose.

My main goal was to develop my technique and explore the limits of Blender tools, so I didn't want to start from base meshes at any time. Each element in the scene was made from scratch from a sphere; this way each new element becomes a new exercise. And everything from sculpture to textures, lights and renderings was done only in Blender 2.8. 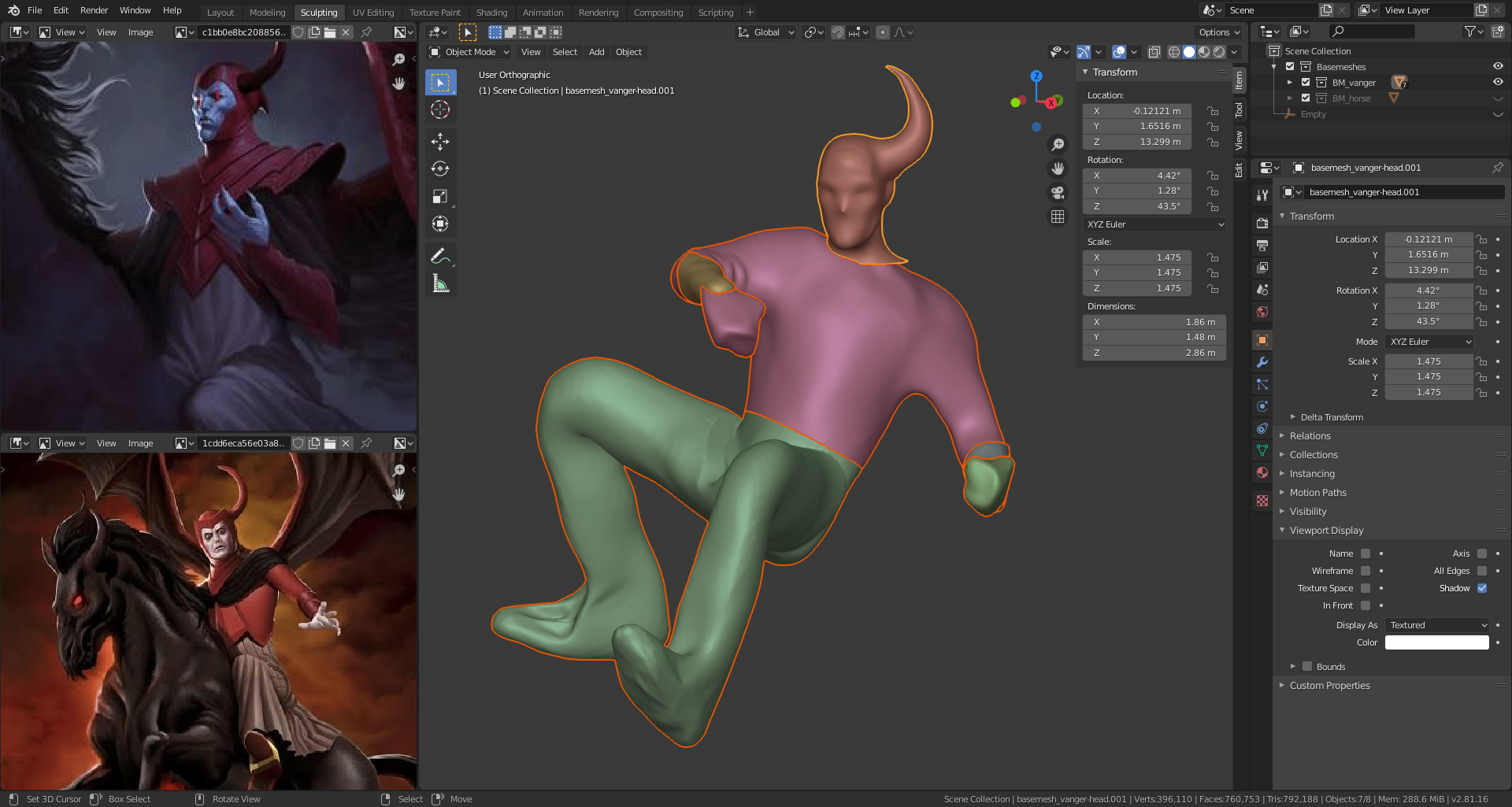 To pose the characters I performed a different technique that can be useful in many future projects. Rather than modeling the characters into a neutral pose and posing later, I blocked separate body parts already in the final pose. To have a symmetrical effect, each blocked piece was actually a mirror instance of each other, so every detail carved into one arm or hand was automatically reflected on the opposite side. In the end, I combined all the elements with booleans and adjusted the details. It is definitely a valid technique that I can use again many times in the future. 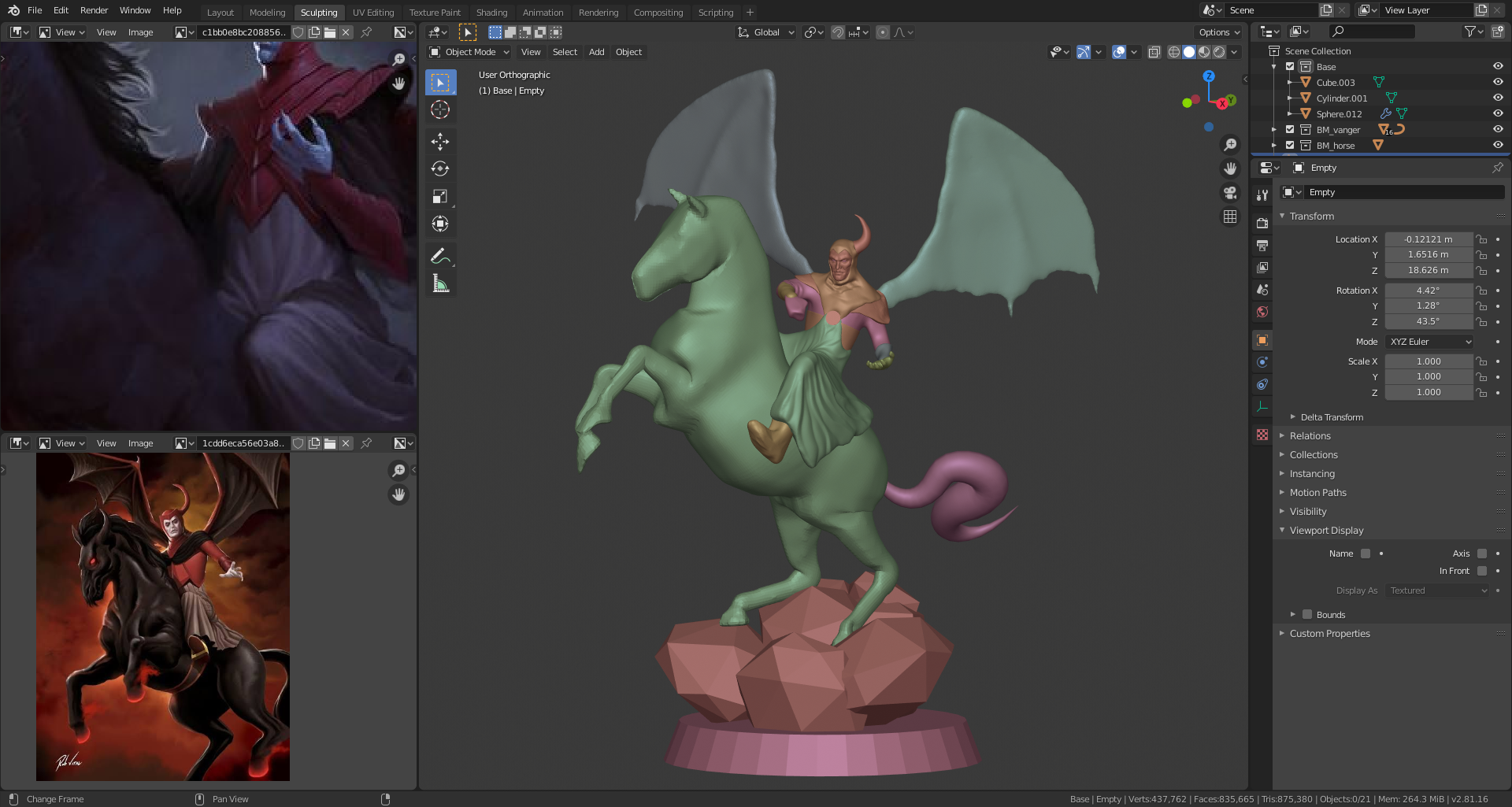 Vertex Paint in Blender is the closest workaround to ZBrush Polypaint, and the Blender Foundation package does a decent job, but it still doesn't compare with Pixologic. In very dense meshes, the painting of vertices is slow.

In low density sculpted meshes, using the Multiresolution modifier has another drawback. You may have many subdivision levels and a very dense model, but vertex painting uses the lowest subdivision level, which limits us to useless resolution in most cases. 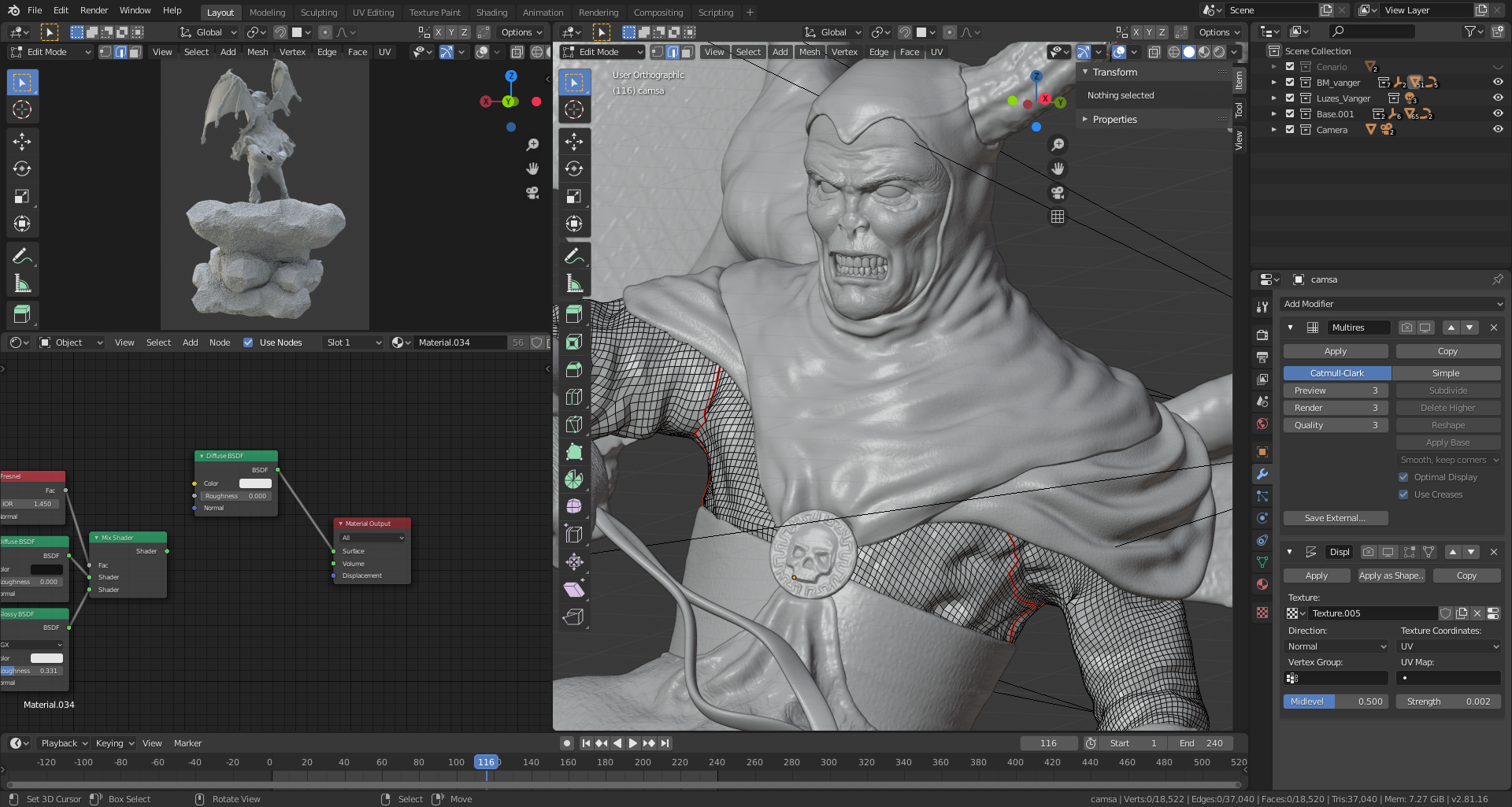 Because I wanted to test different workflows on this project and had used a low-poly mesh with a Multiresolution modifier applied with multiple subdivision levels, I encountered the problem of vertex paint resolution. I had to solve the problem by painting textures this way after unwrapping UVs on each element of the scene.

One of the most fantastic things about Blender 2.8 is the ability to render using EEVEE without even having to decimate the model. This allows us to create lights in the viewport and render the finished image with occlusion, reflections, bloom, DOF and one-click shader adjustments, without having to export everything separately to compose later in editing software, as is usually the case with editing.
EEVEE even makes it easy for us to create realistic turntable renders and takes, exploring close-ups and important details of our models, without the need for decimation. 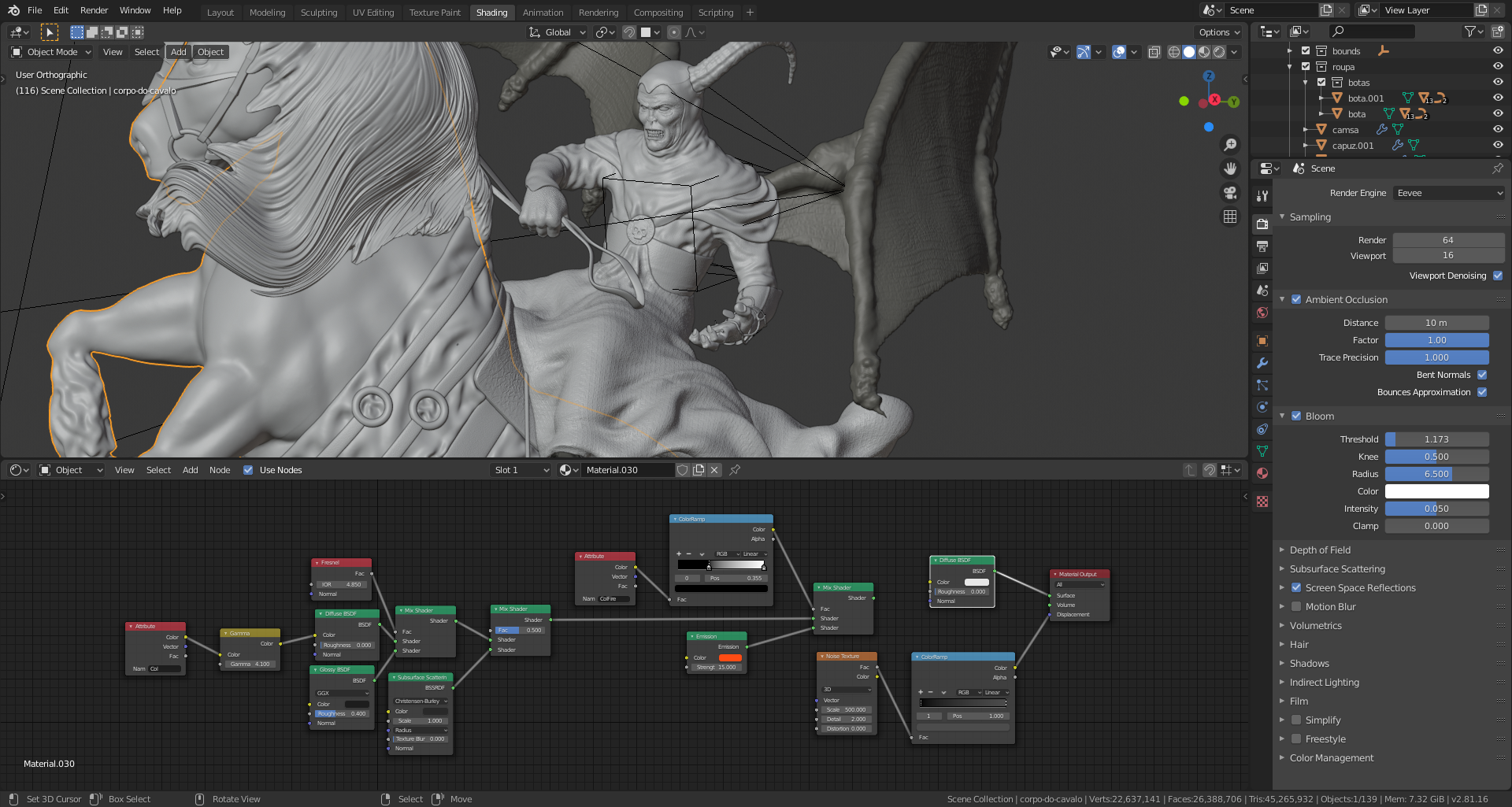 Although all post-production is welcome, I am happy to say that this step was hardly needed here. The end result of rendering with EEVEE is so positive that there is really no need for extra compositing passes. Obviously, post-production is very personal for every artist and you are free to add details as you like, but I don't particularly like to make additions to a still image that don't match the details that already exist in my models. Once again, this is totally unique to each artist

A Little About Limits

Much about Blender's capabilities and limits has been learned in this project. I sculpted using Dyntopo in the early stages and then made use of voxel remesher so I could compare how the two surfaces behave. In the final step of detail I projected the denser mesh into a low-poly mesh (also created from remesher) using the shrinkwrap and multi-resolution modifiers. Much of this workflow has been really rewarding, and I've been tweaking it on newer projects. It is interesting to note that the same model sculpted with Dyntopo has a different file size when it is sculpted with voxel remesher or reprojected with shrinkwrap and multiresolution, the latter being the smallest file (about one third the size of the others, but with some loss of brush performance when sculpting).

At the moment I work with an old PC with only 8GB RAM and very soon I intend to upgrade completely to 32GB RAM or even 64GM RAM, but the interesting thing is that this hardware limitation has forced me to be creative in the process and really measure the best use of available resources. In the end, it all became a huge learning experience. 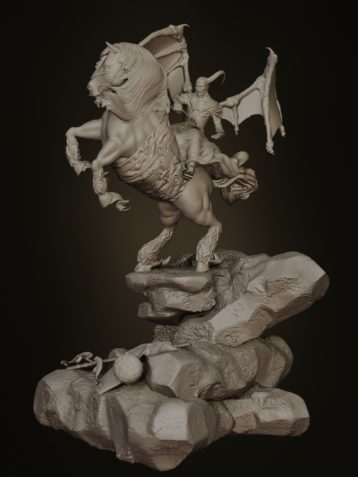 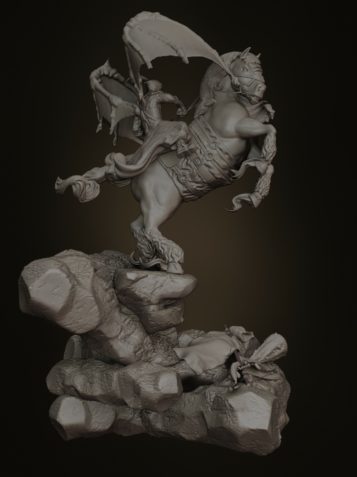 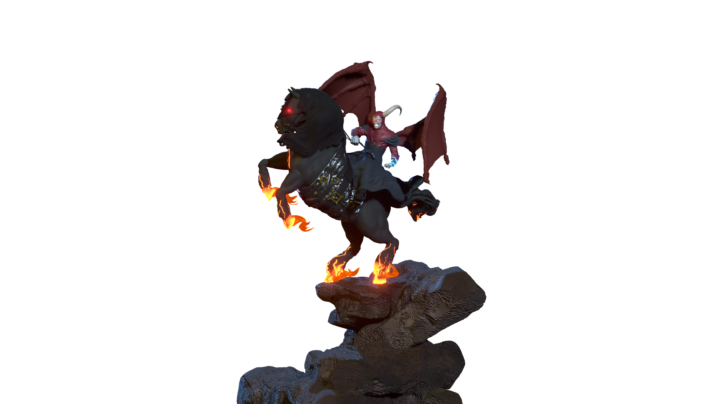 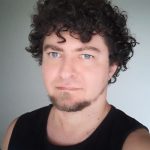 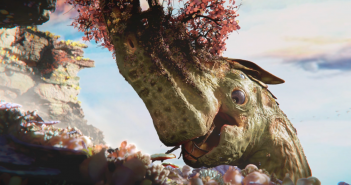 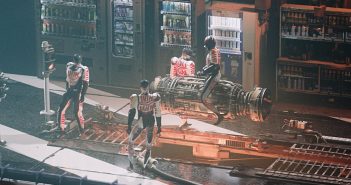