Open-source Blender integration for the high-end crowd simulation tool to ship next year.

Next Gen creator Tangent Animation has partnered with software developer Toolchefs to develop a new Blender version of Atoms Crowd, Toolchefs' high-end crowd simulation software for visual effects and feature animation work. The new Blender integration, which Tangent is using in production, will be open source, and is currently due for release in "late 2020".

Some of the features currently available in Atoms Crowd, Toolchefs' high-end crowd simulation tool. An open-source Blender integration, being co-developed by Tangent Animation, will be available next year.


Although there are already third-party crowd simulation tools available for Blender, like CrowdMaster and CrowdSim3D, Atoms Crowd is a pretty powerful – and production-proven – product.

The software, which integrates with a range of high-end commercial 3D applications, including Maya, Houdini, Katana and Clarisse iFX, is used in production by a number of major visual effects studios, including Emmy Award-winners Cinesite and Base FX.

It's a skeleton-based system – unlike some crowd tools, it doesn't use particles to drive the movements of characters – and it's purely artist-driven: it doesn't use AI to generate crowd behaviour.

Although Atoms Crowd is already free if you're using it on a non-commercial project, or if you earn under $30,000/year, none of the existing integrations are open-source: something that will change with the release of the Blender version next year.

It's being developed in partnership with Tangent Animation, best known for its work on Netflix animated feature Next Gen, and now at work on Maya and the Three, The Book of Life director Jorge Gutiérrez's epic six-part animated series, on which it is using both Blender and Atoms Crowd in production.

"On Next Gen, crowds were a major part of production, but were not without a lot of issues," said Charles Wardlaw, Tangent Animation's Crowds Lead on the movie. "For our current project, we wanted to streamline the process inside Blender. The simulations are so fast that we don't need to cache before making decisions any more!"

The Blender integration for Atoms Crowd is due for release in "late 2020". It will be open source. 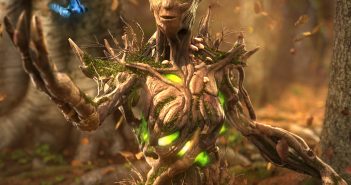