Hi, I'm Nishant Neeraj Agnihotri, I'm from India, I have been a self-taught CG Generalist for 4 years. I'm also a civil engineer, passionate about science, and during the culmination stage of my engineering I came to know about 3D designing. After that my entire life changed! I worked as a house planner and Interior-Exterior Archviz designer in the industry for three years after I completed my engineering studies, but in May 2018 I joined the Blender community and met with plenty of new artists and recognized how big this world of art is. Since May 2018 I'm now 24x7 CG generalist, working on myself every single day to be a better artist, learning skills, practicing, studying about art; it's like a freestyle study and I enjoy it. So, since May 2018 I moved on to become an artist, a sci-fi artist. I would love to work on any sci-fi movie and game if I ever get the chance! But before that I need practice and to study plenty of things. So I made this portfolio.

The entire portfolio has been made since May 2018 as a result of study, practice, and speed. Hard work is the only key to success with smartness!

I have been a hardcore fan of Hollywood since childhood. I love adventure stories, that include action, thrills, a little bit of mystery and the fighting spirit. I love suits and armor, tactical units, and high tech smart gadgets. I think that is why I am also an engineer in the first place. In 2008 Marvel made a serious impact on me with Ironman. Damn that Mark-3 armor! I’m a big fan of Tony Stark. I love epicness and cinematics with epic orchestral music. So, recently I was playing Halo. Last year I was pretty busy honing my skills, but this year I had resolved to work but also live a little, too. So when I was playing as Master Chief I felt that adventure, thriller, mystery and definitely soldier spirit! Really I also loved the story of Halo! So I thought Master Chief could be my first sci-fi character to practice becoming a sci-fi artist! So there is nothing about me that does not come from the heart!

Well, here starts the fun part. Whenever it comes to modeling sessions, I have always jumped from small stuff directly to big models. The basics are the same: all modeling requires is strong will of effort and dedication.

Found some references for the exosuit below the armor. Then I used one anatomy model with the same scale to reference. I made a few tweaks to the model to adjust it perfectly onto that soldier's body because generally a soldier’s physical strength and muscle tone are more extreme than civilians. 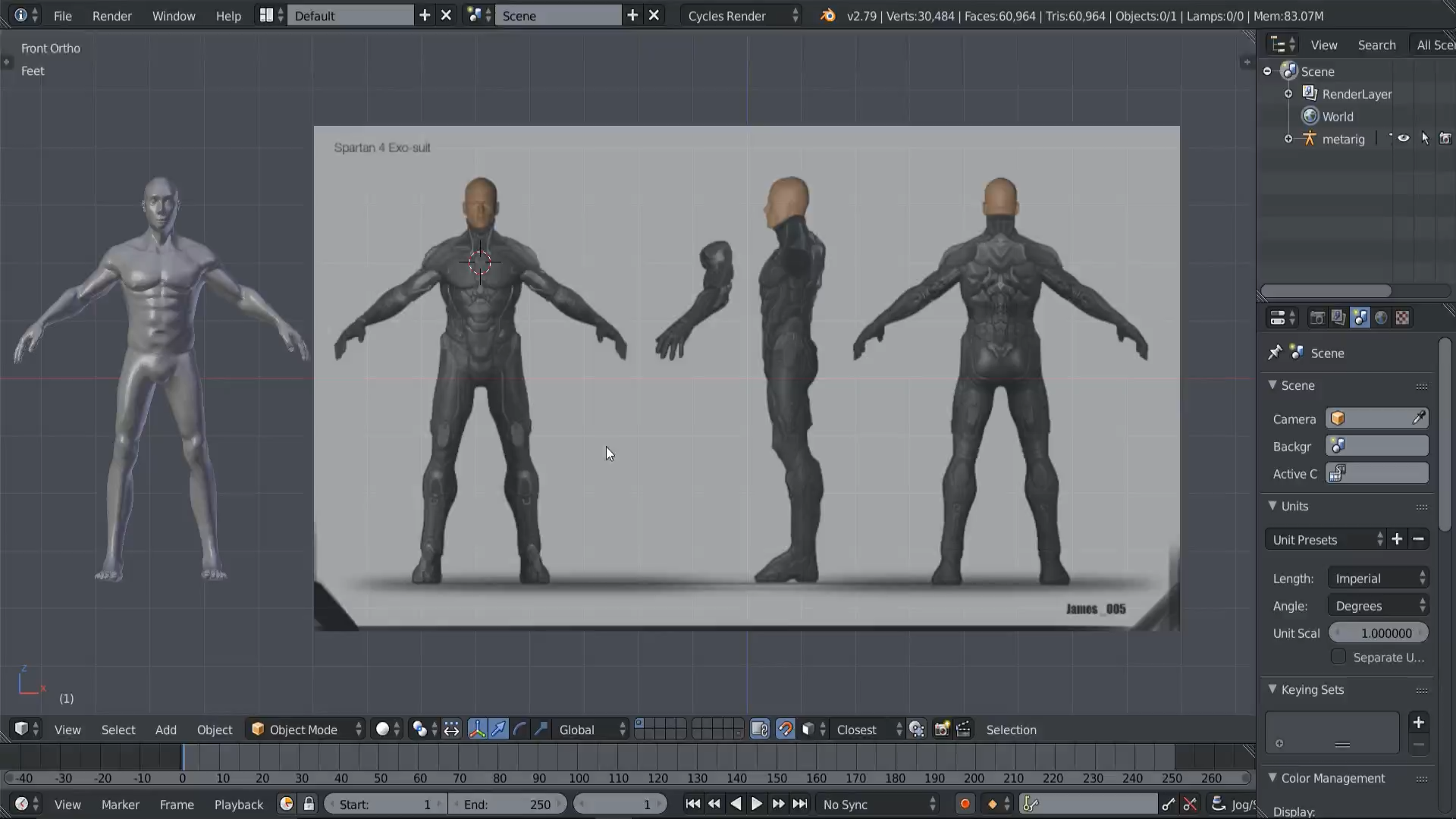 Then I simply started to build the exosuit pieces one by one just exactly interpreted over the reference, but being mindful of human male anatomy. 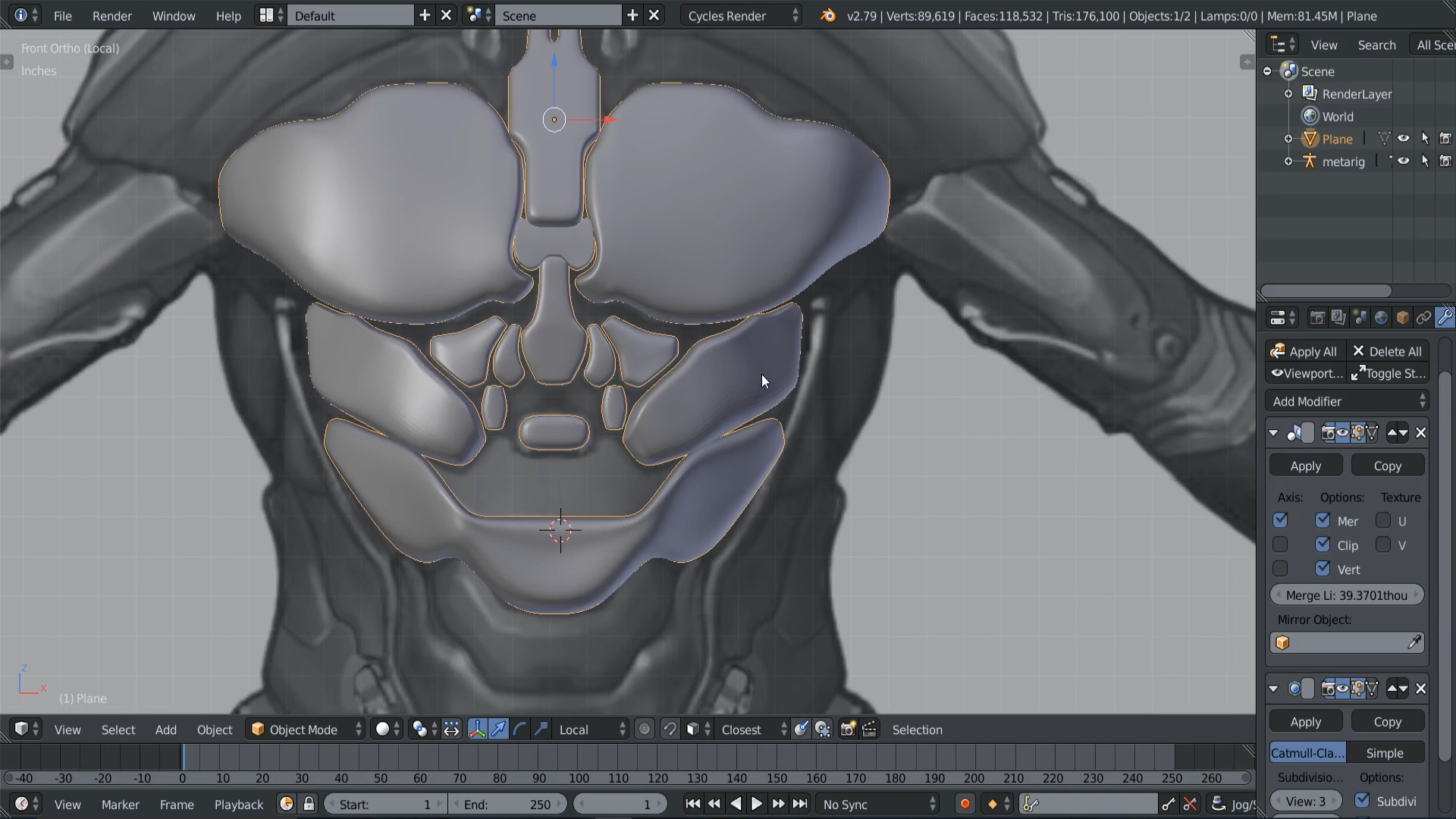 I used sculpting and mesh snapping methods to hash out curvature problems on places like the legs.

I had plenty of references to mark the details on sculpt mesh and then trace them easily. 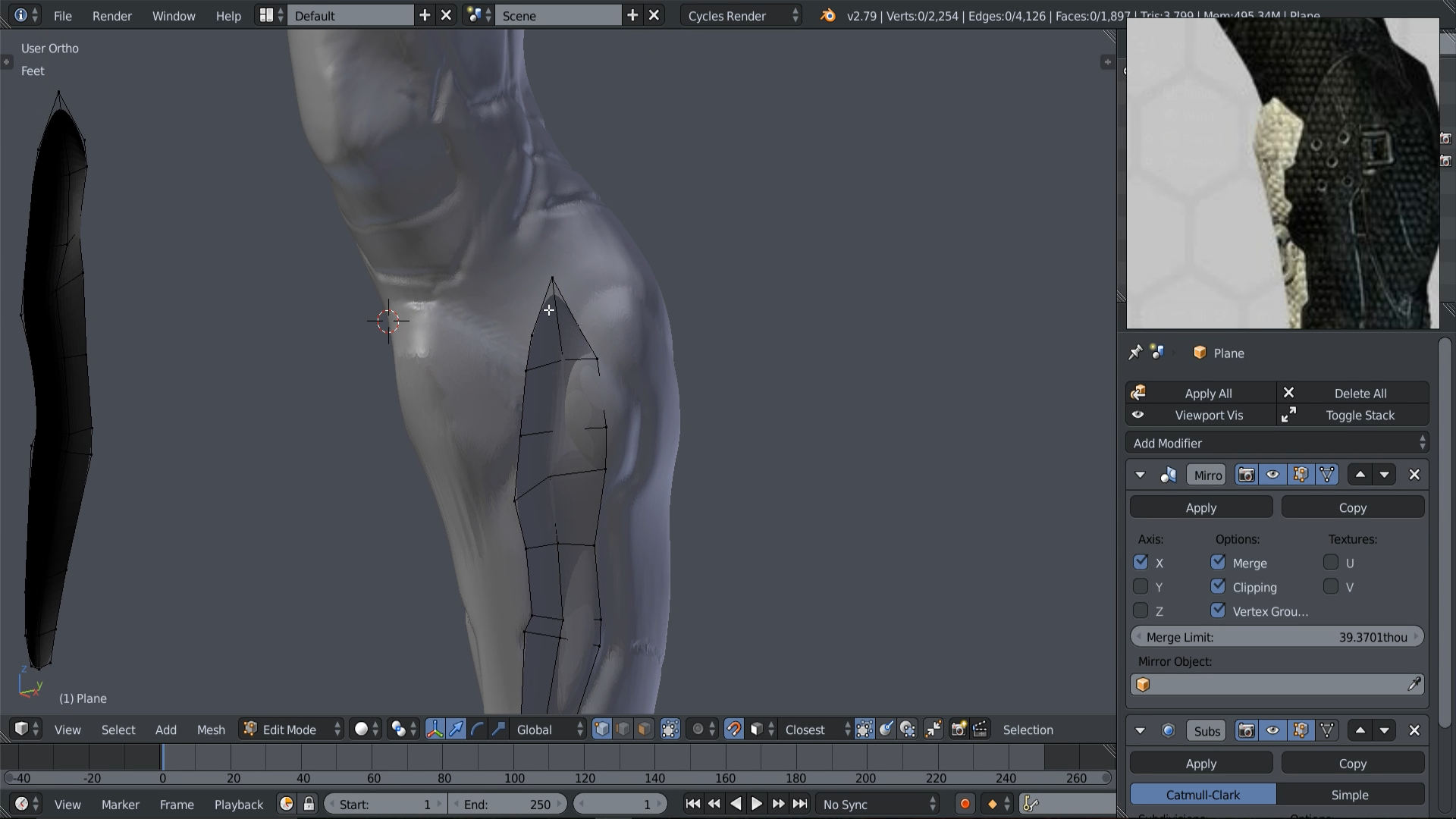 So after completing the exosuit modeling, the results looked pretty interesting:

As with the exosuit, I found plenty of references of Master Chief and then started building them one by one!

Modeling the assault rifle was quite a challenge; it had plenty of small details and I spent two days modeling it, but I'm completely satisfied with this model. As the saying goes, the devil is in the details!

When I modeled Master Chief first, it was in a T-pose as given in references.

I already had a pose in mind: a soldier holding their rifle upwards with their right arm! But the real challenge was how to get a high poly model into a pose!

I searched a lot on how to get a high poly character into pose without making a low-poly, retopologized model just for posing. Going for low poly could be time consuming and I cannot sell the model later due to copyright! So!

So I dismantled my model’s arms, got the gun at the right angle and exactly the arms behind it. I marked the elbow as the origin of my right arm setting. And after that I re-adjusted the arm piece by piece to finally achieve the pose I wanted.

It wasn't easy to adjust the arm that way but there was no other way. Then I worked on hand and fingers to give a cool loose grip, as it looks a bit like a cool soldier!

So here is the entire pose without the rifle: 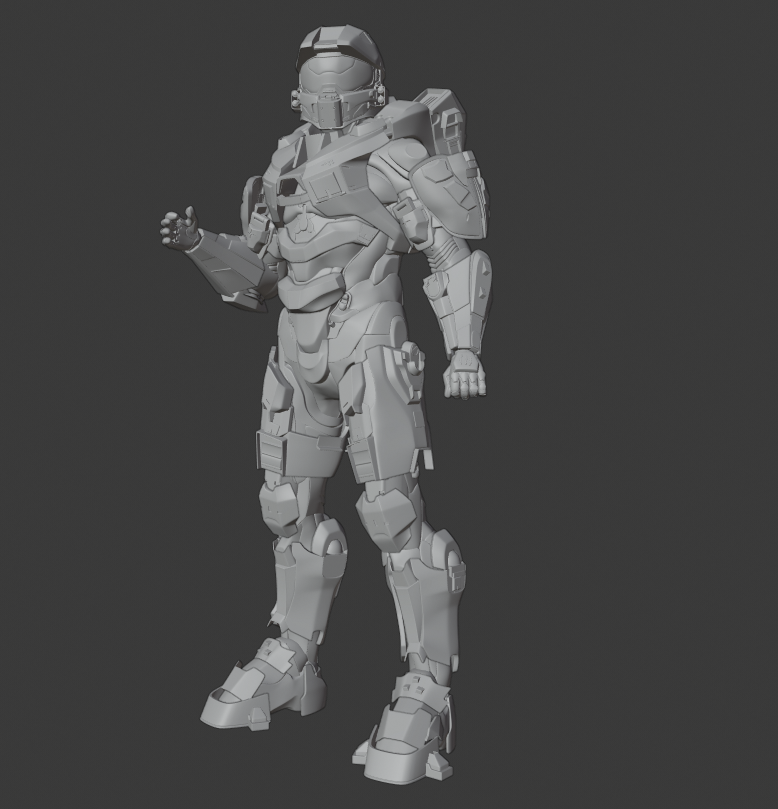 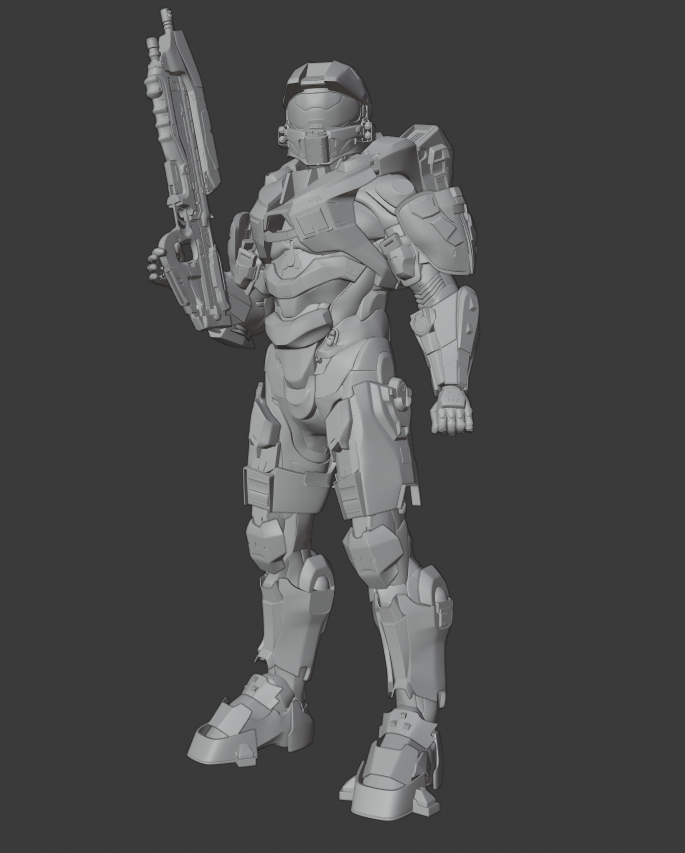 The texturing was done in Substance Painter. I added those tiniest details which I have seen in Halo trailers, games, other artworks. PBR textures! 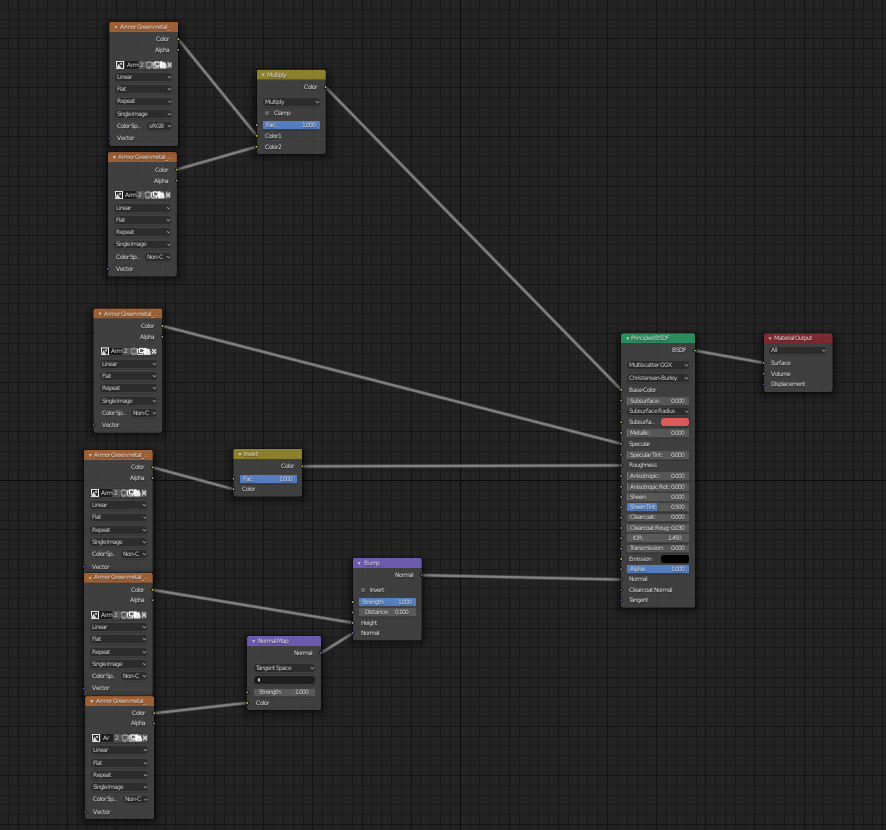 So, it's all about my adventure of modeling Master Chief and Stepping up towards my goal!

Check out the entire model on Sketchfab:

MASTER CHIEF by Nishant_Neeraj on Sketchfab 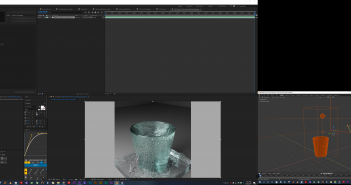 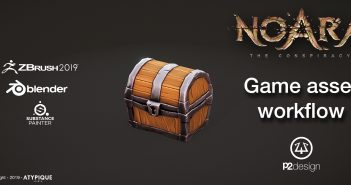