A few weeks ago, before I started working on “Nice Place to Live” I was working with a client that heavily critiqued my work. It's funny to say that, since I had been improving my online image for several months before that… But you can't run from an ugly truth; my renderings did need improvement.

And that's how I came up with these images I present to you now. “Nice Place to Live” was a project in which I decided to push my limits as a 3D artist, using all of my skills and my time to achieve the best result I could - at least so far. 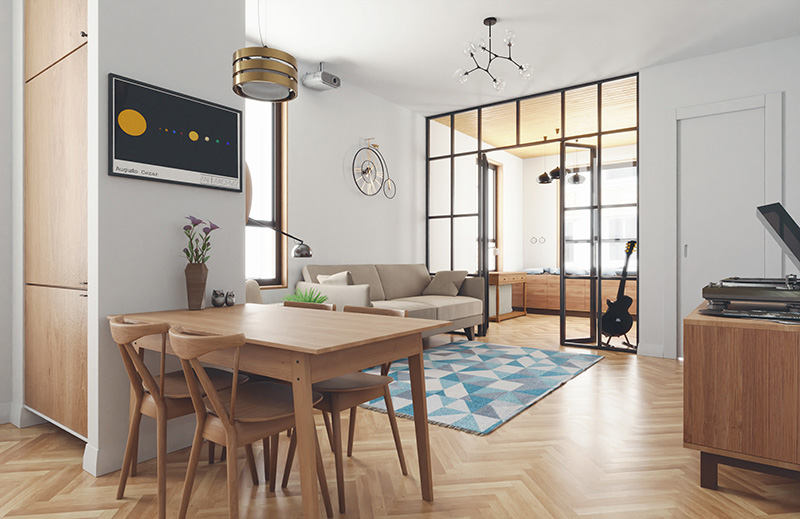 You can see more of this project on ArtStation and Behance.

First things first, I started looking for inspiration by searching for a nice image from houzz.com. I always use this platform for inspiration since I am (almost) sure that everything there is a photograph.

While searching I found the work of a great photographer called Olga Shangina, whose main work consists of interior design photographs. 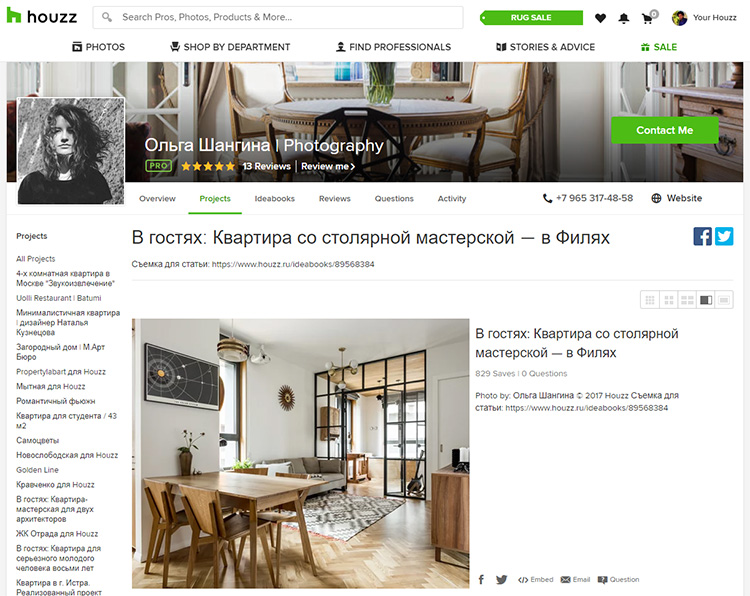 Modeling a room based in photographs

In this project I didn't have access to the floorplan, so I had to improvise. I used a new software called FSPY to correctly place the camera. It was created by the same developers of BLAM, which had the same function. You set up some guides on the scene to mark the vanishing points and it automatically creates the camera for you. After that you just have to import your .fspy into Blender. 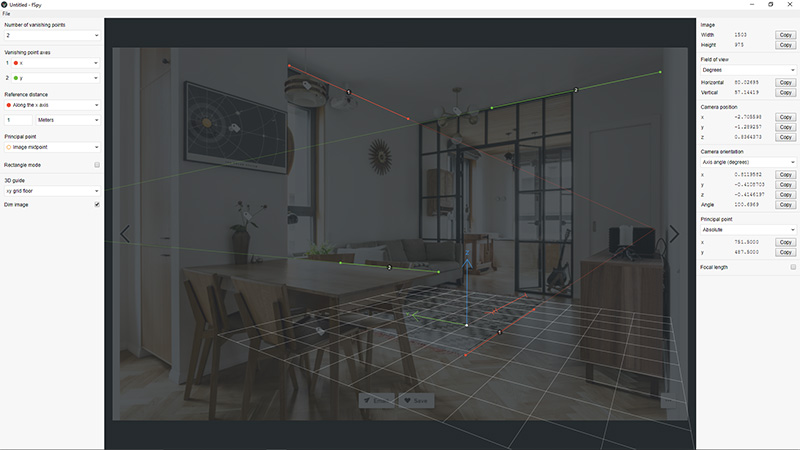 After that comes the usual. I used the size of the rug as a reference to make sure everything had the right size. And so it goes; Shift+A, add plane, move, extrude, etc. Soon the entire room was modeled. 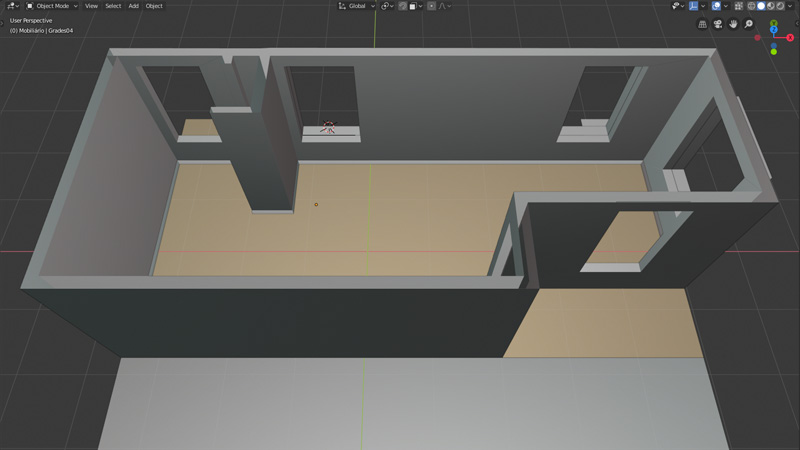 Raw model in its initial stage 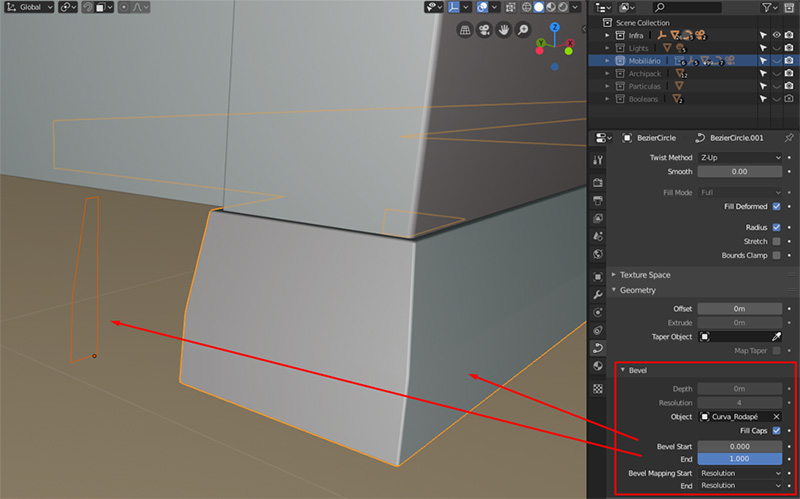 Baseboard detail and its two curves

A curious way of configuring lights…

Configuring lights was quite difficult. For a while I struggled positioning my sun lamp and doing all kinds of tricks, testing HDR and other light sources, trying to make the light in the scene match the light in the original photograph. Nothing worked.

After some minutes (or hours) looking at that picture, I had an epiphany. The photographer used a higher exposure, making the exterior go almost completely white. This made the windows look more like big diffuse lamps than actually windows letting the sunlight pass.

And so… I placed an area lamp at each window trying to achieve the same look and, surprisingly, it worked. 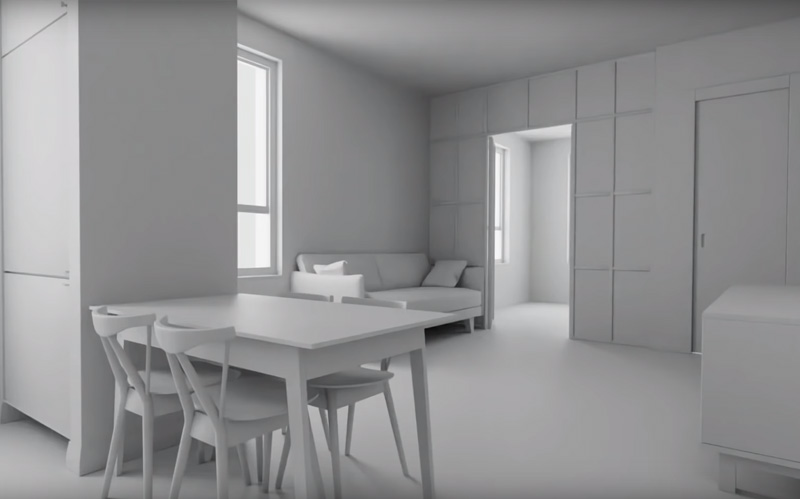 It’s such an irony; I’ve always learned that this is wrong. Whoever watched Blender Guru videos a couple of years ago will remember a video in which he talks about the direction of light and how placing an area light perpendicular to a window was a terrible idea. But somehow, for this particular project, it worked. 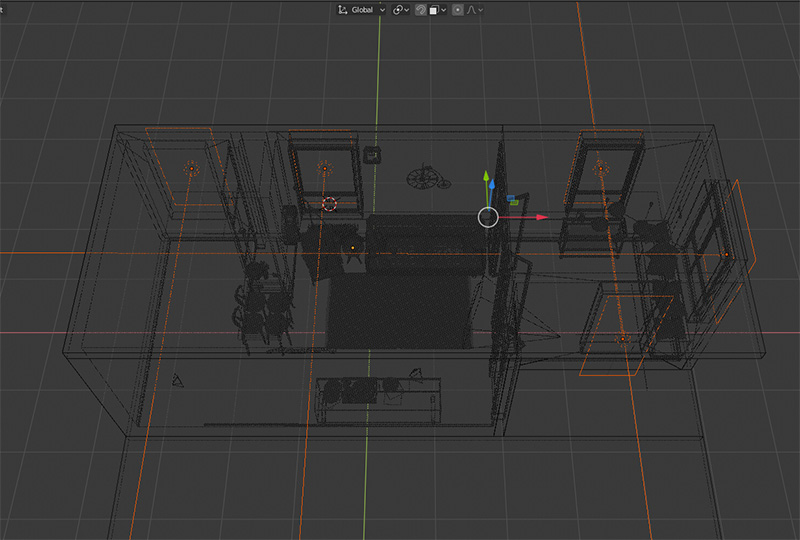 Area lamps are also not realistic at all, so imagine my surprise when, by using this technique, I was able to achieve something very close to the original image. Lesson learned: you need to adapt and break the rules sometimes.

Attention to some boring details

This is a tedious stage for anyone who works with Blender for archviz: to observe and detail the windows and doors as close to the reference as possible. To create them I used the addon Archpack, in its lite version for Blender 2.80. However, I modeled the window frames manually so they would be the same as the reference image. You can see the results in the image below: 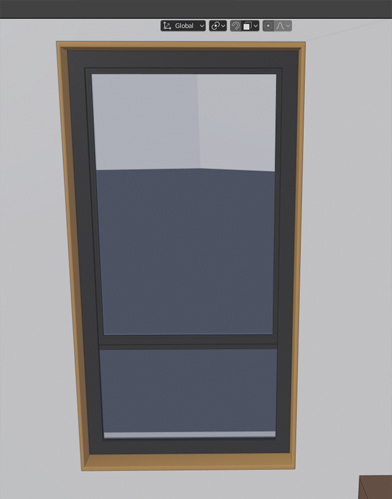 Screenshot from the final window

I didn’t model everything myself. Most of the furniture are third party models that I downloaded on archive3d.net. This isn’t the best website to download 3D models, but they are free and have no license issues; considering this was a personal project in which the main focus was to learn, the models were just fine.

The couch and chairs came from this website as well. On the couch I only changed the feet so they would agree with the other wood objects. On the chair I had to work a little longer, since the original geometry didn’t make any sense. For the dining table, however, I had no choice: I modeled myself, carefully and attentive to details, modeling even the screws on the legs. 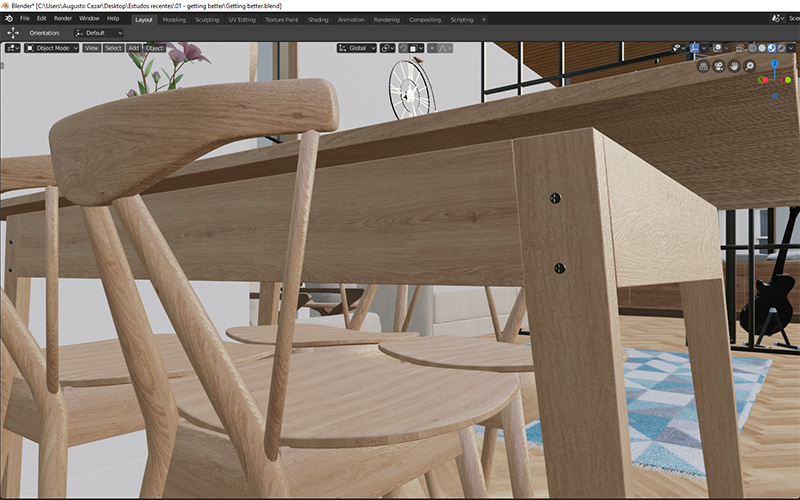 Detail showing the screws on the table

The video projector and the turntable were different. I found them on 3dsky.org. The models there have better quality - but they’re not free. And so I only had to take care of their shaders so they would seem as realistic as possible. Decorative elements usually need to have a lot of details to make the scene more believable. 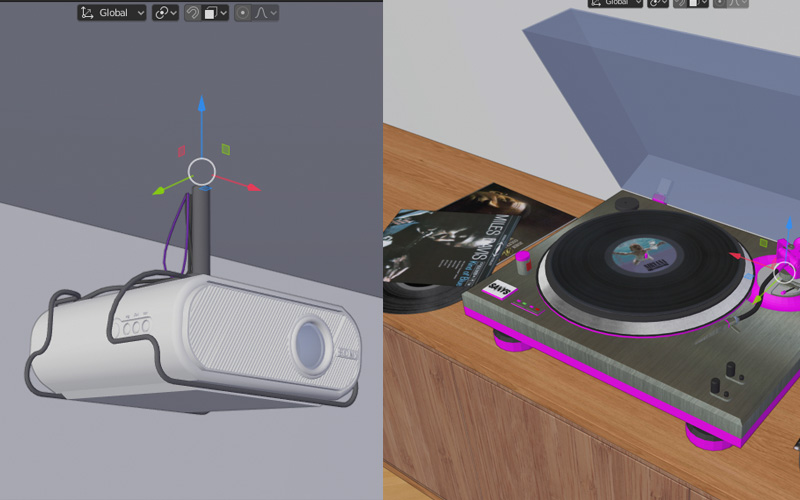 The cabinet in the back of the room is also from 3dsky.org, and I also had to remodel to fix the geometry, otherwise it would be impossible to unwrap it later. Even though it was far from the camera, I wanted to be very detailist, and so I fixed it.

The electric guitar and the heater behind the chair and table came from blendswap.com. Blendswap has some great Blender models that are usually set up for Cycles, which is really helpful for minor decorative objects.

The rug is a regular surface with slight displacement; most of the wrinkles I made manually to give it a special touch. The fringe was made with an extruded cylinder and particle system.

I purchased some textures from Poliigon for the floor and woods. Couch and cushion models came with their own. For the rug, I had to improvise; I spent some time searching for a nice seamless pattern with colors that would agree with the scene. In the end, I used a picture of a carpet that I found on Google and a Bump Map from Poliigon.

Some of the wood textures didn’t really match the rest of the model, so I used some nodes to modify their tones. 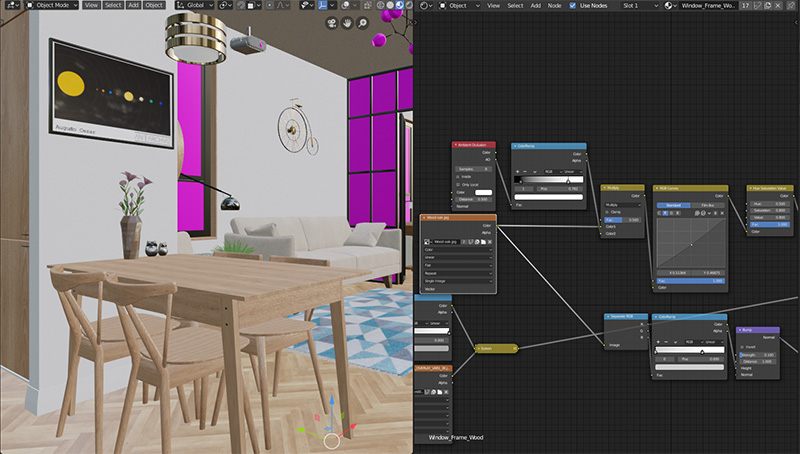 Wood shader with its color modified with nodes

This small flower vase was a nightmare. It was a third party model and its UV map was a complete mess… And it also came with no texture. And so for two hours I unwrapped each and every petal using a flower texture I found on textures.com. I downloaded the free 1k resolution and worked hard so the flower would be perfect. 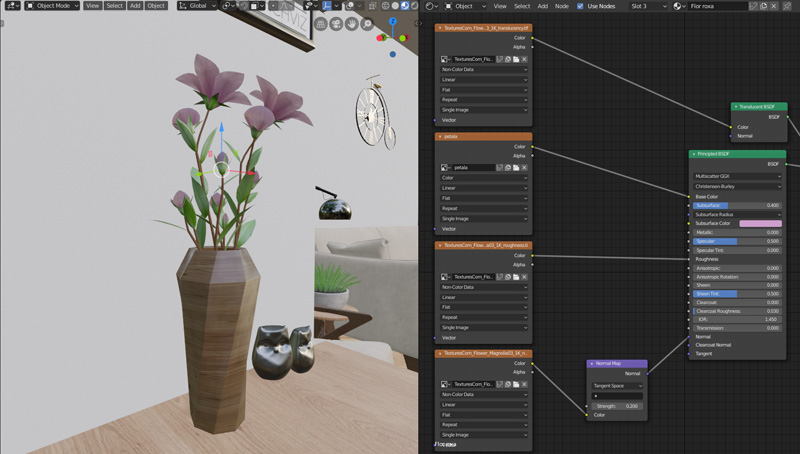 The flower and its shader

And so everything was configured for the final render. I prepared the light paths to prioritize only the transparencies so nothing would go black thanks to the lack of bounces, and finally configured my final render with only 200 samples.

Yes, 200 samples! This was possible thanks to an add-on I recently found, D-Noise, developed by Remington Graphics. I couldn’t imagine the impact this add-on would have on my workflow. I even made a video about it on my YouTube channel about Blender + Architecture - people need to know about this!

Since I use a GTX 750ti (this add-on only works if you use NVIDIA), I was able to make a high quality, high-resolution render in less than an hour. It was unbelievable!

As a final touch I corrected the colors for a more neutral tone and added some glow on post production and…. Done!

Obviously I repeated this process about 8 times until I finally felt satisfied with the result.

This project took around 5 days to complete, including the three renderings. I believe it was quite fast considering most of the assets had broken geometry and I had to correct them manually.

I love working with architectural visualization, and because of the lack of Blender courses oriented to architecture in Portuguese, I created a YouTube channel and two courses about Blender + Archviz. I always like to push my limits as a 3D artist, and I strongly encourage my students to do the same. On every project I work on, I learn a new lesson. This time, the lesson was: be extremely detailist.

With this learned, maybe in the future I will make a model where the light pendant doesn’t get in the way of the video projector. I bet you didn’t notice either! 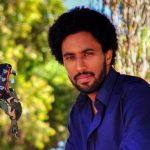 Augusto Cezar, I work as a 3D artist for architecture and interior design using Blender as my main tool of work. I'm also co-founder of A.N Archviz Studio, and I have done many projects of architectural visualization for national & international companies. 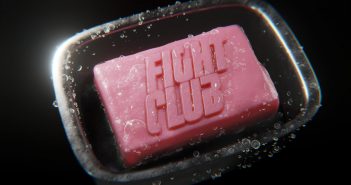 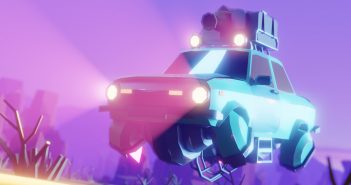