Hi, my name is Torsten. I’m a freelancer from Berlin, Germany. I spent most of life using Cinema 4D, but discovered Blender two years ago for a web-project where we needed to run a 3D software on a webserver and to control it via PHP. This is the story of it.

When my client asked me how we could automate adding customized elements into existing videos, I had some ideas how that might work theoretically. I had already worked with ffmpeg on a Linux webserver, encoding large MP4 master files into smaller streamable videos on demand via a browser interface. I knew that ffmpeg was able to cut video files together, add images, rotate stuff, place a video inside another video; but in this case the requirements were more complicated. After some failed experiments I came to the conclusion that I needed motion tracking. So I began searching for a software that offered motion tracking, could load a video file, add stuff to it and save it again - on a Linux webserver with the console. Eventually I stumbled upon Blender and fell in love.

These neat facts allow us to start Blender with a click in the browser and render an animation. We can see the render progress and stop Blender if we want or receive an email when rendering has finished.

What you need to know

What you need to have

Notice: we use CPU rendering in Cycles. For GPU rendering additional libraries may be required.

Depending on your Linux package manager the commands to install may vary, but on AWS (Amazon), for example, the commands are:

GCC is required to compile glibc 2.24 which is used by Blender 2.80. If you plan to use an older version of Blender, you can skip this.

So far so easy. The next step is more complicated and error prone. Compiling. Yeah.

Go to your web servers root directory and create a directory for our project called “blender”.

Download Blender from blender.org by copying the link for Linux (check if your kernel is 32- or 64-bit) and paste it to the console.

If everything worked we should see this:

Congrats! You’ve made it. Now the fun part starts.

For this tutorial we want to prepare a test scene. Maybe the default cube with bevel and some textures.

I will use a texture and HDRI for lighting from texturehaven.com.

Be sure to download the PNG, which can be re-saved without quality loss. I also scaled the UV up so that the texture covers one cube face completely. 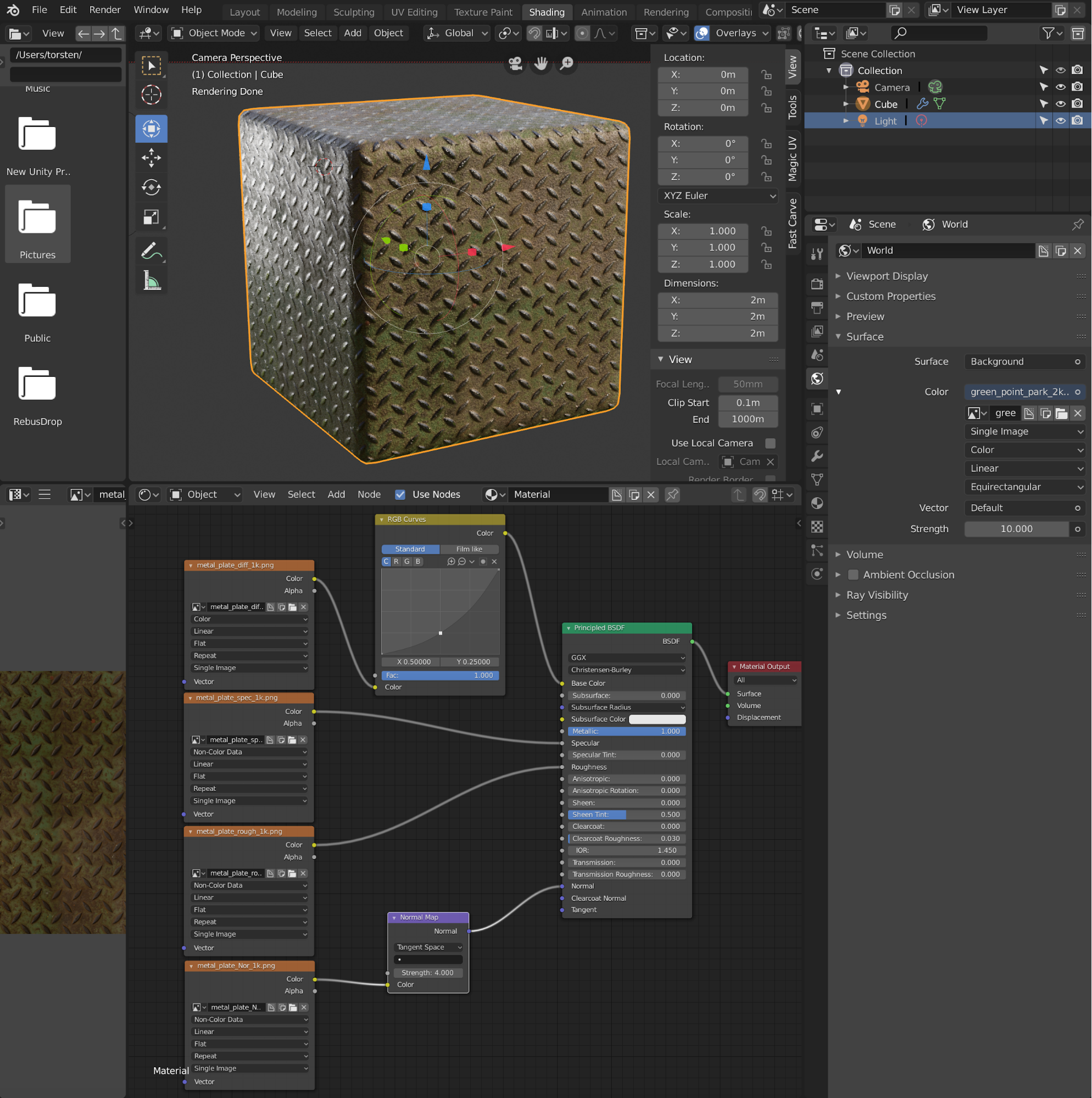 Make sure the paths to the texture maps are all relative. If you upload your .blend to the server, all external files should stay in the same location relative to your .blend.

We do not want to pack them (unlike when using a render farm), because we may want to manipulate the textures before rendering.

For the sake of this tutorial I will not cover security concerns, so I assume you are using a secure closed system, only accessible by you.

Using Blender from the console

One word of advice regarding testing: using external servers or cloud services like AWS costs money. To practise using Blender via text commands you should always start locally, just like web developers usually have a local webserver running on their laptop, before they deploy a website to an online server.

Non-Linux users need to find the program’s binary in order to do that. On OS X it’s hidden inside the Blender.app “file” (actually a directory) in “Contents/MacOS/”. Copy the whole “Blender.app” to our project directory. All the commands we use will be called from there.

To make the code easier to read I will omit the actual path to Blender, because it is different in Linux, Windows or OS X. Instead I will just write “blender”.

The most helpful command to begin with is:

This will list all available commands and options (which are a lot). The most important ones are:

These commands need to come in the order they will be executed. First we tell Blender to just run in the console (-b) and not open its UI. Then we tell it which .blend file to load, after that we set up the rendering output (-o) and as the last command we tell it to start rendering (-f). We need to tell Blender where to save the image before we let it render the image. So rendering will almost always be the last command.

Assuming that we have cd’d into the directory where our test.blend lies, and created a dir called “results”, we can start rendering with this command:

The #### in the output filename will be replaced with the frame number. If you don’t add that, Blender will append 0001.png to your output file path, which results in ugly filenames like “test.png0001.png”. 4 times # represents 4 digits. If your animation has more than 9999 frames just type #####.

Running this command should produce an image “test0001.png” in the results directory. 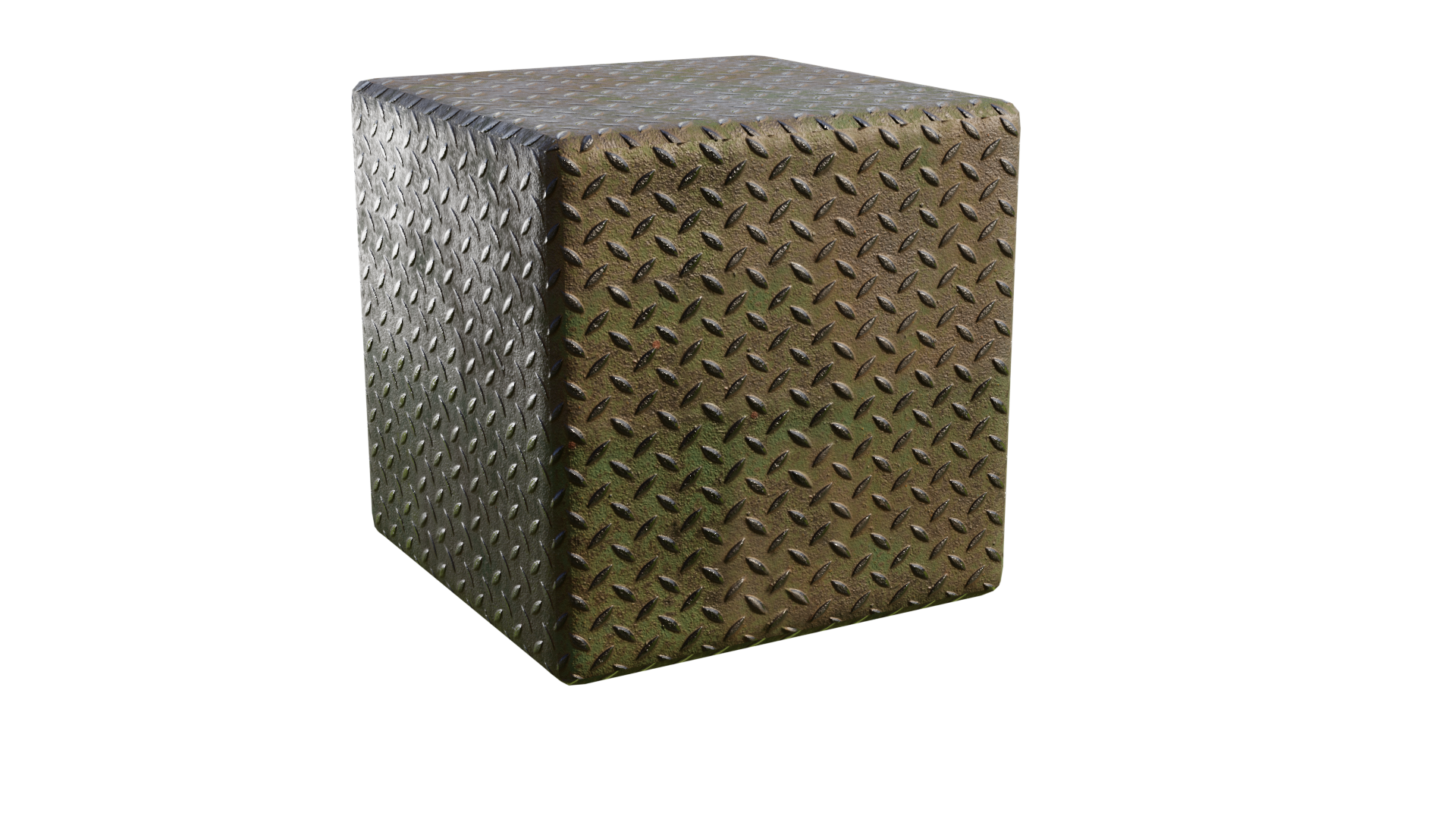 When Blender runs in the console it produces a lot of text output and, besides error messages, what we are looking for are lines like this:

There we have the frame being rendered (Fra: 1), memory usage, time and, at the end of the line, Rendered Tiles (of use when you just render one big frame). Basically the same output you can see in the UI in the render results window.

Since our ultimate goal is to control Blender from a browser we need to read this output with a script. One basic functionality in the console is to direct text output from programs to log files:

In our case we name the log file according to our project “test”:

While we’re at it, we can also tell the program to be silent, give us its process id (PID) and give us back control of the console.

Blender now creates 2 files immediately after startup, one containing the progress and one with its PID. Both files can be read with server-side script languages like PHP, Perl or Python.

Important: place the log and PID files into a server readable directory, for example the same as your .blend file. For readability this has been omitted from the code above.

You can start Blender multiple times, but keep in mind that every instance of Blender should write to its own log file and PID file.

Making a PHP script to start Blender and call this script from a browser is quite simple.

exec() allows us to call shell / console commands from PHP.

Save this as “index.php” in the project directory.

However, getting your computer to execute this command takes 2 more steps.

First: copy your Blender application directory (or on OS X: blender.app) to the same directory where your .blend is.

Second: files, directories and programs have owners (user and group) and rights. The webserver, from which we are trying to start programs, is running under its own user and group called “_www” (in most cases).

We won’t get permission to run Blender unless we give everything to this user and group. You can do this by running this command:

Also make sure all textures, HDRIs and the results dir also belong to _www:

Here’s what my setup on OS X looks like:

Documents in this case is in /Library/WebServer, not your personal Documents directory. It is the root dir of the webserver.

The message “Maybe this worked.” should appear and the CPU should be working on a new image now.

Tip for OS X users: if you want to go back to the console, you may get a message “Permission denied” when trying to start Blender. That’s because you don’t have the rights anymore. Use “sudo“ before your Blender command:

To find out for sure if Blender is actually running, we have multiple options:

Option 1 can be misleading - what if there are more than one instances of Blender running? Also this is a bit messy to do in PHP.

Option 2 is kind of stupid. So that leaves us with 3 and 4, which is what we will use, but in reverse order.

We’re going to add some logic to our script now

Here is a basic outline: 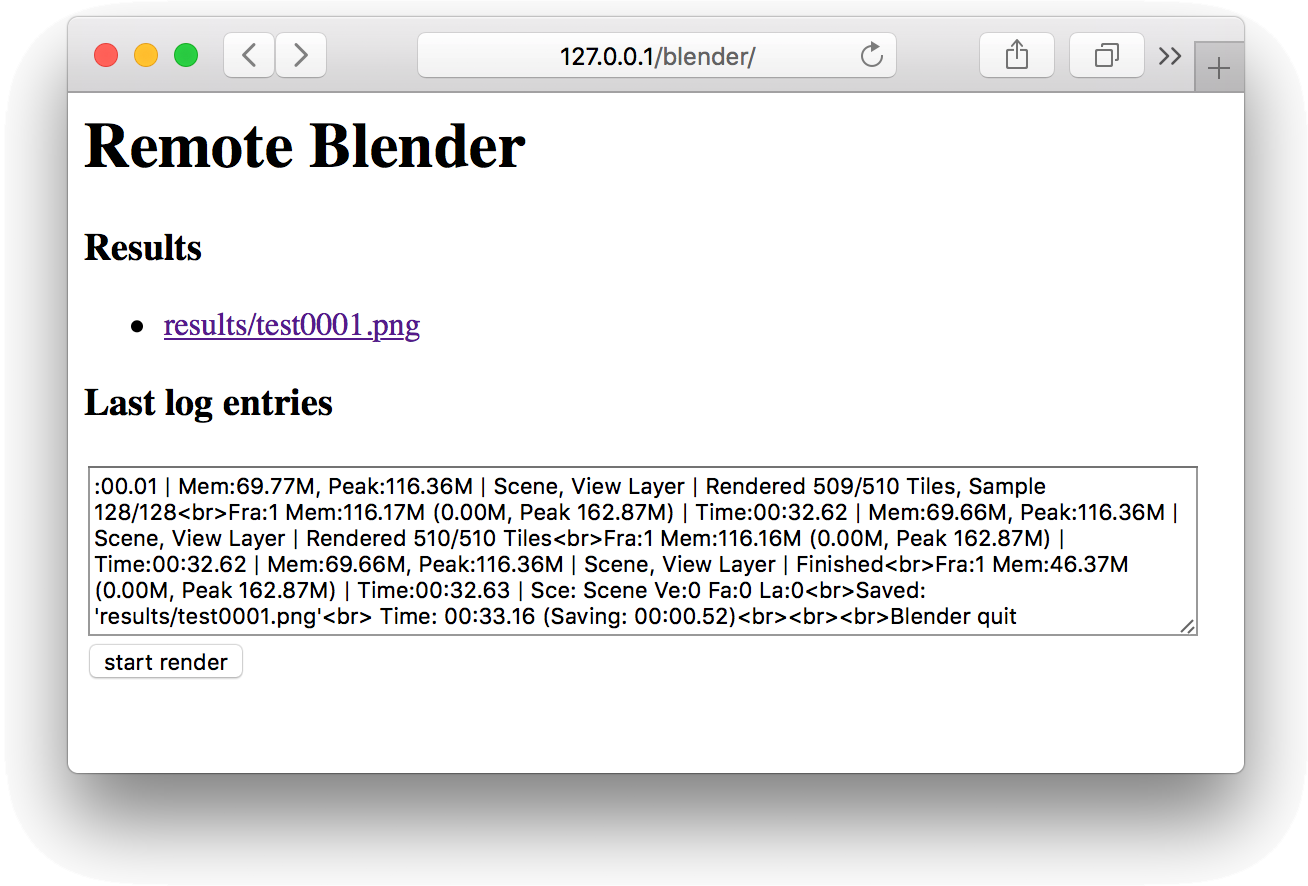 Our interaction with Blender via browser is rather dull at the moment. We can start it and download results and see error messages in the log. But by using PHP’s image manipulation libraries we could add new data to our scene before rendering, e.g., by adding a custom line of text to the metal maps. We can also use custom fonts in TTF or OTF format, if you place them in the project dir.

Before you change the textures, make a copy of all maps and place them in a directory called “master”.

We will test our code first in a separate PHP file:


And save this as “image.php”.

If you don’t have ImageMagick installed on your local system, I recommend this guide on stackoverflow.

It is also possible to manipulate images with the built-in library GD. But I prefer ImageMagick. 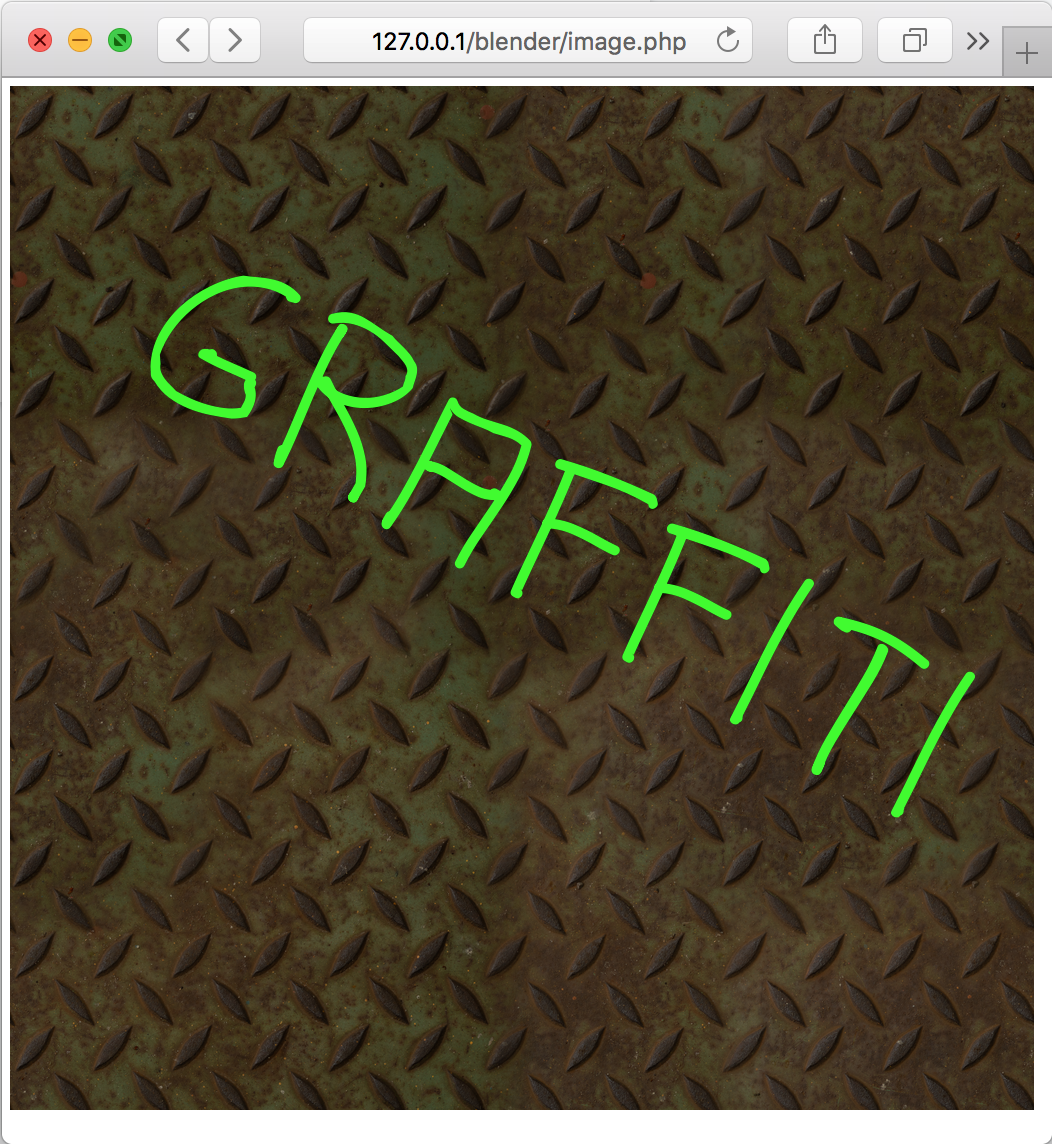 Right now the inserted text is fixed in code, but with some HTML we can add a text input just above our render button to change the text to whatever we want, right before rendering by reading the input of $_POST["text"]. 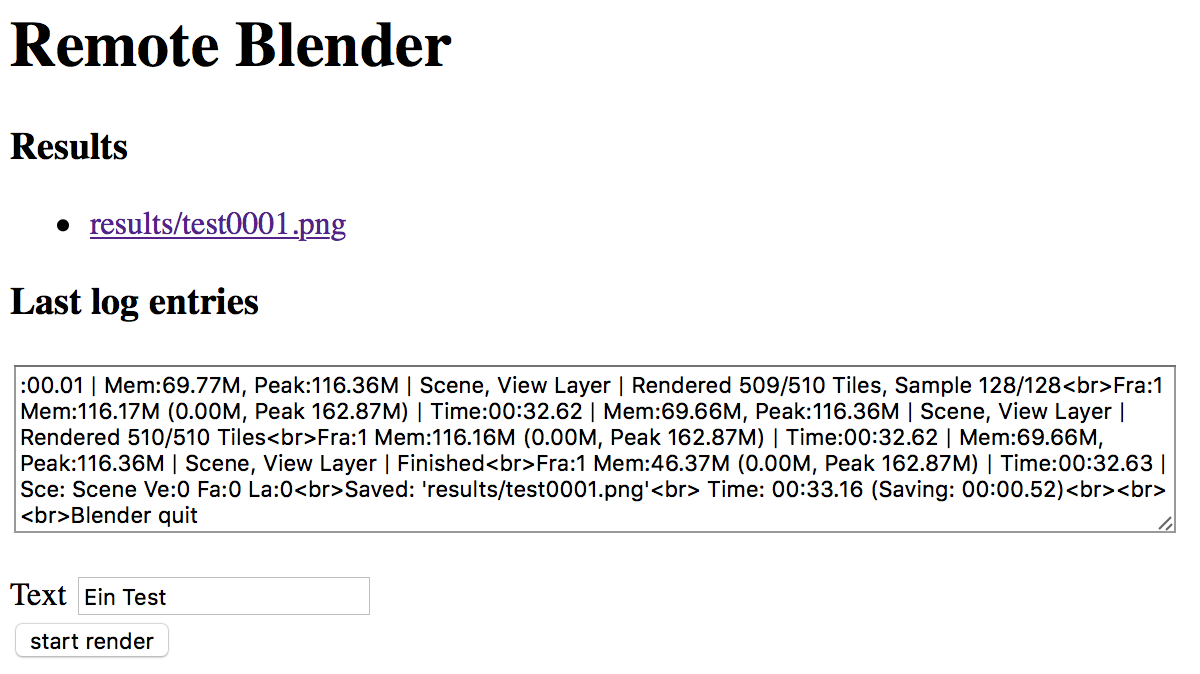 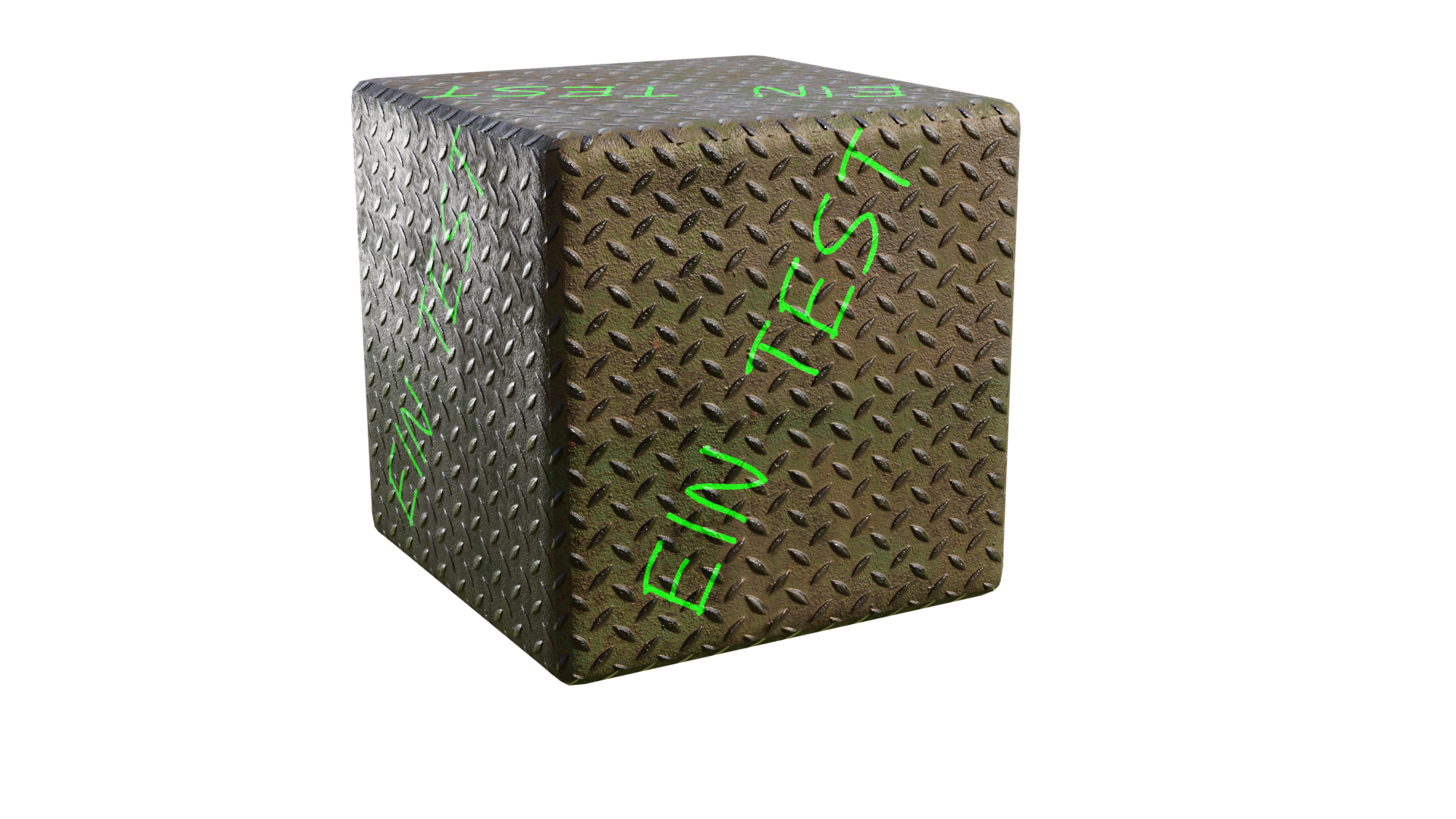 The font used in this image is my own font, just replace it with any TTF or OTF font file you have.

It is just as easy to change the roughness map or bump map or change the color of the whole map, add a new image on top etc. Your imagination is the limit.

Two things are still missing: render progress and automatic reloads. Progress for one frame is calculated by parsing the log file for rendered tiles and dividing “rendered” by “to render”. Progress for an animation by parsing for the frame number and dividing them by the total number of frames. Unfortunately I don’t know how to get the total number of frames from a .blend file, so we have to know that number and put it in code.

Here is the code to parse progress for one frame

We can display the number directly or use it in CSS to style a progress bar:

To see this bar update itself we also need to reload every few seconds:

Place these lines instead of the placeholder

The same reload command can be placed right after “exec(‘blender….” so that we see the progress bar immediately.

(Disclaimer: use the code at your own risk! This is development code for demonstration, not production ready code!)

Where to go from here

So, I hope you were able to follow me through this tutorial. If you’re not a regular coder you may be a bit overwhelmed by everything. Just keep in mind, you’re not the only one with the same questions. Everything used in this tutorial is well known and documented on the internet. It is all a matter of patience and putting it together and searching on Stackoverflow.

Torsten Dudai, 38, freelancing programmer, designer, allrounder-problem-solver, living and working in Berlin. Started with Cinema 4D back in 1994 on an Amiga 1200, but switched to Blender 2 years ago and never looked back! My commercial work is mostly product visualisation, which you can find here. I’m also co-organizer of the Berlin Blender Meetup: if you’re in Berlin and interested in Blender, you’re welcome to join. 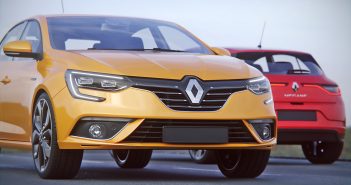 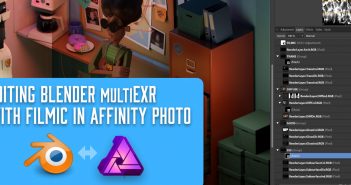