When you hear about "VFX" you often think of a sci-fi or a surreal imagery. When watching films that portray a fantasy type of environment you know this isn't real, and the fact it is CGI doesn't surprise you. This is why I decided to work on a short film that tells a mundane story from the 50s. This way even if VFX were used, the audience would probably never notice.

As an independent filmmaker, I have certain budget constraints and VFX is a means to overcome some of these difficulties. This is the reason I am using Blender for most of the 3D or 2D work I don't have an ability to film or photograph as real subjects or locations. As with any software tool, you can use Blender to do both great and mediocre work. It all depends on your skills.

"The Letter" is a short film where a young man writes a letter to the woman he loves, but even in the unfavorable circumstances that come upon him, he manages to be romantic, and finishes writing the letter. It was all shot on a blue screen where the only real thing was the table with the objects on it, and of course the actor. The environment was created in Blender, rendered and exported as several layers of 2D images that were later composited in the video editor.

The city scape was created out of three boxes with a texture showing concrete walls and windows, some of which with glowing interior lights. The boxes were used in a particle system that multiplied them, so they looked like a cityscape. The execution is fairly quick and simple, because these objects were not that visible in detail.

The interior took more time, though. It mimicked the lighting that was used on the set. The shot from the outside of the room required to make simplified models of the table and the objects on it. As they were seen in the distance and being blurred, they didn't need to be in a great detail. I did that, because the set was too small and I couldn't film it from a similar distance. The other elements of the interior were more visible and required more attention. The moving pendulum of the clock was rendered as a separate layer that was later animated in the video editor. This was faster to build than rendering a full 3D animation. Using the Filmic color space preset gave me the opportunity to render a realistic environment and with a bit of a blur to make it feel less digital and less perfect. The Denoise feature is a real time-saver too and helped achieving the required realism of the scene.

In the following video you can see a breakdown of the VFX where you can see the bare bones of the environment in Blender:

Filmmaker and commercial portrait photographer based in Sofia, Bulgaria. 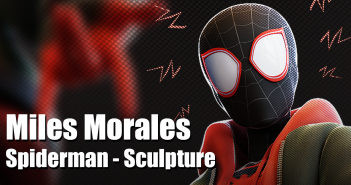 Previous ArticleSculpting Miles Morales from Spider-Man: Into The Spider-Verse 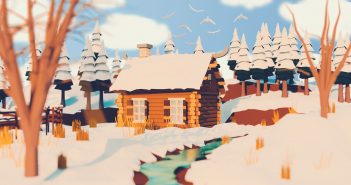 Next Article The Art of Lux Artt