Baz shares the creation process of the cartoon character video he created for a Kickstarter campaign.

As a long time Blender user and enthusiast, I'm thrilled to finally show a project I've been working on for the past year on which I used Blender extensively. I've been using Blender in my work for a few years now and it has been perhaps the most invaluable program in my toolbox bar none, and it wouldn't have been possible for me to create the following animation without it:

For the Kickstarter pitch video, I decided that I'd attempt to animate it in the style of an 80s cartoon intro such as He-man, Thundercats, GI-Joe, etc. I knew that I'd need to use Blender to augment the hand drawn animating process because I didn't have the luxury of time to do it all by hand, and so I set up crude 3d models and animated them with simple armatures, and used them as a basis to draw over.

I initially wanted to use grease pencil, but I hadn't been as practiced with it at the time so I did all the draw over rotoscoping in Photoshop instead (indeed now that the new grease pencil update is in 2.8 I plan to replace Photoshop for this purpose).

I also exported lighting passes, done in Blender internal, to get that cell shaded look, and layered it in compositing to get the final effect.

I used particle effects in many instances to get those energetic bursts of lights,

As well as where I needed to create fireworks,

Each of the anime style, fast moving backgrounds were done entirely using procedural textures in Blender,

Of course all of the product reveals and animations at the end were done in Blender cycles, and for a couple of the sequences I employed the use of Animation Nodes, which is one of my absolute favorite addons.

I don't know where I'd be without Blender today, I owe a great deal to this amazing program and as such owe a lot to the people that make it possible, from Ton himself to the developers and the amazing community that supports it.

If any of what you've seen here Interests you, check out the Kickstarter itself.

You can find more of my work at: www.bloodandchrome.com

And if you have any questions about the animation and how Blender was used feel free to email me at [email protected] !

Previous ArticleHow to Create a Realistic Texture with a Single Image 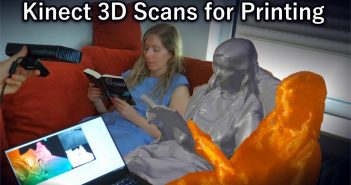