Earlier this week I posted the work of Lukas Walzer, which received a lot of praise for the readers. I asked Lukas to tell us more about his most recent work, Khalau - his entry for the ArtStation 'Beyond Human' contest.

My Name is Lukas Walzer, I’m 24 years old and currently working as a 3D artist at the product design office ipdd in Stuttgart, doing animations, renderings and short explainer films for products.

I use mostly Cinema 4D at work, but prefer Blender for my personal projects. I came across Blender in about 2009, but did not begin working with it seriously before 2016. I think, art challenges are a great way (if not the greatest) to improve, so I took part in some of them to get better. The piece that I’m about to describe now was also made for a contest, the 2017 ArtStation Challenge “Beyond Human”.

When thinking about the topic in the beginning, it was clear that I wanted to bring my own concept and did not want to use a finished concept by one of the concept artists in Phase 1 of the challenge (which is, of course, nevertheless a great opportunity and an awesome idea by the ArtStation staff!). It was also clear that I wanted to do some kind of mech, since that is something I had never seriously attempted before. Because of that, I knew that my hardsurface skills were far inferior compared to the professionals I would have to compete with, so I decided to go with something more organic, unusual, drawing inspiration from for example H.R.Giger. I thought of some kind of biomechanical beast that could reproduce itself using 3D printing techniques.

Below you see some of the references I gathered on Pinterest: 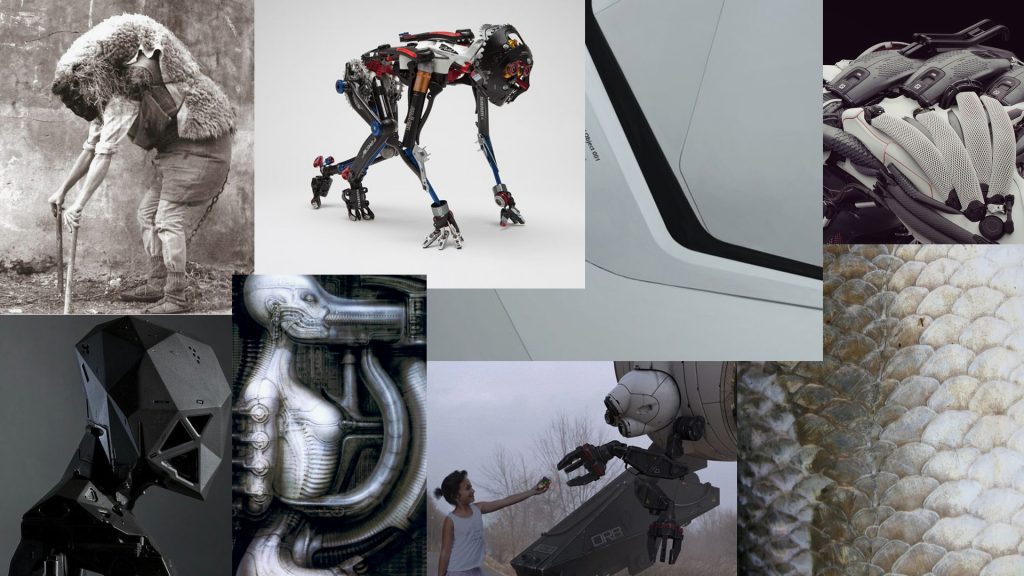 I then blocked out the basic shapes in Blender, rendered it out and did some photobashing and overpainting in Photoshop to get an idea how this creature might look like. 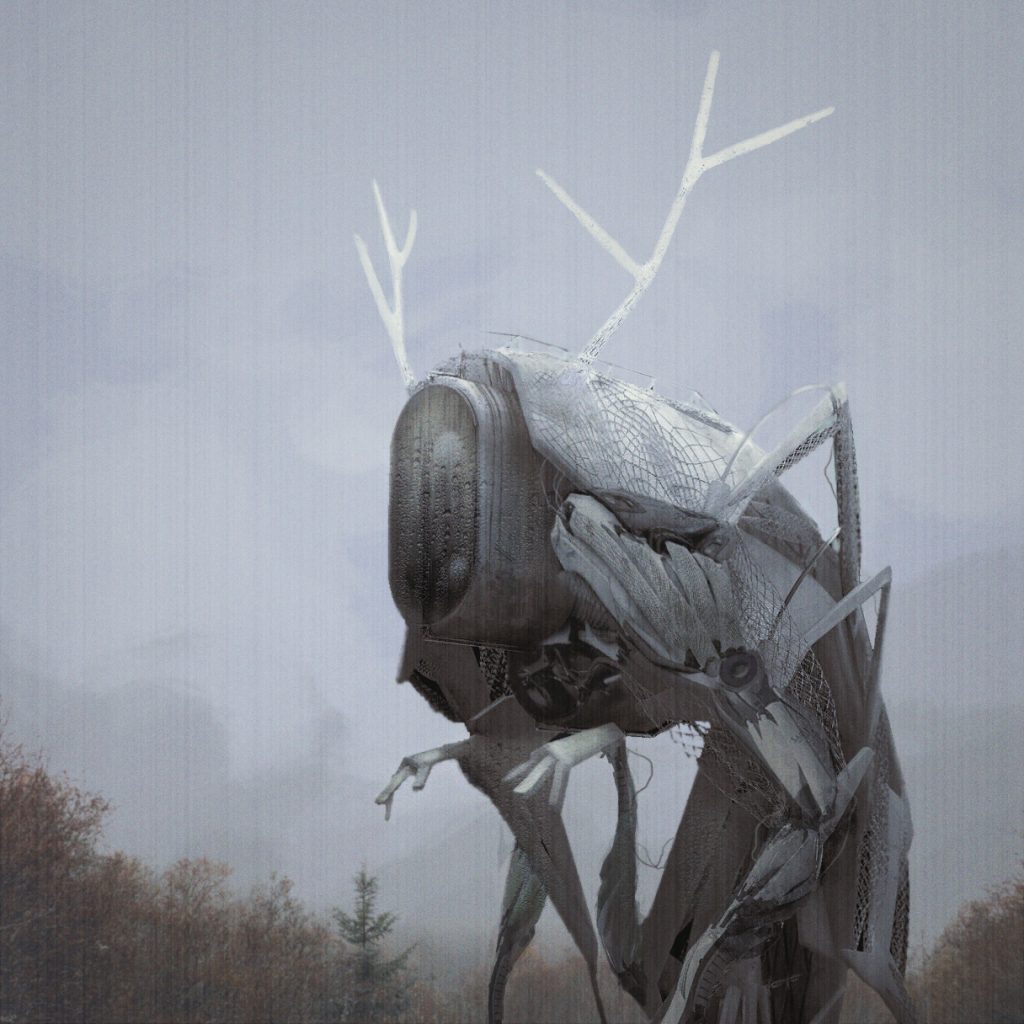 Roughly based on this concept I continued to refine my blockout. 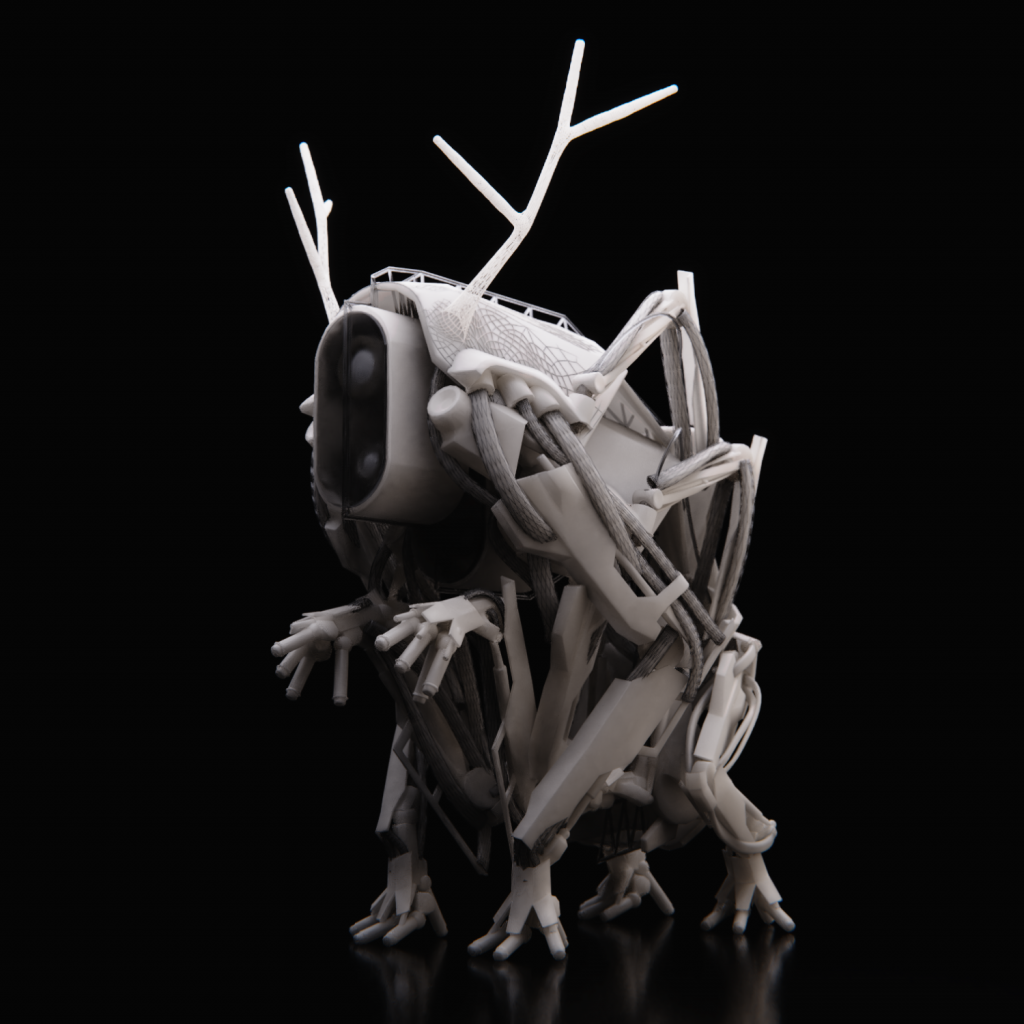 I think about lighting and environment pretty early in the process, because it gives me the certainty that my work will look good in the end. I had made the mistake of neglecting the environment in the first stages of my “Ghost Driver” train and bitterly regretted it by searching for the right lighting and setting for weeks! This time I came up with the final camera position and basic environment pretty early after some tests. Then I went to Photoshop again to paint some details that I would later model in 3D: 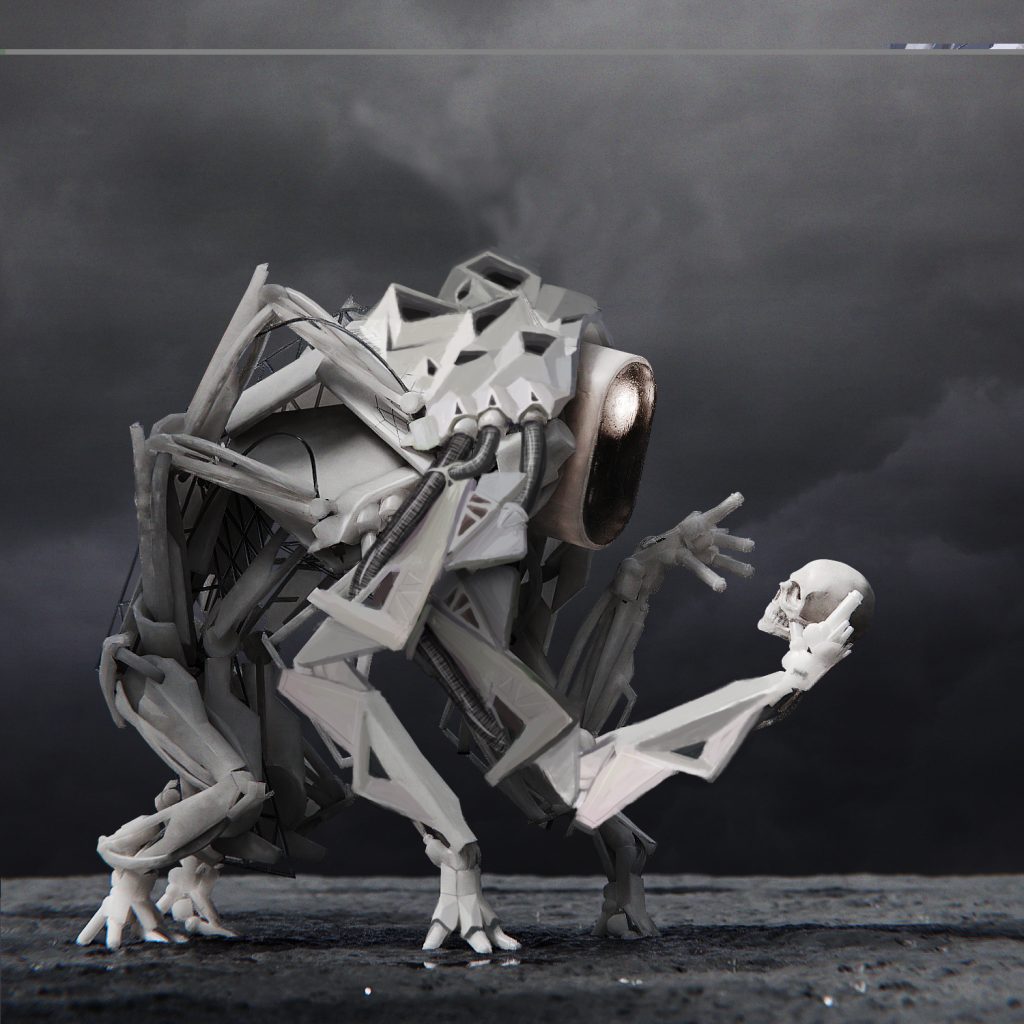 The rest of the process was the most time-consuming, but also pretty straightforward. I just modelled one part after the other, messing my way through the whole model. For some parts I used the HardOps addon for Blender which helped me a lot to quickly get details. In the following image you see my whole process from start to finish: 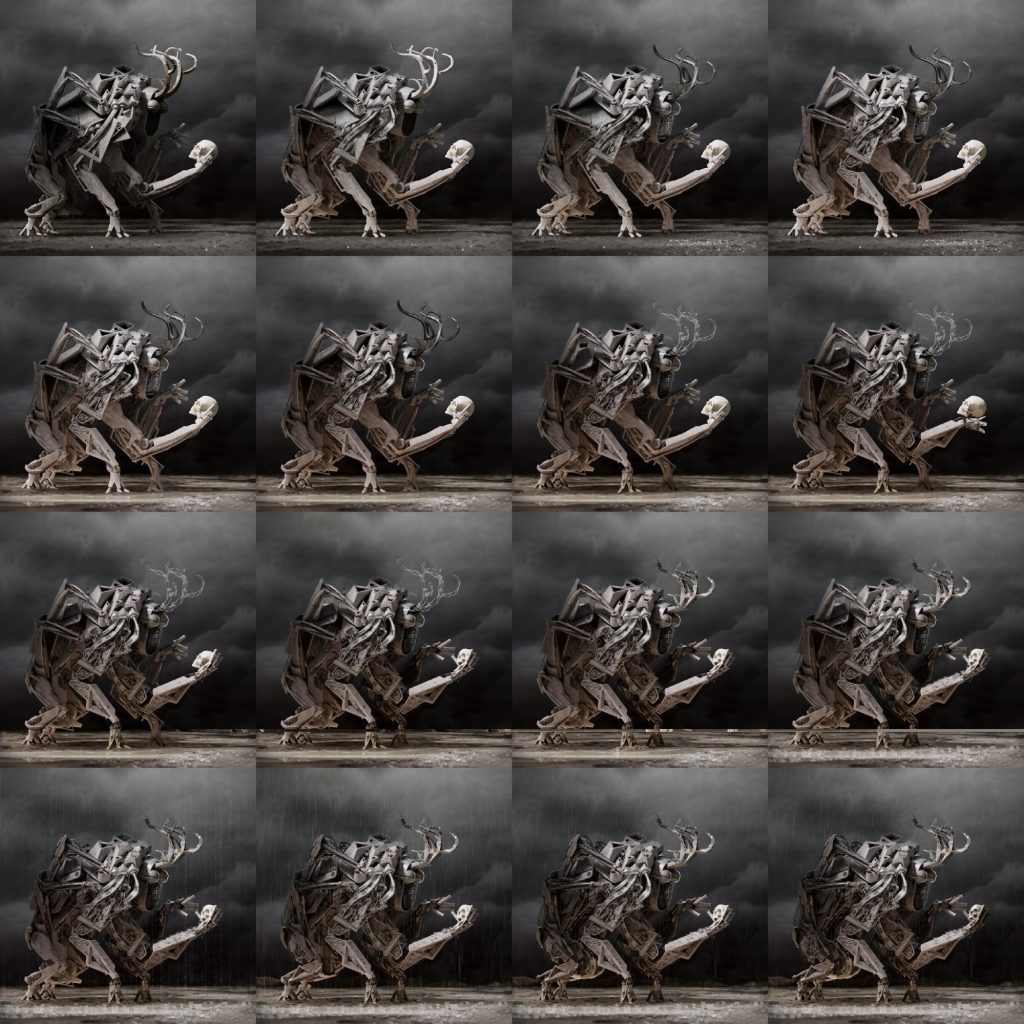 And this is the final result: 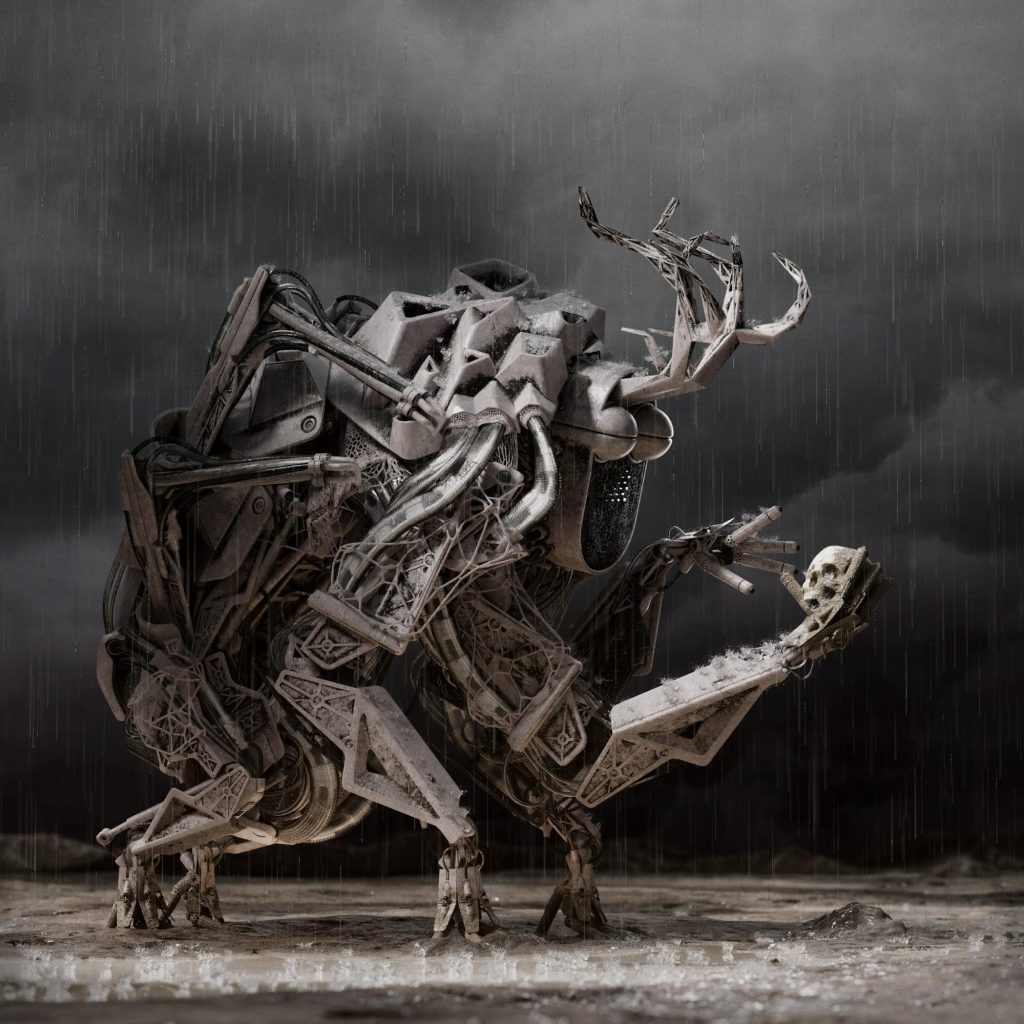 Although it lacks a lot of the consistency I had wished for, I can say I’m quite happy with it. I also wrote a little story set in the world these creatures - the Khalau - live in. You can find high-res images and the story on my ArtStation portfolio.

So, I think that’s all. Thank you very much for this interview! 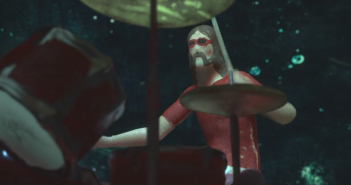 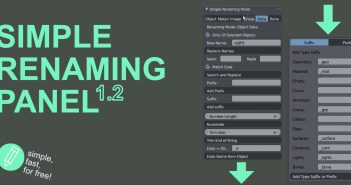