'Star Trek New Horizons – Assimilation' is a fan-made 'total conversion' mod. Blender was one of the tools that were used for their impressive trailer, and we're talking to the Blender artist behind this project - Alexander Weide.

Assimilation marks the Beta release for New Horizons, a Star Trek-themed total conversion mod for the sci-fi strategy game Stellaris by Paradox Interactive. New Horizon has been hailed as the best Star Trek game of all time” by Rock Paper Shotgun, and was included in PC  Gamer list of “Best mods of 2016”. It is also the most popular mod on Steam Workshop, enjoying from 99.4% positive review score.

PDG is a truly international team, with over sixty active members from twenty countries across Europe, North America and Asia. Among the team are professional 3D artists, former special-effect experts that worked on the TV show Deep Space 9, experienced game designers and many more.

The new Beta release, Assimilation, will finally let the players take control of two of the most famous villains in the Star Trek empires – the Borg and the Terran Empire.

As the Borg, the player will be able to construct huge, solar system-spanning Unimatrix and assimilate the galaxy to its will.

As the Terran Empire, take part of the first-ever ‘scenario’ for New Horizon and Stellaris – a dedicated Mirror Universe alternative map...

Alexander Weide was the main artist responsible for the production of the 4K Trailer. He has agreed to give a small insight into the production process.

About the trailer project - Alexander Weide

The idea behind making a trailer for ST: New Horizons was, not only to give our players a really nice mod, but also something which can boost their imagination and create a sort of visual environment around the mod. We also wanted to go beyond what mod teams have usually done in the past. We wanted to raise the bar, like in the mod itself.

The plot of the trailer is quite simple, really: it shows a typical gameplay experience of our mod. At the beginning there is only a Universe and some stars. We are all made of stardust. Then planets gather around and life starts to conquer these planets. Life is growing and gains the ability of faster than light flight. At the end there is this one inevitable conclusion, two species will have to fight for the right to conquer the universe. This was the best way to introduce the Borg, because the Borg has a very unique way of life.

We also knew right at the beginning, that a Trailer in 1080p is not an option. 4K is becoming the standard these days, but this makes it difficult to really handle the look of the original series. Hence we chose to focus on the next generation era. 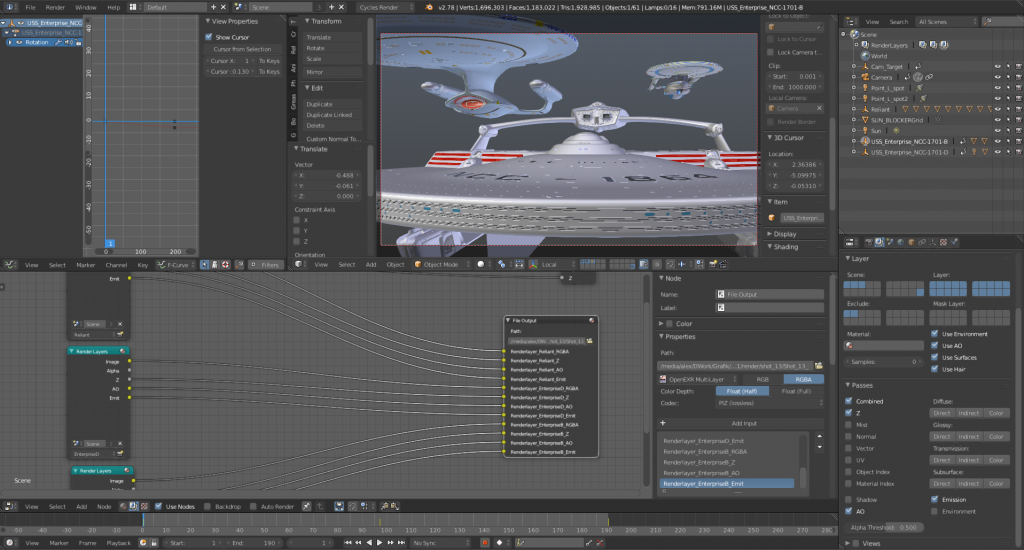 In February we started with preproduction and done some tests. At this point we decided to use a pipeline around Blender 2.78b and 2.78c, but also Houdini, Natron, Fusion and Davinci Resolve. We chose those tools mostly because New Horizons is, in the end, a non-commercial project and they offer excellent results in affordable ranges.

Another nice thing was, that Chris Kuhn from Kuhn Industries contributed us some of his amazing 3d Models for the trailer production, and all of his models were originally built in Blender. We also get ship-contributions from Raul Mamoru. Both 3D modelers have very exciting skills, and it was a logical choice to use Blender.

The storyboard, animatic and even the pre-edit were all done in Blender itself. It was very fast and intuitive because we have created 3D model scenes right in the cut and were able to feed them directly into the cut scenes.

In the end, it was very easy to determine how many frames we needed to render and plan accordingly. We were also able to test the music at a very early stage. The soundtrack was not an original creation of the team but we were allowed to use the Star Trek Symphony, a wonderful composition of Sam Dillard of Samo studios.  In the end, I think the score fits very well to the images. 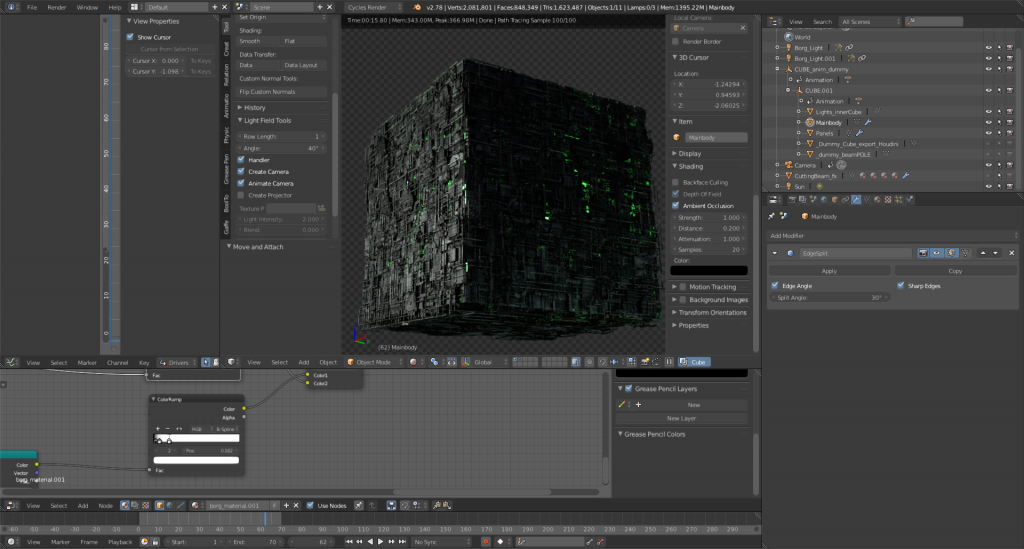 There were only two people in the core trailer team, myself and Marc Schmelzer (G-man), one of the founding fathers of the mod. He helped animate all 21 of the shots, even thought he was learning this subject as the project was going on.

What I personally learned from this project is how to direct a project of this size. This was my first real job as a director, not just as a VFX supervision or CG artist. At times it wasn't easy to communicate my vision with the entire mod team, because everyone has their own ideas. A director's job is to find common ground without losing sight of your own vision. In the end, I think the result looks beautiful.
After animation, we exported the ships movement via Alembic. This was needed for the composition process later, and for the in Houdini created weapon effects. After the export, we setup the render layer in Blender, to correlate with the final composition. We rendered mostly at night, on personal Linux Mint and Ubuntu computers fitted with an Asus Nvidia 1050ti OC card. This card is so silent and cool the fan doesn't even trigger in summer.

90% of the trailer was rendered in Blender cycles, with the solar flares and final explosion rendered in Houdini Mantra. This was due to the large amount of particles involved in these shots. 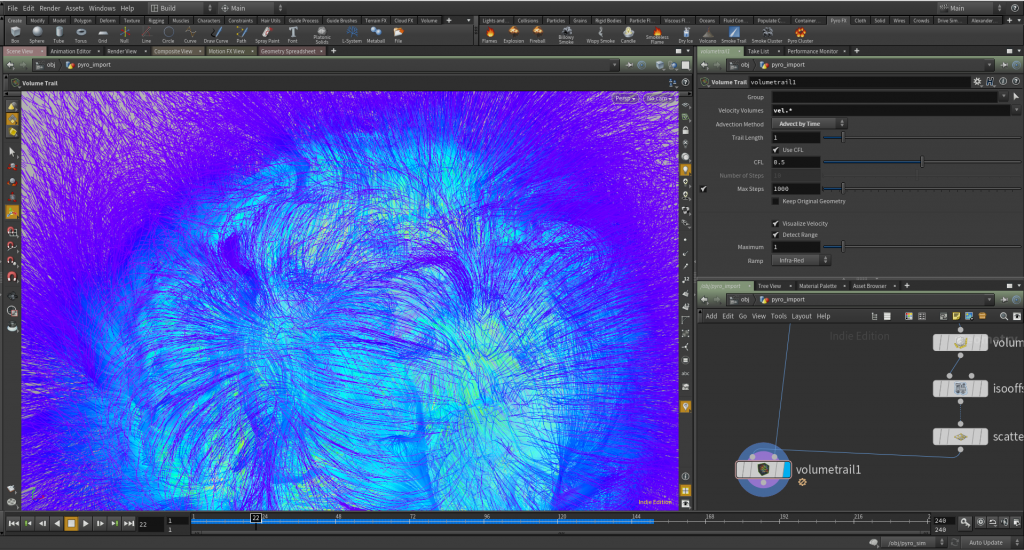 We also used Houdini for the creation of weapon effects and explosions. The Borg Cube itself was built using procedural tools inside Houdini. We had to use Houdini cause its felxiable in prodecural modeling. The final Cube had a total of over 2 million polygones in the trailer. We later exported and downbaked the model and made procedural variations to get this cube into the game.

We ended up with hundreds of gigabyte of simulation data in Houdini, which was then exported into Blender with a self-developed Houdini Volume exporter. We then rendered all of the weapon effects and explosions in Blender Cycles.

Final composition was in Fusion and Natron, using the Alembic data to create motion vectors and sky/space background passes. Fusion gave us a very nice 3d compositing environment. The final Layer Compositing took place in Natron. Finally, we brought everything to Davinci Resolve Lite for editing and color-grading in 10-bit. 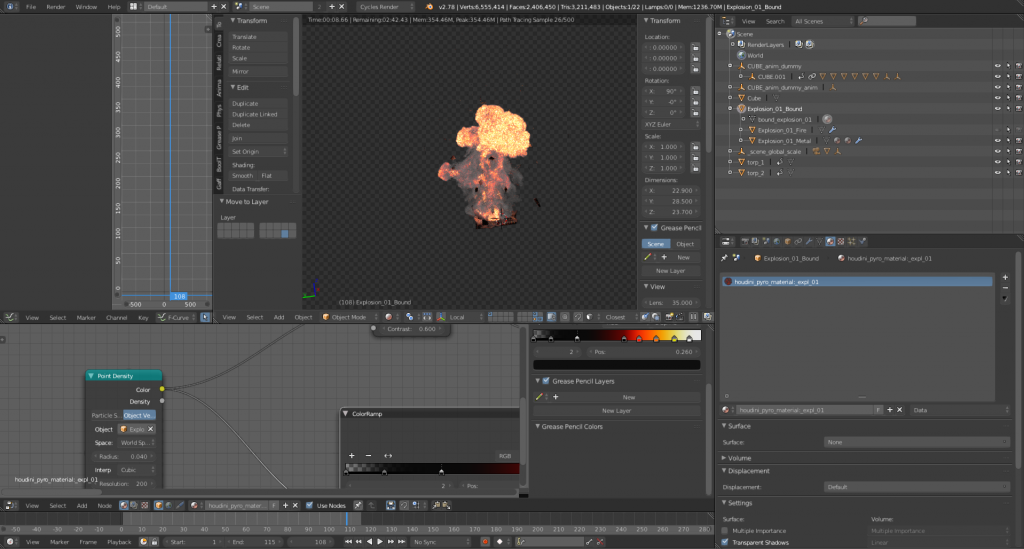 If you like the Trailer and the Game please visit the following links: 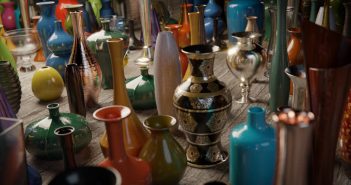 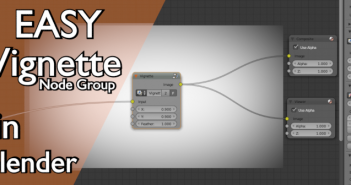