Ray Mairlot posted this very cool Lego effect and I asked him how he did it.

I've been wanting to do this effect since seeing this video a few years ago, but this feature (using dupliverts on fluid) didn't seem to work for a few years:

More recently, when I saw a Houdini video I thought I would revisit the idea and found it seemed to work again:

The process is to do a standard fluid sim, add a remesh modifier set to 'blocks' and then turn on dupliverts for the fluid object (and parenting a 'brick' object to the fluid). That's basically it! Dupliverts gives great performance and remesh allows lower or higher resolution fluid depending on it's resolution. The material is just a gradient mapped on the 'brick' which changes colour depending on height.

The actual building effect at the beginning is a particle system and an 'Explode' modifier on a different object. An animated object defines the 'time' of when particles emit and the explode modifier makes sure the particles are invisible until emission (by unchecking 'Unborn' and checking 'Alive' and 'Dead' on the modifier). The reverse happens on the pile of bricks to the side so they disappear as the other ones appear.

If all that sounds confusing, a full tutorial will be up in a few weeks hopefully. 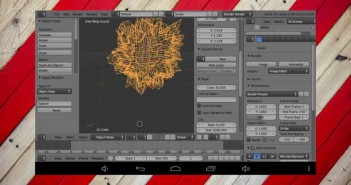 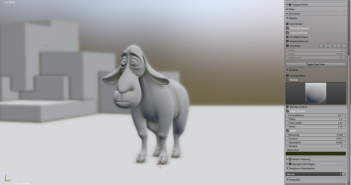 Next Article First Look: Depth of Field and Screen Space Ambient Occlusion in the 3D viewport