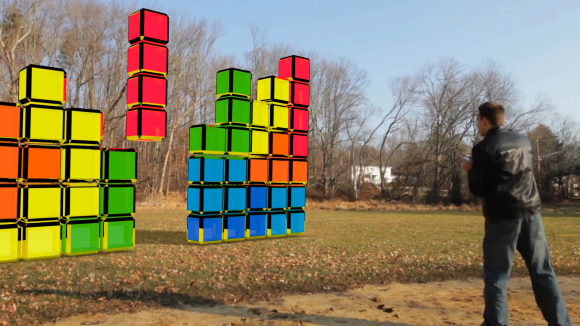 Some more tracker fun in this video by John Eagan.

I just wanted to share my first Blender VFX video and one thing I learned from it. After watching many Blender Guru tutorials, especially the one about camera tracking, I used Blender to track the shots and then texture, animate and shatter the Tetris blocks. My friend CJ modeled the blocks. After Effects was used to roto me (the actor) out and add the shimmer, debris, dust and shock wave to the end.

The camera operator, CJ used his steady cam instead of a tripod to get these shots which helped me immensely in tracking, but what I learned about the tracker in Blender 2.65 is that the default settings require there to be significant movement of the camera's physical position. So when my friend would look around but hold the camera relatively steady, the tracker would give me crazy results with 3D objects flying every which way. What fixed this was checking one setting that says “tripod motion.” Even though they were not tripod shots and the camera did move around slightly, it would usually come out with a better track with that setting checked. Just something to test if others out there are going through the same issues of unhappy tracks that I had.