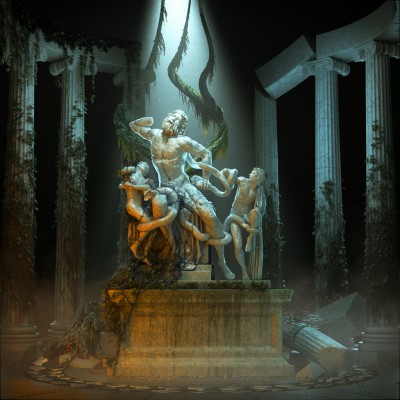 The statue of Laocoön was most likely built somewhere between between 27 BC and 68 AD, but was lost and discovered in 1506. BlenderMatt recreated it in Blender.

The story of Laocoön was the subject of a tragedy by Sophocles. Laocoön was a Trojan priest of Poseidon who, after attempting to expose the ruse of the Trojan Horse, was subsequently subject to divine execution (along with his two sons) by serpents sent to Troy across the sea from the island of Tenedos.

The figures are close to life-size (the group is a little over 6 ft 7 in in height) showing the Trojan priest Laocoön, and his sons Antiphantes and Thymbraeus, being attacked by the sea serpents. Pliny the Elder attributed the work to three Greek sculptors from the island of Rhodes: Agesander, Athenodoros and Polydorus.

In 1506 the statue was discovered in the vineyard of Felice De Fredis on the Oppian Hill in Rome. Whilst this surely involved more excavation than my image shows, I found it fascinating that such a great statue could be lost for so many centuries. With that in mind I decided to attempt my own version of the discovery of Laocoön (with plenty of artistic license!). This took a lot longer than I originally anticipated and owe many thanks to the numerous people who helped me with all the problems I encountered. Without that help I would never have seen this to the end - thank you all!

I will be posting some info about the making of this over on Blender Artists.