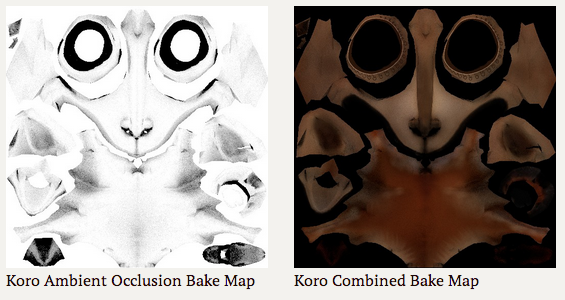 Dalai Felinto is working part time as a developer for the Blender Foundation. One of the projects he has been spending some time on is baking for Cycles. The process of baking stored lighting, color and other rendering information in UV maps and allows for great speedups further down the pipeline, or for example in real-time 3D content.

So far, baking has only been available for the internal renderer, but this custom Blender version gives you early access to this feature in Cycles.

Blender was the first 3d package outside of Sony to officially support OSL, and since November 2012 we can use OSL in a “Script Node” to create custom shaders. Blender uses OSL via Cycles. The “Script Node” was implemented by Brecht, Lukas, Thomas and … me (:

Thus, with baking support in Cycles we get for “free” a way to store the shaders designed with it. In the following example you see the Node Cell Noise sample script from OpenShading.com. So even if your game engine has never heard of OSL, you can still benefit from it to make your textures and materials look more robust. How cool is that?

At the time of writing, only one unofficial build of this branch is available on GraphicAll, but with your help that could change :)