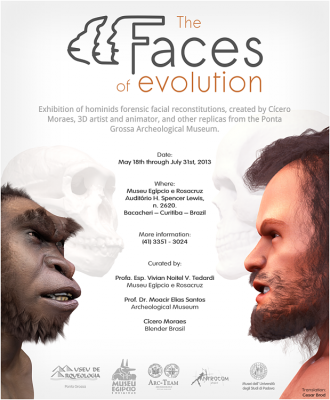 'Faces of Evolution' is an exhibition of reproductions of skulls. Blender played an important part in this project.

From May 18 to July 31, 2013, the Egyptian & Rosicrucian Museum in the city of Curitiba in Brazil (Auditorio H. Spencer Lewis, n. 2620), hosts the exhibition "Faces of evolution". Reproductions of skulls of hominids are supported by explanatory panels depicting the reconstruction of their possible aspect through forensic techniques.

The exhibition represents the culmination of a process that began several months ago with the reconstruction of the features of Alberto of Trento, made by Arc-Team and Cicero Moraes. The method used at the time, in which we developed original techniques suitable for the reconstruction itself, was used later in the Taung project.

The Taung project (born from the collaboration between Antrocom non-profit organization, an association of research and anthropological dissemination based in Rome, Italy; Arc-Team, a company based in Italy that operates in the field of cultural heritage; Cicero Moraes, a Brazilian expert in 3D modeling applied to the forensic context; Nicola Carrara, Museum of Anthropology of the University of Padua, Italy), was later presented to the conference of Young Italians Anthropologists held in Florence in September 2012, with particular reference to the reconstruction method and to the software we used.
(please see this previous article on BlenderNation)

The project, mainly due to the accuracy of the reconstruction of the features of hominids, has had wide coverage in the international media, among anthropologists and between figures from the open source world.

As a result, the research team was contacted by the archaeologist Moacir Elias Santos (Archaeological Museum of Ponta Grossa) and Vivian Tedardi (Egyptian & Rosicrucian Museum), who proposed the exhibition.

If you want to have more informations, please see the post published in ATOR, the Arc-Team Open Research Blog.