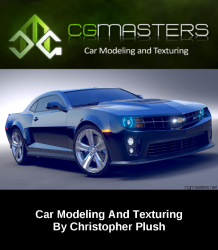 Now that it's the start of a new year, it's time for another review of Blender training products.

This time it is another CGMasters training video set created by Christopher Plush covering the topics of Car Modeling And Texturing.

Those that have seen my other reviews know about CGMasters and how they put out very high quality training materials. So when they contacted me asking if I would mind reviewing their latest creation, I was only too happy to, here's what I found.

When you purchase this product you have 2 different options for how you will receive it. You can either get it in DVD form or you can download it. I am reviewing the downloadable version, but there is no difference in content between the DVD version and the download version.

The download version was quick to download with my internet connection, so if you have a stable connection you should be okay downloading it. The download is large though, so be prepared.

Having downloaded all the files and extracted them from their archive, you are left with all the resources you need to get the most out of this training material. Included in the download are:

So all the things you will need to get started instantly with your learning and car modeling tasks are included and easily accessible.

You can access most of the files and resources directly from inside you web browser. If you do not want to watch the training materials in your browser you can access the videos directly in your media player of choice.

The web interface is clean and easy to navigate and should make accessing the resources very simple.

While reviewing the videos, they were very clear and very well encoded. All the videos and other resources were very well organised and easy to find when I needed them.

The video files are split up into many sections ranging from a couple of minutes to 35 minutes in length. Each video tries to cover a different aspect of the creation of the final car model (Camaro ZL1).

The start of the training video covers the basics of setting up Blender's user interface for the most efficient workflow when modeling the car. Christopher goes over some of the most important preference settings that he uses to make his job easier when carrying out the tasks required when modeling. He also goes over some basic performance suggestions which help to keep Blender working as smoothly as possible.

With the basics of Blender's interface and preference settings covered he moves on to a short explanation of some of Blender's new features and how you can most effectively use them. Specifically covered are Blender's BMesh NGON features, the Knife Tool use and Blender Bridging tool. Also covered was an effective way to make and fill faces. I found the explanation of Blender's Knife tool very interesting because I learned it could be used to Join edge together which I didn't know previously, I only knew about the J key. So in my case these basics really helped me.

Having covered some preliminaries of using Blender the training videos move on to the tasks required to start modeling of the car.

The first stage is setting up the Blueprint reference images which will be used throughout to accurately model the Camaro.

Christopher uses image planes for the display reference images for the front, side, top and back of the car. This method is very effective and allows him to display background references images at an angle, which he would not have been able to do if he had used Blender's default background 3D Viewport image display method.

Having setup the Blueprint reference images Christopher explains the different types of projection snapping and shrinkwrapping tools Blender has and how to use them in useful ways when constructing car body surfaces.

I especially enjoy watching him demonstrate how to cut holes in curved surfaces, a task which is often difficult to get right. He also demonstrates are very simple but effective way of modeling a car tire tread. Which is later used again to make a fully modeled tire tread. All of this done with very basic modifiers (curve, array and simple deform).

The remaining videos cover modeling the different parts of the car, All the visible parts that make up the car are modeled, even less visible things like mufflers and break dics of the car are modeled to a very high standard, while keeping the amount of vertice, edges and faces to the minimum needed to get the job done.

Each different section of the car has its own separate video. Allowing you to focus on a speific part of the car modeling if you want to.

In the process of modeling the car a lot of Blender's different features and tools are covered. So if you didn't know how to use them before starting watching, you will by the end of watching the videos.

Once the modeling of the car is almost finished Christopher goes over the car one more time fixing any mistakes and explaining why he is doing so. This helps to show how you can fix issues you may encounter when modeling and some of the solutions.

After the actual modeling of all the car parts is completed, the tutorials move on to texturing the finished car model. Giving it an effective looking car paint shaded look using Blender Internal's Materials and Material Nodes system. Blender Cycles is not used to do the texturing and shading of the car, but the end result does not suffer from this.

The next topic covered is Studio setup, for lighting and background image setup, and getting Blender to create clay renders of the final car model.

After the various studio setup tasks such as lighting, background, render settings, and world settings are covered, final post processing effects are covered.

This involved the compositor. The video tutorials for this part of Blender were short but effective and helped to give the final renders of the car more visual appeal.

I couldn't see any real problems or missing topics. Some may argue it would have been better to use Cycles to do the shading and texturing but I think in this case Blender Internal was all that is needed, as the end result would not have looked any better in Cycles.