While we're all awaiting the release of Tears of Steel later today, let's take a look back at the five previous projects.

As an additional goal, the Blender Institute actively promotes the concept of Open Content. By offering not only the final movies, but also all the production assets under a Creative Commons license it is one of the strongest advocates in this area. A good example of its impact is in the HD video industry, where the Blender Institute movies are commonly used as demo material. Sintel has even been been re-created on a 4K resolution for this reason.

'The world’s first open movie', a dream-like and surrealistic story about Proog and Emo who are traveling through 'the Machine' - a hostile and ever changing environment. Proog tries to explain the nature of the Machine, but Emo rejects it.

We follow a day of the life of Big Buck Bunny when he meets three bullying rodents, Frank (the leader of the rodents), Rinky and Gamera. The rodents amuse themselves by harassing helpless creatures of the forest by throwing fruits, nuts and rocks at them.

After the deaths of two of Bunny's favorite butterflies, and an offensive attack on Bunny himself, Bunny sets aside his gentle nature and orchestrates a complex plan to avenge the two butterflies. (Quote from Wikipedia)

Yo Frankie! Is the only interactive Open production. The platform game is based on the world and characters of Big Buck Bunny. It was a collaboration between the Blender Foundation and Crystal Space, which is why the game is available for download for two game engines. 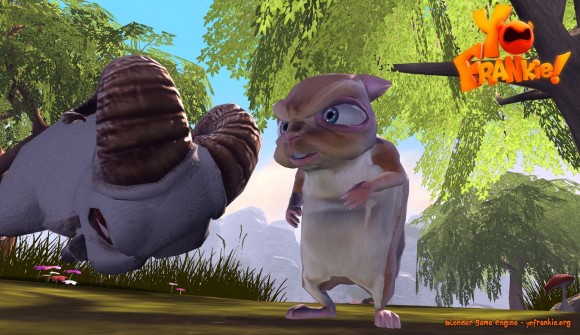 The target for Sintel was to make an 'epic' movie, which is reflected in the elaborate landscapes, the huge city and the large number of characters. Sintel and Big Buck Bunny are regarded as the 'flagships' of the Blender community - awe-inspiring, high quality productions that leave many viewers in surprise when they learn that they are created with Open Source software.