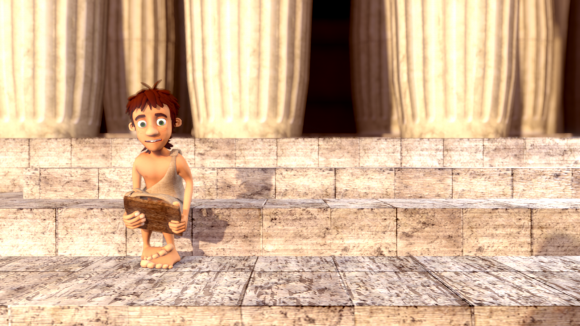 Hi, I would like to talk about the Reibe Studios and our second short movie, X-Gift:

Reibe Studios was born 3 years ago, by an idea of our teacher and productor Giovanni Gallo (who teach Computer Graphics) who wanted to realize a group of people to create a short movie made entirely in blender. The idea that he wanted to realize was a "working simulation" that could mix two kind of students, the nerdy-part formed by students of "Computer Science" and the creativity-part formed by students of "Arts", both from Catania, in Sicily (Italia).

The first project we realized was "Froggy is Back" and since 2 years we have worked to our second short movie, X-Gift. We would like to tell a story of a young poor boy in ancient Greece, Timios, who has a dream about a family (that he doesn't have...), and he hope that Zeus could realize what he want... So...enjoy the movie!

P.S. We are already working to fix some animations/assets and we would like to know what you think about the entire movie, we appreciate all kind of critics that are costructively (for our skills and to do better and better next time!).

Another one thing: as soon as possible (we think when we fix all the thinks...), we will post on BlendSwap the entirely assets/objects/characters that we made for this movie.