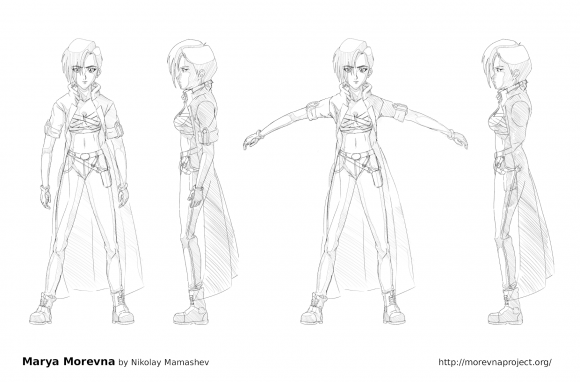 The Morevna project needs a hand with the animation of their main characters.

Morevna Project is an effort to create free-culture anime with free software, it was covered by BlenderNation a few years ago. Much like in case of open movies by Blender Institute, the point of Morevna Project is giving a testing and improving open source tools. Unlike the other free-culture films in the works, it focuses on different technology: most of Morevna Project will be 2D-animated, using Synfig, but the Blender is extensively used for 3D effects animation. So Morevna will expand the envelope of film tools and assets for open movies considerably. All the project sources are already open to the public and available in the git repository and wiki.

The project has a full-feature script published based on a Russian folk tale called "The Beautiful Queen Marya Morevna" - except it's a cyberpunk retelling of the story. The closest goal of Morevna Project team is producing Demo animated short which is planned to be released in November, this year.

Right now, while working hard on 2D animated stuff, Morevna Project is looking for help from Blender community - they need a 3d models of two main characters to be used in some important scenes.