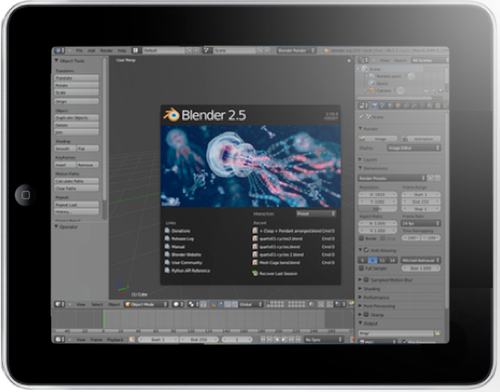 The squidifier sent as a message that it is now possible to run Blender 2.5 through Bochs on the iPad. Of course without a keyboard Blender might be hard to use but this at least shows a way to actually bring the software to run on the iOS device as a first step.

Here is the tutorial:

Requirements:
A jail broken iThing with 4gB of free space
An Internet connection good enough to download 3.6gB of files.
Wifi (in order to ssh)

Step one:
Add these repos to cydia:

Step 3:
Start bochs and check windows 95 works on iThing, if it does not, this will probably not work on your iThing.

Step 4:
Ssh into your iPhone/iThing

Step 5:
Add a folder in the same directory as the win95 folder (in documents) called whatever you want, e.g. Linux or blendlinux

Step 6:
Transfer the artistx Linux .iso over into your blinux (blenderlinux as I like to call it) folder.

Step 7:
This is the tricky bit, you have to duplicate and modify the os.ini file from the windows 95 folder into your blinux folder and edit it. Someone has made a nice tutorial for this on YouTube, although it only half worked for me.

Step 10:
You have Blender on your iThing!