Listen up serious Blender users. I think this is one of the most professional rotoscoping demonstration done with Blender.

Good Spirit Graphics is proud to announce a 6-part 3-hour tutorial series for Blender. This tutorial series explains, in step by step detail, how to use blender for rotoscoping and visual effects. If you don't have Affter Effects, or Nuke, these tutorials will get you started with VFX. Follow along by downloading the same source footage from Adobe that was used in the tutorials.

Blender is attracting new users all the time, and some of these users have no background with 3D software. So to accommodate these users, this tutorial series requires no prior knowledge of Blender. However, even seasoned Blender users should learn a lot from the series, including some little known bugs. 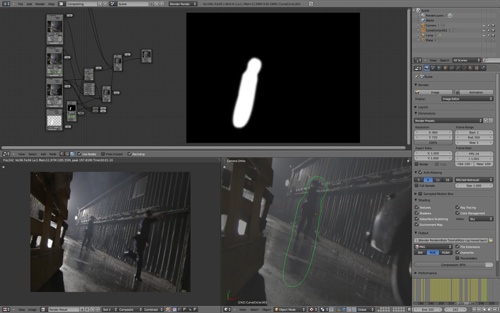 The reviews are in:

From BlenderArtists:
- Richard Marklew: "There are times when you have a benchmark for a subject. This is it for rotoscoping in blender."
- Zeffi: "Some of the most calm, collected and purposeful tutoring I've ever watched."
- 3pointedit: " I'm just watching now and it's a great series! You have a cool clear delivery and a well thought out presentation."

From CGSociety:
- tetha: "Make more tutorials Terrachild, you have a great calm vibe."
- uncle_frankie: "brilliant videos - I'm currently learning about compositing and using Nuke. it's really useful to see how Blender does it"
- Plasmasolutionsa: "Christopher, I just stumbled across your tutorial series...it's an outstanding work! I personally like very much that you don't just touch the tip but instead you're going deeper into aspect ratio and a vfx point of view to blenders interface...really great work"