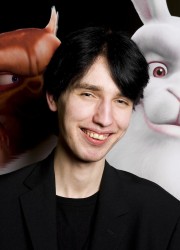 I bow deeply before you, Brecht, and I wish you all the best in your new job. Thank you!

After three years of more than excellent services at Blender Institute, Brecht has decided to move on with his career and accept per september a position as software architect at Refractive Software in Belgium, which is close to where he lives. He will be working on the very promising Octane renderer, which caused many heads to turn at the last Siggraph expo.

Brecht's position will be filled by Campbell Barton, who will start working full time on Blender development, coder support, bug fixing and Python design - working from his home in Melbourne Australia. Well he did this mostly already, but now will be official and paid! :) Currently Diego Borghetti is working half time for the Blender Foundation on bug tracker support. This month I'll also know more of our financial scope, but quite likely another full timer can be recruited then for support & fixing.

It's been a great pleasure and honour to have Brecht work for us in the past years. He's done tremendously important contributions, for which I certainly will miss him. Luckily Brecht will remain involved with Blender, also as a developer in his spare time.

I wish Brecht all the luck and success with his new job, and welcome Campbell to the team!

In a reaction on the bf-committers maillist, Brecht writes:

Here's a few more details on the changes. My contract at the Blender Institute was until the end of this month, and I've been contemplating a bit what I should do in the future. It's been great working here, and I'm very grateful to Ton, he gave me a lot of freedom to work on what I wanted to work on, and I've learned a lot from him in the past years. I feel like after 3 years I need a different challenge, just doing something a bit different, so I started looking around and found a job at Refractive Software, with the advantage that it's closer to where I live.

I'll still be involved in Blender development, but again in my spare time as I did before I started working here. There's no non competition agreement or anything like this. I'll still work on getting Durian features merged into trunk, getting 2.5 finished, and other things after that, there's still many areas in Blender I'd like to improve in the future. In terms of internal render engine development however I won't be involved much anymore, focusing more on external render engine integration, but I'll of course try to get render branch features merged and help others understand how it works.

Thanks to everyone who's helped out with development/documentation and supported open movie projects. Further, I'll still be on IRC, mailing lists, committing to svn, so no massive change there.