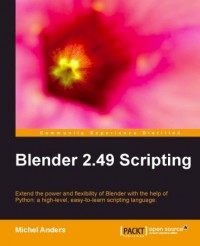 Terry Wallwork reviews 'Blender 2.49 Scripting' by Michel Anders. Many people still use 2.49 in production environments where you can't work with feature-incomplete alpha software (myself included ;-), so yeah, I think this is a good idea.

A few days ago I recieved an email from Packt Publishing informing me of their new Blender 2.49 Scripting book. I was very interested in reading this book as there are very few Blender books that cover the scripting aspect of Blender 2.49 and Python. So I navigated my way to the packt publishing website and ordered myself the ebook version. They were having a special at the time and I ended up getting a full color ebook for less than £9. If nothing else the price is extremely impressive.

The author is Michel Anders, known as varkenvarken on Blender Artists forum. He is an extremely talented Blender Python scripter and has written many very useful scripts for Blender. Knowing who is behind this book explains a lot about the way this books is constructed.

The teaching aproach taken, is to present a series of tasks that need to be achieved and then present sections of scripts that demostrate the most important concepts and Blender Python code, to allow the tasks to be carried out.

At the beginning of the book a basic explanation of some of the terms and concepts are gone over and a few very simple Blender python commands are demonstrated to do the equivalent of a Blender Hello World script. This beginning part of the book is the only part that really can be classed as beginner level, everything after this has a much steeper learning curve.

Many of the scripts written by Michel are very technically advanced scripts, the same also holds true for this book. Most of the scripts and techniques described within require a very good level of understanding. I debated with myself as to weather it is an Intermediate/Advanced level book, but one thing is certain, if you are a beginning Blender user and your Python knowledge is beginner level, you will struggle to get much from Michel's latest work. I think that to get anything out of this material a very good understanding of Python, Blender and Mathematics (especially vector math and 3D related mathematics) will be required.

Assuming you have the requesite knowledge all the bases of using Blender through Python scripting are covered, for example, setting up materials, ipo manipulation, texture setting, texture nodes and so on. But again very simple things are not covered. To me it seems that it is assumed that you will just read the Blender Python API docs for the very simple things such as how to do rotations and scaling on objects, deleting and adding vertices, etc. You will have to be prepared to get a lot of information from the scripts supplied rather than be spoon fed information.

So if you are very knowledable with Blender and Python you will likely find that this book is very handy as it covers ways of scripting and leveraging Blender Python scripting to do some very clever things. I do think it would have been very helpful to have a less steep learning curve but that's a matter of my personal taste.

I am not a Python expert and so this has probably affected my ability to properly appreciate this book, that said I can see that a lot of time and effort has gone into putting this book together, especially given thw fact the Python scripting books for Blender are so few and far between.

This book would of been much more relavent if it have been released a year or 2 earlier. Still if you're used Blender 2.49 and need an advanced Blender scripting book, you now have one to read.

I really hope Michel does a Blender 2.6 version when it comes out, and maybe makes it slightly more targeted at beginners and experts, so my head doesn't hurt quite so much.

Excluding the fact that I am not smart enough to fully get this book, excellent work Michel.