The following video interview was made by the Netherlands National News Agency. I think Ton says some interesting things in there about the movie that I hadn't thought of before. It's also a nice chance to get a peek at his workplace where all his Blender work takes place! The interview is in Dutch so I wrote a translation; it shouldn't be too hard to follow.

Shrek, the Incredibles and Ice Age: Animation movies are very popular at the moment.

Ton Roosendaal has proven that creating such a movie doesn't have to cost millions. Together with experienced video artists from the Netherlands and abroad he made this short animation movie, Elephants Dream.

It didn't require extremely expensive studios nor an army of computer specialists to create these images. Roosendaal used his 3d design tool Blender for this job. Blender is free and can be downloaded from the internet, just like the movie. 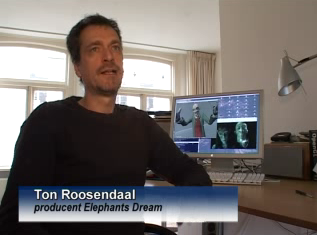 Everyone can show it on TV, you can cut it to pieces and re-edit. But that's not all: the entire database and all the technical files of the studio have been made public so you can recreate the entire movie and add new scenes etcetera.

Although the movie shows great animation skills, it also receives much criticism. The most often heard remark is that the storyline of the movie is unclear. Roosendaal is not worried about that: everyone can interpret the movie in his own way.

Of course, people think 'Oh, this is a free movie and I can download it, so it's probably a funny Tom and Jerry like creatures that do funny things.'

No, it is actually a very difficult movie. It is about people who create their own reality and because of that get into a conflict with each other.

Not only the content, but also the title of the movie is mysterious: 'Elephants Dream'. And there's not a single elephant in the movie. 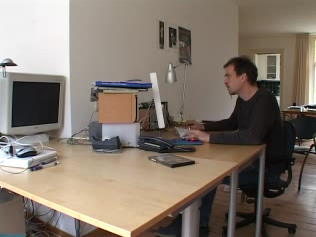 Our first title was 'Machina' (machine). After a while we thought it was boring and then I told the crazy story of Dutch parents who make up a crazy story for their children when they go to bed that they never know how to finish. Instead, they simply say 'and then came an elephant with a large trunk and he blew the story away'. That's how elephants came into the discussion and someone mentioned 'Elephants Dream'. And that became the title.


No, that's not important to me at all. Of course Hollywood is very interesting and it's sexy to do business with them, but it's not really my goal to get Blender in Hollywood. What I hope to achieve is to get Hollywood in Blender.

Blender is a very democratic product that is downloaded by millions of people every year, and we would like those people to get access to the technology and the tools that are used in Hollywood.

Roosendaal and his team worked on the movie for seven months. Elephants Dream cost € 150,000 to produce and was financed by the presale of the DVD. You can download the movie for free from ElephantsDream.org